Buildah is a tool for building OCI-compatible images through a lower-level coreutils interface. Similar to Podman, Buildah doesn't depend on a daemon, such as Docker or CRI-O, and it doesn't require root privileges. Buildah provides a command-line tool that replicates all the commands found in a Dockerfile. This allows you to issue Buildah commands from a scripting language, such as Bash.

This tutorial shows you how to:

In this tutorial, we assume basic familiarity with Docker or Podman. To learn about Podman, see our Podman for Docker Users tutorial.

The following example output shows that Buildah is installed on your computer:

If Buildah is not installed, follow the instructions from the Buildah Install page.

Then, enter the following command to check if Podman is installed on your system:
podman version

The following example output shows that Podman is installed on your computer:

Refer to the Podman Installation Instructions page for details on how to install Podman.

Then, use the following command to see if Docker is installed on your system:

The following example output shows that Docker is installed on your computer:

For details about installing Docker, refer to the Install Docker page.

In this section, you'll use Buildah to package a web-based application as a container, starting from the Alpine Linux image. Then, you'll run your container image with Podman and Docker.

Alpine Linux is only 5 MB in size, and it lacks several prerequisites that are required to run ExpressJS. Thus, you'll use apk to install these prerequisites.

Enter the following command to create a new container image based on the alpine image, and store the name of your new image in an environment variable named container:
container=$(buildah from alpine)

☞ Note that, by default, Buildah constructs the name of the container by appending -working-container to the name:

You can override the default behavior by specifying the --name flag with the name of the working container. The following example creates a container image called example-container:

The Alpine Linux image you just pulled is only 5 MB in size, and it lacks the basic utilities, such as Bash. Run the following command to verify your new container image:

The following output shows that the container image has been created, but bash is not yet installed:

To install Bash, enter the buildah run command and specify:

Similarly to how you've installed bash, run the buildah run command to install node and npm:

You can use the the buildah config command to set the image configuration values. The following command sets the working directory to /usr/src/app/:

To initialize a new JavaScript project, run the npm init -y command inside the container:

Create a file named HelloWorld.js and copy in the following JavaScript source code:

To copy the HelloWorld.js file to your container's working directory, enter the buildah copy command specifying:


☞ You can copy a file to a different container by passing the name of the destination directory as an argument. The following example command copies the HelloWorld.js to the /temp directory:

To set the entry point for your container, enter the buildah config command with the --entrypoint argument:

At this point, you're ready to write the new image using the buildah commit command. It takes two parameters:

☞ If the provided image name doesn't begin with a registry name, Buildah defaults to adding localhost to the name of the image.

Running Your Buildah Image With Podman

To run your image with Podman, you must first make sure your image is visible in Podman:

The following example output shows the container image created in the previous steps:

Run the buildah-hello-world image by entering the podman run command with the following arguments:


Use the podman ps command to see the list of running containers:

To see the running application, point your browser to http://localhost:3000. The application should look as shown in the following screenshot: 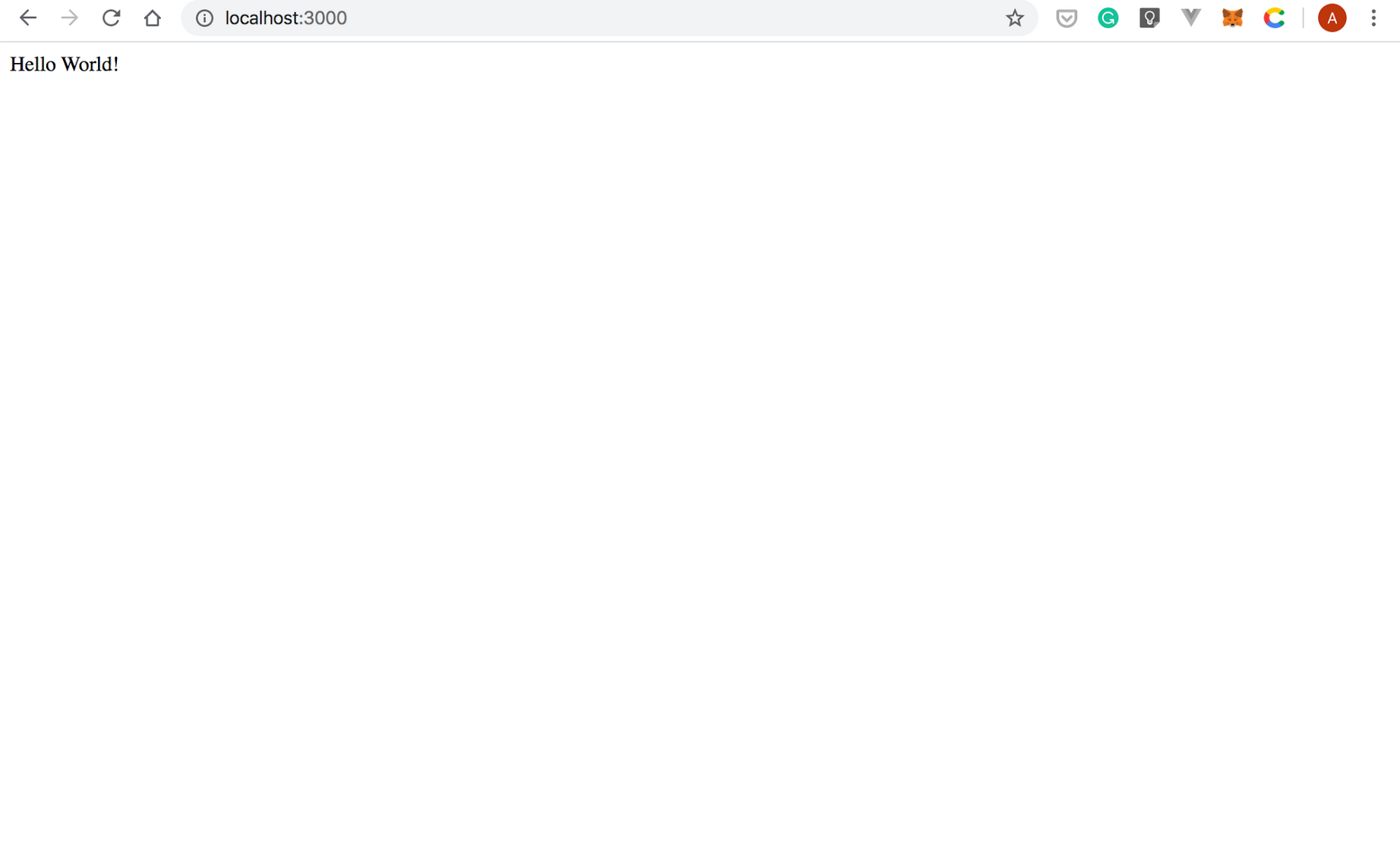 Now that the functionality of the application has been validated, you can stop the running container:


Running Your Buildah Image With Docker

The container image you've built in previous sections is compatible with Docker. In this section, we'll walk you through the steps required to run the buildah-hello-world image with Docker.

The following example command uses the docker-daemon transport to push the buildah-hello-world image to Docker:

List the Docker images stored on your local machine:

After a few seconds, enter the docker ps image to display the list of running containers:

To see the running application, point your browser to http://localhost:3000. The application should look as shown in the following screenshot:

Stop the running container with:

Package a Web-application as a Container Starting from Scratch

With Buildah, you can start from an image that's basically an empty shell, except for some container metadata. Once you create such an image, you can then add more packages to it. This is useful when you want to create small containers, with a minimum number of packages installed. In this section, you'll build the HelloWorld application starting from scratch.

An empty container image doesn't have bash, yum, or any other tools installed. Thus, to install Node and Express.JS on it, you'll mount the container's file-system to a directory on the host, and then use the host's package management system to install the required packages.

If you're running Buildah as an unprivileged user, mounting the container's file-system will fail unless you enter the user namespace with the following command:

To start building from an empty container image, enter the buildah from command, and specify scratch as an argument:

☞ Note that the above command stores the name of your container image in the container environment variable:

Issue the following buildah mount command to mount the container filesystem to a directory on the host, and store the path of the directory in the mnt environment variable:

Use the echo command to see the name of the directory where the container filesystem is mounted:

You can check that the container filesystem is empty with:

Use the hosts' package manager to install software into the container. Enter the yum install command specifying the following arguments:

Note that the above output was truncated for brevity.

Clean up the temporary files that yum created as follows:

Validate the functionality of your container image. Enter the following buildah run command to run bash inside of the container:

You can issue a few commands to make sure everything works as expected. Once you're done, enter the exit command to terminate the bash session.

Enter the following commands to move into the directory where you mounted the container's filesystem, and then download the Node.JS installer:

To extract the files from the archive file and remove the first component from the file names, run the tar xf command with --strip-commponents=1:

To make sure everything works as expected, use the buildah run command to run node inside of the container:

Now that everything is set up, you can install Express.JS and create the HelloWorld project. Follow the steps from 4 to 9 from the "Build an Express.JS based Image from an Existing Image" section.

Once you've finished the above steps, unmount the container filesystem:

You can use the buildah inspect command to retrieve more details about the buildah-demo-from-scratch container image:

The steps for running the image are similar to the ones from the "Running your Buildah Image with Podman". For the sake of brevity, those steps are not repeated here.

Package a Web-application as a Container Starting from a Dockerfile

Create a directory called from-dockerfile and then move into it:

Use a plain-text editor to create a file called Dockerfile, and copy in the following snippet:

Create a file named HelloWorld.js with the following content:

Build the container image. Enter the buildah bud command specifying the -t flag with the name Buildah should apply to the built image, and the build context directory (.):

Point your browser to http://localhost:3000, and you should see something similar to the following screenshot:

Stop the container by entering the podman kill command followed by the identifier of the buildah-from-dockerfile container (dbbae173dca0):

Use Buildah to Modify a Container Image

With Buidah, you can modify a container in the following ways:

Mount the Container and Copy Files to It

Run the following command to create a new container using the buildah-from-dockerfile image as a starting point.

The above command prints the name of your new container:

If you're running Buildah as an unprivileged user, enter the user namespace with:

Mount the container filesystem to a directory on the host, and save the name of that directory in an environment variable called mount by entering the following command:

You can use the echo command to print the path of the folder where the container filesystem is mounted:

Move into the /usr/src/app folder:

Open the HelloWorld.js file in a plain-text editor, and edit the line that prints the Hello World! message to:

Your HelloWorld.js file should look similar to the listing below:

Save the changes to a new container image called modified-container:

If you run the buildah images command, you should see both images:

Unmount the root filesystem of your container by entering the following buildah unmount command:

Run the modified-container image with Podman:

Enter the podman ps command to print the list of running containers:

To see the modified application in action, point your browser to http://localhost:3000:

Modify a Container with the buildah config Command

To see the list of your local container images, use the buildah images command:

In this example, you'll modify the configuration value for the author field. Run the buildah config command specifying the following parameters:

Enter the buildah inspect command to display detailed information about your container:

Note that that the above output was truncated for brevity.

As you can see, the author field has been updated:

Modifying a Container With the buildah copy Command

Use a plain-text editor to open the HelloWorld.js. Next, modify the line of code that prints the Hello World! message to the following:

Your HelloWorld.js file should look similar to the following listing:

Enter the following buildah copy command to copy the content of the HelloWorld.js file into the container's /usr/src/app/ directory:

The buildah run is different from the podman run command. Since Buildah is a tool aimed at building images, you can't use buildah run to map ports or mount volumes. You can think of it as similar to the RUN command from a Dockerfile. Thus, to test the changes before saving them to a new image, you must run a shell inside of the container:

Use the cat command to list the contents of the HelloWorld.js file:

Type exit to return to the host.

Save your changes to a new container image named modified-with-copy. Enter the buildah commit command passing it the following parameters:

Enter the podman images command to list the images available on your system:

Run the modified image with Podman:

Make sure that the modified container works as expected by pointing your browser to http://localhost:3000:

Use Buildah to Push an Image to a Public Repository

In this section, we'll show how you can push a Buildah image to Quay.io. Then, you'll use Docker to pull and run it on your system.

Login to Quay.io with the following command:

Buildah will prompt you to enter your username and password:

To push an image to Quay.io, enter the buildah push command specifying:

Pull the image from Quay.io using the docker pull command:

Point your browser to http://localhost:3000 and you should see something similar to the screenshot below:

In this tutorial, you learned how to:

We hope this blog post has been helpful and that now you know how to build container images with Buildah.