I’ve done quite a bit of work with Excel over the last few years, and I’ve found a couple of recurring problems when there’s missing or error data in ranges. I’ve had to work around this enough times that I thought it was worth sharing the solutions I’ve used.

Using AGGREGATE() Instead Of MIN()

Aggregate functions such as MIN() and SUM() often produce errors when they’re defined over a range with missing or bogus data. Although this is good, I often want to create a spreadsheet that operates over a fixed range, with computations based on that range. And I want to avoid complicated IF() or error-handling in long formulas, which make them hard to maintain and understand. In some cases, I’ve found that there’s really no way to solve the problems through that approach anyway. For example, if I use IFERROR() and output a 0 when there’s an error, the next set of cells that are derived from that output will divide-by-zero and it’s just turtles all the way down.

With the AGGREGATE() function, I have found a way to solve some of these issues. In return for using a function whose meaning and syntax is a little confusing, I can centralize all the mess into one place instead of smearing it all over the entire spreadsheet.

Here’s an example. I’ve entered some numbers in a range, and then filled the rest of the range with =LOG(0) to create an error. Then I’ve tried to take the MIN()of B6:B15 in cell C6. This results in an error, of course. 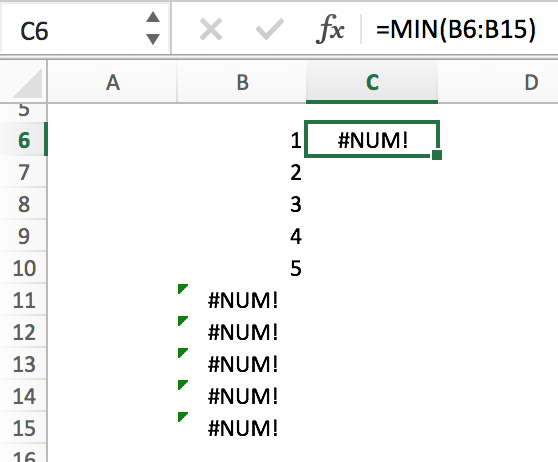 You can solve this with the AGGREGATE() function. You have to look up the documentation for the syntax and meaning of each set of options, but in short, you can specify an aggregate operation, extra arguments, and what to do if there are errors. Here’s how to get the MIN() result I want: 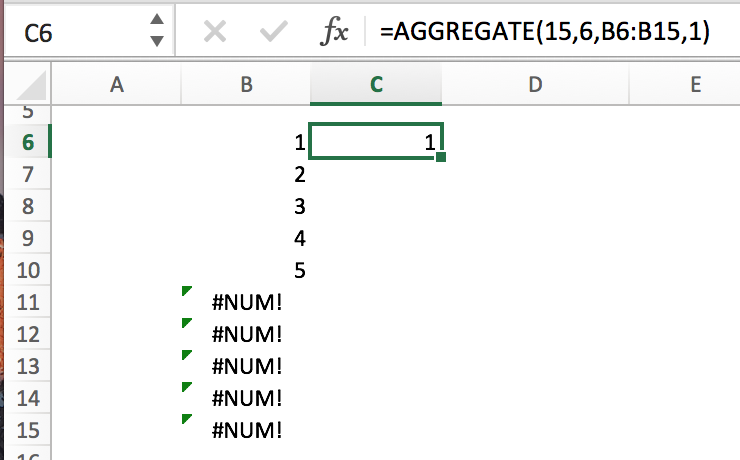 Sometimes I haven’t been able to work around all the challenges using AGGREGATE() and I’ve needed to specify a variable-sized range. This is possible with the OFFSET() function.

For example, suppose I want to do linear regression using the LINEST()function, but part of the range might contain errors or non-values. After typing in the formula in cell D6 and using the “array formula” command (Control-Shift-Enter), I get the following:

OFFSET() can help. It defines a range relative to a specified cell. You specify where the range begins, and how many rows and columns it covers. As long as the range contains a contiguous set of values (all the non-values are at the end), OFFSET() together with COUNT() can define a variable-sized range that adapts to the valid set of cells. COUNT() counts the number of valid values in the range, so you can use it as the argument to OFFSET() to set the size of the resulting range.

Here’s the solution in action on my example spreadsheet. I’m using OFFSET()to specify the first two parameters to LINEST(), defining the ranges C6:C10 and B6:B10.

The caveat with OFFSET() is that, unlike explicitly setting a range with cell identifiers, Excel won’t adjust the range when you do things like deleting rows from the middle of it.

Both of these workarounds introduce their own complexities: with AGGREGATE() you’re adding a more obscure syntax, and with OFFSET() you’re circumventing some of Excel’s features to help maintain and adapt your spreadsheet. In both cases, though, I’ve found that in some circumstances the net outcome is a simpler, more comprehensible spreadsheet overall.

Pic Credit (which has nothing to do with anything, but it’s pretty)