In a larger project with a multi-branching model, how do you manage the branching development model and enforce policies on various branches for a shorter development lifecycle and faster integration of work?

A good branching strategy leads the project source code towards consistent and secured data that is shareable and accessible by all collaborators in a shorter life cycle time.

It is necessary that you design your project model in a flexible way that is well administered for all the member roles and permissions.

There is nothing surprisingly new that I am going to be talking about; there may be git concepts and commands that you are already aware of, but my idea here is to leverage your thought process to make a better choice out of what you already know in Git.

Key takeaways from this article:

Git can act both as a centralized as well as de-centralized Version Control System (VCS) based on your project model. Git Distributed nature, as we know, is developed to facilitate a large number of contributors synchronously collaborating their work. The choice of an ideal git workflow model depends on the count of contributors, permission level hierarchy to the repository and branches, and also whether the chosen architecture model is centralized or de-centralized?

An ideal branching strategy, in practice, should declare a set of guidelines protectingthe branches against read and write permissions and restricting the unauthorized creation, deletion, forced pushes to the branches.

Whether you are maintaining your source code on a Linux Server or on a web-hosted, cloud-based source code control services, create your branches in a structured way and protect them for certain members and actions.

The branching model that I have taken from my previous real-time Airlines billing project is very simple to create and easy to follow. Different teams like the Administration team, Development, Testing, Operations, and the QA team worked together harmoniously contributing to the project source code. 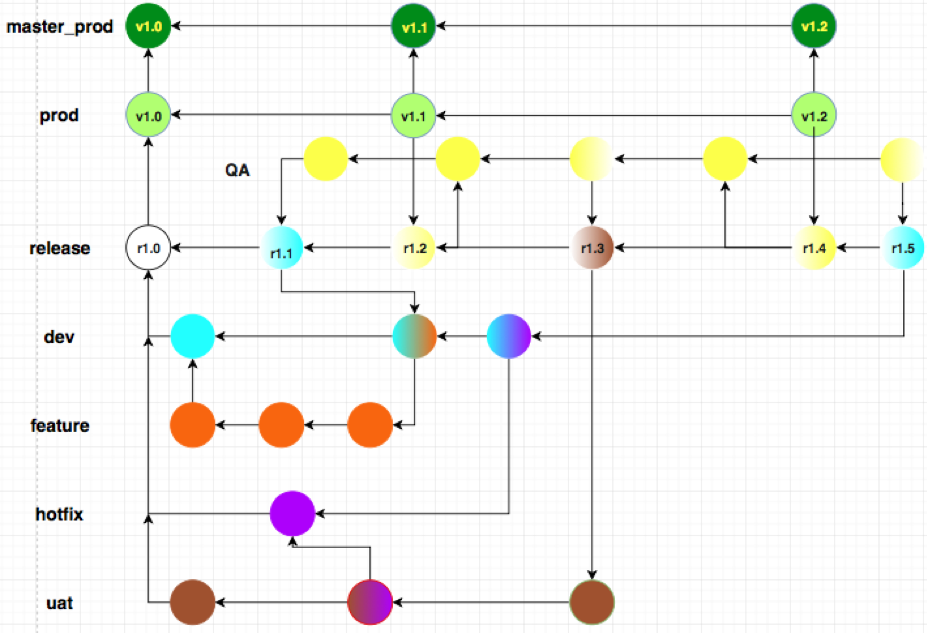 This approach lets you have only stable QA approved commits to be pushed from “release” branch into “prod” branch with the squash merge strategy. “master_prod” only accepts final commits of the source code from the “prod” branch.

Main code development happens on the feature and topic branches.

"master_prod" is the deployment-ready branch. A CD pipeline can be automated on this branch for continuous deployment in a DevOps environment setup.

I assume that you:

The general thought process would be as follows:

VCS and the Type of Model Architecture

The desired version control architecture depends on your project data, the administration set up, and the size of your team. In a larger project with many collaborators, it is necessary to have a flexible source code management (SCM) setup.

Assuming that you are already in favor of using Git as it is fast, distributed, flexible, has powerful branching and merging feature, as well as keep a good track record of history that lets you fix your mistakes and analyze the code in an organized way; Distributed Version Control System(DVCS) architecture would be your choice.

In a DVCS model, all the machines act as both “nodes” as well as a “hub.” However, in a Centralized Version Control System, each developer only acts as a “node” and the central server acts as a “hub”.

If your team comes from a background of earlier Centralized VCS such as Subversion or CVS or ClearCase the centralized workflow model of Git is most likely to attract you.

Another reason you would want to use Git as a VCS in a larger project is to maintain data integrity; as git would never allow you to overwrite each other’s work.

Each time a developer tries to push the new commits to a central repository that has already accepted commits from other developers since the last time you checked out; your push will be rejected as it won’t be a fast-forward merge. You have to fetch and merge others’ changes and then base your work on that.

This way many developers can work harmoniously contributing each one’s work through in-numerous branches without stepping onto each other's changes.

With this convincing note, we shall go ahead with the choice of a Git Distributed Version Control System(DVCS) for your project. It might be of interest to read git 3-tier architecture workflow to get a quick introduction of git workflow and understand git jargons used.

No matter what git workflow model you follow, a good branching strategy will take you closer to a stable model. Git provides a powerful flexible and stable workflow model to easily collaborate work among a huge team.

Git centralized workflow with a shared repository model provides you the same comfort zone as that of SubVersion, ClearCase or CVS Version Systems, while maintaining the data integrity among various contributors.

NOTE: While selecting a workflow model or a combination of models it is also important for you to consider the real scenario variables that will affect your live workflow.

The Dictator and Lieutenants workflow is going to be an ideal choice for a larger project.

The next step is to create different branches and assign roles to each branch. In case you would need a quick brush up on what are git branches and how to create and manage them; refer Git — Module 3: Branching and Merging

Depending upon the type of code development a branch is used for, branches may be briefly classified as:

Case 1: You could either version control your project in Git:

Case 2: Or Download the project source code from GitHub.

The code snippet shows how I created my branches:

Gitlab is an excellent cloud-based SCM and DevOps tool that provides an additional feature of protecting branches. Host your project on GitLab, which you could either import from GitHub or BitBucket or create a new project and push your source code from your Server machine using remote repository reference.

Gitlab allows you to define users as members with different project-level permissions.

Protect branches against permissions such as “allowed to merge” and “allowed to push” to the members.

NOTE: This is a private project with a maintainer and a developer; the maintainer has to personally give access to developers or a group as learned in Member role and permissions section. 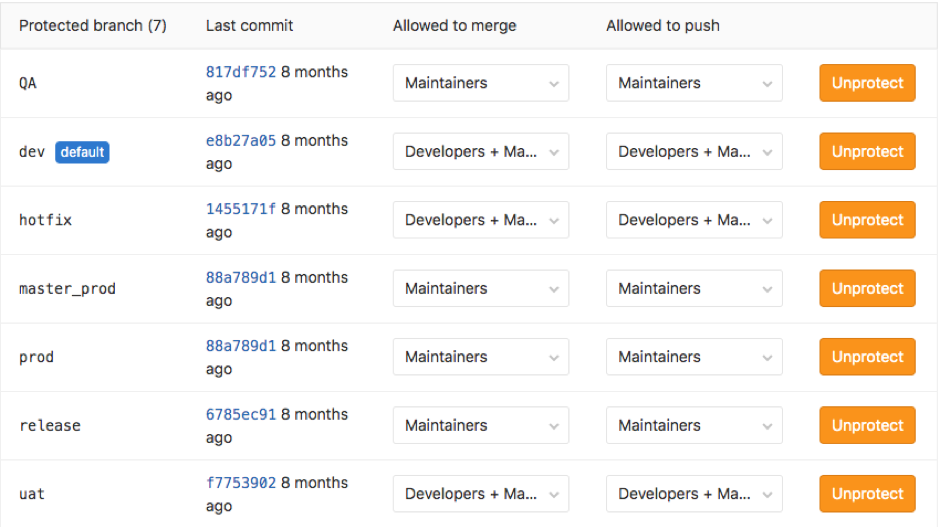 Respecting the same guidelines defined in the above sections, I have protected my branches.

Tip: Protected branches can only be deleted by the owner or maintainer of the project via the GitLab web interface.

The developer will fork the project and clone to his/her local repository. Note, how Developers have "merge" and "push" access only to some feature("dev", "uat" and "hotfix") branches; while stable branches are merged and pushed by Maintainers alone.

This gives a chance to review the merged changes from different developers and allow only tested code to be pushed into the stable branches.

FAQ: What if a developer tries to push to a protected branch which is set to accept merge and push request only from a maintainer?

Screenshots below shows how a 'git push' to a protected branch 'release' fails from a Developer's machine while a Maintainer can push to the same 'release' branch.

The code snippet highlights a clear message that says “You are not allowed to push code to protected branches on this project.”

Further Development of the Project

Every commit to 'prod' branch is tagged as a new project version with the command - git tag -a v1.2 -m 'Adding "uat"+"hotfix" branch code.'

5. Move code from “prod” to “master_prod” - 'prod' branch is just merged into the 'master_prod' branch using the normal git merge strategy which will always be a fast-forward merge as there is no development work on the master_prod branch; thus there are no direct commits on this branch and would never proceed ahead of “prod” branch zeroing the chances of any conflicts. Commands used -

Source code moves ahead in the following order on the branches:

"master_prod" branch progress as the final line of development with the tagged project released versions as v1.0 -> v1.1 -> v1.2 and so on...

The squash flag will pick up unique commits from the release branch and update the working tree and the Index area without actually making the commits.

NOTE: Remember release branch has merges from all the feature branches which will turn to be a messy and complex history, though easy to track from where the code changes came from. Once the merged changes are reflected in the working directory and the Index, commit them manually after reviewing and you get a single commit with code from all the branches.

This technique merges the new commits from the “release” branch without creating a new merge commit.

Typical Workflow on a Developer's Machine

Typical Workflow on a Maintainer's Machine

Git is structured just like a Linux-based filesystem that gives you a varied scope of customizing the way you want it to handle your source code. A flexible git workflow and a branching model strategy are all you need to accommodate a vast project and synchronize among contributors while managing the data.

Hope this article gave you a foundation to lay your work and a structured plan to version control your project source code. If you liked my writing, do check out my other posts for further reading ...

Published at DZone with permission of Divya Bhushan . See the original article here.