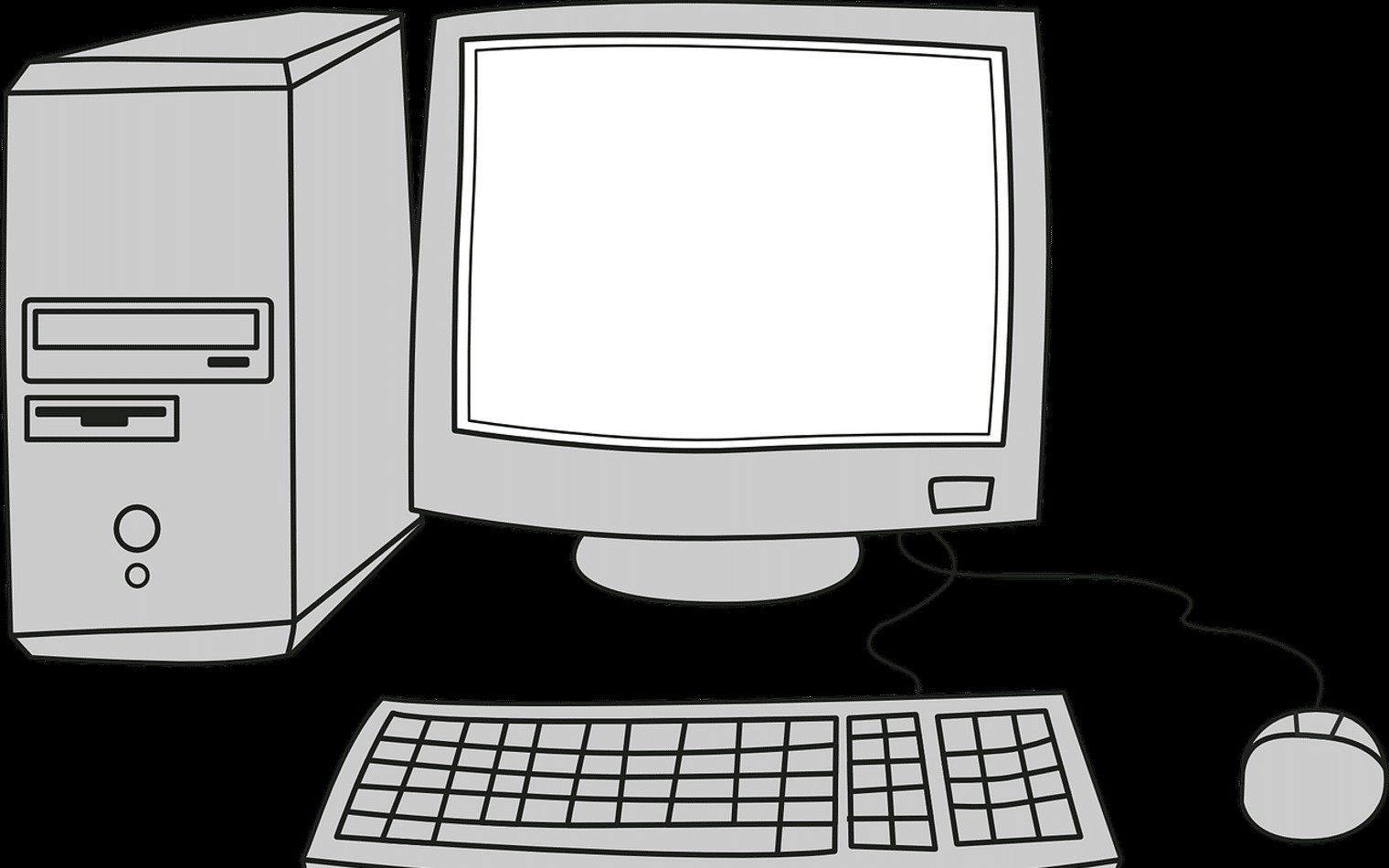 Computers in the 90s.

Ably recently had the pleasure of delivering real-time scoring and commentary updates to fans of the Laver Cup tennis championship, on behalf of Tennis Australia, for the third year in a row. During the event, I saw that Google embeds live score updates within search results, which is pretty nifty. It seems this first appeared in results sometime in 2016 and received an update for the .

You may also like: How to Use Poll Reference, For Each, and Properties Files in Mule

Being the curious engineer and realtime geek I am, I jumped into my browser dev console and started reverse-engineering the Google magic. Given the sheer scale of everything Google does, I was anticipating some off-the-wall micro-optimization work to squeeze out every last byte to minimize bandwidth and energy consumption. After all, Google has been pioneering the “light web” for years now, with initiatives like AMP, so I expected nothing less

So what did I find? Literally, a technology from the 90s.

In this blog post, I dive into why Google’s design choices are surprisingly bad in terms of bandwidth demand, energy consumption (battery life and unnecessary contribution to global warming), and ultimately sluggish user experience. At Google’s scale, I expected to see the use of common shared primitives such as an efficient streaming pub/sub API, or dogfooding of their own products.

Problem One: Overhead With a Bad Protocol Choice

Websockets, SSE (Server-sent Events) or XHR streaming are all good protocol choices for streaming updates in a browser. They provide a relatively low overhead transport to push updates as-they-happen from server to client. In addition, they are all supported in pretty much every browser used today.

Google strangely chose HTTP Polling. Don’t confuse this with HTTP long polling where HTTP requests are held open (stalled) until there is an update from the server. Google is literally dumb polling their servers every 10 seconds on the off chance there’s an update. This is about as blunt a tool as you can imagine.

In the graph below, over a five-minute window, you can see the bandwidth overhead of Google’s polling approach versus other more suitable protocols. 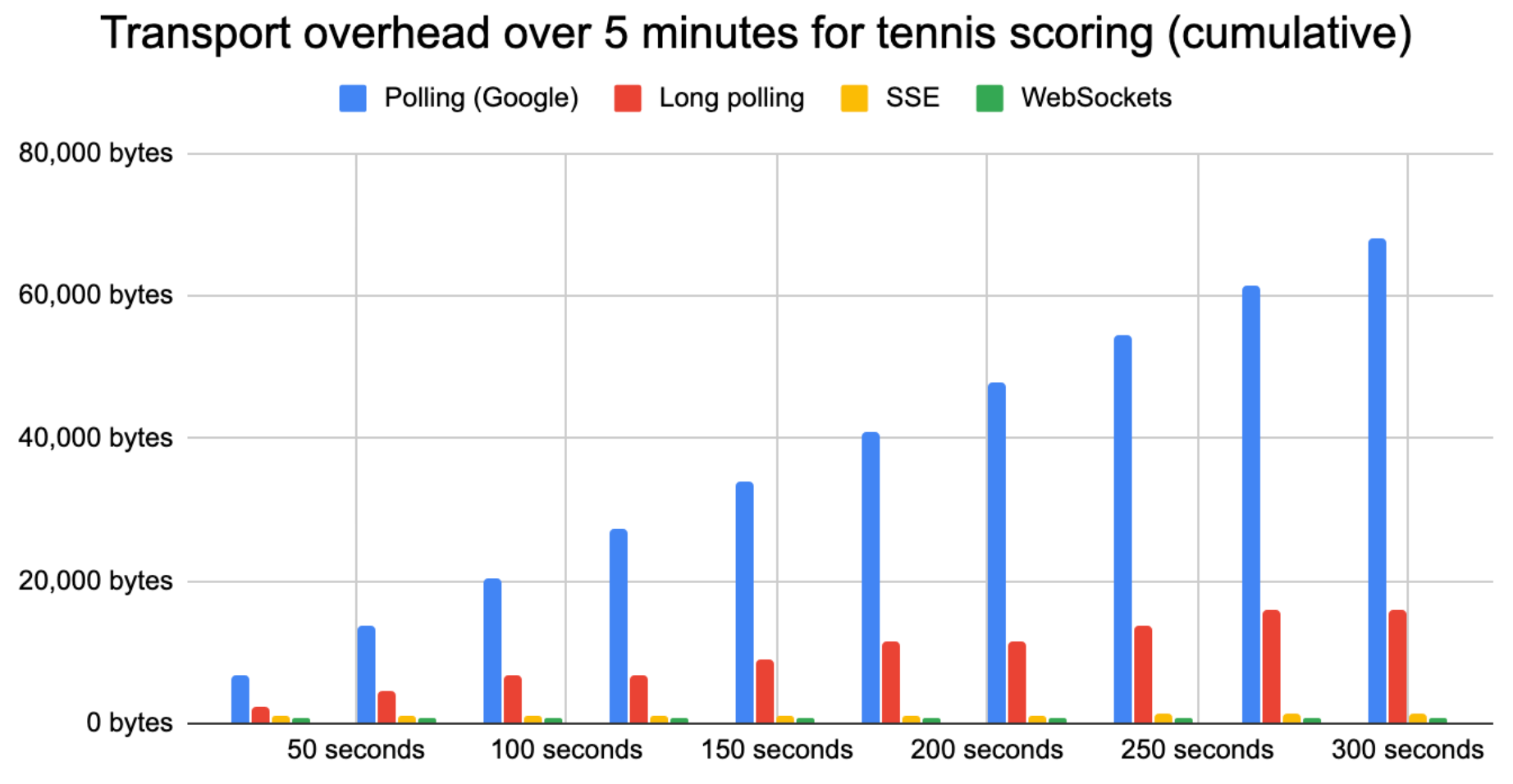 Google’s HTTP polling is 80x less efficient than a raw WebSocket solution. Over a five minute window, the total overhead uncompressed is 68KiB vs 16KiB for long polling and a measly 852 bytes for Websockets. See the spreadsheet used to generate this graph and the raw Gist with the protocol overhead details.

Let’s look at what is responsible for an 80x increase in overhead with Google’s HTTP polling:

Over 5 minutes, therefore, there are 30 requests made, each carrying 2.3KiB of overhead, resulting in 68KiB of total overhead.

Compare that with a long polling approach and the total overhead reduces to 16KiB, smaller by a factor of 4 (score updates come once every 45 seconds on average), and the user experience is better with significantly lower latencies as updates are pushed immediately.

Websockets and other protocols designed for streaming shift the dial much further. This is because the overhead needed per frame is a handful of bytes, and the only bandwidth overhead needed is in setting up the connection (upgrading from HTTP to Websockets). Over a five minute window, delivering on average 6.6 score updates, the overhead goes down to 846 bytes using 80x less bandwidth than polling. See an example WebSocket request.

If you look at the video capture of the live scoring above, you will notice that the progress indicator flashes every ten seconds, in response to a new polling request being sent to Google. Given scores update on average every 45 seconds, latency for score updates ranges from 200ms at best to around ten seconds at worst. 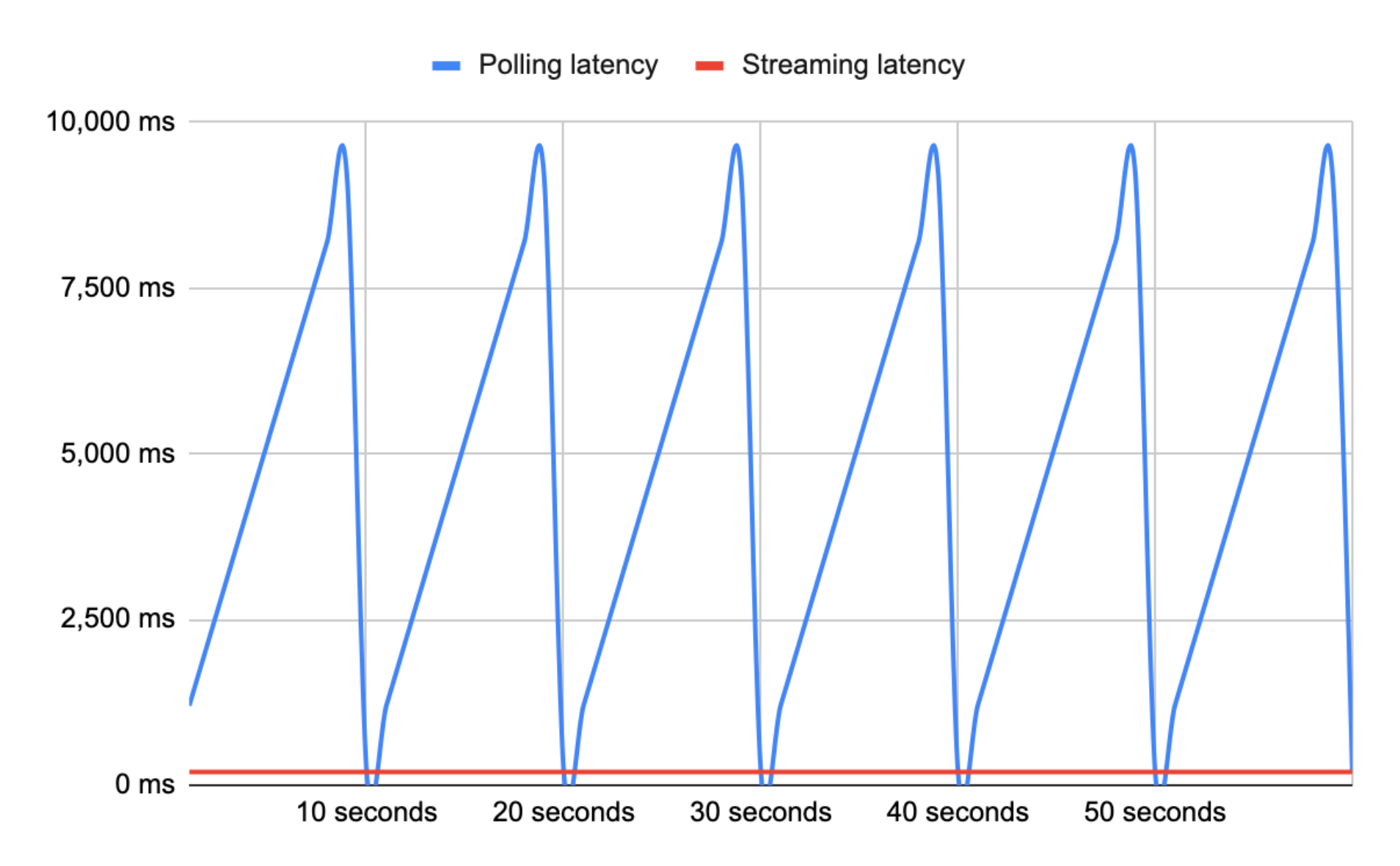 Websockets, SSE, XHR Streaming, and even long polling to a large degree, are all streaming transports and can thus offer a relatively fixed latency overhead of a few hundred milliseconds globally. The average latency for Google’s long polling solution is roughly 25x slower than any streaming transport that could have been used (5,000ms vs 200ms).

Given that polling is used and a request is made every ten seconds, I expected to see Google use some form of data synchronization protocol to deliver only the changes for each request. Google has in the past invested a huge amount in synchronization protocols, such as Operational Transformation with Wave, so they are no stranger to solving the incredibly hard problems of synchronizing state.

Instead what I saw once again shocked me right back to the 90s. Every request, every ten seconds, sends the entire state object. When averaged over a game, only ten bytes are changed every 45 seconds. To put that in context, 32KiB of unnecessary data is sent to every browser for each point scored instead of the ten bytes that have changed, representing a synchronization (or lack of) overhead of more than 3,200x the delta. 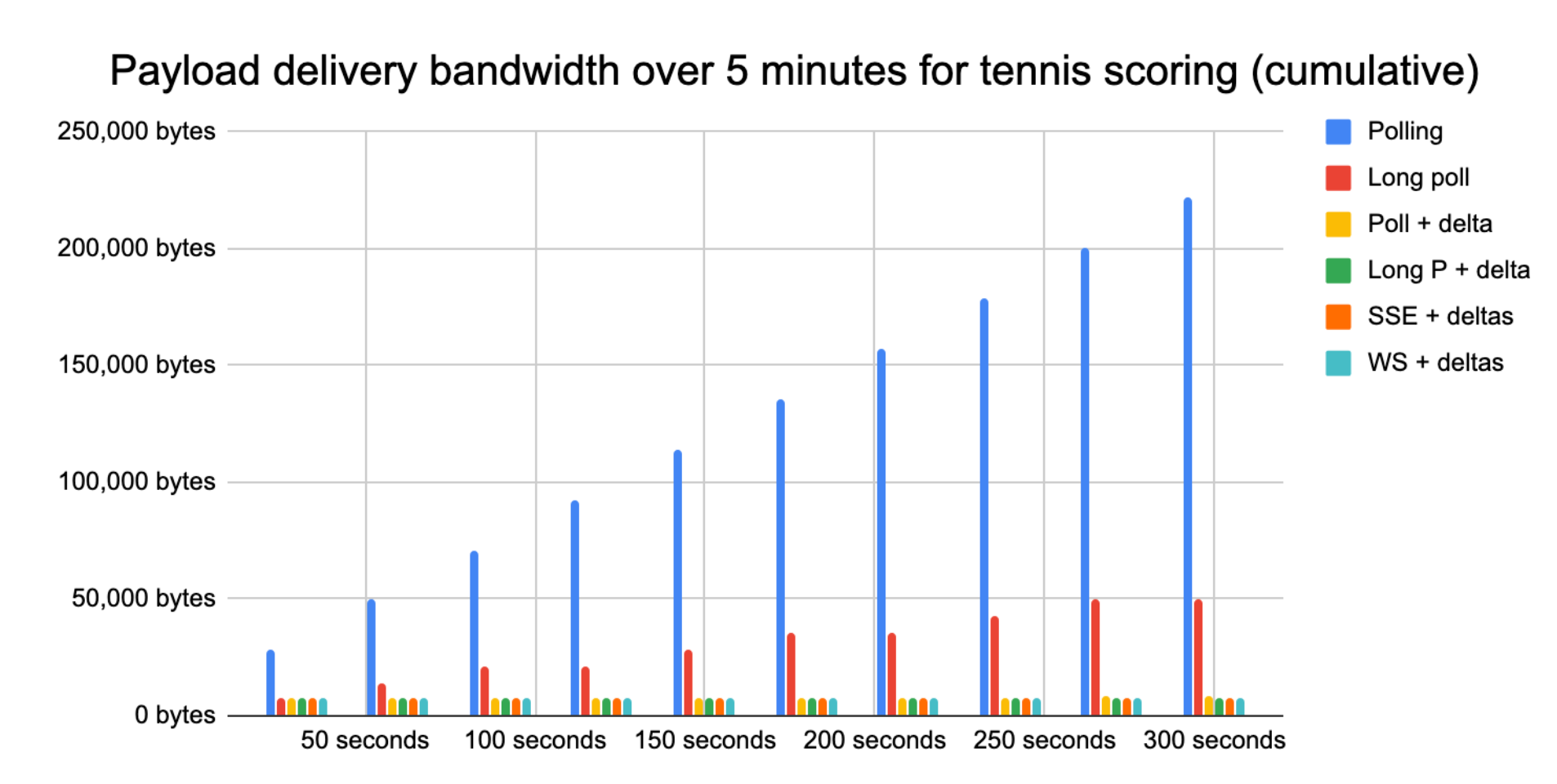 As we’ve invested a lot of time this year in introducing native delta support to the Ably platform, I was intrigued to see how deltas would perform in this real-world use case. We originally looked at using JSON patch as an obvious choice to get something out the door quickly, but decided against it due to inefficiencies and, of course, it only works for JSON.

Instead, we wanted to find an algorithm that was portable and efficient both from a compression and performance perspective (CPU cost generating deltas needed to be directly in line with the payload size). We found Xdelta to be the best fit along with VCDiff as our delta encoding algorithm.

As you can see in the graphs above, when applying deltas to polling, long polling, SSE or Websocket transports, we get practically no ongoing overhead to deliver scoring updates. Over a five-minute window, once the initial state is set up, Google’s polling solution consumes 282KiB of data from the Google servers, whereas using Xdelta (encoded with base-64) over a WebSocket transport, only 426 bytes are needed. That represents 677x less bandwidth needed over a five-minute window, and 30x less bandwidth when including the initial state set up.

You can see working examples using Xdelta on the Ably platform below:

If you would like to see the calculations for the graphs above, see this spreadsheet.

Wrapping This All Up

It’s hard to know why Google’s engineering teams haven’t invested in optimizing this aspect of their search results. Including the overhead and data synchronization inefficiencies, their approach requires 38x more bandwidth than a Websocket + delta solution, and delivers latencies that are 25x higher on average. Any company not operating at such scale would be forced to design and implement a more efficient method simply due to bandwidth costs.

I have a few theories on this:

Either way, it’s encouraging to see the internet becoming more realtime, and I applaud Google nonetheless for supporting ‘real-time’ scores in search results. I look forward to reviewing the optimization work they do in future iterations of this feature.

I’m Matt, the CEO, and co-founder of Ably. I am very interested in realtime problems, realtime engineering, and where the industry is headed. That’s the reason I co-founded Ably, which provides cloud infrastructure and APIs to help developers simplify complex real-time engineering. Organizations build with Ably because we make it easy to power and scale realtime features in apps, or distribute data streams to third-party developers as realtime APIs.

If you’re interested in chatting to me about realtime problems, distributed systems, or this article, please do reach out to me at @mattheworiordan or @ablyrealtime on Twitter.

Caveats When Reading This Article:

The Perils of Polling

Published at DZone with permission of Kieran Kilbride-Singh. See the original article here.