Developed as well as developing nations around the world are racing to infuse technology into just about every aspect of the day-to-day operations in some of their cities. Functions like water management, power-supply, sanitation, urban mobility, solid waste management, e-governance, IT connectivity, and public transport systems are being modernized with the help of IoT technology. 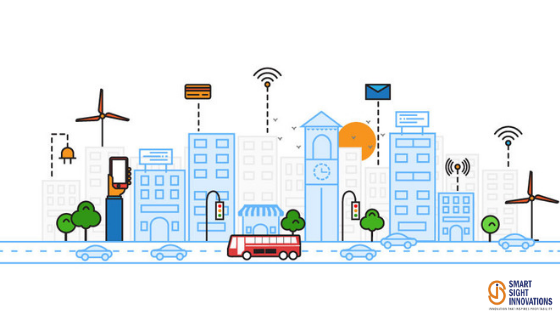 What's IoT? And What Is Its Role in Smart Cities?

Simply put, Internet of Things or IoT is a network that consists of hundreds of devices, sensors that can communicate with one another. The AI and ML capabilities in the IoT help the network in processing the information received from the connected gadgets. Further, this data is sent to the user or is used in deciding the further action, like adjusting the devices, etc.

Cities that work towards improving the lives of its people with the help of digital technologies and big data are smart cities.

Almost every country finds it difficult to manage the growing influx of citizens in various urban city areas. Thus, cities are becoming smart by embracing data-sharing and analytics, artificial intelligence, and of course, thousands of sensors. Municipal corporations are adopting new technologies to save operational costs and maximize efficiencies of existing assets.

A recent study conducted by the US-based ABI Research pointed out that smart city technologies have the potential to save as much as $5 trillion in annual costs during the next four years. However, embracing a holistic approach is the need of the hour to ensure success in the projects that are currently being executed.

5G Networks Can Prove to Be a Boon

Various smart city features, including primary devices like electronic road signs, street lighting, intelligent traffic lights, waste management devices, smart parking systems, can work efficiently if connected to 4G and 5G mobile networks. So, a secured 5G network can surely prove to be a boon for cloud-based IoT powered devices. Countries like China, India, the UK, and the US, along with South Korea, and Japan are conducting 5G network trials. Spectrum auctions are set to be held in 2019. From the custom eCommerce development to the functioning of advanced garbage bins with sensors, 5G networks would revolutionize almost everything.

A Need for a New Approach and Technologies

Solving all the issues in one go and making the entire country smart may not be possible at this point. As pointed out by Teradata's CTO, Stephen Brobst during his recent interaction with journalists, the pain point of every city can be different. Some areas may have transportation infrastructure as their primary concern, while others might be more bothered about the quality of life of the people. The roadmap for technology selection needs to be in line with the pain points of citizens living in the selected areas. Brobst also suggested that municipal corporations around the world should focus on improving efficiency and take a self-funding approach for projects instead of raising taxes.

Some areas may need solutions with more focus on AI and ML than sensors to improve the efficiency of existing devices. AI and ML have also changed the way people shop online these days. Even tech-firms like Smart Sight Innovations that offer eCommerce development solution have implemented AI and machine learning capabilities into shopping portals.

Singapore and Barcelona: a Glimpse at IoT-Powered Cities From the Future

The initiatives visible in Singapore and Spain's Barcelona city in health care, transportation, lighting, and managing public amenities often make it in the headlines. They show a glimpse of how future, tech-savvy cities could operate and deliver.

The Southeast Asia-based island country, Singapore, initiated its Smart Nation initiative and implemented IoT-powered systems. The network of cameras and sensors installed on almost every corner of the city can tell where people are smoking in prohibited zones or loitering from high-rise housing.

Authorities can monitor crowd density, cleanliness of public places, and even track the exact movement of all registered vehicles. This data is fed into an online platform called Virtual Singapore. It gives an idea about how the city is functioning, on a real-time basis.

Barcelona's Lighting Masterplan initiative often attracts attention due to the remarkable reduction reported in streetlights power consumption. Since 2014, most of the city's lampposts have been fitted with LED lights. Most importantly, the IoT-powered system (equipped with sensors) automatically turns the lights dim when streets are empty. The system has helped in lowering energy consumption. Plus, lampposts also serve as Wi-Fi network hotspots and are fitted with sensors to monitor air quality.

Besides the smart irrigation system in most of the city's parks, Barcelona Smart Parking spaces deserve a special mention.

Most of the parking spaces are fitted with specially designed, in-ground parking sensors. The IoT-powered system offers real-time information about free parking spots in various parts of the city. Sensors on the street use light and metal detectors to check if the parking spaces are occupied. The mobile application launched under the initiative helps drivers to reserve parking as well.

Barcelona's waste management system can prove to be a good case study. The sensors and devices fitted on waste bins send notifications to the authorities and waste collection trucks as soon as they are about to be filled. There are different bins for paper, plastic, glass, and waste food items in every locality.

The authorities have also set up a network of drop-off containers connected with underground vacuum pipes that suck up the trash and leave it in the processing unit. The system eliminates the need for trash trucks to collect the garbage.

What is Stopping Cities From Turning Smart?

During the last five years, several developing countries, including India, made their smart city plans public. A report released recently by Philips Lighting and Smart Cities World pointed out that most of the projects around the world have been held back due to lack of budget, infrastructure, and necessary political leadership. The adoption rate is also slower in most developed nations due to issues related to the integration of the old infrastructure with the IoT-powered network.