In the last few years, Prometheus has gained huge popularity as a tool for monitoring distributed systems. It has a simple yet powerful data model and query language, however, it can often pose a bit of a challenge when it comes to high availability as well as for historical metric data storage. Adding more Prometheus replicas can be used to improve availability, but otherwise, Prometheus does not offer continuous availability.

For example, if one of the Prometheus replicas crashes, there will be a gap in the metric data during the time it takes to failover to another Prometheus instance. Similarly, Prometheus’s local storage is limited in scalability and durability given its single-node architecture. You will have to rely on a remote storage system to solve the long-term data retention problem. This is where the CNCF sandbox project Thanos comes in handy.

Thanos is a set of components that can be composed into a highly available metrics system with unlimited storage capacity on GCP, S3, or other supported object stores, and runs seamlessly on top of existing Prometheus deployments. Thanos allows you to query multiple Prometheus instances at once and merges data for the same metric across multiple instances on the fly to produce a continuous stream of monitoring logs. Even though Thanos is an early-stage project, it is already used in production by companies like Adobe and eBay.

Because YugabyteDB is a cloud native, distributed SQL database, it can easily interoperate with Thanos and many other CNCF projects like Longhorn, OpenEBS, Rook, and Falco.

In this blog post, we’ll show you how to get up and running with Thanos so that it can be used to monitor a YugabyteDB cluster, all running on Google Kubernetes Engine (GKE).

At a high level, Thanos has several key components worth understanding how they work.

An illustration of the components is shown below. You can learn more about the Thanos architecture by checking out the documentation. 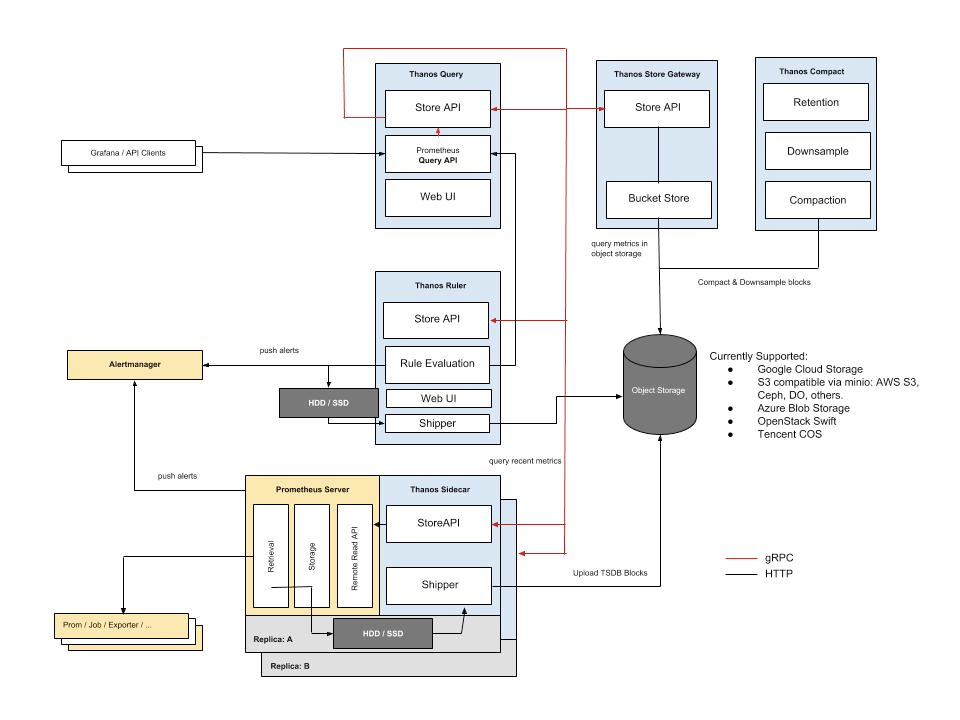 Why Thanos and YugabyteDB

Because YugabyteDB already integrates with Prometheus, Thanos can be used as a  resilient monitoring platform for YugabyteDB clusters that can also store the metric data long term. It ensures the continuous availability of YugabyteDB metric data by aggregating the data from multiple Prometheus instances into a single view.

Here is the environment required for the setup:

Setting Up a Kubernetes Cluster on Google Cloud Platform

Assuming you have a Google Cloud Platform account, the first step is to set up a Kubernetes cluster using GKE.

The usual defaults should be sufficient. For the purposes of this demo, I chose Machine type: n-1-standard-4 (4 vCPU, 15 GB memory). 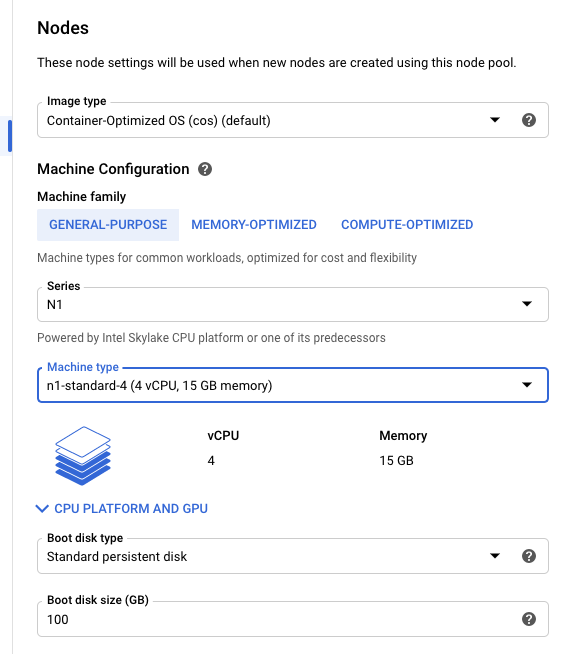 Install YugabyteDB on GKE With Helm

Once your Kubernetes cluster is up and running, log into the shell, and work through the following commands to get a YugabyteDB cluster deployed using Helm 3.

Fetch Updates From the Repository

We are now ready to install YugabyteDB. In the command below, we’ll be specifying values for a resource constrained environment.

To check the status of the YugabyteDB cluster, execute the command below:

From the screenshot above we can see that the external IP is 35.239.35.3 and that the YSQL port is 5433. You can use this information to connect to YugabyteDB with your favorite database admin tool, like DBeaver, pgAdmin, and TablePlus. For more information, check out the third-party tools documentation.

Congrats! At this point, you have a three-node YugabyteDB cluster running on GKE.

Setting Up the Prometheus Operator

For the purposes of this blog, we will be using the Prometheus Operator deployed via Helm 3 to get Prometheus up and running.

By default, Helm charts install multiple components that are not required to run Thanos with Prometheus. Also, since our cluster has limited resources, we need to override the default configuration by creating a new values.yaml file and passing this file when we install the Prometheus Operator using Helm.

Install the Prometheus Operator via Helm 3 as shown below.

You can verify that the Prometheus Operator is installed using the following command:

To avoid the scenario of metrics being unavailable, either permanently or for a short duration of time, we can run a second instance of Prometheus. Each instance of Prometheus will run independent of the other, however each instance will still have the same configuration as set by the Prometheus Operator. You can see this implementation detail in the bolded section below where we specify 2 replicas.

Next, apply the promethus.yaml file to the Kubernetes cluster using the following command:

You can verify that the Prometheus Operator is installed using the following command:

You should see output like that shown below with two Prometheus pods now running:

To access the Prometheus UI we need to first run the following command:

Now, go to Web preview in Google Console and select Change port > 9090. You should now see the Prometheus web UI, similar to the one shown below:

The next step is to configure Prometheus to scrape YugabyteDB metrics. Create a file named servicemonitor.yaml with the following content:

We can now apply the servicemonitor.yaml configuration by running the following command:

Verify that the configuration has been applied by running the following command:

You should see output similar to the one shown below.

Now, return to the Prometheus UI to verify that the YugabyteDB metric endpoints are available to Prometheus by going to Status > Targets.

Add the following Thanos specific configurations to the prometheus.yaml file under the spec section that starts at line 7:

Finally, add the following Thanos deployment configuration to the end of the prometheus.yaml file:

We are now ready to apply the configuration by running the following command:

Verify that the pods are running by running the following command:

Notice that we now have Thanos running.

Connect to the Thanos UI

Connect to Thanos Query by using port forwarding. You can do this by running the following command replacing the thanos-query pod name with your own:

We can now access the Thanos Web UI, using the web preview with port 10902.

Verify that Thanos is able to access both Prometheus replicas by clicking on Stores.

The YugabyteDB metric data is now available to Thanos through both Prometheus instances. A few examples are below:

That’s it! You now have a YugabyteDB cluster running on GKE that is being monitored by two Prometheus instances, which not only made highly available but also appear as one, with Thanos. For more information, check out the documentation on YugabyteDB metrics and integration with Prometheus.