Generic classes are a powerful tool in any programming language, but they can also bring a great deal of confusion. For example, how come List<Double> is not a subclass of List<Number> even though Double is a subtype of Number? In this article, we will explore the various rules that surround subclassing generic types and build a cohesive view of the generic inheritance mechanism provided by Java. Before delving into this important topic, though, we will define the various different techniques for defining generic types and generic class arguments.

The purpose of generics in an object-oriented language is to allow for arbitrary aggregate types to be supplied to a class without having to write a new class for each of the supplied types. For example, if we wanted to write a list class to store objects, without generics we would be forced to either create a new class for each type passed (e.g. IntegerList, DoubleList, etc.) or have the internal structure of the list class store Objects as depicted in the listing below:

Although using Object does solve the problem of storing any Object or type that derives from Object, it still has important flaws. Foremost among these is the loss of type safety at compile time. For example, if we were to call addElement with an argument of Integer, the supplied Integer is no longer treated as its actual type, but rather, as an Object. This means we must cast the Integer when retrieved and code that is outside of our control that uses this MyList class may not have enough information to know what type to cast the retrieved element to.

This problem compounds if we add another element, but this time of type Double. If a consumer of our MyList class is expecting a list of Integer objects, performing a cast to Integer on the retrieved element will cause ClassCastException at runtime. If on the other hand, we expected the MyList class to contain values of type Number (of which Integer and Double are both subclasses), we have not transmitted this information to ensure type safety at compile time. In essence, the fact that our list contains both Integer and Double objects is arbitrary from the perspective of the compiler. Since it does not know our intent, it cannot perform checks to ensure that we are indeed abiding by our stated intentions.

In order to solve this, Java Development Kit (JDK) 5 introduced the concept of generic classes to Java, which allows for a type parameter to be specified within arrow brackets after the class name. For example, we can now rewrite our List class as follows:

Now we can create a MyList of Integer objects:

Notice that if we wanted to create another MyList to store Double objects, we do not have to create another class: We can simply instantiate a MyList<Double>. We can also create a list of Number objects in a similar manner:

In this case, the sum method assumes that all the stored elements are Number objects or objects that derive from Number, thus allowing for a numeric value to be computed. If we did not include this generic type upper bound, a client could instantiate a list of Object or another non-numeric type, and we would be expected to compute the sum (which does not make sense from a domain or problem perspective). Note that the extends portion of the upper bound can be used to specify an interface that the generic parameter must implement or specify multiple interfaces (or one class and multiple interfaces). For more information, see the Bound Type Parameters article by Oracle.

Before moving further, an important distinction must be made between named generic parameters, such as T, and wildcards:

Just as with upper bounded generic parameters, there may be cases where we do not care about the type of the generic argument, except that it is a subclass of a specified type or that it implements a specified interface. For example, suppose we want to process a list of Number objects in a loop. In this case, we would need to specify that we expect the upper bound on our list to be Number, as seen below:

It is tempting to simply set the type of list to ListOfNumber<Number>, but that would restrict our usage to exactly ListOfNumber<Number> objects. For example, we would be unable to return ListOfNumber<Double> from the ListOfNumberFactory.getList() and perform the same operation. We will see the importance of this distinction more clearly later when we discuss the generic class hierarchy.

Note that we are pragmatically restricted from adding any objects to our ListOfNumber class because we do not know the actual generic argument of the list when using an upper bounded wildcard: We only know that its actual implementation type is a subtype of Number. For example, it may be tempting to think that we can insert an Integer object to ListOfNumber<? extends Number>, but the compiler will be thrown an error if we do since it cannot guarantee the type safety of such an insertion. The generic argument could be Double, in which case, we cannot add an Integer object to a list of Double. For more information, see this StackOverflow explanation.

Unlike named generic parameters, wildcards can also specify a lower bound. For example, suppose we wanted to add an Integer to a list. The natural inclination would be to specify that the type of the list would be MyList<Integer>, but this arbitrarily restricts the types of lists we can operate on. Could we not add Integer objects to a list of Number or a list of Object as well? In this case, we can specify the lower bound of the wildcard, allowing any generic argument type that is the same or a superclass of the lower bound type to be used:

In general, generic subclasses can be broken up into two categories: (1) generic parameter subtypes and (2) wildcard generic subtypes. In a similar sense to the division between the definition and usage of generics that we previously saw with generic parameters and generic wildcards, respectively, each of these two categories has its own nuances and important rules of inheritance.

For example, if we have a List<Number>, List<Double> (where Double is a subtype of Number) is not a subtype of List<Number>. In fact, the only relationship between List<Number> and List<Double> is that they both inherit from Object (and as we will see shortly, List<?>). To illustrate this scenario, we can define the following set of classes:

This set of classes leads to the following inheritance hierarchy: 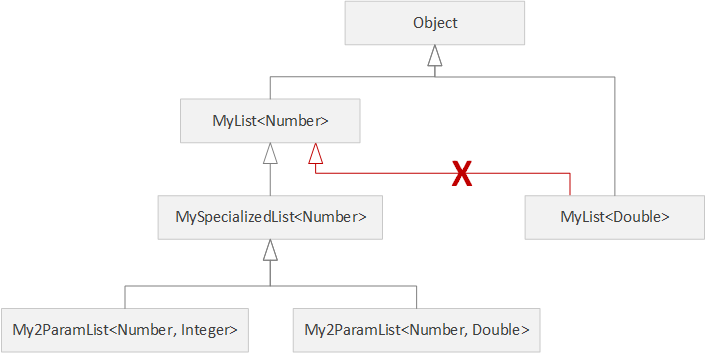 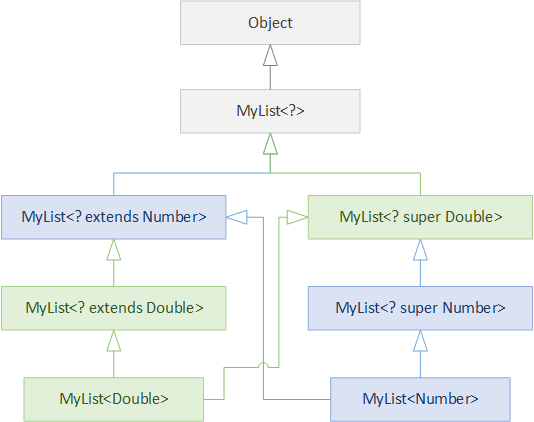 With the top of the hierarchy established, we will move to the bottom and focus on MyList<Double> (green class in the bottom-left). Two classes act as direct parents to this class: (1) MyList<? extends Double> and MyList<? super Double>. The former case simply states that MyList<Double> is a subclass of a MyList that contains any Double objects or objects that are subtypes of Double. Viewed a different way, we are saying that a MyList that contains only Double is a special case of a MyList that contains Double objects or any other subclass of Double. If we were to substitute MyList<Double> where MyList<? extends Double> were expected, we know that our MyList would contain Double or subtypes of Double (in actuality, it would contain onlyDouble, but that still suffices to meet the Double or subtype of Double requirement).

The generic argument specialization and generalization in the first two cases are illustrated in the figure below:

Generics add some very powerful features to an object-oriented language, but they can also introduce deep confusion in the conceptual models of a language for both new and experienced developers. Foremost among these confusions is the inheritance relationships among the various generic cases. In this article, we explored the purpose and thought process behind generics and covered the proper inheritance scheme for both named generic parameters and wildcard generics. For more information, consult the Oracle articles on generics and generic inheritance: