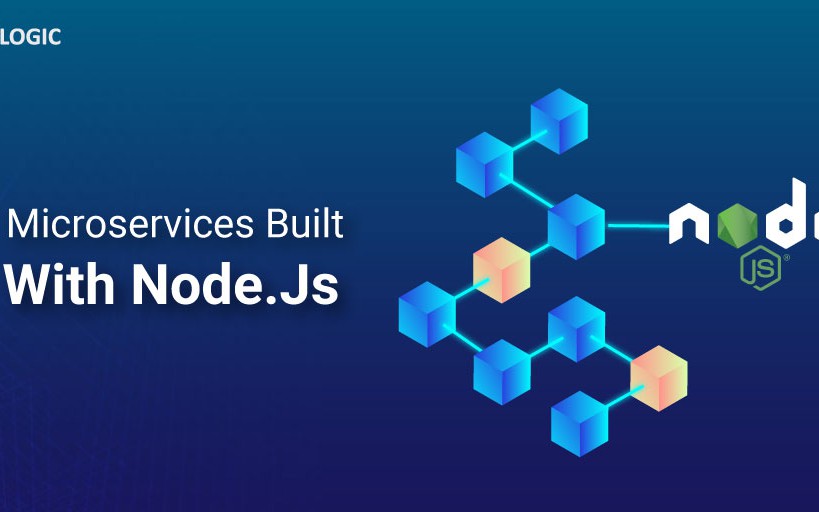 Find out how to build microservices with Node.js.

Building real-world applications in the JavaScript language requires dynamic programming, where the size of the JavaScript application grows uncontrollably. New features and updates get released, and you need to fix bugs to maintain the code.

To execute this, new developers need to be added to the project, which becomes complicated. The structure of modules and packages is unable to downsize and simplify the application. To run the application smoothly, it is essential to convert the large, homogeneous structure into small, independent pieces of programs. Such complexities can be resolved effortlessly when JavaScript applications are built on microservices, more so with the Node.js ecosystem.

You may also like: Microservices With Node.js: Scalable, Superior, and Secure Apps

Compared to its predecessor, the monolithic architecture, microservices are hands down more beneficial. You don’t need to stuff all software components and services in one big container and pack them tightly. With microservices, you can build an app with:

When you build applications on a monolithic architecture, the entire application needs to be deployed with every update. On the other hand, microservices have no dependency on the type of framework, technique or programming language being used to build them. Your ability to release REST-ful APIs for communication and other services is the only requisite for microservice architecture.

When it comes to building JavaScript microservices, a majority of developers prefer the Node.js platform. In a JavaScript engine, Node.js is a cross-platform, open-source runtime environment (RTE) used for building networking and server-side applications. Written in JavaScript, Node.js is executed on Microsoft Windows, OS X, and Linux operating systems within the Node.js runtime.

To build microservices for real-world applications with Node.js, a basic understanding of JavaScript programming is important. The steps involved in developing microservices with Node.js showcase how working applications in our hyperconnected world can perform superbly when constructed with a functional combination of multiple, unique APIs.

To understand the process better, let’s use Node.js to build a microservice for connecting external APIs. As the development progresses, improvements will be made to make the microservice more responsive and cost-effective.

To build this microservice, let’s assume that a business requires a service that identifies two ZIP codes and provides the distance between them. The distance is calculated in miles. You’ll need to use validation techniques for ZIP code identification and distance calculation. The requirement wants the service to configure external API calls. And, it is essential to quickly duplicate calls and make the process more cost-efficient. For this, an internal cache can be implemented.

To begin with, install Node.js on your computer or workstation. Installing the Node.js

8.1.1 version is recommended. To download the latest version of Node.js, visit Nodejs.org.

NPM (Node.js packet manager) is included in the installation suite. There are several stages where you need to use the NPM. For building this microservice, NPM will be used for launching the project, loading the dependencies, and executing the service.

To initialize the project,

Executing the command initiates the walk-through for package.json file creation. By creating the package.json, the project establishes its foundation. The name and version of the service are entered, or you can choose from the defaults and update later.

The microservice will be built on two primary packages — Request and Express.

The Request package enables the microservice to set up a connection with third-party, web-based APIs.

The Express package is a structure for Node applications used for supporting the Node.js foundation of the microservice.

To add these packages to the package.json file,

The npm init command has developed a structure of files and folders for creating the microservice. The primary file is called server.js. API support files are stored in the API folder. Third-party API connection logic is saved in the service folder. Other key folders include node_modules, package-lock.json, and package.json.

The Express and Request packages are saved to this structure as dependencies in the node_modules folder.

Now, the coding for microservice can begin.

The first part of the coding involves building a server that recognizes and accepts the requests. For this, you need to begin with the server.js file, which is the primary file of the project. The code used to create server.js file goes like this:

The next step would be specifying the routes for response transmission. The server created earlier assigns routes that ensure all requests are processed.

Defining the routes is a critical stage in microservice development. The routes are defined by two end-points for dispatching and accepting requests.

In this project, the Express package is added to the sever.js file and is further used to build a new app object. In JavaScript development, an app object is responsible to set or remove attributes from the application scope. Now, the port is specified, and the system properties are configured according to the process object. The role of the process object is to execute the process by performing the input, running the specified process, checking the output status of the process, and ending the process thereafter.

The default port specification is valued at 3000. By specifying PORT as the environment variable, you can choose to define the port number (value) based on the system running this application.

In the next stage, a route object is transmitted to the API folder from the routes.js file. While doing so, the app object (created earlier) is carried forward with the routes object. This allows the app to start wiretapping the port that was defined. As this process gets completed, the app displays a message to the console.

Each route defined to the server needs to assigned to a controller object target. To build the controller object, use the two end-points and an about endpoint that provides the application information. For this project, both the ZIP codes will be used as the two parameters defining the path for distance endpoints. When the target is assigned, the endpoint displays the distance between the two ZIP codes, calculated in miles.

New JavaScript versions enforce the security for coding practices by employing the use of strict directive. To state the functions inside a module, module.exports is used. This way, the stated functions are can be used by keeping them available in another file which includes the routes module. The routes module specifies the routes for the Express package and is imported from the server.js folder.

At this stage of the process, two routes are added to the microservice. The GET requests are transmitted with the first route on the /about endpoint. The function of the controller responds to these requests. The second route processes the GET requests on /distance endpoint, and the controller use the get_distance function to handle them. The two parameters, “zipcode1” and “zipcode2”, are specified respectively.

Adding controller logic to the microservice equips it with some interesting functions. A controller object interprets user intentions and actions and communicates the new or modified data to process objects.

For this microservice, a controller object with two properties needs to be created in the controller file. The two properties are nothing but the functions of handling the requests received from the routes module.

Now that the controllers are added, an external service is ready to be executed. This is the final part of the microservice development with Node.js. Here, the third-party API call is handled by the API file. To get the API key, you can get is free from ZIPCODEAPI.com. To make the external call, set an expired test key as the default key.

The code runs the Request package to make the external HTTP request, which needs to be updated for testing error conditions. The code enables the find function to accept the parameters for objects namely—request, response, and next. URL of the service is accepted by the request object. The callback function handles the response object.

Eventually, the distance object is exported, and the controller can represent the concrete instances and functions of the external API calls as needed. To wrap up the execution of this microservice, the code needs to be reviewed for typos in the command.

Despite these drawbacks, Node.js is still observed as a suitable environment to build real-world applications and JavaScript microservices. The basic distributed system of microservice architecture with Node.js shows you how to separate applications build communications between services. The RESTful APIs process the data and maintain the code towards the deployment of each microservice. In the years to come, Node.js will be actively used in building mature, open-source tools and developing microservices for enterprise-level software.

Published at DZone with permission of Sagar Tambe. See the original article here.