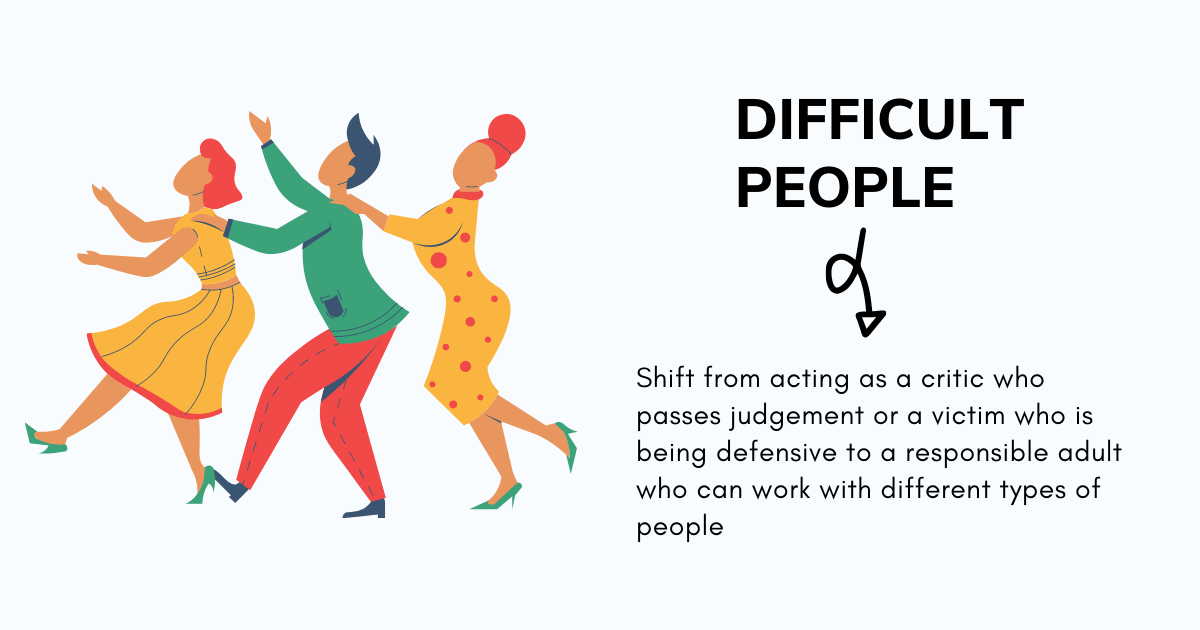 It's then natural to want to work with people who are just like us, our clones.

So, every once in a while when we come across people who do not value our inputs, crush our ideas, ignore what we have to say, act as a know-it-all, seem to find pleasure in criticism, satisfaction in creating chaos and look for the negative side of things, it upsets us.

These so-called difficult people push our buttons by acting in undesirable ways. Their behavior gives us permission to pass judgement and offload responsibility by blaming them. After all, they are at fault.

Epictetus, a Greek stoic philosopher once said, "Men are disturbed not by things, but by the view which they take of them."

While difficult people are a reality of life and everything we feel about them may be true, is it really in our best interest to navigate our lives by blaming them, holding them responsible for not reaching our goals and pretending that we didn't succeed because of some mean co-workers.

Is there a better way of working with difficult people? Can we shift from acting as a critic who passes judgement or a victim who is being defensive to a responsible adult who can work with different types of people?

Before jumping to strategies, let us learn how we think, act and behave around difficult people. Without understanding our own mindset, any strategy we try to put to practice will be superficial. It will not address our underlying emotions, the most critical aspect to deal with while working with people we find difficult and challenging.

From The 7 Habits of Highly Effective People by Stephen R. Covey -

To try to change outward attitudes and behaviors does very little good in the long run if we fail to examine the basic paradigms from which those attitudes and behaviors flow. As clearly and objectively as we think we see things, we begin to realize that others see them differently from their own apparently equally clear and objective point of view. "Where we stand depends on where we sit"

How Do We Deal with Difficult People? 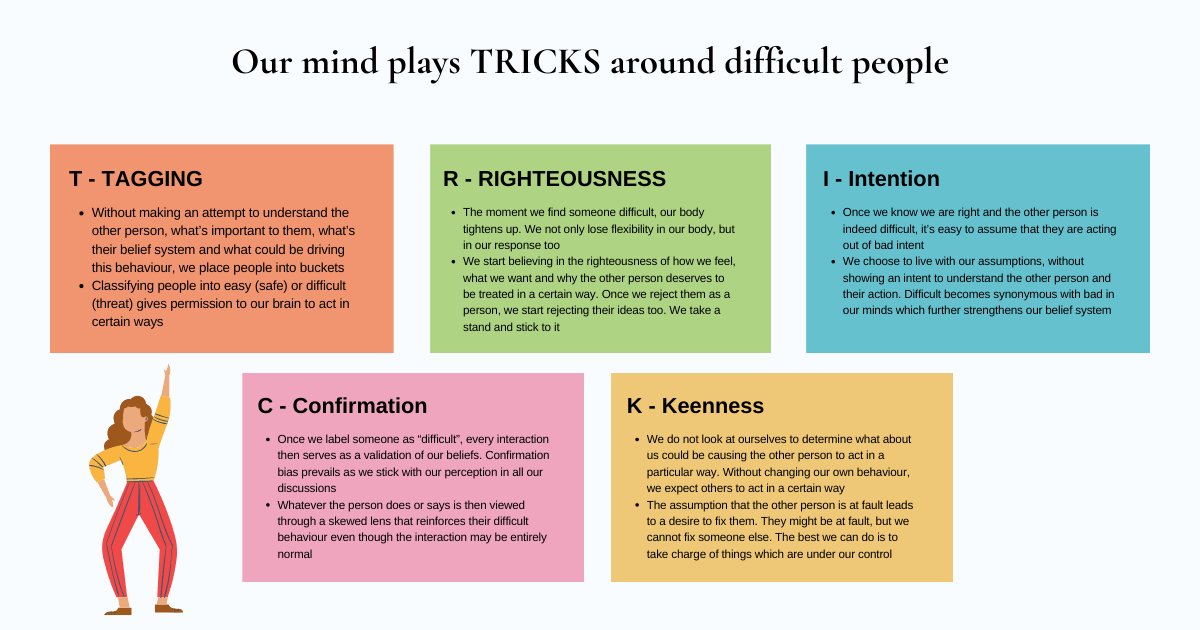 Some people instantly click and connect to us and it is difficult to comprehend or rationalise why we trust them. Then there are others we dislike the moment we shake their hands with our inner voice whispering in our ears "I am not going to like this person".

Why we find someone difficult is then a very personal affair. That doesn't mean there aren't people who are largely unpopular, but they are very rare.

Once our mind takes us down the emotional path, we take a one-sided view of the problem. When dealing with difficult people, remember this TRICK (T - Tagging, R - Righteousness, I - Intention, C - Confirmation, K- Keenness) framework that drives us to behave in certain ways:

Isn't it easy to notice flaws in others while ignoring our own shortcomings? We are quick to label others - he's needy, manipulative, fake, cheat, pretentious, condescending, cynic, liar, opinionated, arrogant, argumentative.

From Jonathan Haidt, The Happiness Hypothesis -

We judge others by their behavior, but we think we have special information about ourselves- we know what we are "really like" inside, so we can easily find ways to explain away our selfish acts and cling to the illusion that we are better than others

Without making an attempt to understand the other person, what's important to them, what's their belief system and what could be driving this behavior, we place people into buckets.

Tagging people happens in the part of our brain that runs on auto-pilot without our conscious awareness. It's what helps our brain to apply shortcuts while dealing with others.

Classifying people into easy (safe) or difficult (threat) gives permission to our brain to act in certain ways.

The moment we find someone difficult, our body tightens up. We not only lose flexibility in our body, but in our response too. We start believing in the righteousness of how we feel, what we want and why the other person deserves to be treated in a certain way. Once we reject them as a person, we start rejecting their ideas too. We take a stand and stick to it.

From Dale Carnegie, How to Win Friends and Influence People -

The fixed view enables us to rationalise why the person is acting this way.

I - Intention Driven by Assumptions

Once we know we are right and the other person is indeed difficult, it's easy to assume that they are acting out of bad intent.

"Never attribute to bad intentions that which is adequately explained by ignorance, incompetence, negligence, misunderstanding, laziness or other probable causes"

Without applying Hanlon's razor as a mental model to understand their behavior and look for alternate perspectives, we assume bad intention as the source of the problem.

We choose to live with our assumptions, without showing an intent to understand the other person and their action.

Difficult becomes synonymous with bad in our minds which further strengthens our belief system.

C - Confirmation of Our Beliefs

Once we label someone as "difficult", every interaction then serves as a validation of our beliefs. Confirmation bias prevails as we stick with our perception in all our discussions.

It leads us to reject the evidence that contradicts our beliefs and look for information that strengthens our point of view.

Whatever the person does or says is then viewed through a skewed lens that reinforces their difficult behavior even though the interaction may be entirely normal.

We stick with our first impression instead of making an attempt to view every situation differently.

K - Keenness to Fix Others

We do not look at ourselves to determine what about us could be causing the other person to act in a particular way. Without changing our own behavior, we expect others to act in a certain way.

The assumption that the other person is at fault leads to a desire to fix them.

They might be at fault, but we cannot fix someone else. The best we can do is to take charge of things which are under our control.

Take this advice from Stephen R. Covey in The 7 Habits of Highly Effective People -

Many factors in interdependent situations are not in your Circle of Concern-problems, disagreements, circumstances, other people's behavior. And if you focus your energies out there, you deplete them with little positive results. But you can always seek first to understand. That's something that's within your control. And as you do that, as you focus on your Circle of Influence, you really, deeply understand other people. You have accurate information to work with, you get to the heart of matters quickly, you build Emotional Bank Accounts, and you give people the psychological air they need so you can work together effectively

Remember that our mind plays these tricks to help us make sense of the world and the people in it. Labelling someone difficult and sticking to it is letting your brain run on auto-pilot, while taking control requires conscious effort and deliberate thinking.

What Happens When We Interact with Difficult People? 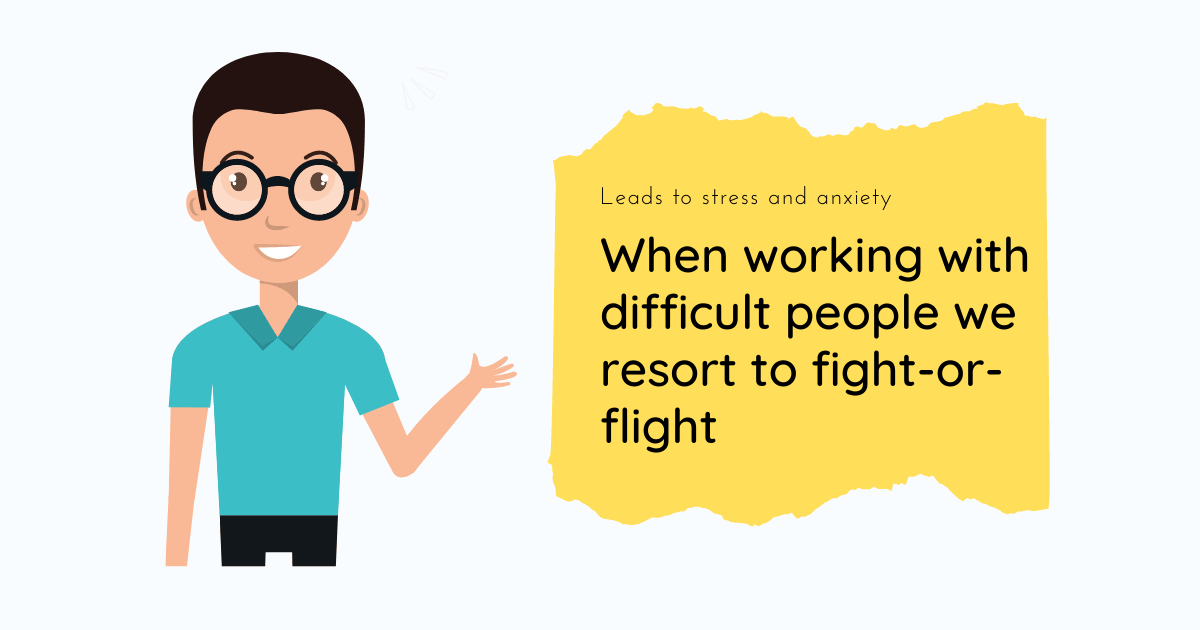 When dealing with difficult people, it's perceived as a threat by the amygdala which triggers fight-or-flight response as a mechanism to respond to danger.

We either try to fight the behavior by reacting instinctively without a thoughtful response or flee from the situation without solving the problem. Each such interaction can release stress hormones that can lead to pounding heart, quickened breathing, tense muscles and anxiety.

It can also drain us of our energy making us feel exhausted and can lead to overthinking which causes us to get stuck and drift away from important work in turn hitting our productivity.

We may not realise that we have supreme power over our own thinking and action, which contributes to how others around us behave. As Dr. Mike Bechtle advocates in People Can't Drive You Crazy If You Don't Give Them the Keys - "It means that we work on our side of the relationship, no matter what happens on the other side. We don't change them; we change ourselves"

It may seem "right" to want others to change, but it's extremely difficult. So, control what you can and stop thinking about what you can't by following these 4 practices to deal with difficult people:

1. Separate the Person from the Behavior

Labeling a person as difficult or bad doesn't help. When you find someone difficult, you may think that you do not like the person, but it's actually their behavior that you dislike.

Separating the person from their behavior will allow you to identify your own limits and determine what aspect of a person's behavior troubles you.

Following this as a practice every time you encounter a difficult person can help you to draw patterns - is it the perfectionist that bothers you or someone who's too aggressive and loud, what about the extremely logical kinds who ignore emotional cues or people who stick to norms and fear disruption or maybe it's the cultural misfits.

Once you understand this, you can be kind to the person while still devising strategies to deal with their behavior.

It also enables a healthy dialogue by helping you shift in the language you use. There's a huge difference in saying

"I find you obnoxious" vs "The idea that you suggested does not consider..."

First statement is about the person which can instantly make them defensive, while the second one is about their idea which invites the other person to have a healthy debate.

When you are having a tough time trying to understand why the other person is behaving in a manner that displeases you, take a moment to step back. Instead of passing judgement, explore answers.

Widen your perspective by asking these questions:

From The 7 Habits of Highly Effective People by Stephen R. Covey -

Self-awareness enables us to stand apart and examine even the way we "see" ourselves-our self-paradigm, the most fundamental paradigm of effectiveness. It affects not only our attitudes and behaviors, but also how we see other people. It becomes our map of the basic nature of mankind

Turning the difficult moment into a learning experience can help you make changes in the way you respond, ask questions and act around difficult people. Some of these small changes can be big enablers for reinforcing positive behavior.

It may even present an opportunity to the difficult person to shift their perspective by noticing how others around them behave and act.

When you are upset, the natural tendency is to react without thinking straight. While not intentional, your reaction may give more power to the difficult person by acknowledging that they bother you. It causes fixation on a different problem than the one you intended to solve together.

A well thought out action, on the other hand, may diffuse the situation by shifting the focus from their difficult behavior to the desire to find a solution together.

When dealing with difficult co-workers, show a collaborative mindset by

Despite all your efforts to keep the drama in check, things may eventually not work out. Some people are indeed very difficult to manage.

Instead of being disappointed and reverting back to your default mode, involve the right people for guidance and seeking ideas.

Some other strategies that may also work and are worth trying:

Humans are complex, irrational beings and we are not magicians to turn everyone into our clones.

But, we can add a little magic to our life by controlling our own behavior around difficult people.

How do you manage difficult people at work and in life?