We are excited to announce the availability of row-level geo-partitioning in YugabyteDB, a feature heavily requested by our user community and enterprise customers alike. This feature allows fine-grained control over pinning data in a user table (at a per-row level) to geographic locations, thereby allowing the data residency to be managed at the database level.

Making the nodes of a multi-region database cluster aware of the location characteristics of the data they store allows conforming to regulatory compliance requirements such as GDPR by keeping the appropriate subset of data local to different regions, and is arguably the most intuitive way to eliminate the high latency that would otherwise get incurred when performing operations on faraway, remote regions.

In keeping with our 100% open source ethos, this feature is available in YugabyteDB under the Apache 2.0 license, so you can try it out right from your laptop! This blog post will dive into the details of this feature such as the high-level design, use-case benefits, as well as the how to use it.

In order to understand why geo-partitioning is useful, it is necessary to understand some of these deployment topologies, which are summarized in the table below.

As seen from the table above, geo-partitioning can satisfy use cases that need low latencies without sacrificing transactional consistency semantics and transparently perform schema changes across the regions. Geo-partitioning makes it easy for developers to move data closer to users for lower latency, higher performance, and meeting data residency requirements to comply with regulations such as GDPR.

Geo-partitioning of data enables fine-grained, row-level control over the placement of table data across different geographical locations. This is accomplished in two simple steps – first, partitioning a table into user-defined table partitions, and subsequently pinning these partitions to the desired geographic locations by configuring metadata for each partition.

The first step of creating user-defined table partitions is done by designating a column of the table as the partition column that will be used to geo-partition the data. The value of this column for a given row is used to determine the table partition that the row belongs to. The figure below shows this. 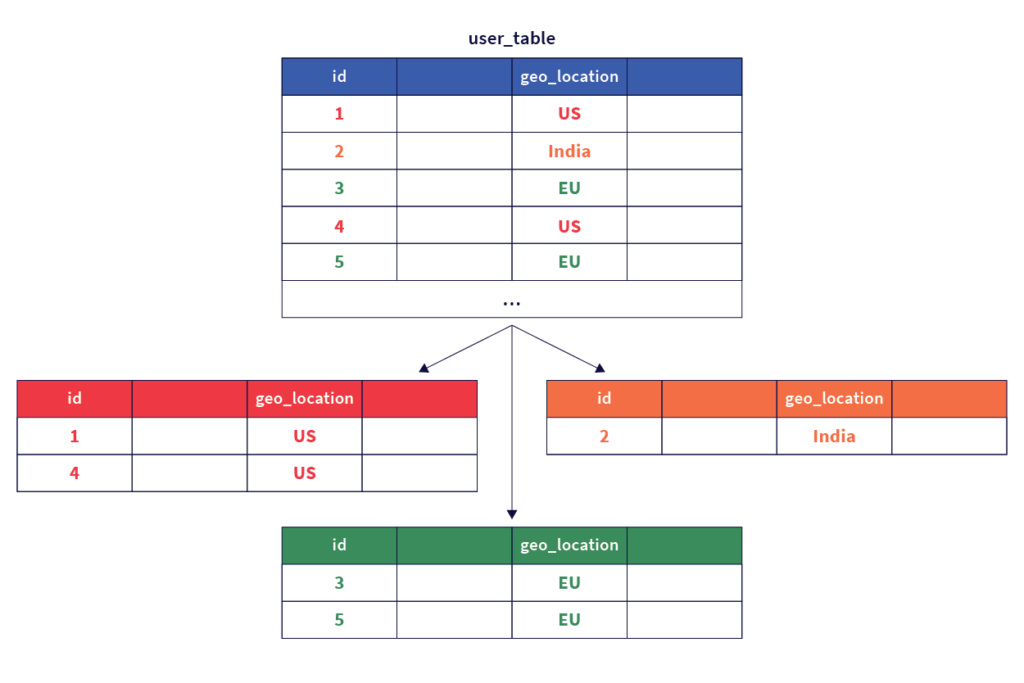 The second step involves configuring the partitions created in step one to pin data to the respective geographic locations by setting the appropriate metadata. Note that the data in each partition can be configured to get replicated across multiple zones in a cloud provider region, or across multiple nearby regions / datacenters. 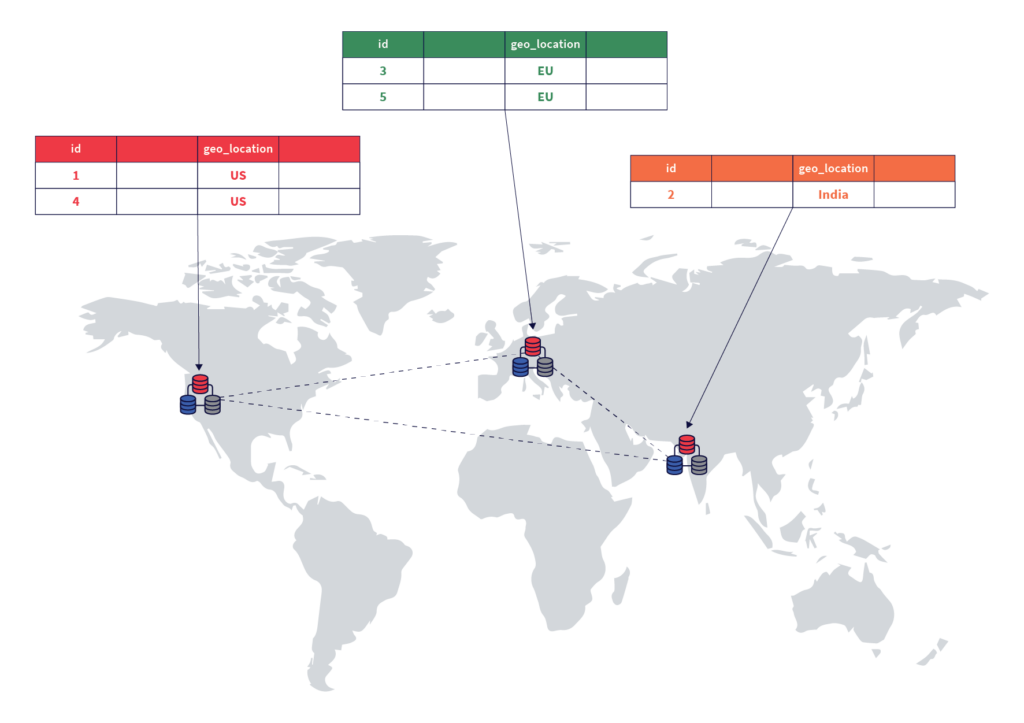 In this deployment, users can access their data with low latencies because the data resides on servers that are geographically close by, and the queries do not need to access data in far away geographic locations. This is shown in the diagram below. 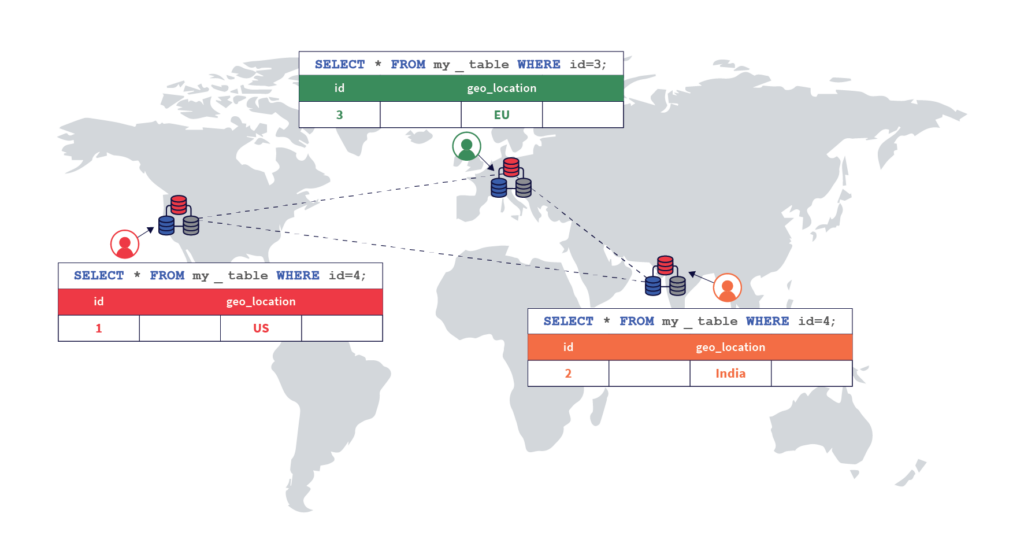 Let us look at this feature in the context of a use case. Say that a large but imaginary bank, Yuga Bank, wants to offer an online banking service to users in many countries by processing their deposits, withdrawals, and transfers. The following attributes would be required in order to build such a service.

Pitfalls of the Traditional “One Database Per Region” Approach

It is possible to deploy and manage independent relational databases in the different geographic regions, each storing the data for the appropriate set of users to achieve both data locality and compliance with regulatory requirements. The disadvantages of such an approach are:

Using Geo-Partitioning for the Example Scenario

In the geo-partitioning approach, we simply deploy one YugabyteDB cluster across the different regions and create a geo-partitioned table for storing the user transactions as shown below.

First, we create the parent table that contains a geo_partition column which is used to create list-based partitions for each geographic region we want to partition data into.

Note that these statements above will create the partitions, but will not pin them to the desired geographical locations. This is done in the next step. The table and partitions created so far can be viewed using the \d command.

Now that we have a table with the desired three partitions, the final step is to pin the data of these partitions to the desired geographical locations. In the example below, we are going to use regions and zones in the AWS cloud.

First, we pin the data of the EU partition transactions_eu to live across three zones of the Europe (Frankfurt) region eu-central-1 as shown below.

Second, we pin the data of the India partition transactions_india to live across three zones in India – Asia Pacific (Mumbai) region ap-south-1 as shown below.

Finally, pin the data of the default partition transactions_default to live across three zones in the US West (Oregon) region us-west-2. This is shown below.

Now, the setup should automatically be able to pin rows to the appropriate regions based on the value set in the geo_partition column. Let us test this by inserting a few rows of data and verifying they are written to the correct partitions.

First, we insert a row into the table with the geo_partition column value set to EU below.

All of the rows above should be inserted into the transactions_eu partition, and not in any of the others. We can verify this as shown below. Note that we have turned on the expanded auto mode output formatting for better readability by running the statement shown below.

The row must be present in the transactions table, as seen below.

Additionally, the row must be present only in the transactions_eu partition, which can be easily verified by running the select statement directly against that partition. The other partitions should contain no rows.

Now, let us insert data into the other partitions.

These can be verified as shown below.

In order to make things interesting, let us say user 100, whose first transaction was performed in the EU region travels to India and the US, and performs two other transactions. This can be simulated by using the following statements.

Now, each of the transactions would be pinned to the appropriate geographic locations. This can be verified as follows.

All the transactions made by the user can efficiently be retrieved using the following SQL statement.

Assume that after a while, our fictitious Yuga Bank gets a lot of customers across the globe, and wants to offer the service to residents of Brazil, which also has data residency laws. Thanks to row-level geo-partitioning, this can be accomplished easily. We can simply add a new partition and pin it to the AWS South America (São Paulo) region sa-east-1 as shown below.

And with that, the new region is ready to store transactions of the residents of Brazil.

The YugabyteDB 2.5 release adds row-level geo-partitioning capabilities, a very critical feature that enables some key use-cases, along with follower reads to the already extensive set of multi-region features in YugabyteDB. These new features, combined with the ability to perform synchronous replication across 3 or more regions and asynchronous replication across 2 or more regions (called xCluster replication), makes YugabyteDB the distributed SQL database with the most comprehensive set of multi-region deployment options. These deployment options across multiple data centers, regions and/or clouds give users even more control to bring data close to their customers for performance, costs, or compliance reasons. All of the features mentioned are 100% open source under the Apache v2 license.