The open-source community often discusses whether to use JMeter or Gatling for load testing. Both are strong tools, and they become even stronger through Taurus. This post covers the differences between Gatling and JMeter and shows you how to run a Gatling test easily through Taurus. This blog post is based on the webinar “Load Testing at Scale Using Gatling and Taurus,” which you can view for free here.

Gatling is an open-source, cross-platform, load testing Java application that uses Scala scripting language. Gatling is a command line tool, i.e., it has no GUI or Web UI, which implies a certain level of technical knowledge for its users (unless you use it through Taurus, which we will discuss further on). 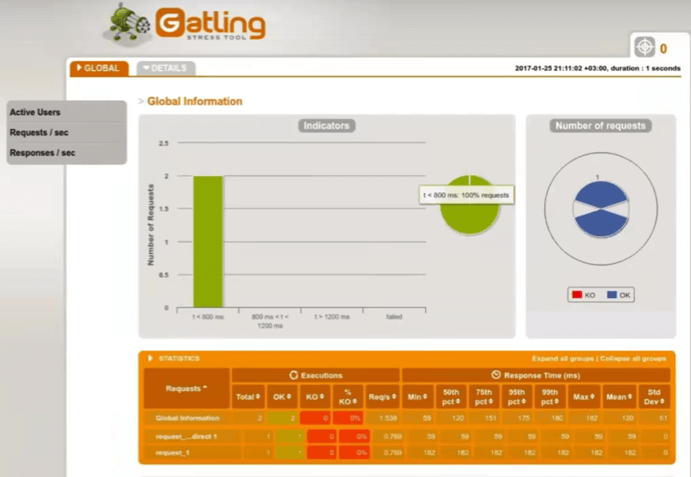 Gatling enables its users to enjoy the full power of working with a programming language, without the limits of GUI DSL. It also has easy-to-use custom code pieces and extra libraries, flexible load-injection profiles, and an asynchronous concurrency model, which saves resource usage as one thread can serve many VUs and connections.

While Gatling and JMeter have different features, we don’t recommend one over the other. Rather, they are both strong and have similar abilities (when JMeter is used with its plugins). Therefore, it’s up to you to choose which one you prefer and like to work with.

While Gatling is a powerful tool, it has a few disadvantages:

The Solution: Taurus for Gatling Users

Taurus is an open-source automation load testing tool that fills in the existing gaps in JMeter, Selenium, and Gatling. Gatling users can run Taurus and gain the advantages of both.

How to Use Gatling With Taurus

First, install Taurus (which is awesome so it installs Gatling for you).

This test examines the Blaze demo website. By using the Gatling load testing tool, it tests 10 concurrent virtual users, with a ramp-up time of 30 seconds, the load is held then for two minutes. The test specifies GET requests with asserts it to include word “sometext,” and then sends a POST request to blazedemo/reserve.php with Some Body Data in the body, defines a two-second think time before sending the requests, and asserts that the HTTP code isn’t 200.

To run the test type:

Taurus will show you KPI results in real-time, as fast as they appear on Gatling. KPIs include latency times, response codes, percentiles, etc.

Taurus doesn’t require scripting, but it does generate a Scala file internally, which looks like this: 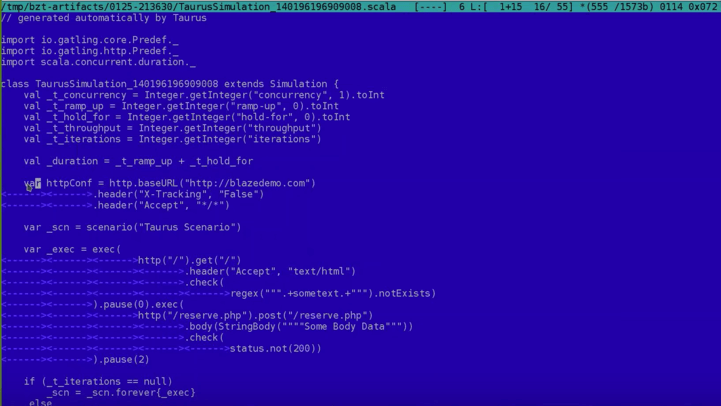 As you can see, Taurus scripting language is easy, and it is much easier than Scala. It also enables you to go back, interrupt the test and edit the file, if you need to.

You can also view the reports of your Taurus test on BlazeMeter without having to sign up for BlazeMeter. Just add -report to your command line, and CA BlazeMeter will open up with statistics, KPI correlations, timeline reports, etc. These reports can be shared between team members.

Congratulations! You can now easily run Gatling through Taurus and view report results on BlazeMeter.