In this series, Artem Nazarenko, Computer Vision Engineer at Everypixel, shows you how you can implement the architecture of a neural network. The first part will be about the working principles of GAN and methods of collecting datasets for training.

GAN development is not as difficult as it seems at first glance. In the scientific world, there are many articles and publications on generative adversarial networks. I chose ARShadowGAN as a reference article. It is a publication about a GAN that generates realistic shadows for a new object inserted into the image. Since I will deviate from the original architecture, I will call my solution ARShadowGAN-like. 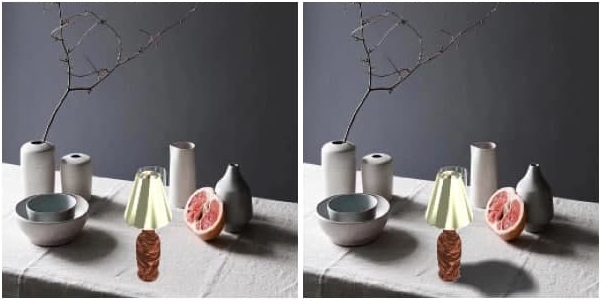 An example of the ARShadowGAN-like neural network

Here is what you will need:

Description of the Generative Adversarial Network 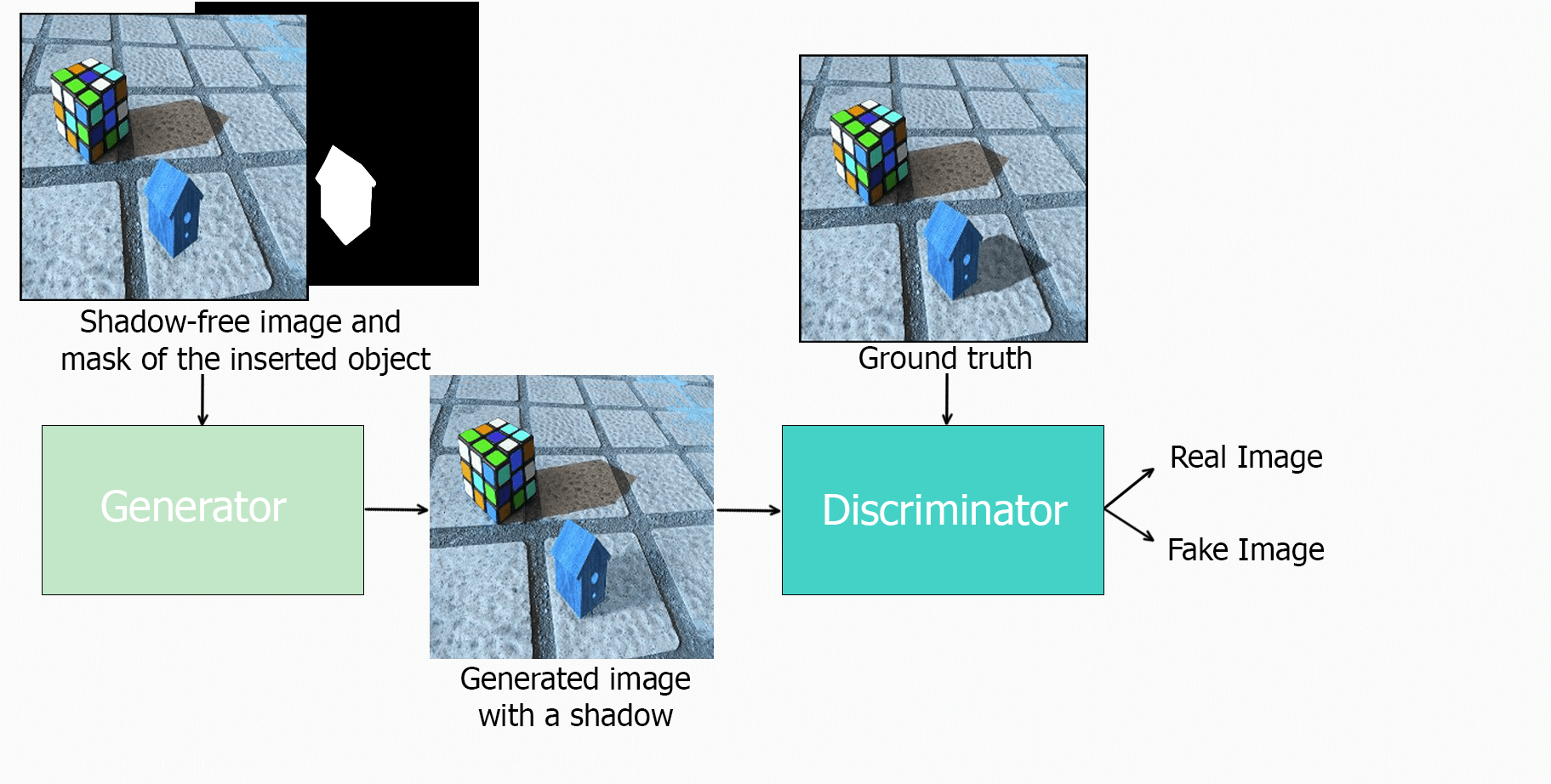 The main task is to train the generator to create a high-quality shadow. The discriminator is required only for better training, and it will not participate in further stages (testing, inference, production, etc.). 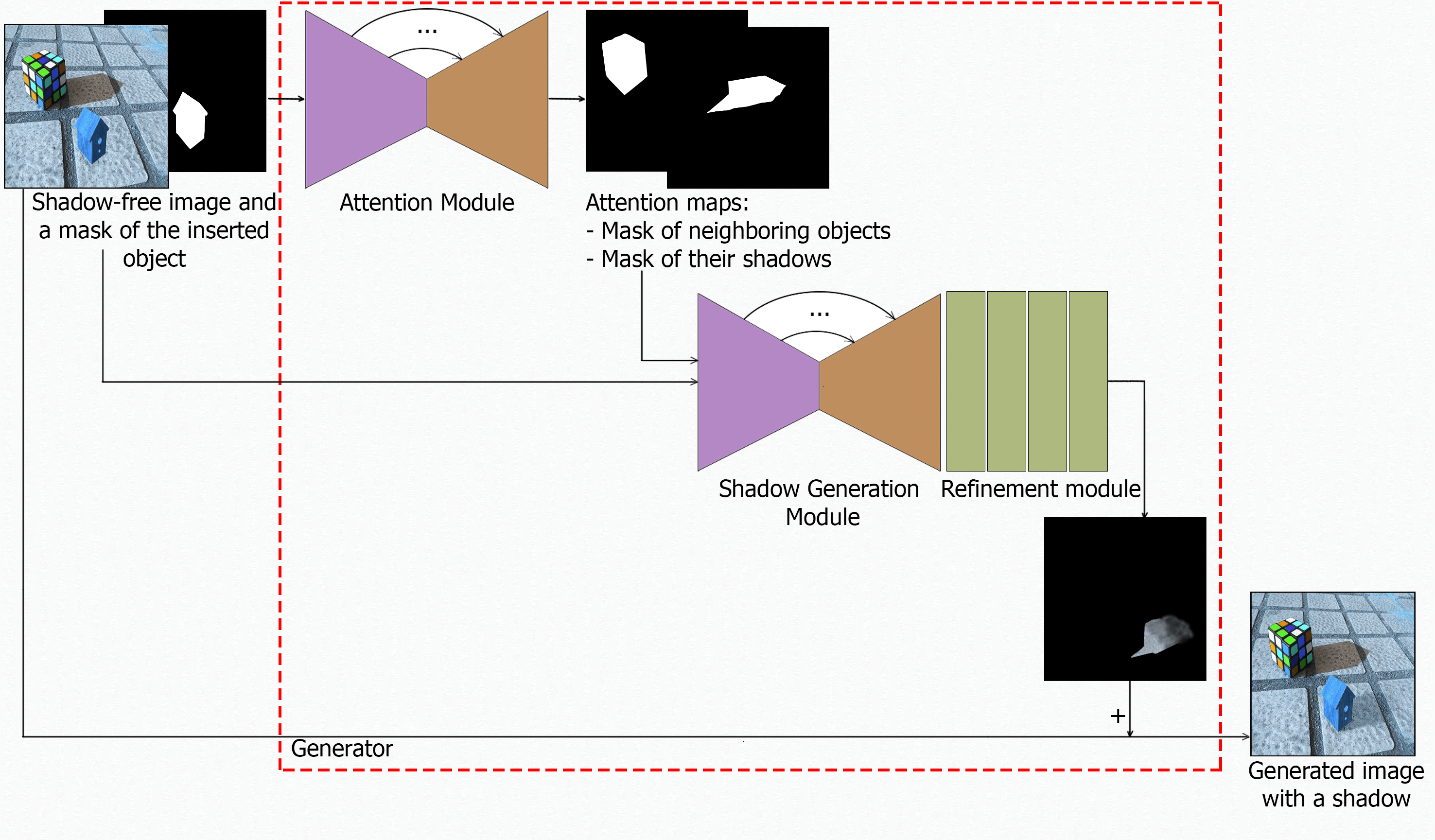 One of the tricks for improving the quality of the outcome is using the attention mechanism. Attention maps are, in other words, segmentation masks consisting of zeros (black) and ones (white, area of interest).

Attention block generates so-called attention maps — maps of those areas of the image that the network needs to focus on. In this case the mask of neighboring objects (occluders) and the mask of their shadows will act as such maps. Therefore, we seem to instruct the network on how to generate a shadow. It navigates using shadows from the neighboring objects as a hint. The approach is similar to how a person would act in real life when making a shadow manually, in Photoshop.

Shadow generation is the most important block in the entire network architecture. Its purpose is to create a 3-channel shadow mask. Similar to the attention block, it has a U-Net architecture with an additional shadow refinement block at the output. At the input, the block receives all currently known information including the original shadow-free image (three channels), the mask of the inserted object (one channel) and the output of the attention block is the mask of neighboring objects (one channel) and the mask of their shadows (one channel). Thus, a 6-channel tensor comes to the input of the module. The output is a 3-channel tensor – a colored shadow mask for the inserted object.

The shadow generation output is concatenated (added) pixel by pixel with the original image resulting in an image with a shadow. Concatenation also resembles a layer-by-layer shadow overlay in Photoshop — the shadow seems to be inserted over the original image.

Discriminator. We took the SRGAN discriminator as a discriminator. It’s small but powerful architecture, as well as ease of implementation. Thus, the complete ARShadowGAN-like scheme will look something like this (yes, it’s small, but individual pieces in close-up have been shown above ☺):

As for paired data, everything is quite understandable: a supervised learning approach is used, that is, there is a ground truth with which the generator output can be compared. To train the network, pairs of images are chosen: the original image — the modified original image. The neural network learns to generate a modified version of the original image.

Coming back to our task of generating shadows, the ARShadowGAN authors use paired data to train their network. The pair is a shadow-free image and the corresponding image with a shadow.

How to collect such a dataset? There are many ways. I will explain some of them.

So, we have pairs of images: noshadow and shadow. Where do masks come from?

An example of a Shadow-AR dataset

In Part 2, we prepare for GAN training, look at loss functions and metrics, see the dataset, and more!

Published at DZone with permission of Artyom Nazarenko. See the original article here.