The Virtual Router Redundancy Protocol (VRRP) provides a way for multiple hosts to communicate so that one of them at a time can hold a virtual IP. Because VRRP is useful for high availability and operates at the intersection of Layer 2 and Layer 3 of the OSI model, it's an interesting topic for a better understanding of networking.

In the first article, I introduced VRRP and ARP, which is essential to its operation. In the second, I took a digression to describe the virtual lab environment. This time, I want to show the workings of VRRP through a common implementation, Keepalived.

In our virtual lab, we have two servers (cleverly named server1 and server2) that both run Keepalived. These two servers work together so that exactly one of them provides a virtual IP. This virtual IP is registered in /etc/hosts on all of the machines under the name server, so that any of the hosts can access something running on the server and the traffic will go to whichever host currently has the virtual IP.

We're going to be simulating network failures. For VirtualBox, my favorite way of doing this is going into the network settings for a VM and unchecking the "Cable Connected" box. This simulates disconnecting the wire. I prefer it because it simulates a hardware failure, unlike setting the network link to down or shutting down the machine.

One more note: when we talk about a "virtual IP," this is unrelated to "virtual lab" or "virtual machine." It works perfectly well to have a "virtual IP" on a physical machine. In fact, a virtual IP is an IP address on some network interface, just like any other IP address; the only thing virtual about it is that there is no permanent host that it is assigned to.

There are a number of interesting notes here:

This is the configuration from server1, but server2 is identical except for the priority, which is lower (100 by convention).

When Keepalived starts, it begins sending announcements. Here is an example: 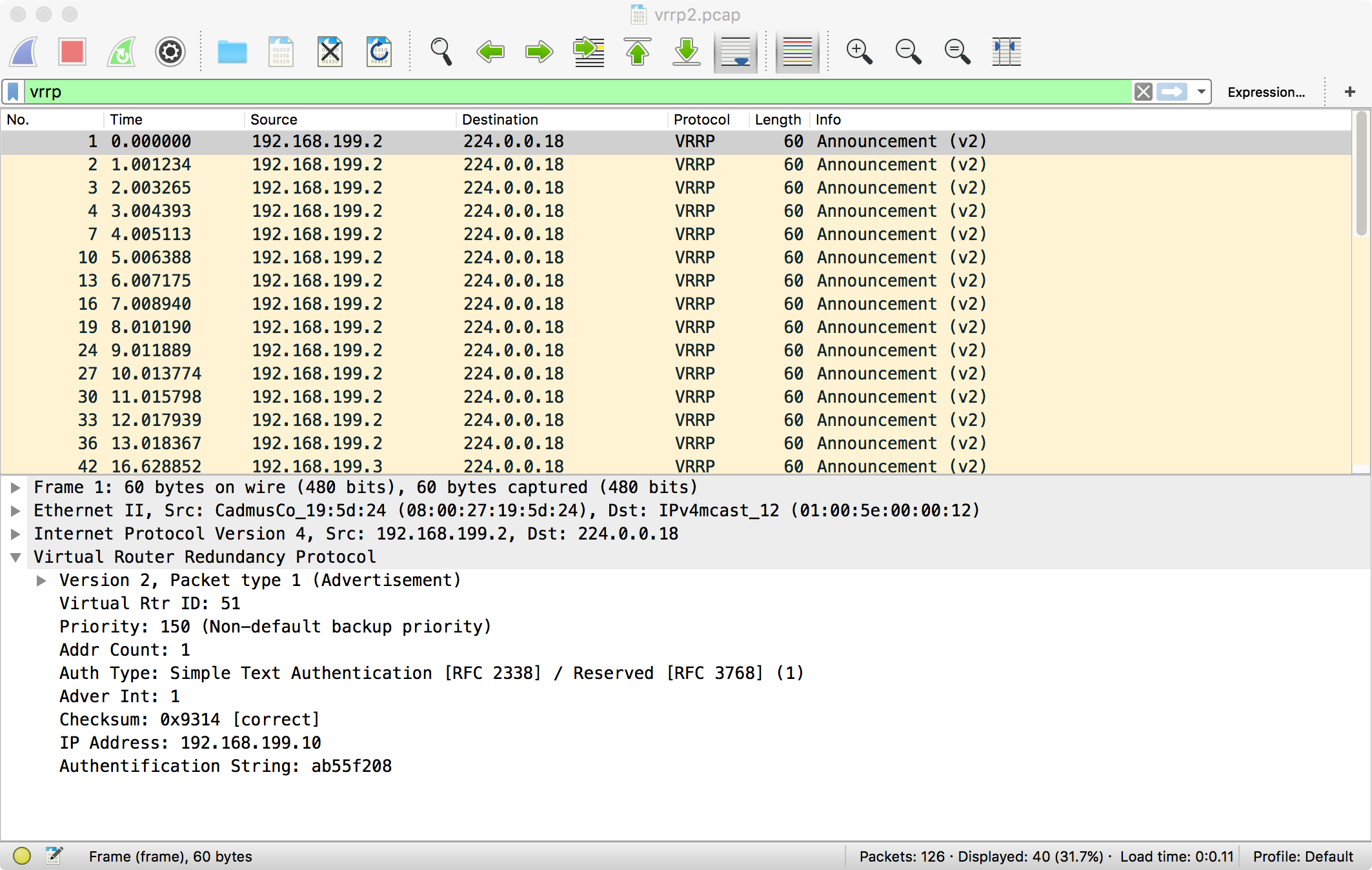 You can see that this announcement comes from 192.168.199.2, which is server1. You can also see that it informs the whole network of its advertisement interval, so other hosts can figure out when the host has failed.

Because we didn't configure Keepalived for unicast, it sends the announcement to the default broadcast destination of 224.0.0.18. This is why the virtual_router_id setting is so important — because there might be unrelated hosts on the same subnet that are also doing VRRP. Finally, you can see the password (the first eight characters anyway).

Note that whether we use VRRP in multicast or unicast mode, we are not using UDP/IP or TCP/IP. VRRP is its own protocol on top of IP that is independent of either of those. The only thing that makes it multicast is the destination. Also note that the Ethernet address is the IPv4 multicast address of 01:00:5e:00:00:12. This is important because a Layer 2 switch needs to know to send this Ethernet packet to all of the ports on the switch.

Because the announcement is a periodic, there isn't much logic required for failover. Once the current master has missed a few announcements, the other hosts start announcing, and the highest priority wins. The resulting packet capture looks pretty similar to above; the only difference is that a new host is announcing: 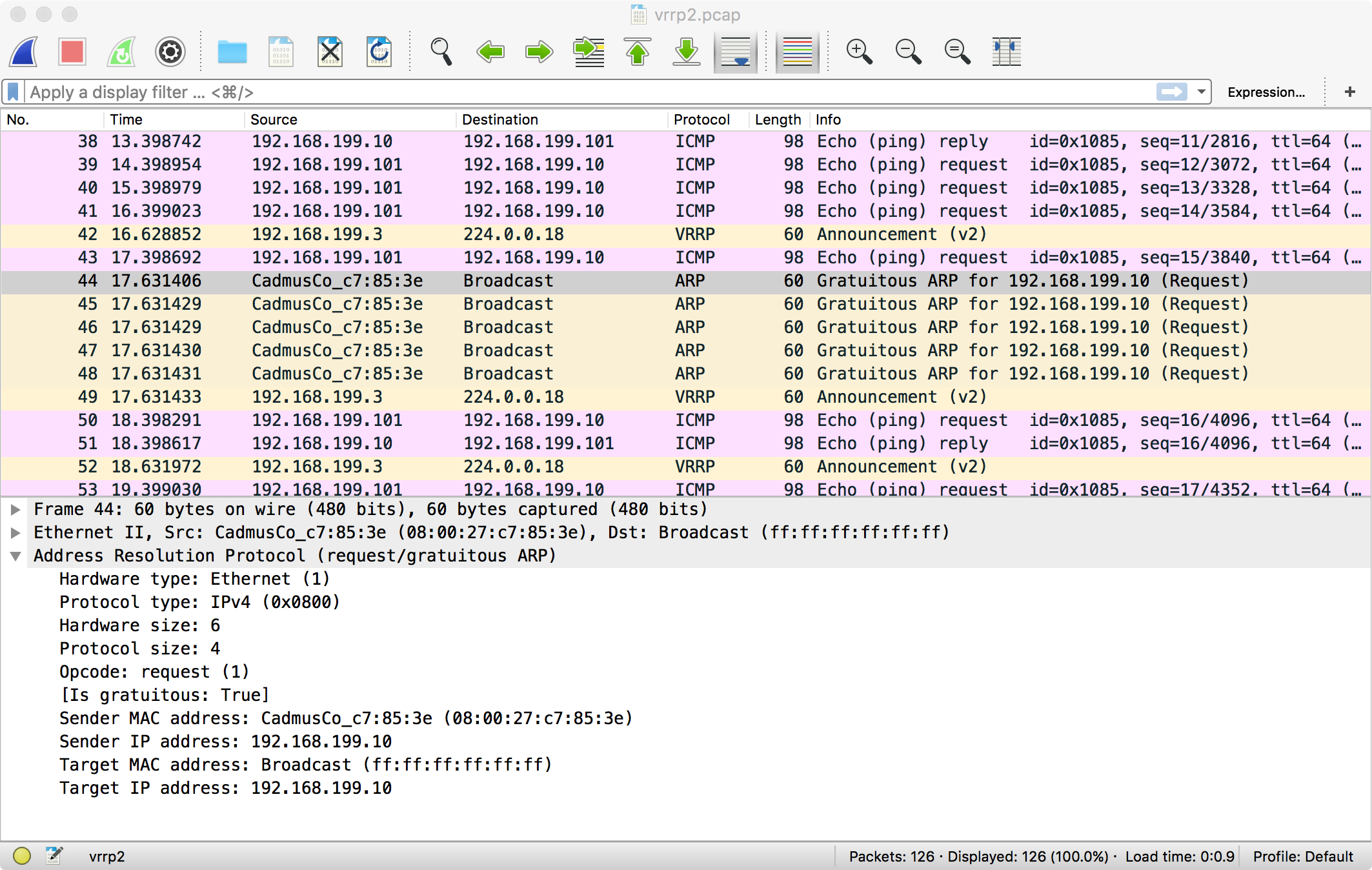 The ARP is sent a few times to make sure everybody catches it. 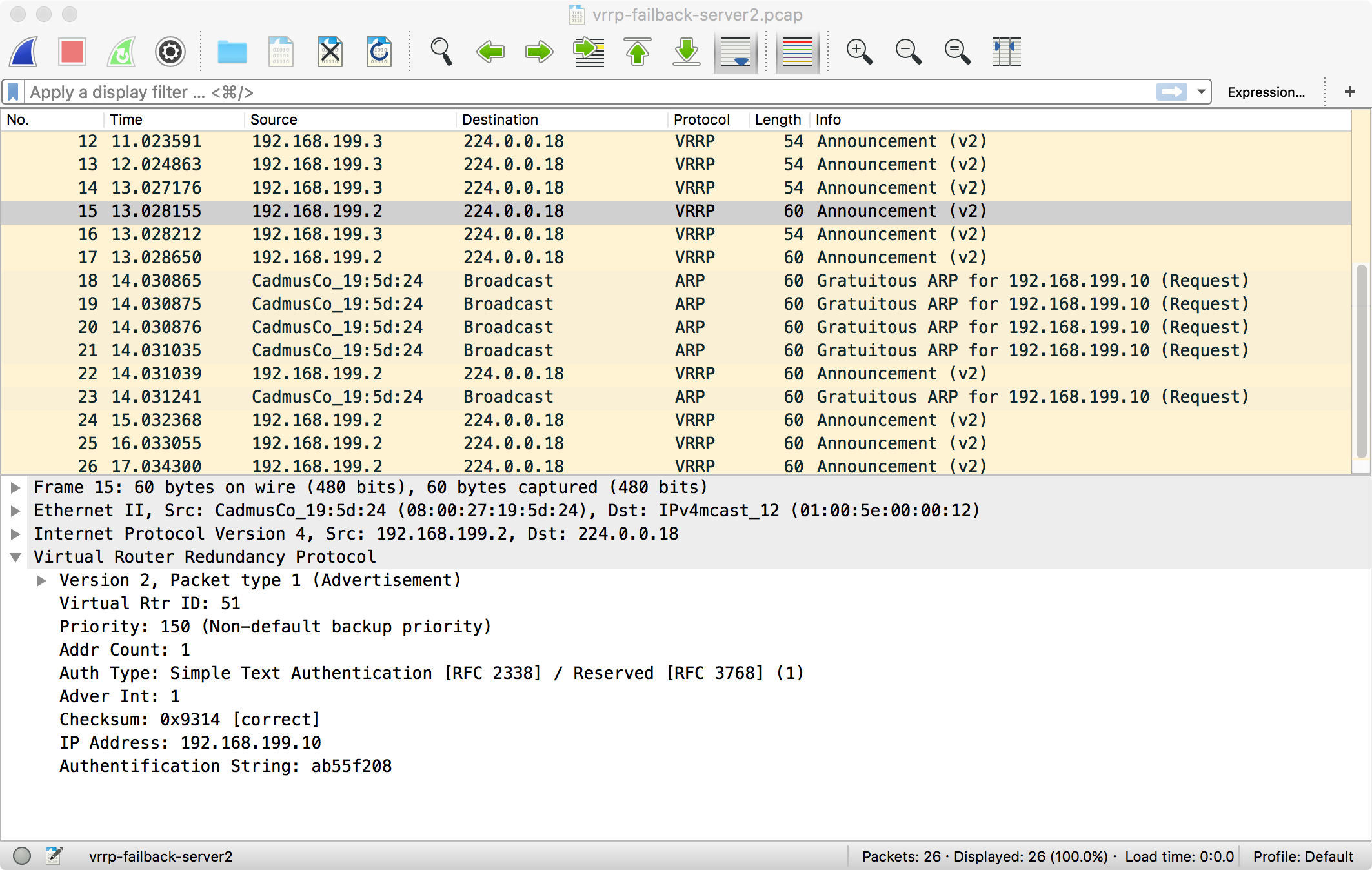 There is one subtle difference in the above. You can see that the backup waits for two announcements from the master before it gives the virtual IP back and stops sending announcements. The master also waits an extra second before taking over. This prevents the two hosts from getting into an argument about who owns the virtual IP.

The view that the client sees is a destination that is interrupted briefly, then is available again: 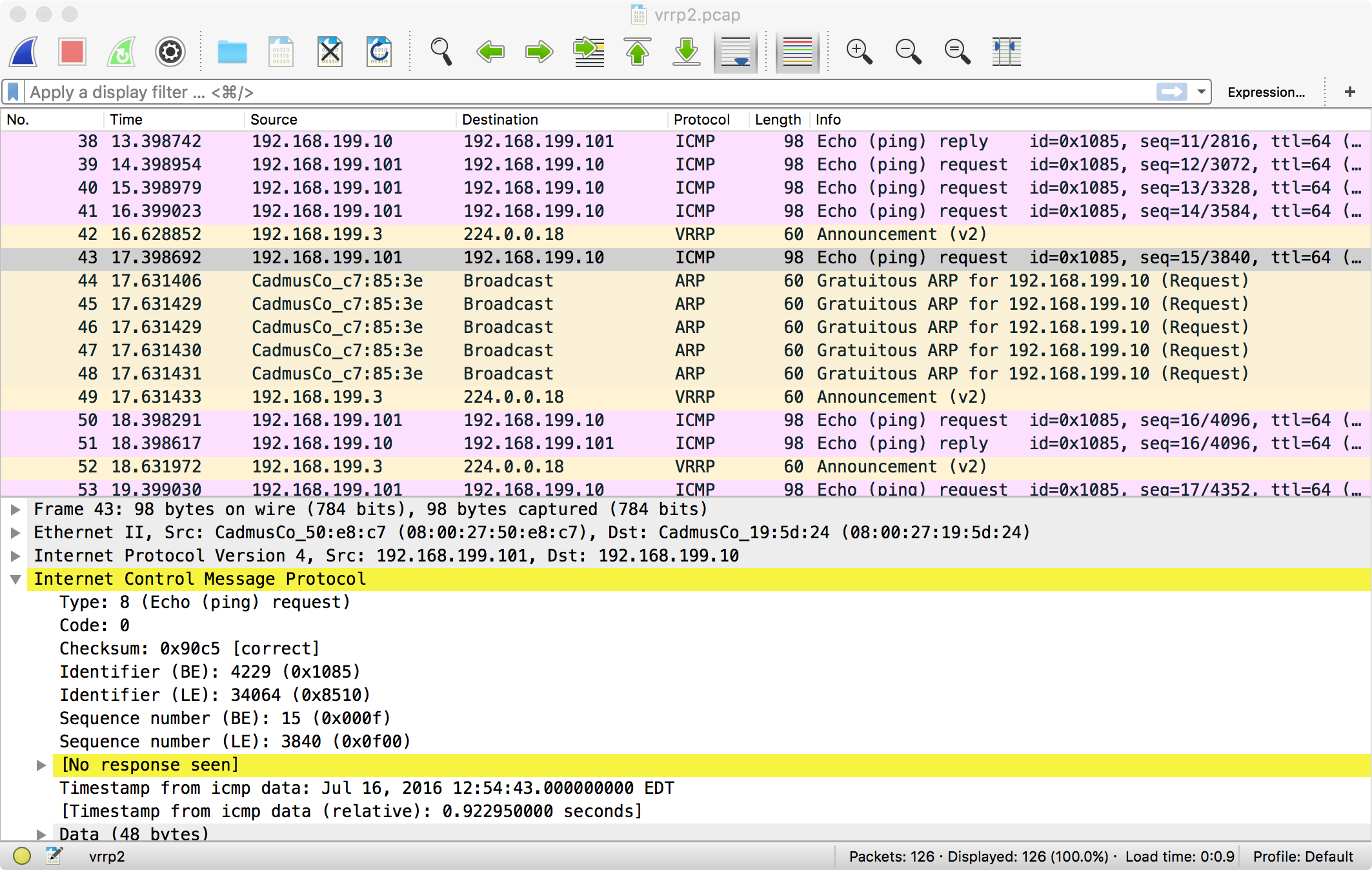 As you can see, for a few seconds after the simulated network failure, pings go unanswered. It's only after the backup kicks in and sends its gratuitous ARP that we start sending pings to the right Ethernet address and they are answered.

Of course, the new host is not going to have any state information that was on the previous host unless we had another way to keep it up to date. So for anything more complicated than a simple ICMP ping, we are probably going to have to reestablish connections in order to survive the failover. I'll talk about that in a future article where I discuss the kinds of network and server architectures that go along with VRRP.