Before we witness drift detection in action it is important to understand what drift is and what we mean by drift detection. Drift detection enables all users to detect if the actual configuration of stack resources differs, or have drifted, from the expected configuration. With the help of this feature, the user can detect drift on the entire stack, or on selected resources from within a stack. If the user has enabled drift detection on the whole stack, then it will be considered as drifted if one or more resources have drifted and CloudFormation will generate detailed information on each resource in the stack that has drifted. If the drift detection is enabled on a selected resource, then the resource is considered as drifted if its current property values differ from the expected values.

There are several examples of how a stack or resource can drift away from its expected configuration. Users can knowingly or unknowingly edit resources directly through the service that created the resource when the stack was deployed. For example, users can use the Amazon EC2 console to update a server instance that was created as part of a CloudFormation stack. After a while, such changes are impossible to track and this issue becomes a huge concern when there are multiple users are working on the same stack or its resources. All such changes which are made outside of CloudFormation can complicate a stack update or deletion operations. In order to solve this issue, users can use drift detection to identify stack resources to which configuration changes have been made outside of CloudFormation. When the drift detection has identified a drift on a stack or selected resources, you can then make appropriate changes to the stack resources so that the stack is in sync with their original definitions in the stack template. Resolving drifts helps to ensure configuration consistency and successful stack operations. 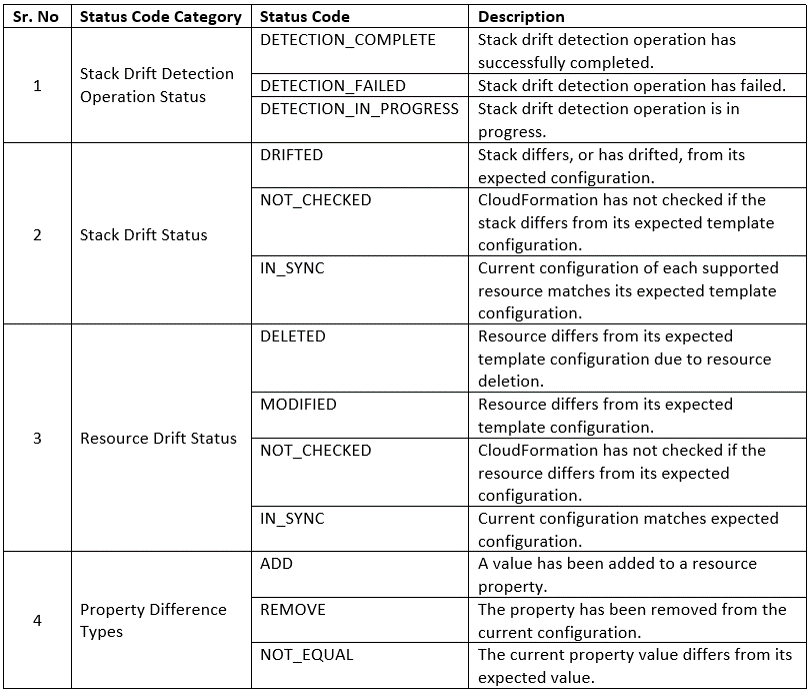 Here are the steps involved in drift detection tutorial:

1. Login to your AWS account and head over to the AWS CloudFormation console.

2. For the sake of this tutorial, we will launch a new stack which will launch a simple EC2 instance. Click on the "Create Stack" button.

4. Click "Next" and enter the stack name and specify parameter values.

7. Expand the Advanced section and check "Enabled against Termination Protection." 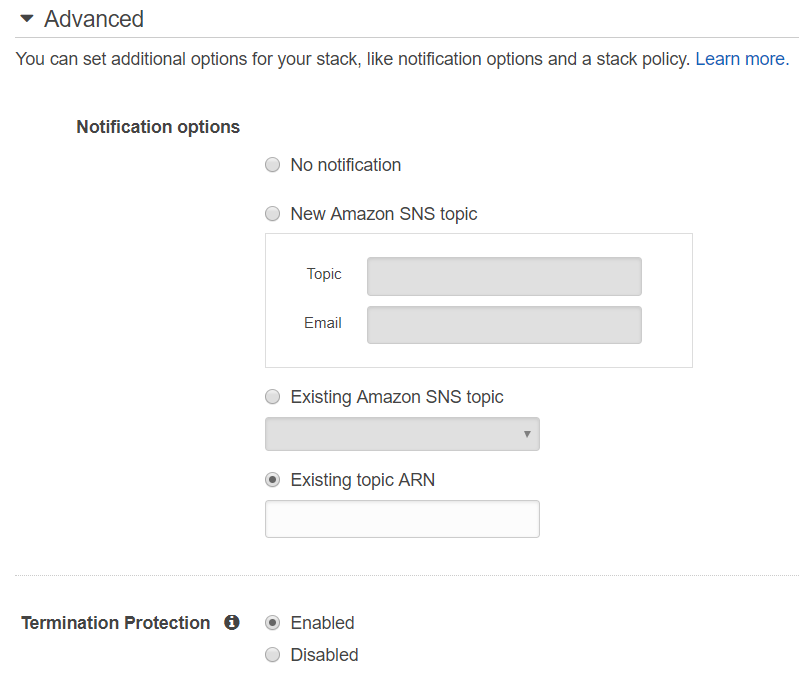 10. When the stack has been created successfully you will see the stack status as CREATE_COMPLETE.

11. Now we will simulate a scenario where a stack configuration has been changed outside of the CloudFormation stack. To accomplish this, we will head over to the EC2 console and delete the SSH inbound rule.

12. Delete the rule SSH rule by clicking on "Edit" and then clicking on the cross symbol at the end of the rule.

13. Now we will head back to the CloudFormation console, select our stack and click on "Detect Drift." 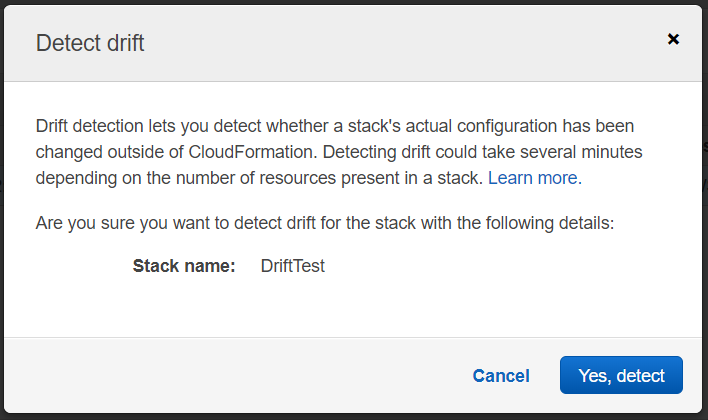 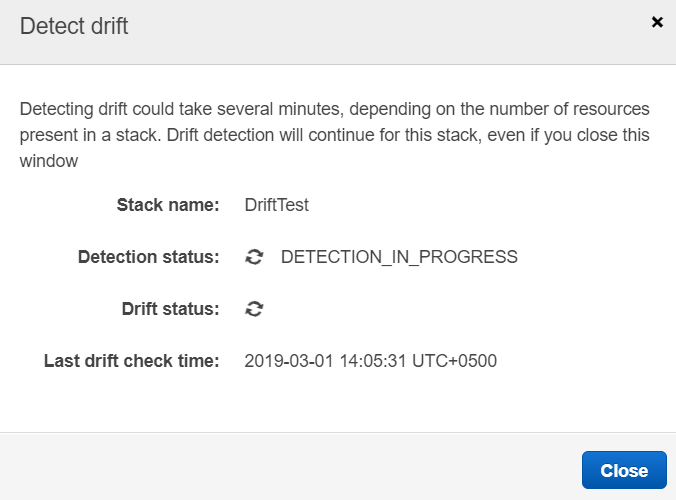 15. Once the drift detection process has been completed observe the Drift Status. 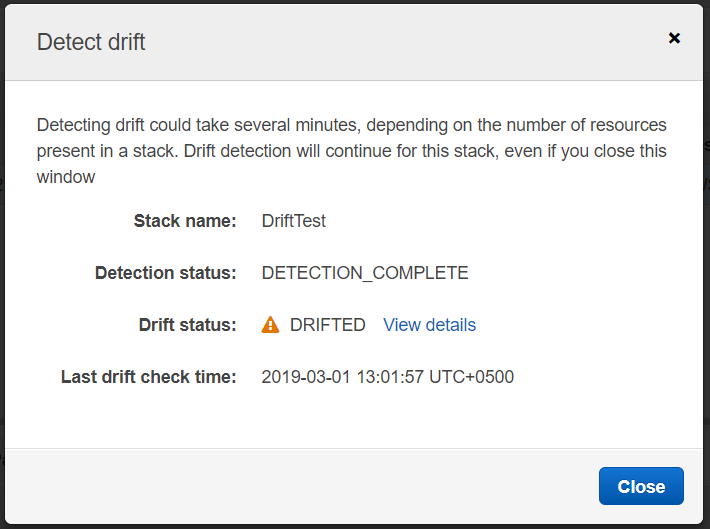 16. We can see that the stack has been DRIFTED. Now let’s try to find out what exact configuration has changed from the CloudFormation console. Click on View Details next to DRIFTED.

17. From this screen, we find out that our EC2 instance is IN_SYNC and nothing has changed regarding that. However, the instance security group shows the resource status of MODIFIED. In order to find out what exact configuration has changed, we will expand the InstanceSecurityGroup.

19. Re-run the drift test again by clicking on Detect drift and click on "Yes, Detect" on the following screen. 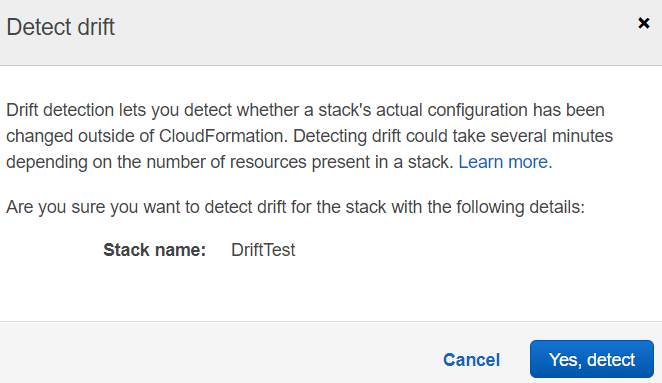 20. After the drift detection process is complete we will see that stack and resource drift statuses are IN_SYNC. 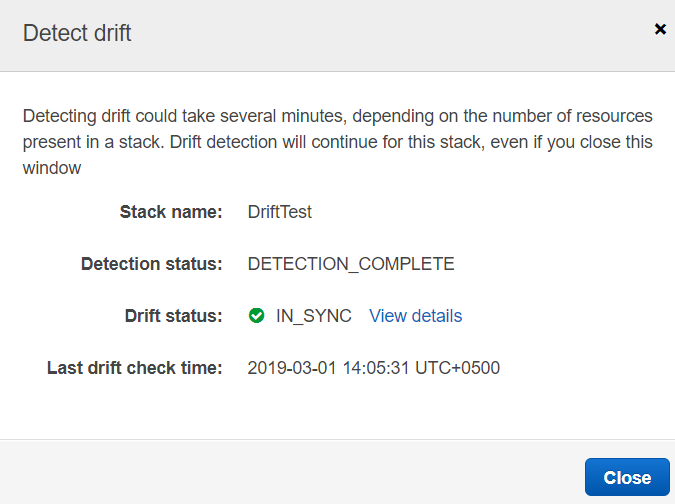 Published at DZone with permission of Moiz Arif. See the original article here.