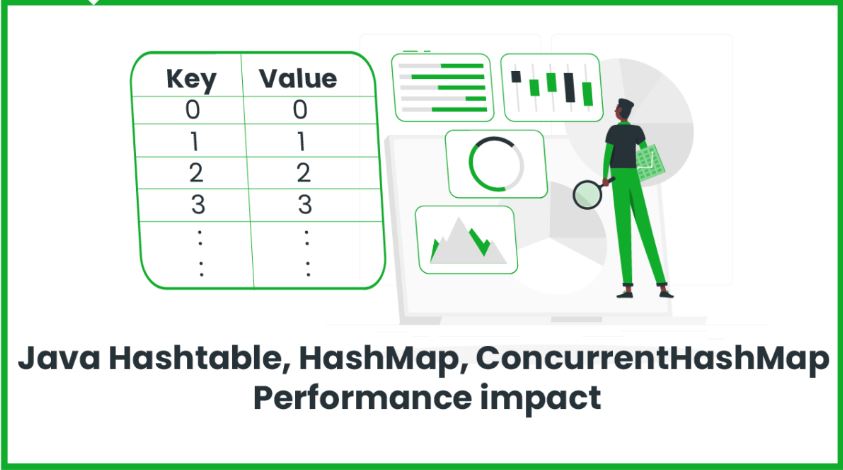 To study the performance characteristics, I have put together this sample program:

This program triggers multiple threads to do a concurrent read and write to the java.util.HashMap. 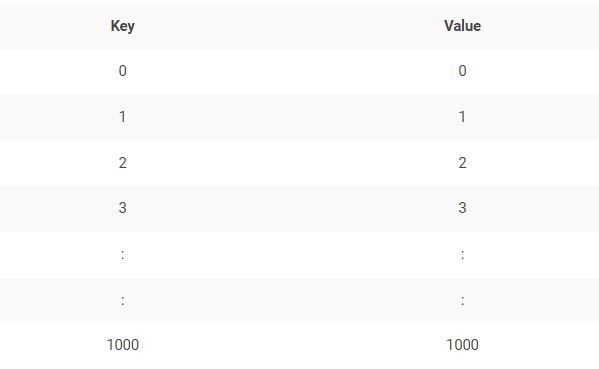 Data in the HashMap

We executed the above program several times. The average execution time of the program was 3.16 seconds.

In order to study the Hashtable performance, we replaced line #7 with java.util.Hashtable and modified the Reader and Writer threads to read and write from the Hashtable. We then executed the program several times. The average execution time of the program was 56.27 seconds.

In order to study the Hashtable performance, we basically replaced line #7 with java.util.concurrent.ConcurrentHashMap and modified the Reader and Writer threads to read and write from the ConcurrentHashMap. We then executed the program several times. The average execution time of the program was 4.26 seconds.

The below table summarizes the execution time of each data structure:

Notice HashMap has the best performance; however, it’s not thread-safe. It has a scary problem that can cause the threads to go on an infinite loop, which would ultimately cause the application’s CPU to spike up.

If you notice ConcurrentHashMap is slightly slower performing than HashMap; however, it’s a 100% thread-safe implementation.

On the other hand, Hashtable is also a thread-safe implementation, but it’s 18 times slower than HashMap for this test scenario.

Why Is Hashtable So Slow?

Hashtable is so slow because both the get() and put() methods on this object are synchronized (if you are interested, you can see the Hashtable source code here). When a method is synchronized, at any given point in time, only one thread will be allowed to invoke it.

In our sample program, there are 20 threads.  10 threads are invoking the get() method, and another 10 threads are invoking the put() method. In these 20 threads, when one thread is executing, the remaining 19 threads will be in a BLOCKED state. Only after the initial thread exits the get() or put() method, the remaining threads would be able to progress forward. Thus, there is going to be a significant degradation in the performance.

To confirm this behavior, we executed the above program, captured the thread dump, and analyzed it with fastThread (a thread dump analysis tool) that generated this analysis report. Below is the excerpt from the report that shows the transitive dependency graph of BLOCKED threads. 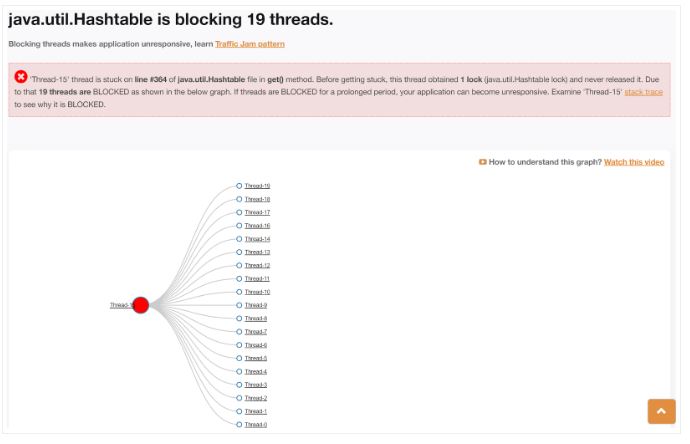 The report was showing that 19 threads were in a BLOCKED state, while one of the threads (i.e., Thread-15) is executing the get() method in the Hashtable. Thus only after Thread-15 exits the get() method, other threads would be able to progress forward and execute the get() and put() method. This will cause a considerable slowdown in the application performance.

If you have a need to use a map data structure, you may consider using ConcurrentHashMap, which provides similar performance characteristics to HashMap but at the same time, provides thread-safe behavior like Hashtable.