K-means and Kohonen SOM are two of the most widely applied data clustering algorithms.

Although K-means is a simple vector quantization method and Kohonen SOM is a neural network model, they’re remarkably similar.

In this post, I’ll try to explain, in as plain a language as I can, how each of these unsupervised models works.

K-means clustering was introduced to us back in the late 1960s. The goal of the algorithm is to find and group similar data objects into a number (K) of clusters.

By ‘similar’ we mean data points that are both close to each other (in the Euclidean sense) and close to the same cluster center.

The centroids in these clusters move after each iteration during training: for each cluster, the algorithm calculates the weighted average (mean) of all its data points and that becomes the new centroid.

K (the number of clusters) is a tunable hyperparameter. This means it’s not learned and we must set it manually.

This is how K-means is trained:

K-means is easier to implement and faster than most other clustering algorithms, but it has some major flaws. Here are a few of them:

Outliers, like the one shown here, can really mess up the K-means algorithm.

Although it’s a deep learning model, its architecture, unlike that of most advanced neural nets, is fairly straightforward. It only has three layers.

SOMs’ distinct property is that they can map high-dimensional input vectors onto spaces with fewer dimensions and preserve datasets' original topology while doing so.

The Self-Organization Process Has 4 Stages:

2. Each neuron computes its respective value of a discriminant function, which is typically the squared Euclidean distance between the neuron’s weight vector and the input vector, for each input pattern. The unit whose weight vector values are closest to those of the input is declared the winning node (the best matching unit).

We use this formula to calculate distances: 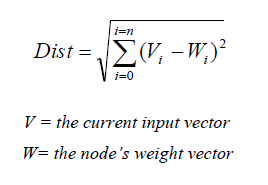 We take a row of inputs, calculate the difference between each input in that row and each neuron, square the results, and add them all up. The winning node will be the one with the smallest Euclidean distance.

3. A topological neighborhood of excited neurons emerges around the winning node.

Sj,I — the lateral distance between two neurons (j and I)

σ — the neighborhood size. The radius of a neighborhood in an SOM must decrease over time, and, usually, this is accomplished with the exponential decay function σ (t) = σ0 exp(−t /λ)

4. The network updates its neurons’ weight vectors. All excited neurons adjust their weight vectors values to become more similar to input patterns. The winning unit’s weight vectors are moved closest to the input, and we adjust the weight vectors of the units in its neighborhood too, but to a lesser extent. The farther a unit is from the best matching unit, the less it’s modified.

η(t) — is the learning rate

Tj,I(x)(t) — is the topological neighborhood

The winning neuron will have a topological neighborhood value of 1 (the distance between the winning neuron and itself is zero so exp(-S²j,I(x)/2σ²) will equal 1) which will magnify the learning rate η(t) and thus the unit will learn/change the most.

Any other neuron will have a lesser value of exp(-S²j,I(x)/2σ²) and therefore the intensity of its adjustment won't be as great.

Given that neighborhoods in SOMs must shrink over time, Gaussian is typically the neighborhood function of choice:

A SOM was trained to create 3d models of human heads (3d images of faces were fed to it as input.) The researchers used the algorithm to build face models that carry key characteristics of faces and reflect different facial expressions.

These reconstructed heads, the paper says, can be used for emotion recognition too.

This research shows that SOMs can be used to explore how financial markets organize during the critical periods of deflation and recession.