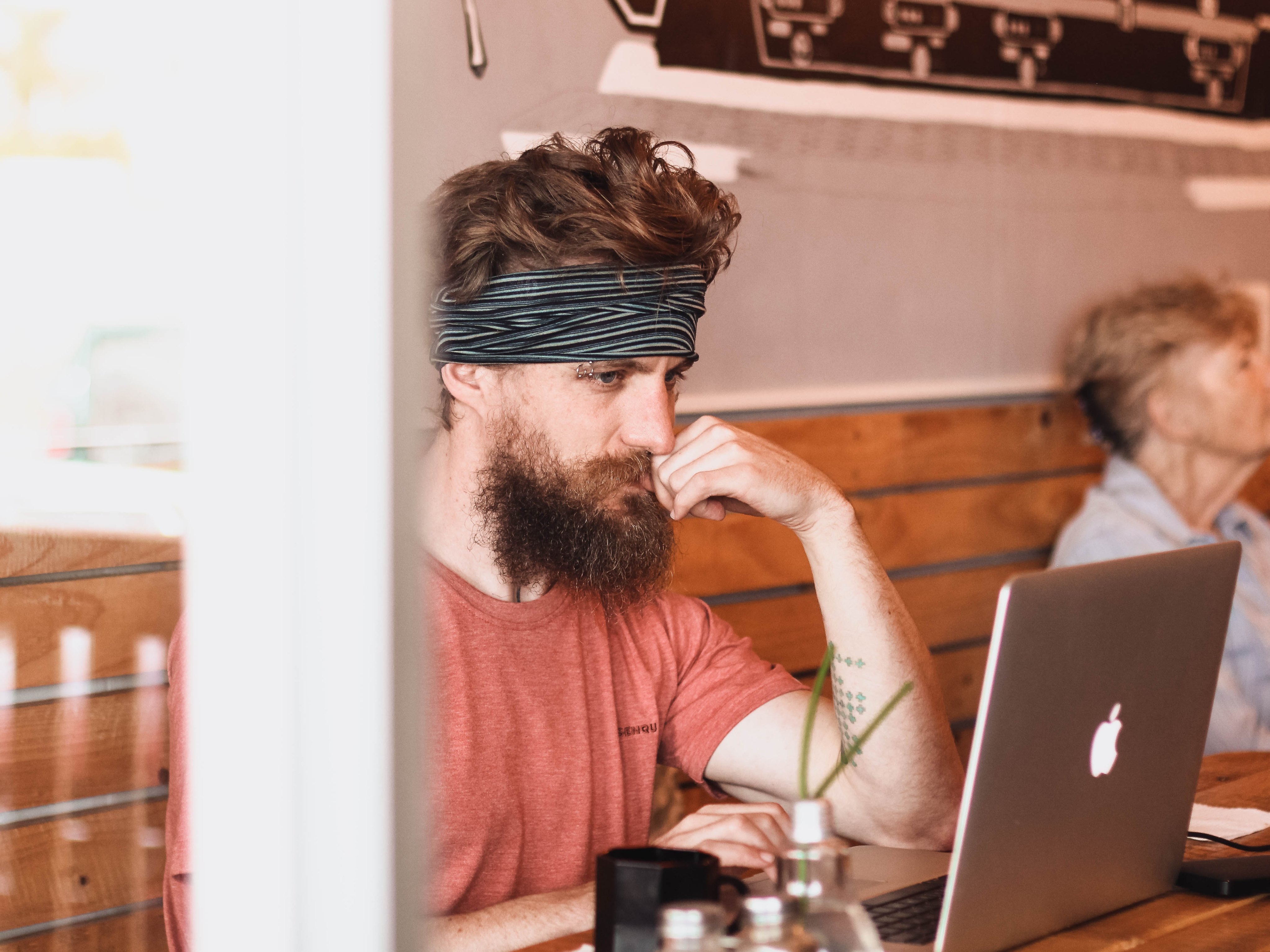 Developers were using JHipster for designing mobile apps before 'hipster' was even, like, a thing

For all those who know me, you know how much I love Java, Spring Boot, JHipster, and Ionic.

JHipster is the best thing ever. It’s a popular, fully open-source app generator and platform where you can quickly build Java apps with JavaScript front-ends.

Ionic is also a complete open-source framework where you can build cross-platform apps (hybrid) with web technology. Hybrid mobile apps, similar to native mobile apps, can be listed on app stores and installed on your mobile devices. Ionic supports PWA, which means you can ship the same app for the web to an app store.

Spring Boot is the only back-end framework currently supported, with .NET and Node.js implementations currently in development. On the front-end, Angular, React, Vue, React Native, and Ionic are all supported.

In this brief tutorial, I’ll show you to use Ionic for JHipster v4 with Spring Boot and JHipster 6.

To complete this tutorial, you’ll need to have Java 8+, Node.js 10+, and Docker installed. You’ll also need to create an Okta developer account.

You can install JHipster via Homebrew (brew install jhipster) or with npm.

Once you have JHipster installed, you have two choices. There’s the quick way to generate an app (which I recommend), and there’s the tedious way of picking all your options. I don’t care which one you use, but you must select OAuth 2.0 / OIDC authentication to complete this tutorial successfully.

The hard way is you run jhipster and answer a number of questions. There are so many choices when you run this option that you might question your sanity. At last count, I remember reading that JHipster allows 26K+ combinations!

The project generation process will take a couple of minutes to complete if you’re on fast Internet and have a bad-ass laptop. When it’s finished, you should see output like the following.

OIDC With Keycloak and Spring Security

JHipster has several authentication options: JWT, OAuth 2.0 / OIDC, and UAA. With JWT (the default), you store the access token on the client (in local storage); this works but isn’t the most secure. UAA involves using your own OAuth 2.0 authorization server (powered by Spring Security), and OAuth 2.0/OIDC allows you to use Keycloak or Okta.

Having Keycloak set by default is nice because you can use it without having an internet connection.

To log into the JHipster app you just created, you’ll need to have Keycloak up and running. When you create a JHipster project with OIDC for authentication, it creates a Docker container definition that has the default users and roles. Start Keycloak using the following command.

Start your application with ./gradlew (or ./mvnw if you chose Maven) and you should be able to log in using "admin/admin" for your credentials.

Open another terminal and prove all the end-to-end tests pass:

If your environment is set up correctly, you’ll see output like the following:

OIDC With Okta and Spring Security

To switch to Okta, you’ll first need to create an OIDC app. If you don’t have an Okta Developer account, now is the time!

Why Okta instead of Keycloak?

Keycloak works great in development, and Okta has free multi-factor authentication, email support, and excellent performance for production. A developer account gets you 1000 monthly active users for free! You can see other free features and our transparent pricing at developer.okta.com/pricing.

These are the steps you’ll need to complete for JHipster. Start your JHipster app using a command like the following:

The above command can be painful to type, so I encourage you to copy/paste or set the values as environment variables. You can also configure them in a properties/YAML file in Spring Boot, but you should never store secrets in source control.

Create a Native App for Ionic

You’ll also need to create a Native app for Ionic. The reason for this is because Ionic for JHipster is configured to use PKCE (Proof Key for Code Exchange). The current Spring Security OIDC support in JHipster still requires a client secret. PKCE does not.

Go back to the Okta developer console and follow the steps below:

You’ll need the client ID from your Native app, so keep your browser tab open or copy/paste it somewhere.

Create Groups and Add Them as Claims to the ID Token

In order to login to your JHipster app, you’ll need to adjust your Okta authorization server to include a groupsclaim.

On Okta, navigate to Users > Groups. Create ROLE_ADMIN and ROLE_USER groups and add your account to them. 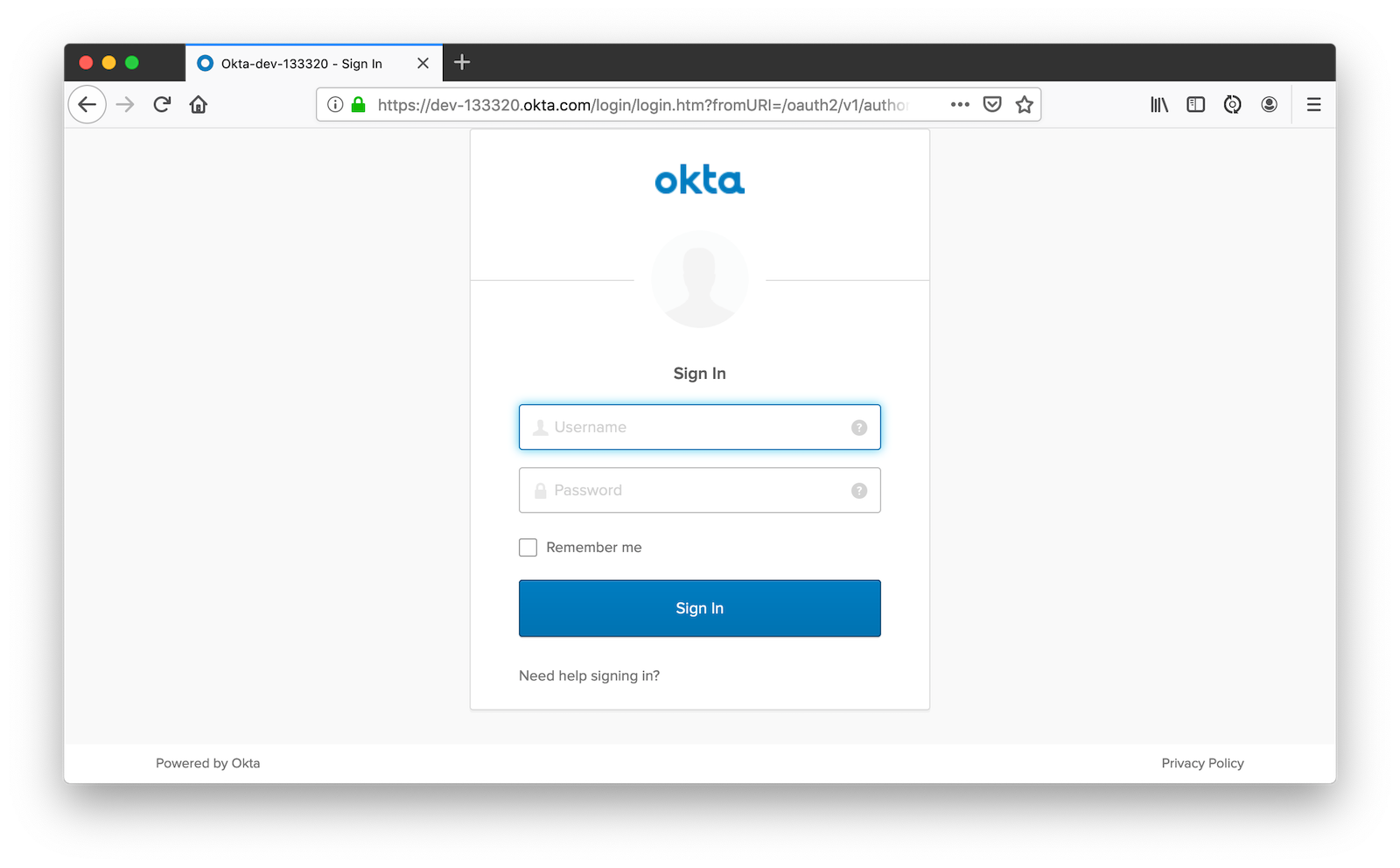 Enter the credentials you used to sign up for your account, and you should be redirected back to your JHipster app. 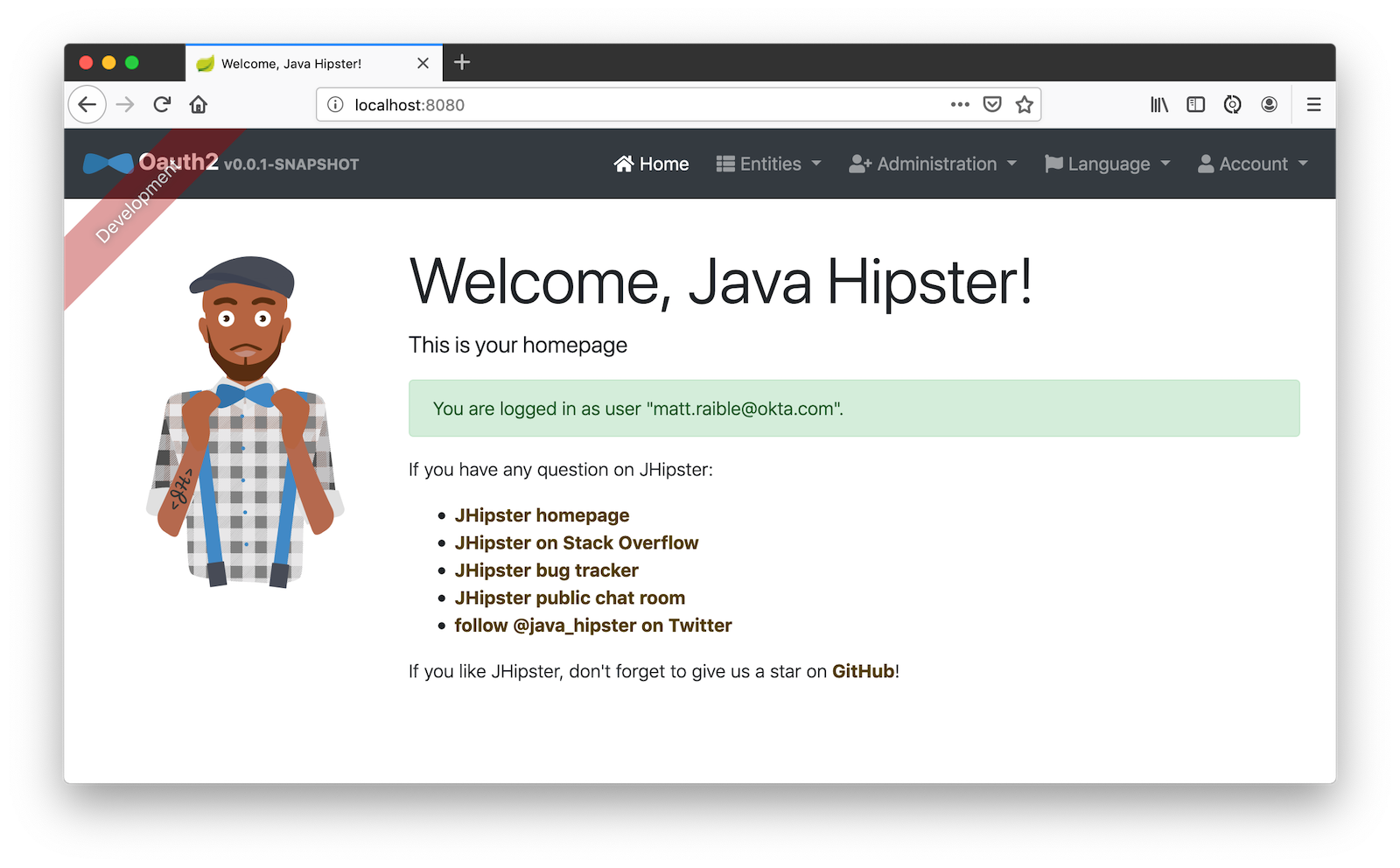 Generate Entities for a Photo Gallery

Let’s enhance this example a bit and create a photo gallery that you can upload pictures to. Kinda like Flickr, but waaayyyy more primitive.

JHipster has a JDL (JHipster Domain Language) feature that allows you to model the data in your app, and generate entities from it. You can use its JDL Studio feature to do this online and save it locally once you’ve finished.

I created a data model for this app that has an Album, Photo, and Tag entities and set up relationships between them. Below is a screenshot of what it looks like in JDL Studio. 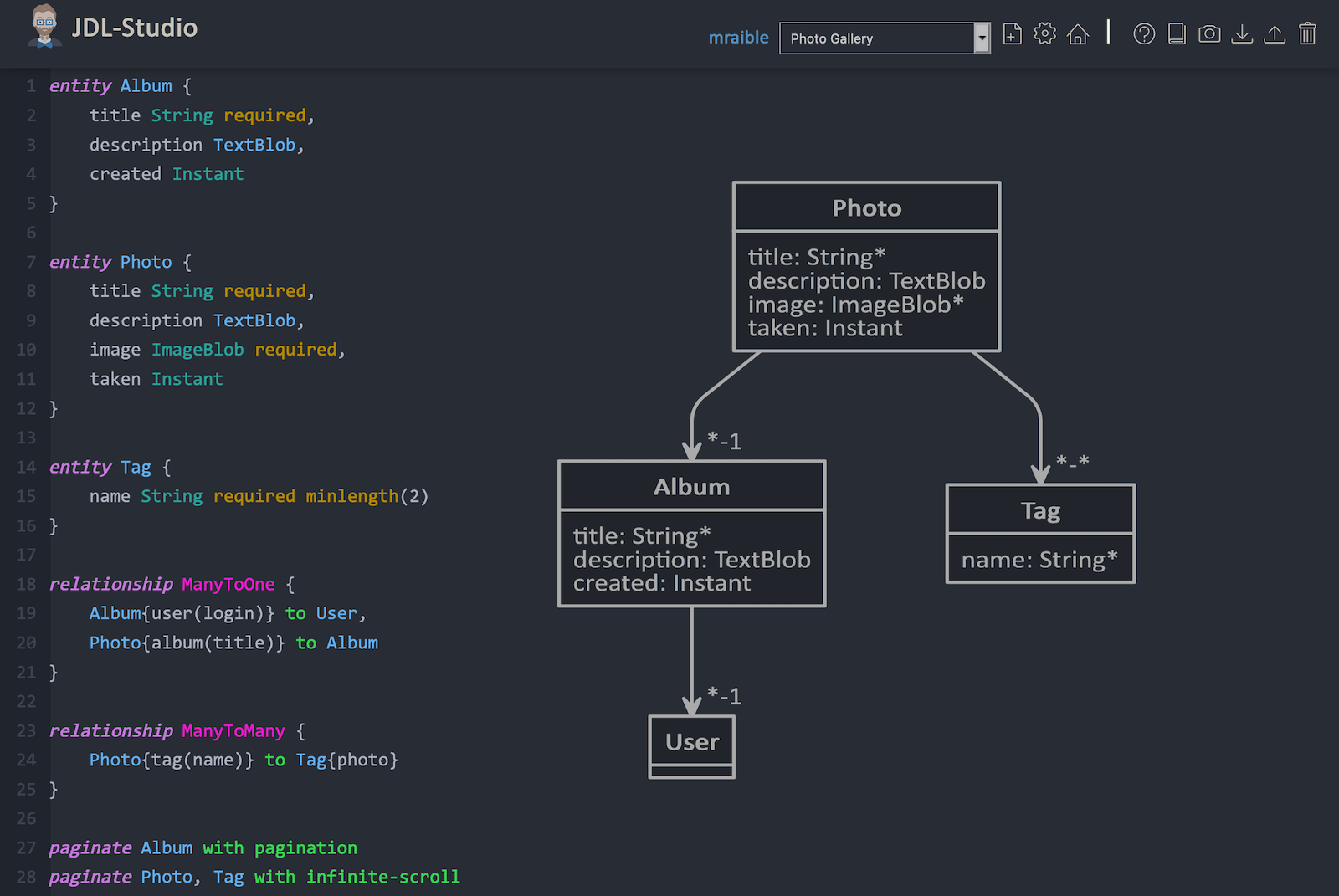 CCopy the JDL below and save it in a photos.jdl file in the root directory of your project.

You can generate entities and CRUD code (Java for Spring Boot; TypeScript, and HTML for Angular) using the following command:

When prompted, type a to update existing files.

When the process completes, restart your app, and confirm that all your entities exist (and work) under the Entities menu. 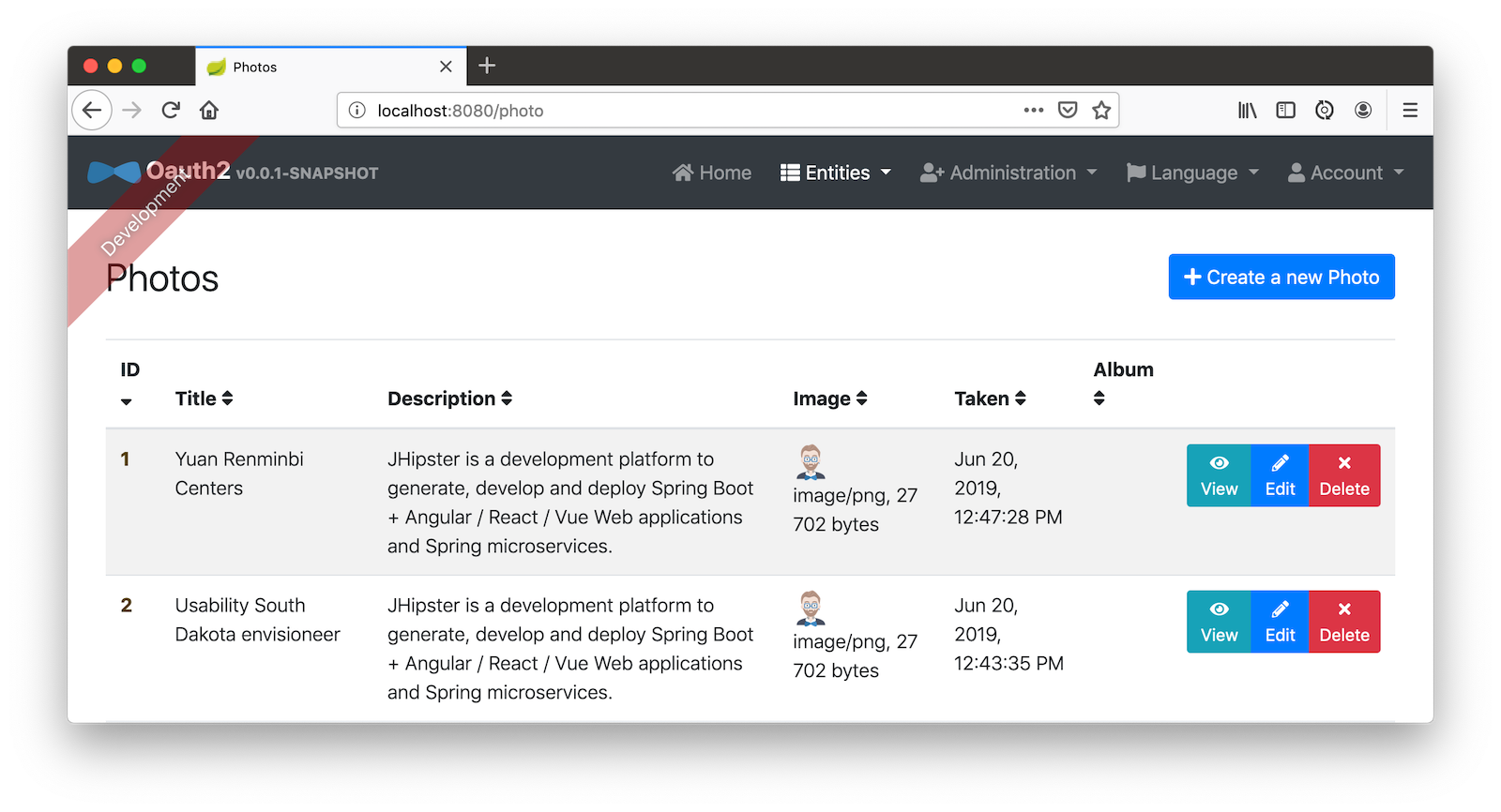 You might notice that the entity list screen is pre-loaded with data. This is done by faker.js. To turn it off, edit src/main/resources/config/application-dev.yml, search for liquibase, and set its contexts value to dev. I made this change in this example’s code and ran ./gradlew clean to clear the database.

Develop a Mobile App With Ionic and Angular

Getting started with Ionic for JHipster is similar to JHipster. You simply have to install the Ionic CLI, Yeoman, the module itself, and run a command to create the app.

If you have your app application at ~/app, you should run this command from your home directory (~). Ionic for JHipster will prompt you for the location of your backend application. Use mobile for your app’s name and app for the JHipster app’s location.

Type a when prompted to overwrite mobile/src/app/app.component.ts.

Open mobile/src/app/auth/auth.service.ts in an editor, search for data.clientId, and replace it with the client ID from your Native app on Okta.

When using Keycloak, this change is not necessary.

In order to set-up authentication successfully with your Ionic app, you have to do a bit more configuration in Okta. Since the Ionic client will only send an access token to JHipster, you need to 1) add a groups claim to the access token and 2) add a couple more claims so the user’s name will be available in JHipster.

When you are finished, your claims should look as follows.

Run the following commands to start your Ionic app.

You’ll see a screen with a sign-in button. Click on it, and you’ll be redirected to Okta to authenticate.

Now that you having log in working, you can use the entity generator to generate Ionic pages for your data model. Run the following commands (in your ~/mobile directory) to generate screens for your entities.

Go back to your browser where your Ionic app is running (or restart it if you stopped it). Click on Entities on the bottom, then Albums. Click the blue + icon in the bottom corner, and add a new album. 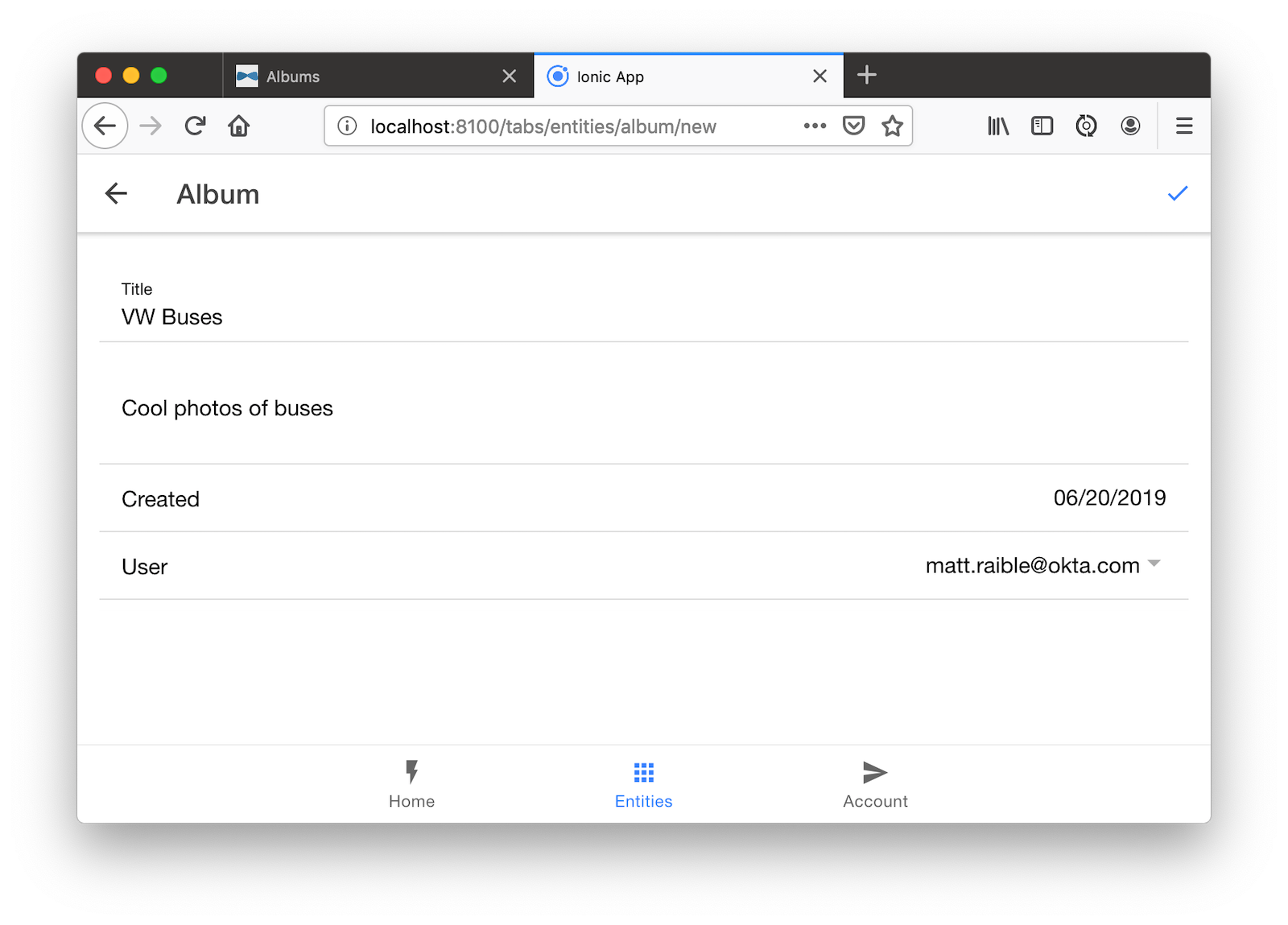 Click the checkmark in the top right corner to save your album. You’ll see a success message and it listed on the next screen. 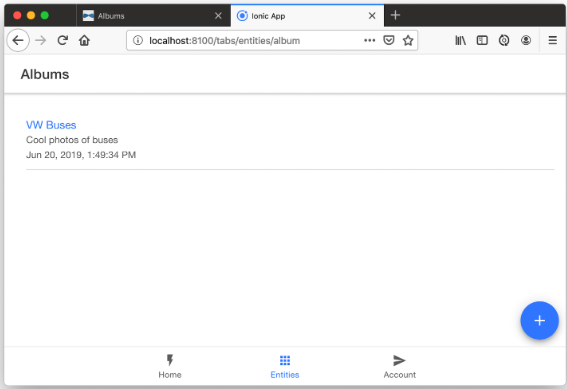 Refresh your JHipster app’s album list, and you’ll see it there too! 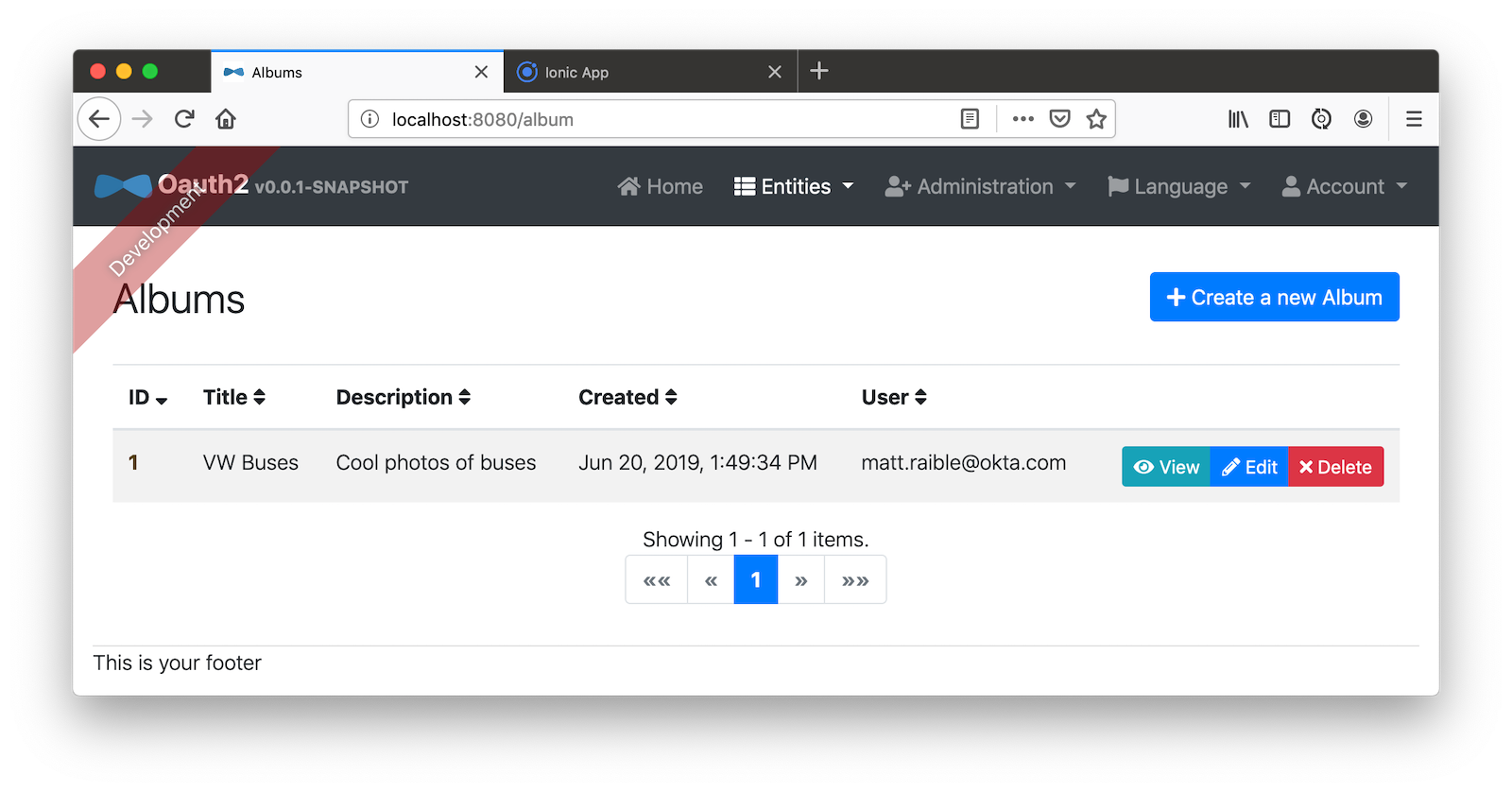 Generate code for the other entities using the following commands and the same answers as above.

Run Your Ionic App on iOS

To generate an iOS project for your Ionic application, run the following command:

When prompted to install the ios platform, type Y. When the process completes, open your project in Xcode:

If you don’t have Xcode installed, you can download it from Apple.

You’ll need to configure code signing in the General tab, then you should be able to run your app in Simulator.

Add a photo in the JHipster app at http://localhost:8080. 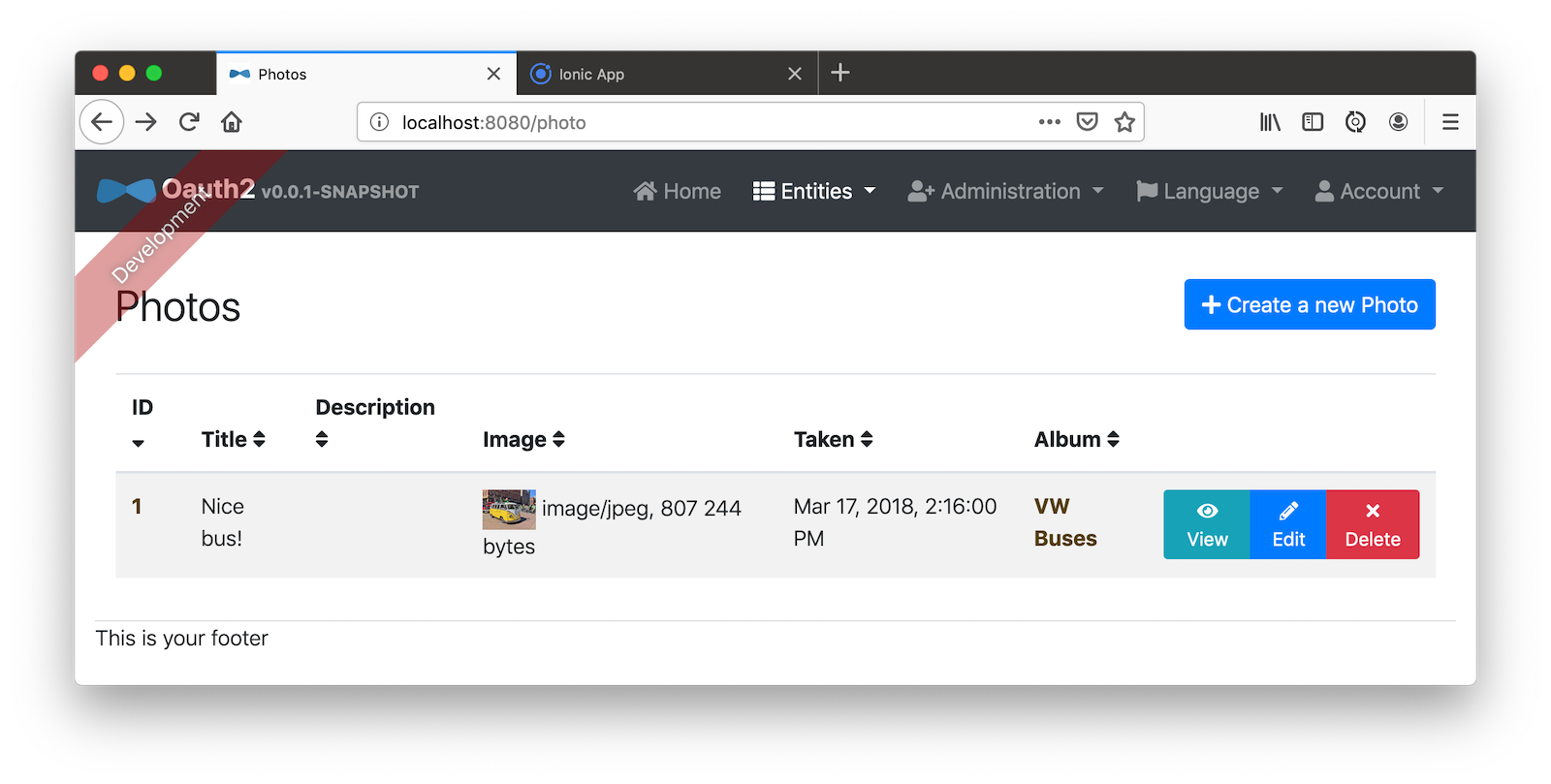 To see this new album in your Ionic app, pull down with your mouse to simulate the pull-to-refresh gesture on a phone. Looky there — it works!

There are some gestures you should know about on this screen. Clicking on the row will take you to a view screen where you can see the photo’s details. You can also swipe left to expose edit and delete buttons.

Run Your Ionic App on Android

Deploying your app on Android is very similar to iOS. In short:

Secure Your Mobile App With OIDC and Ionic for JHipster

Learn More About Ionic 4 and JHipster 6

Ionic is a nice way to leverage your web development skills to build mobile apps. You can do most of your development in the browser, and deploy to your device when you’re ready to test it. You can also just deploy your app as a PWA and not both to deploy it to an app store.

JHipster supports PWAs too, but I think Ionic apps look like native apps, which is a nice effect. There’s a lot more I could cover about JHipster and Ionic, but this should be enough to get you started.

You can find the source code for the application developed in this post on GitHub.

I’ve written a few other posts on Ionic, JHipster, and Angular. Check them out if you have a moment.

Build Mobile Apps with Angular, Ionic 4, and Spring Boot was originally posted on the Okta Developer Blog on June 24, 2019.