Once before, we had to implement a software service for *nix systems to provide real-time and historical insights on the traffic passing through them.

At Plexteq, we develop complex networking and security applications. We would like to share how we approached the challenge and show what are important points to pay attention to when developing high-performance network applications.

The following are just a few of the strict requirements we met:

Fast operation and a small memory footprint were the essential requirements, as the traffic analyzer clearly should have been an agent that helps understand the traffic flows better, without hindering the main processes those nodes were supposed to run. It was also decided to use C/C++ for the implementation.

The customer wanted to be able to run analytical processing and required the following dimensions to be supported: 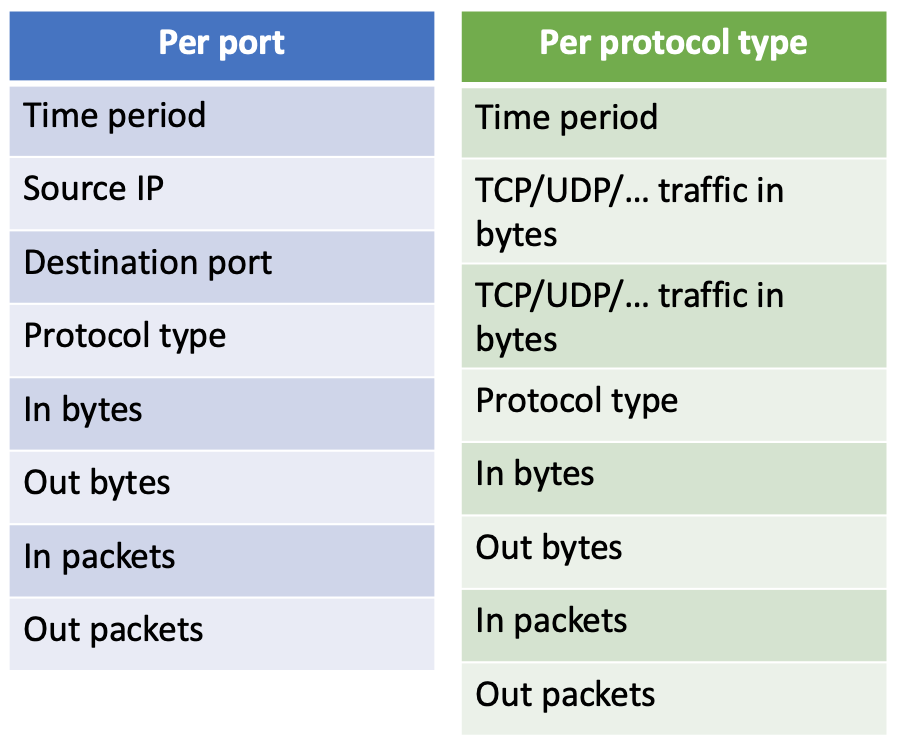 Following the given dimensions, it narrowed down the gathering of information about input/output network packets traveling at any time, including their type (i.e., UDP, TCP, ICMP) and size.

The high-level architecture looked as shown below. The parts in green are something we had to deliver. All other components are external and interact with the traffic analyzer through the data storage layer.

Under the storage layer, we understand persistent storage in an interoperable format, to which the traffic analyzer had to flush the statistics. It was essential to make that format usable by other components.

Therefore, our three significant challenges were:

Let’s briefly examine how we solved all of these problems above.

In Linux, there are many tools to grab the traffic - tcpdump, wireshark, iptables in the logging mode, and many more.

We have found that the most popular tools, such as tcpdump and wireshark, are pretty heavy on resources. So, using them for piping the output to some file or database takes a lot of system resources (like up to 60% of CPU), which was not a good fit for us.

While tcpdump is very powerful, something like the example below didn’t work for us from the performance considerations:

That command asks the kernel to log ICMP type 8 packets. The target file will consist of the following records for every packet received:

A technique such as this is resource-heavy as it dumps all packet metadata to a file. It completely exhausts I/O and free disk space. Another issue is that to make iptables log usable for analytical processing, we had to develop another tool for parsing that output and storing it in a format that matches the given requirements.

To summarize the issues with the approaches stated below:

So it seemed like the existing means weren’t a match, and we needed to build a new bicycle. As passionate developers who love just that, we were quite excited. 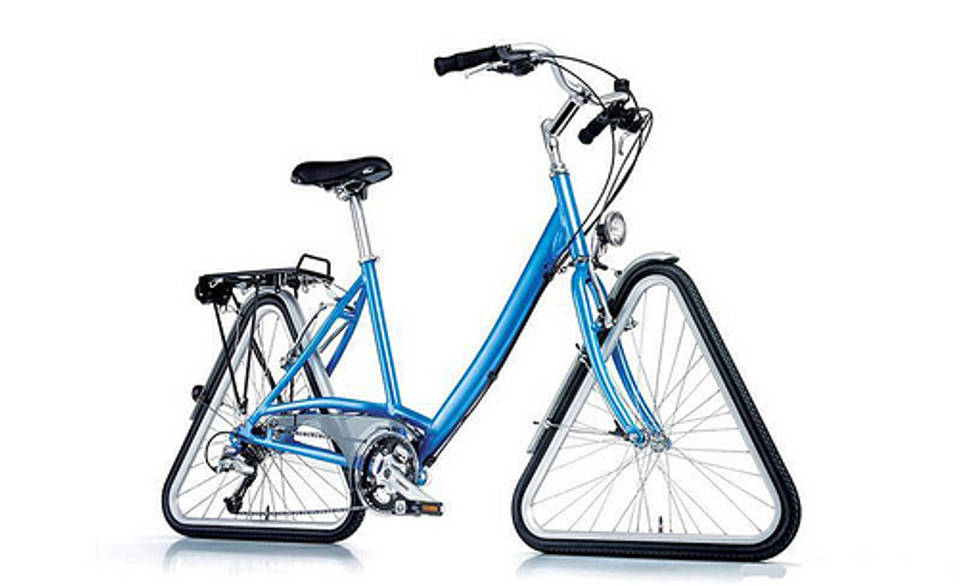 Okay, so we want to capture traffic from the kernel, how do we accomplish that?

Applications that use raw sockets can read any inbound network packets, including those headed to other applications running on the system. Raw sockets provide a way to bypass the whole network stack traversal of a packet and deliver directly to a listening application.

To see what happens when we read data from sockets, let’s use this C program that sniffs packets entering the system and prints out some information about the packet as an example.

Now, with raw sockets, all packets coming in over the server’s network device can be read. Applications that open raw sockets have to filter out packets that are not relevant by parsing the TCP headers.

Drawbacks of the raw socket approach are:

While the raw socket approach is a viable one, we did decide to investigate other options available. Nevertheless, we think that developers who are practicing their network programming skills should give raw sockets a try, at the suggestion of Ryan Dahl:

"You can never understand everything. But you should push yourself to understand the system" 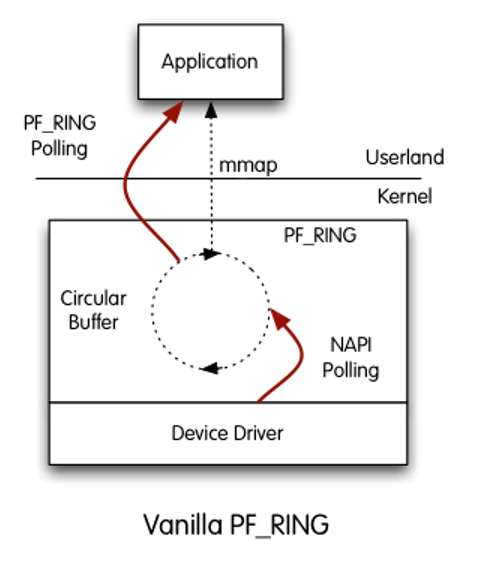 PF_RING is a Linux kernel module and user-space framework that supports high-throughput packet capture by using a kernel module and modified network device drivers. It makes use of a ring buffer under the hood that’s available to user-space, and requires applications to use its API or a modified version of libpcap.

In a nutshell, it allows you to bypass the kernel and read directly from the wire. Because the Linux kernel has too many bells and whistles, it presents a kind of “bottleneck” for high-volume traffic processing. For instance, vanilla Linux kernel can process up to 1-2Mpps traffic on decent hardware. At the same time, PF_RING developers claim it can process up to 15Mpps.

Therefore the PF_RING solution might be a perfect match for building a high-throughput network software that runs under specific hardware like a network router or firewall. However, it’s overkill for a general-purpose traffic stats collecting application that we were implementing.

There are quite a lot of 3rd party libraries available. We have picked a few of them and ran a synthetic test to examine how many packets they may pump through. And the winner is: libpcap.

PACKET_MMAP is a Linux API for fast packet sniffing, available in vanilla kernels since version 2.6. It utilizes a circular buffer mapped in user space (yay, no kernel to userspace copies which means no context switches!) for sending or receiving packets. Performance-wise, it processes faster than raw sockets.

Plugging and using libpcap is actually a very simple process. There are only four easy steps:

Let’s throw in some code and see how to get it to work:

That’s already something! It satisfied our needs, and we moved further along to solve other challenges we had.

For storing network traffic statistics, we were looking for a solution that matches the following requirements:

We didn’t want to use a standalone full-fledged network SQL server, which would have been a significant resource overkill. As we had a previous experience with SQLite, we decided to go for it, as it perfectly matched our requirements.

The only significant drawback of SQLite is the lack of thread-safety on data writes - only one thread can modify data at a time. The reason is simple - SQLite, in a nutshell, is a fopen replacement, and there is no built-in write concurrency management.

Working with SQLite is straightforward.

The following sample shows how to open/close a database.

Inserting data is easy-peasy too.

More complicated samples are available on the official SQLite documentation.

Since we did pick up a toolchain to grab the traffic and store the stats, we moved forward to finally glue it altogether.

We started with the most straightforward implementation so that the callback function delegates packet metadata to an aggregator module that flushes data to an SQLite every 500 milliseconds. 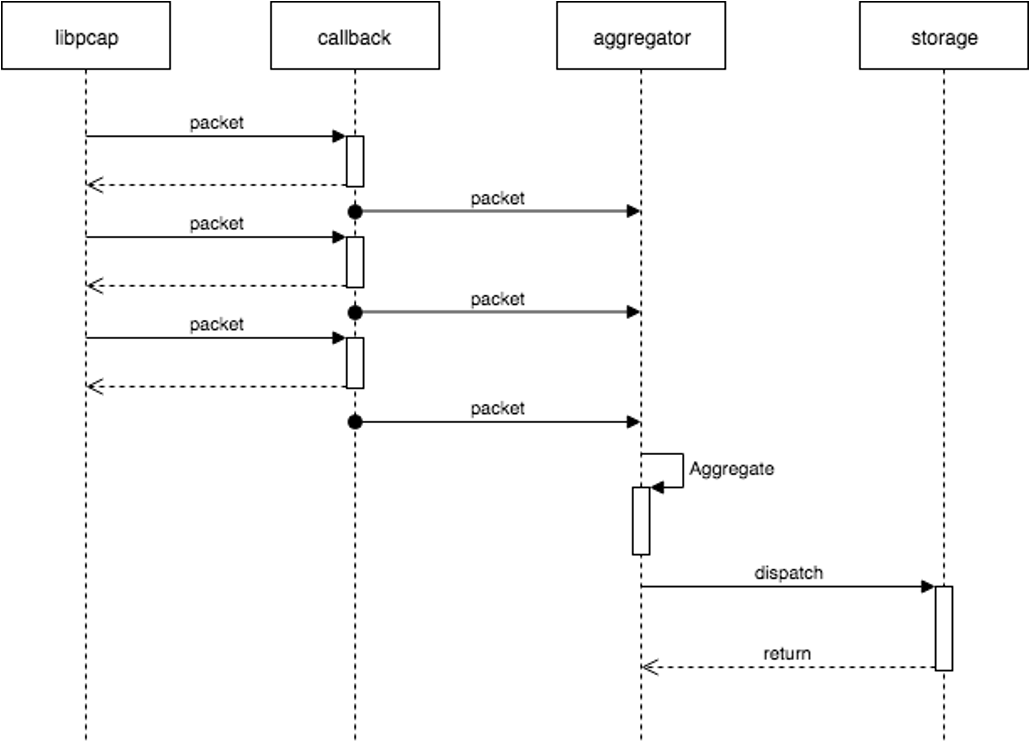 However, we hit a bottleneck: the aggregator was not following up on traffic bandwidth that is more than 25Mbps. We got a continually increasing delay between incoming traffic and flushed stats.

This is a classic example of a producer-consumer problem. Where libpcap is a high-performing producer and aggregator is a single slow consumer.

The solution was straightforward: 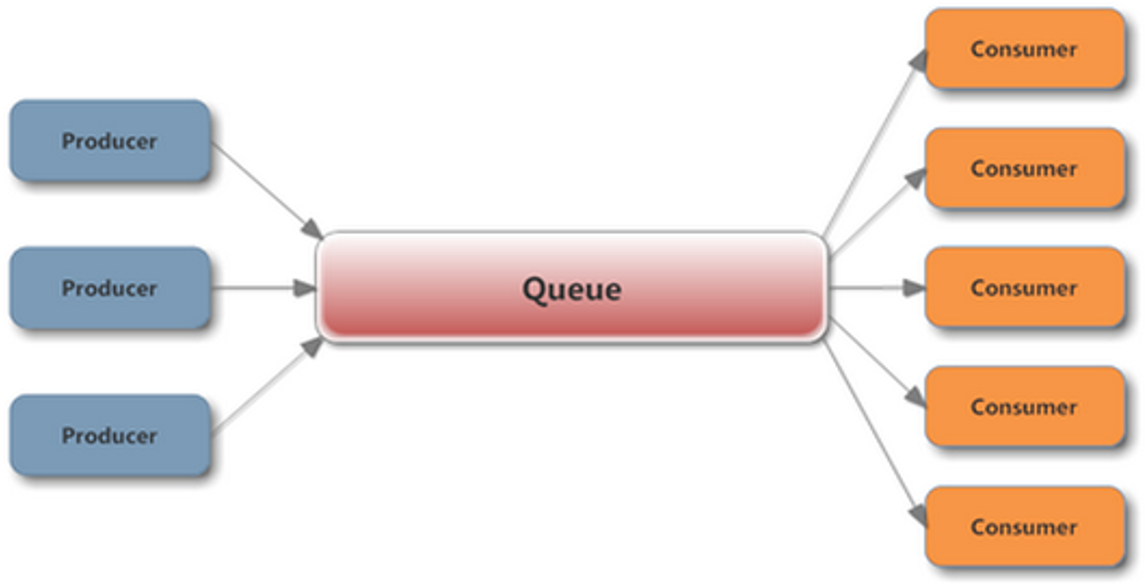 Such a problem could be solved using these different approaches:

Both the solutions mentioned applied to our case. Tests didn’t reveal a leader - both of them showed almost the same performance level.

We decided to go with a blocking queue. We picked up an implementation from the APR (Apache Portable Runtime) library used by the Apache web server as it perfectly matched the footprint and cross-platform requirements.

100+% CPU utilization didn’t look good. We profiled the app and found that CPU time was “eaten” by a tremendous amount of malloc calls.

Our problem was in allocating a small memory chunk to store packet metadata for every packet we were getting from libpcap. Therefore, we focused on reducing the malloc calls.

We redesigned the layout of our structures, but we still had many malloc calls hogging the CPU. We decided to use the memory pooling technique. This way, memory allocations within a single batch persisted to an SQLite to be performed against a preallocated pool.

As a result, we got a single large allocation completed upon a batch initialization. All the subsequent allocations cost dropped to pointer arithmetic. The memory release for the packet metadata time was also simplified to just one operation.

There are multiple open-source memory pool implementations available. However, we did pick up the one from the APR library as we were already using it for blocking queues.

The only drawback of the memory pool lies in the lack of possibility to free the individual elements. So it’s not possible to reuse previous allocations on it.

The integration of memory pooling allowed us to get rid of the malloc bottleneck. On four-core Xeon 2.8Ghz, we got the following testing results:

CPU usage of 35% on the BSD wasn't acceptable for us. We went further and profiled our solution thoroughly.

We indeed used POSIX mutexes for merging statistics coming from callbacks to guarantee the batch's consistency. It was the right time to improve it!

Investigation has shown that:

You may ask why they have different implementations - it’s because POSIX is a standard. It doesn’t mandate a specific implementation. It just requires implementations to conform to the defined contract. Therefore, different operating systems are free to implement in the way they decide. 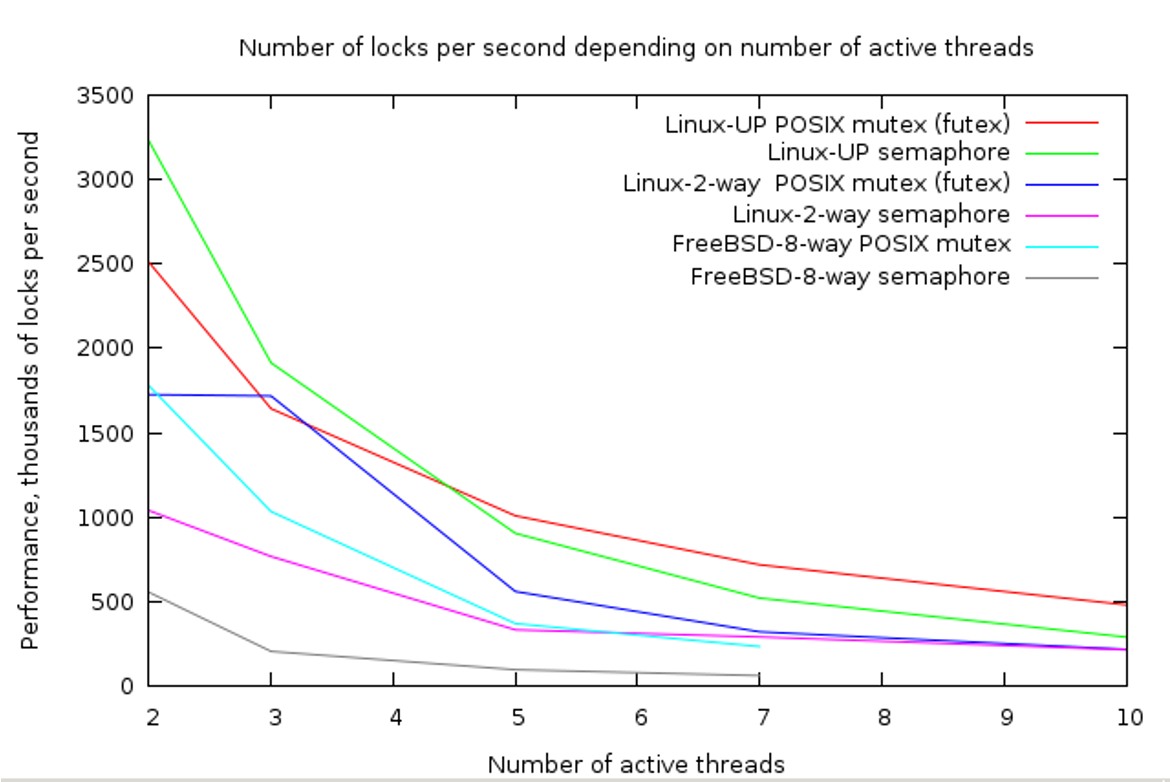 That brought us to our conclusion about why FreeBSD’s behavior varied from the one we’ve been observing on Linux.

The next step was to find an improvement to get rid of costly thread synchronization primitive.

If we check the common synchronization approaches, we’ll find that there are two main groups:

Spinlocks cause the calling thread to wait in a loop ("spin") while repeatedly checking if the lock is available, instead of making a context switch and yielding execution to another thread. Since the thread remains active but is not performing a useful task, the use of such a lock is a kind of busy waiting.

Since our target critical-section didn't do I/O but just pointer operations and arithmetic operations, it was reasonable to use the spinlock as the cost of context switch is times more expensive.

Developers may try the spinlock by using a pthread_spin_lock or use CAS operations provided by compiler harnesses.

Such results were acceptable for both platforms.

Eventually, this project was open-sourced by our team and currently is available on GitHub. Check it out here: https://github.com/plexteq/PQTrafficCollector.