The k3s is a lightweight Kubernetes distribution by Rancher Labs. Currently, under early stages of development, the distribution aims to support the deployment of complex software to smaller IT facilities, so-called 'Edge Data Centers." In this article, we will demonstrate how to install k3s in an Ubuntu virtual machine (VM) in the Microsoft Azure cloud and how to deploy an example application developed using Spring framework in the k3s environment.

The background information introduced below is based on a recent Rancher Labs online meetup "k3s: The Lightweight Kubernetes Distribution Built for the Edge." For additional details see the presentation slides and video recording of the meetup available from that link.

An edge data center (also see this article) is typically characterized by having a small hardware footprint, a small number of users and adjacency between the data center and its users. A major advantage of edge data centers is that they have faster response times than their centralized counterparts. Due to reduced latency, they are suitable to deliver cached streaming content to local users or serve as clearinghouses for time-sensitive data generated and used by IoT devices.

There is an increasing demand to use Kubernetes for deployment and management of containerized software in edge data centers. However, there exist challenges specific to the infrastructure in the edge. In particular:

The k3s is a streamlined Kubernetes distribution developed by Rancher Labs to address those and similar challenges. The k3s:

In k3s, the following have been removed from the core Kubernetes distribution:

Organization of the Article

This git repository contains all the code used in the sample application.

To demonstrate installation, we first created a relatively low-end Ubuntu 18.04.1 VM in Azure cloud that has a single core CPU, 2GB memory and 4GB HDD. In Azure terminology, that is a "Standard B1ms" server.

The VM is named VMUbuntuOne, where we also created a user named adminUser that has sudo privilege. After logging on our server as adminUser, let us create a download folder.

Let us make sure wget is already loaded:

After wget completes the download, we should have k3s binary under ~/downloads.  Let us make it executable and then move it under /bin:

Because /bin is already included in PATH

Let us start k3s in the background:

Follow the start-up logs. After seeing "k3s is up and running," run a basic test:

Also, let us look at our node by entering

Congratulations! We have already installed k3s and started the server. It is that simple!

Let us now develop a simple application with the Spring framework and deploy it in k3s. Our application will provide a REST (representational state transfer) interface to a Derby network database. For the sake of the example, we will assume that a table in the database stores key/value pairs that can be used as configuration parameters for various software components and our Spring-based application, named configuration-service, provides a web front-end to access that table.

The application will be deployed inside a k3s pod in our VM, where the VM will also host the database as shown in the diagram below. 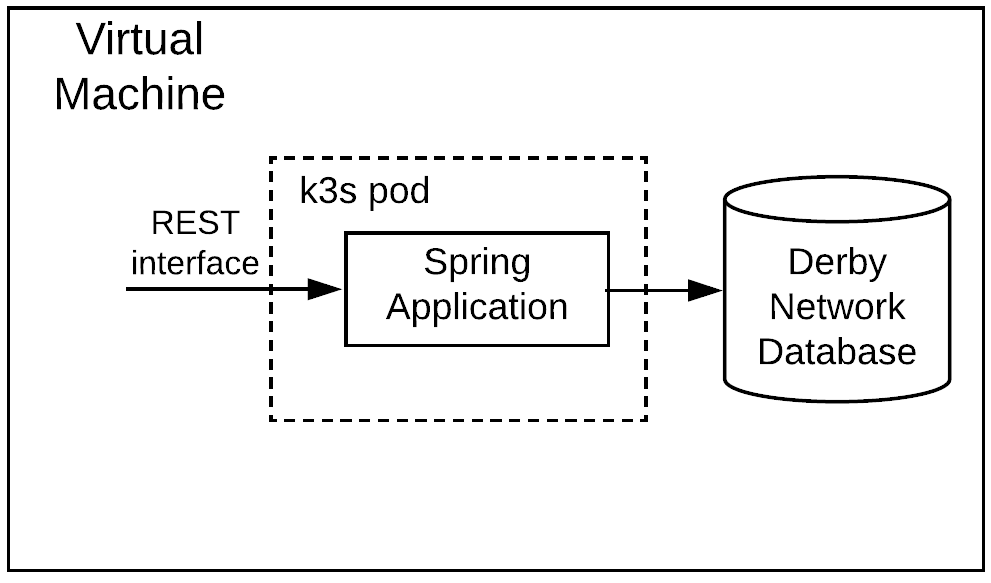 The relational database has a table called PARAMETERS with two columns:

The Spring application has the following class model (similar to the microservice pattern we followed in a recent article): 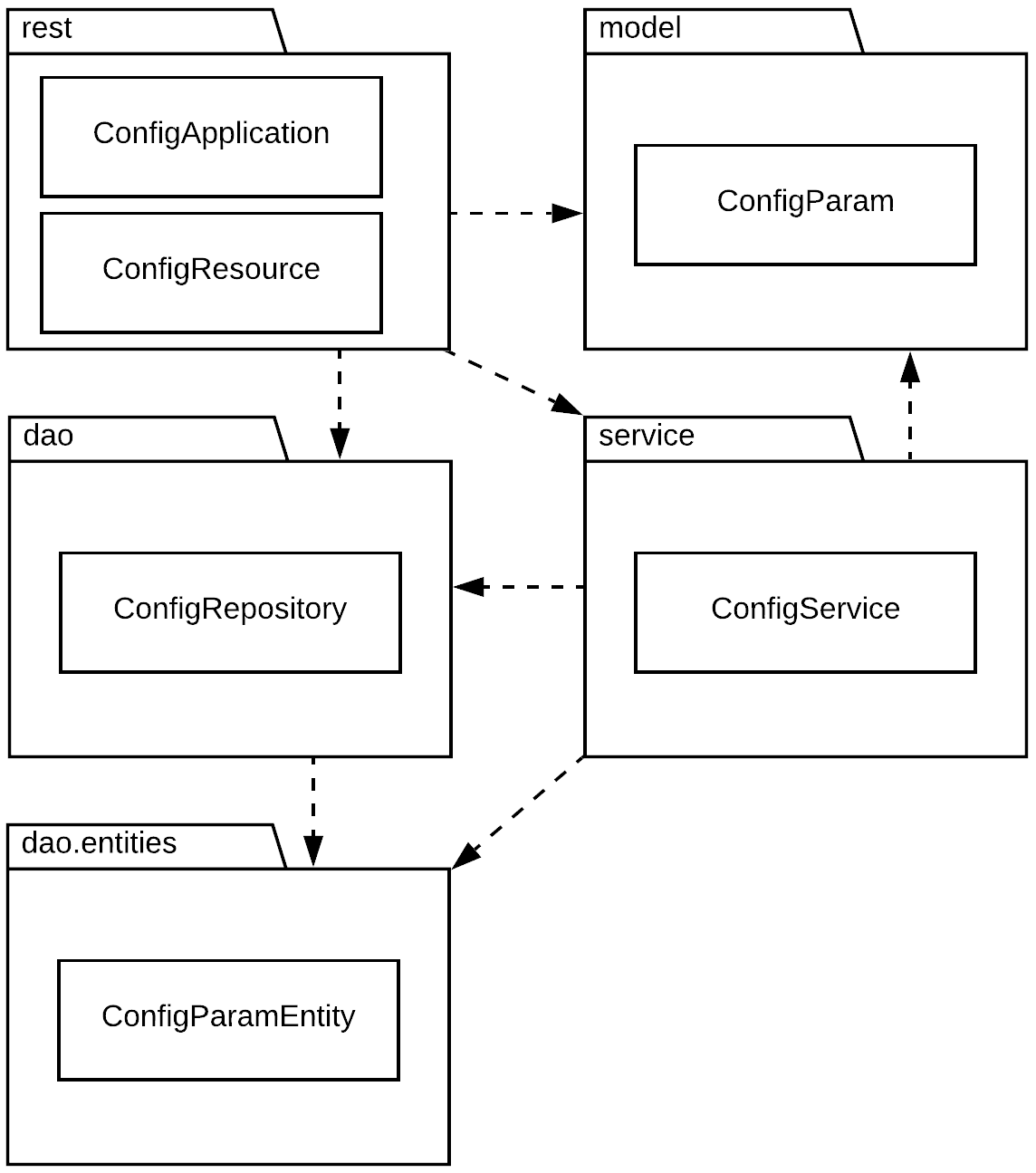 A rest package is the entry point for web service calls and consists of ConfigApplication, which performs basic application setup, and ConfigResource, which generates the response for various REST calls.

The ConfigService in the service package serves as an intermediary between the rest and dao packages and interfaces with the ConfigRepository to create, view, and update key/value pairs according to the requests coming from its client, ConfigResource.

The design above implements the Model and Controller in a Model-View-Controller pattern. The View is omitted for simplicity and the test of the REST interface will be done via curl calls as shown later.

We will also use Derby Network Database version 10.14.2.0 with client version 10.10.1.1. The development environment is Mac OS.

The file system structure for the application development environment is as follows.

This file represents an entity class corresponding to the PARAMETERS table. We rely on the Spring Data JPA framework for the implicit definition of findAll and findById queries.

This class represents a key/value model. It has similar attributes to the ConfigParamEntity class.

The setConfigParam method creates a new key/value pair or updates the value if the key already exists. This method utilizes the built-in save method supplied by JpaRepository.

As the main entry point for the application, this class performs various setup tasks. In particular, @EntityScan and @EnableJpaRepositories designate the base packages for JPA entities and repositories, respectively. We also declare the ConfigRepository instance, to be auto-injected by Spring, and define the service()   method to initialize the ConfigService and return it. Here we also give the main entry method for the application and indicate the name of its configuration file (configuration-application.yaml, to be reviewed later).

logback.xml: This is a simple log configuration file. Details are omitted. Please see the git repository that contains all the files discussed in this article.

The application context path is defined as k3sSpringExample, which will precede any web service endpoints exposed by the application.

Our image will be built on the openjdk:8-jdk-alpine image. The original archive will be copied to app.jar and run as an executable jar.

The Maven coordinates of our application are org.k3s.demo:configuration:1.0. We use the Spring version 2.1.2 and Spring Cloud Greenwich releases.

Lastly, we provide build plugins. The first one is the Spring Maven Plugin. The other one is the Dockerfile Maven Plugin from Spotify. Note that konuratdocker/spark-examples is the name of my personal Docker repository, to be replaced with yours if you intend to run those examples. We name the Docker image configuration-service.

Now, we will build the application and export the Docker image for deployment into k3s pod. Go to the application development root folder where pom.xml resides and execute:

Now, if we run

we should see Docker image of our application has been created:

Let us run the following command to export the image as a tar file:

configuration-service.tar to the Ubuntu VM where k3s has been installed. For example,

Preparing the VM For Deployment

We're back in the Ubuntu VM where k3s has been installed. The Derby network database used by the application has to be separately installed. That is shown next.

Make sure unzip is installed in the VM, e.g.

Note that if unzip is not installed, you can install it via

We also need to install jdk8. For that purpose, execute

After installation is done, verification can be done by running

Move the downloaded zip file under /opt and unzip it:

At this point, Apache Derby database has been extracted under /opt/db-derby-10.14.2.0-bin.

Because we no longer need the zip file, remove it:

The following commands will start the Apache Derby database. Because it is installed under /opt, we need to perform those instructions as root.

Now, the database has started. We need to execute the following commands only once, in order to create the table ('>ij' indicates the prompt for Derby ij utility).

For verification, if you execute show tables, it will list the newly created table under the demo schema. That is,

You can exit the ij utility:

At this point, the database has started and the PARAMETERS table has been created. You can exit the root shell.

Note: When not needed, the Derby database can be stopped by executing the following commands:

One of the ways to deploy a Docker image in a k3s pod is via a direct copy of the exported tar file to /var/lib/rancher/k3s/agent/images/ folder followed by k3s kubectl create -f <deployment.yaml>  command. For this purpose, consider the previously copied configuration-service.tar file. Let us assume that the file is under the home directory of the adminUser.

Execute the following command as the adminUser to create the image deployment folder /var/lib/rancher/k3s/agent/images/and to move the image there. (Unless otherwise noted, the commands in this section should be executed as adminUser.)

Now, if we start k3s and execute crictl command we should be able to see the image. (If k3s processes are already running, identify their process ids via grep k3s and kill them before starting k3s again!)

You should see that the application's image is listed:

Let us now create the deployment file in yaml format.

Inside the vi editor type the following:

Observe that the file consists of three sections. Starting from the top, the first two are the service definition for our database and the corresponding endpoint definition, which declare that the service is available in localhost (127.0.0.1) at port 1527. (For a general reference in that topic, see this original Kubernetes documentation.) The third section consists of the deployment definition for the actual application. Here, observe that the environment variables DB_HOST and DB_PORT are assigned values referencing the database service and its endpoint. The SERVER_PORT environment variable and the corresponding containerPort definition indicate the port number the REST endpoint will listen to. Finally, the image attribute references the Docker image we had copied under /var/lib/rancher/k3s/agent/images/.

Now, we can deploy the application as follows.

You should see a response as follows.

Take a note of the values under NAME (for pod name) and IP columns. Then, the application logs can be observed by executing:

To test that the application is running properly, we can utilize the IP address listed above to send requests via curl:

Note: If you make any mistakes and want to redeploy the application, execute the following to remove original deployments.

In this article, we demonstrated how to install k3s, a lightweight Kubernetes distribution from Rancher Labs, in an Ubuntu VM in the Microsoft Azure cloud. We also developed a sample application using Spring framework and deployed it in a k3s pod. The application integrated with an Apache Derby network server external to the pod.

Given that the main purpose of k3s to be lightweight, we intentionally chose a relatively low-end VM as our testbed with a single core CPU and 2GB memory. Although we have not run any formal load tests to quantify the performance, it appears that k3s starts up fast. The response times of the application and the database were also satisfactory while running alongside k3s.

The k3s technology is still in early stages of development and from our experience so far, it is on the right track!