A Markov chain named by Andrey Markov, is a mathematical system that representing transitions from one state to another on a state space. The state is directly visible to the observer. It is a random process usually characterized as memoryless: the next state depends only on the current state and not on the sequence of events that preceded it. This specific kind of "memorylessness" is called the Markov property.

Let's talk about the weather. we have three types of weather sunny, rainy and cloudy.

Let's assume for the moment that the weather lasts all day and it does not change from rainy to sunny in the middle of the day.

Using above expression, we can give probabilities of types of weather for tomorrow and the next day using n days of history.

The larger n will be problem in here. The more statistics we must collect Suppose that n=5 then we must collect statistics for 35 = 243 past histories Therefore we will make a simplifying assumption called the "Markov Assumption".

So this now has a profound affect on the number of histories that we have to find statistics for, we now only need 32 = 9 numbers to characterize the probabilities of all of the sequences. (This assumption may or may not be a valid assumption depending on the situation.)

Tabel2: Probabilities of Tomorrow's weather based on Today's Weather

“What is w0?” In general, one can think of w as the START word so P(w1w2) is the probability that w1 can start a sentence.

For first-order Markov models we can use these probabilities to draw a probabilistic finite state automaton. 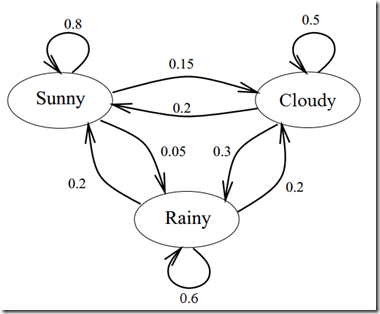 1. Today is sunny what's the probability that tomorrow is sunny and the day after is rainy

First we translates into

A hidden Markov model (HMM) is a statistical Markov model in which the system being modeled is assumed to be a Markov process with unobserved (hidden) states. A HMM can be considered the simplest dynamic Bayesian network. Hidden Markov models are especially known for their application in temporal pattern recognition such as speech, handwriting, gesture recognition, part-of-speech tagging, musical score following, partial discharges and bioinformatics.

Well suppose you were locked in a room for several days and you were asked about the weather outside The only piece of evidence you have is whether the person who comes into the room carrying your daily meal is carrying an umbrella or not.

Table 3: Probabilities of Seeing an Umbrella

The equation for the weather Markov process before you were locked in the room.

Now we have to factor in the fact that the actual weather is hidden from you We do that by using Bayes Rule.

Where ui is true if your caretaker brought an umbrella on day i and false if the caretaker did not. The probability P(w1,..,wn) is the same as the Markov model from the last section and the probability P(u1,..,un) is the prior probability of seeing a particular sequence of umbrella events.

Assume that for all i given wi, ui is independent of all uj and wj. I and J not equal