In many modern software products, there is a need to accept heavy traffic load, perform multitasking, and run procedures in parallel. Systems have multiple execution cores for executing multiple tasks at the same time rather than sequentially with multithreading engineering.

This makes the system faster but it also causes issues, like shared memory problems. Solutions like locking can protect shared memory values and are fully supported by JVM languages. The drawback is that there is a more complicated code implementation. On the other hand, Akka Actor model is an alternative. The Actor Model provides a higher level of abstraction for writing concurrent and distributed systems.

It also alleviates the developer from having to deal with explicit locking and thread management, making it easier to write concurrent and parallel systems. Actors are objects that encapsulate state and behavior and communicate exclusively by exchanging messages, which are placed into the recipient’s mailbox. Many companies and open-source projects use Akka to develop concurrent systems; Paypal's transaction handling is a very interesting case study.

This is an article about routing in Akka — it would be nice to have the minimum familiarity with Actor model and Scala to get the most out of it.

How to Implement Routing in Akka

In some cases, we may need a specific type of message routing mechanism for specific requirements like:

In Akka, there are many routing strategies, such as :

How Routing Is Designed Within Akka

Routers look like normal actors, but in reality, they are implemented in a different way. Routers are designed to be extremely efficient at receiving messages and passing them quickly on to routees. A normal actor can be used for routing messages, but an actor's single-threaded processing can become a bottleneck. Routers can achieve much higher throughput with optimization to the usual message-processing pipeline that allows concurrent routing.

This is achieved by embedding routers' routing logic directly in their ActorRef rather than in the router actor. Messages sent to a router's ActorRef can be immediately routed to the routee, bypassing the single-threaded router actor entirely. The cost to this is, of course, that the internals of routing code are more complicated than if routers were implemented with normal actors.

Below I present a simple routing implementation with RoundRobin and Broadcast.

At first, we need to create an sbt Scala project in our IDE — I prefer IntelliJ — with Akka dependencies.

Let's begin by creating an example of a Round Robin Router. As we said before, in this case, the router will send messages one by one to all actors in a loop, as described in the following schema. 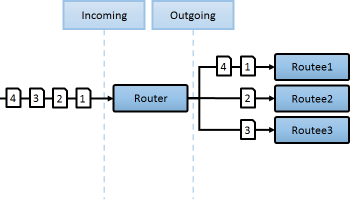 At first, we will create an Actor let's call it RoundRobinActor.

Then, we will test it by creating a RounRobinPool of two actors and route four "hello" messages.

As we can see in the console, the message routed all routees with the Round Robin algorithm by creating a loop. 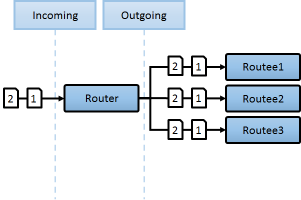 Again, we will create an Actor; let's call it BroadcastActor.

Then, we will test it by creating a BroadcastPool of three actors and route the message "hello."

As we can see in the console, the message broadcasted successfully to all routees.

This article was an introduction about message routing in Akka with Scala.