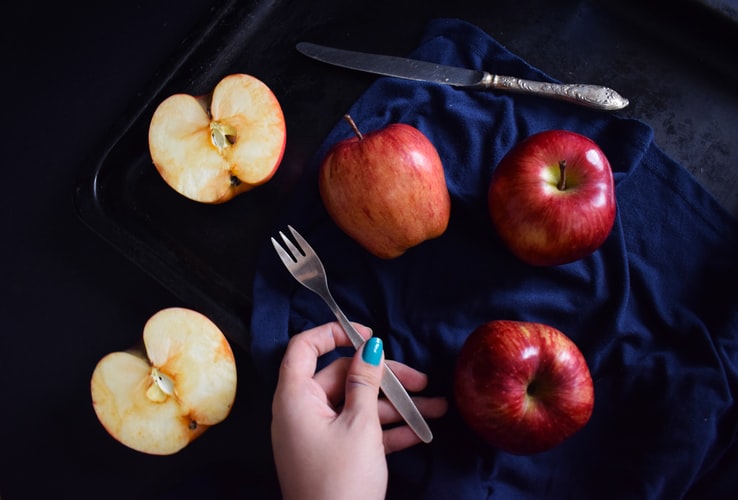 This core is less useful.

With increasing business demands, we now develop very large and complex projects that take more time to build and deploy. Whenever QA reports any issue, we need to debug or fix it and then deploy the whole code. To reduce these complexities, most organizations are moving towards Microservices development and Docker for easy deployment and smooth service running.

This article on microservices is focused on what “Microservices” are and their advantages over monolithic services architecture. A Step by Step procedure to develop Microservices using .Net Core 2.2 framework with C# and Docker. Use Visual Studio 2019 Preview as the IDE.

Agenda to cover this article:

What Are the Lists of Software Required for Windows?

Why Should We Use Microservices Instead of a Monolithic Approach?

Why Should We Use .Net Core?

Why Should We Use Docker?

How to Create Microservices Using .Net Core 2.2 With C# and Then Build and Run It Using Docker?
To start with the creation of micro-service we have implemented the Repository Design Pattern. You can go for both Multiple Repositories pattern and then capsule it in a Unit of Work pattern, just to avoid the complexity of code standards.

Data access logic is in a separate class, or sets of classes called a repository, with the responsibility of persisting the application’s business model. 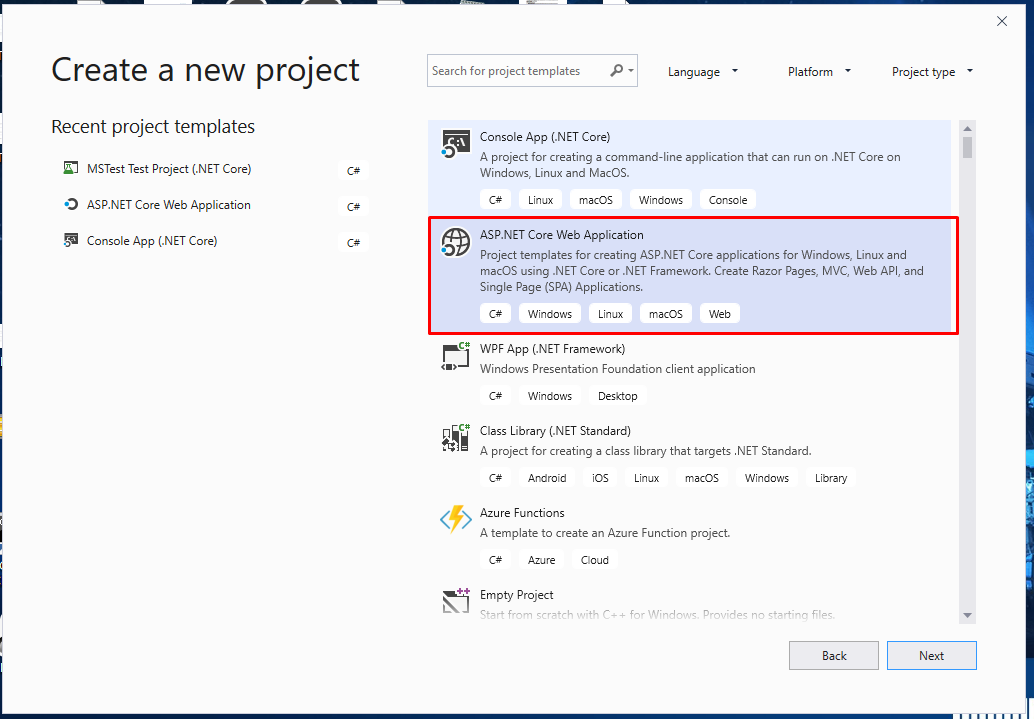 Select the “API” option and in the Advance section select “Enable Docker Support”, “Configure for HTTPS” with no Authentication which will create respective files and docker files into the project. 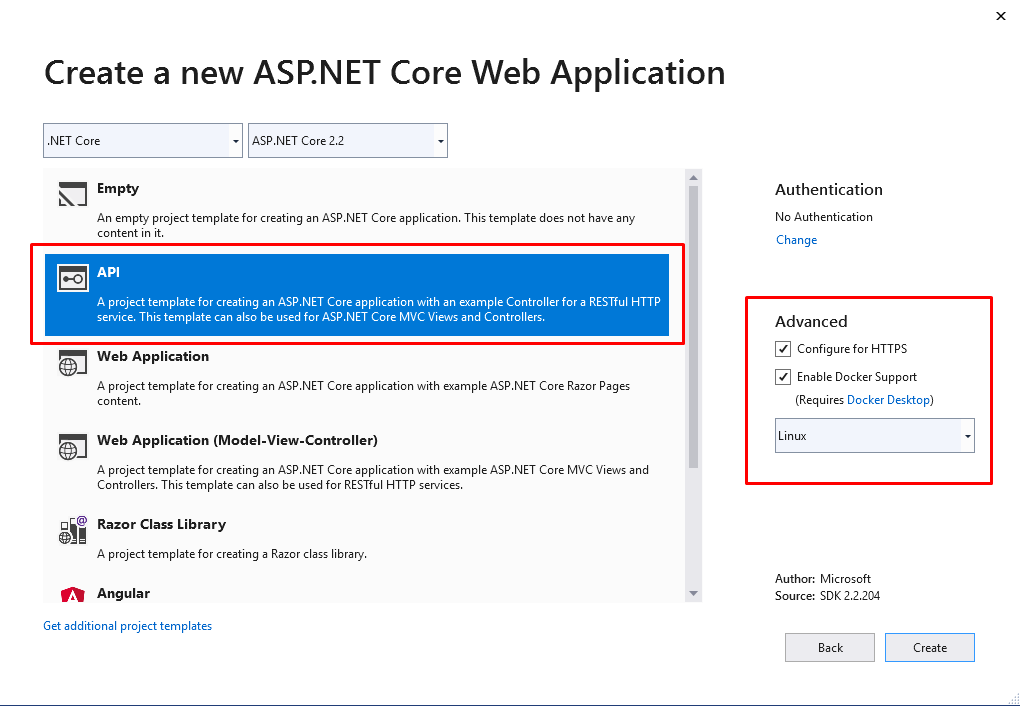 Why we selected API is because we have to create Restful HTTP service with Controllers example. This template helps to create micro-service in general.

No-Authentication by default, because we are going to create API services, so not required.

Enable Docker Support is to create Docker files, this Docker file will help to create images and then later containerize in the cloud. Currently, we have chosen LINUX as a targeted Docker OS.

Configure HTTPS is to expose the API service as HTTPS secured layer, TLS/SSL configuration required whenever we want to deploy in the actual PROD environment.

Respective folders will get created by the help of templates chosen, Then manually create new folders as “Models” and “Repository” for dbContext object as database connectivity. 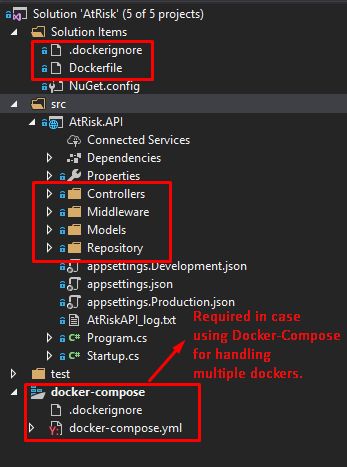 So, the above steps mentioned are the basic generic way of creating and start working on micro-services. On later steps we will concentrate on each folder and their significance of code-snippets. As an example, I will display one of my micro-service “At-Risk” and expose as an API service. Like-wise we have created several such API services and exposed them based on our business requirement.

Development is divided into the below sections:

Model classes represent the Tables and fields inside the database and will serve to map the data from the database. We have created the “Models” folder. Create a New class “AtRiskHistory” into Models folder and create properties that will map with Database table columns. 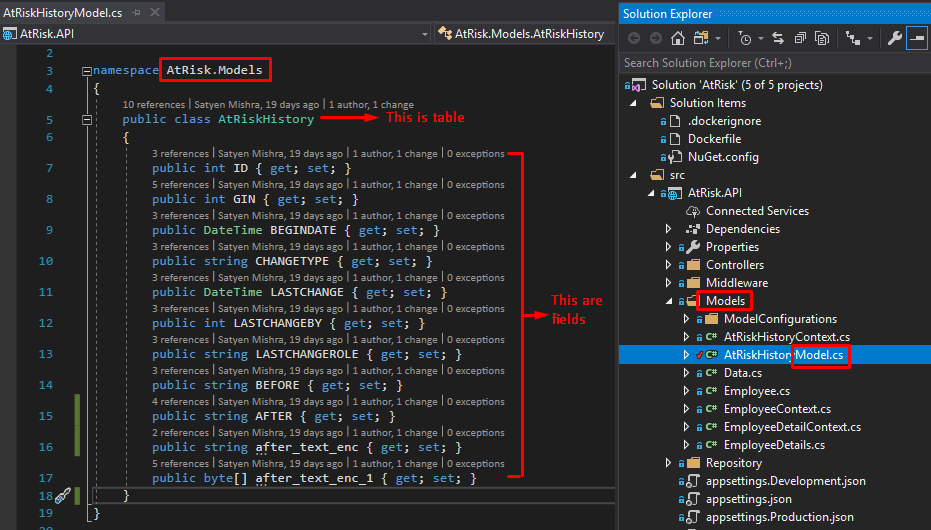 Context Class and the Database Connection

Now, let us create the context class, which will be a middleware component for the communication with the database. It has DbSet properties that contain the Table’s data from the database.

To enable communication between the .NET core and the PostgreSQL database, we need to install a third-party library. In the main project, install it either through the

Below is the output of packages installed viewed at .csproj file:

Open the appsettings.<Environment>.json file and add DB connection settings. Ideally, we should use the Environment Variable Configuration approach. This is easy to maintain and deploy. In this example when you are dealing with Development environment approach for appsettings.Development.json.

[We have skipped the Unit of Work DP]

Create the generic repository that will serve us all the CRUD operations with SaveCommitAll method (Ideally, the SaveCommitAll should be achieved by Unit of Work Design Pattern as a best practice).

Create a new Interface IAtRiskHistoryRepo and define a method GetAtRiskEmployeeDetailsAsync

Create a new class AtRiskHistoryRepo into the Repository folder which will implement IAtRiskHistoryRepoInterface. Then write business logic for GetAtRiskEmployeeDetailsAsync method.

Note: Repository works as a micro component of micro-service that encapsulates the data access layer and helps in data persistence and testability as well.

Open the StartUp.cs file and add the code i.e. to inject the service as like:

and few PostgreSQL configuration’s snippets inside the ConfigureService method so that the repository’s dependency is resolved at run time when needed and establish PostgreSQL DB Connection.

If you see, in StartUp class we have no were mentioned any sensitive data, everything is environment variable configuration based like used for DB connection. Always keep this best practice to not mention any sensitive or secrets in code solution when dealing with the PROD environment.

The Microservice should have an endpoint for which a controller is needed, which exposes the HTTP methods to the client as endpoints of the service methods. So, Implement the IRepository interface into the controller class.

Right-click on the Controllers folder and add a new Controller “history” to get the At-Risk history details. 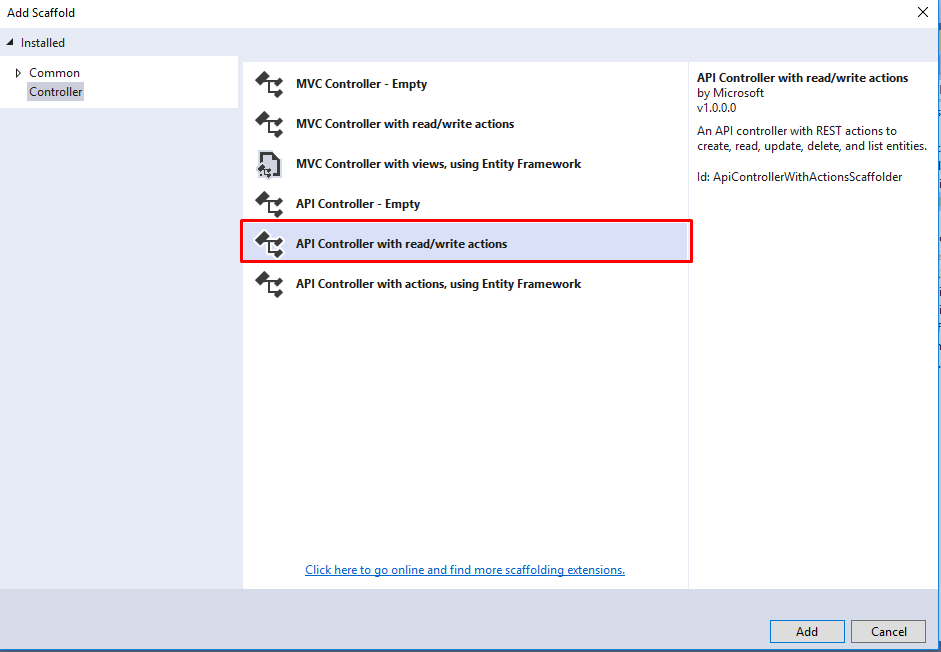 Add below code to call the GetAtRiskEmployeeDetailsAsync method. The basic implementation is shown here for the sake of understanding the concept. The methods could be attribute routed and could be decorated with more annotations as needed.

Note: We haven’t used the Entity Framework Core Migrations because this was a database-first approach.

Click on the launchSettings.json file for setting the service to get executed, next click F5. The service could be run via IIS Express. For example, Visual Studio default or via Docker container as well. Below are the default setup is shown, however, you can modify as per your requirements. 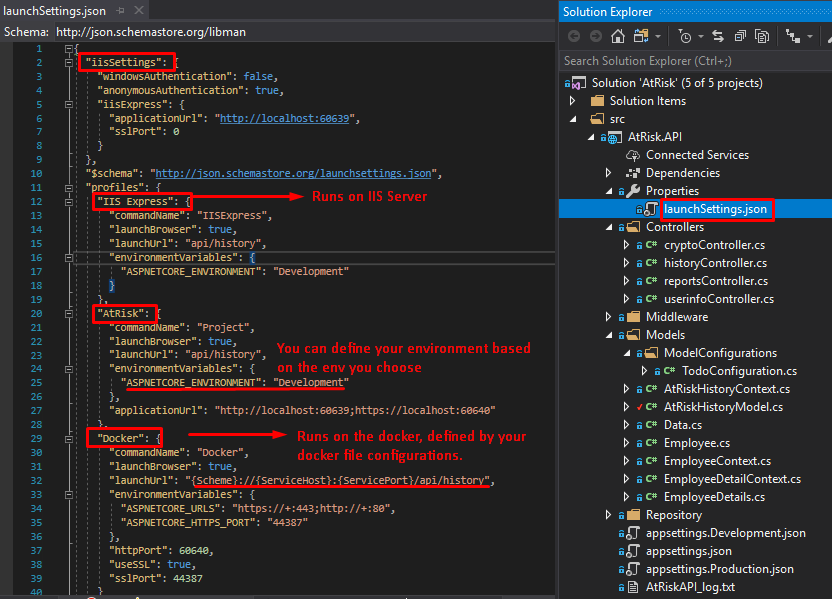 Sometime it might not show any data while running in a browser, it will be blank, but the service could be tested via any API testing client. Here Postman is used to testing the service endpoints. Keep it opened and the application running.

Through Postman, perform a GET request now and two records are shown as a JSON result response. 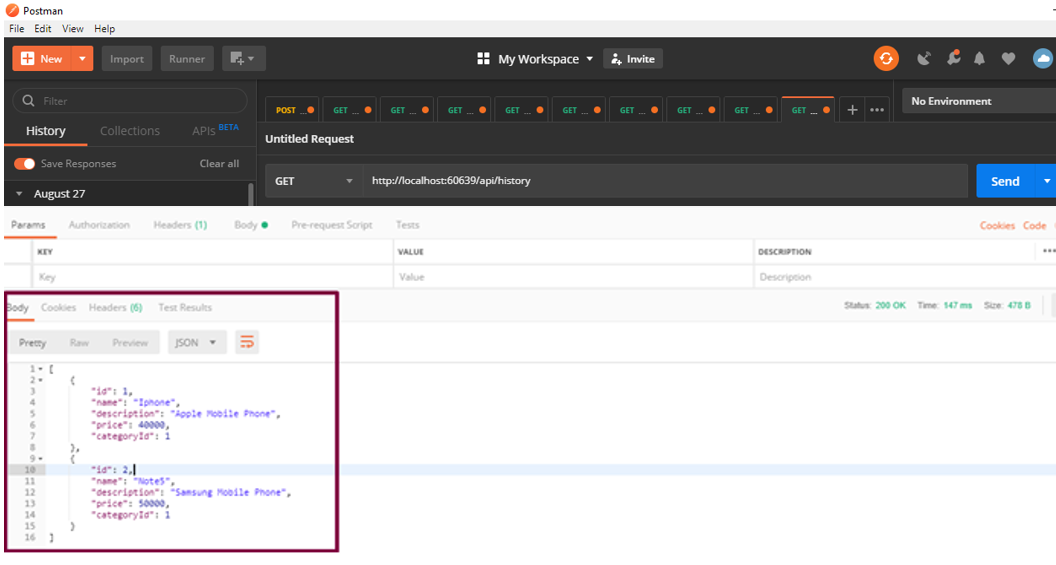 To create a Docker file, refer to the initial step two of this article which explains how to select Linux as Docker Target OS at the beginning of the project creation.

OR to create later, Right Click on the cs project > Add > Docker Support.

Note: The idea behind the article is to have a simple approach to Dockers, and just deploy and execute the service through Docker Container. I would suggest to separately deep dive more in Docker, Containers and Docker-Compose through their official sites.

If we select Docker Support to create Docker files the next screen would display Target OS:

If we select Container Orchestrator Support to create Docker-Compose File then the next screen would be:

For this example, we will skip Docker-Compose and only create a Docker file to run and deploy the services. Once the Docker file is created the same will get appended in .csproj file as below:

DockerFileContext defines the relative path of the docker file placed.

How to Build, Tag and Run the Microservices Using Docker Container Under Multiple Environments?

Open the command prompt in admin mode and navigate to the same folder where the project files are.

In case you want to test the containers in the localhost then run the Docker commands.

The same commands will be used while running for a PROD environment with slight tweaks.

docker images >> To checklist of images

docker run -d -p 60639:80 api:latest — environment="Development">> Run and containerize the image with port numbers under multiple environments. -d is daemon mode (runs on the background), and -it is the interactive mode (we can debug and check logs).

docker ps a >> To checklist of running containers.

Either we can run the Docker containers using the above commands or we can execute through Visual Studio.

Run the application with Docker as an option shown below:

Using the container port, now we can invoke the API service in the same way we approached for IIS Server.

Microservice is a service built around a specific business capability, which can be independently deployed and is called bounded context. This article on Microservices is focused on what Microservices are and their advantages over monolithic services architecture. The article describes a simple step by step on how to develop a Microservice using ASP.NET Core and run it via IIS and Docker container. Likewise, the service can have multiple images and can be run on multiple containers at the same point of time and deploy to multiple environments.

This is just a simple article about creating micro-services using .Net Core. If you have any questions about articles or content, please comment down to make it better. Your comment matters to improve and share knowledge.

Thanks and Happy Knowledge sharing !!