Microservices have been gaining ground in software development since the term came into existence. Microservices, aka microservice architecture, is a variant of service-oriented architecture (SOA) for developing large applications where services are grained into chunks as per business domains. It enables the continuous delivery/deployment of complex applications and makes the application easier to understand, develop, and test, and is more resilient to architecture erosion. The microservice architecture provides a new way to weave existing systems in novel ways in order to deliver software solutions quickly. It's one of the hottest topics in the software industry due to its ability to provide modularity, scalability, availability; many enterprise software development companies are keen to adopt it.

What Exactly Are Microservices?

Everything About Monolithic Software

Wikipedia says, “A monolithic application describes a single-tiered software application in which the user interface and data access code are combined into a single program from a single platform.” 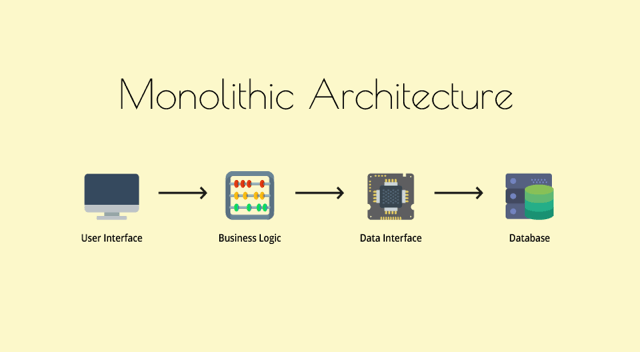 The web application client sends a request, the tier executes the business logic, the database stores the application specific data, and the UI displays the specific data to the user. But, as they share the same code base, several problems are likely to occur.

This type of architecture worked well for some time, but due to the increasing need for continuous delivery, there are multiple issues with this model.

Developing software without a good architecture can incur much of the cost to the organization. For instance: if a software development company developed a software by following a non-modular approach where UI functionalities and business functionalities are mixed in the same sourced files, the company may need to invest much to support their application in the latest smart-phone native apps. This badly affects software maintainability and increase the time-to-market which ultimately affects the sales of the company.

Monolithic architectures have been the traditional approach, but limitations with scaling, difficulties in maintaining a large codebase, high-risk upgrades, and large upfront setup costs have compelled enterprises or Software Development Company to explore different approaches. Monolithic applications are a tough nut to crack and are difficult to understand and scale with time.

So, to avoid such problems, Microservice Architecture can be a savior! It provides the 360-degree twist to solve the above-mentioned complexities; helping software development companies to stand tall amongst competitors.

Introduction to the Microservice Architecture 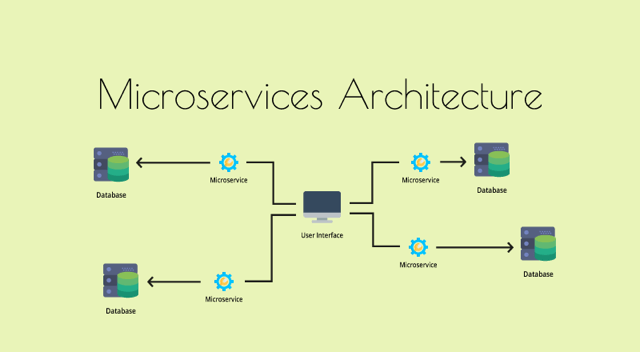 Microservice arhitecture is the software development technique which structures an application as a collection of loosely-coupled service. Each service is self-contained and should implement a single business capability. Microservice architecture is designed to overcome the challenges, failure, and breakdown of larger applications. Microservices provide opportunities to add resiliency to the system so that components can handle spikes and errors gracefully. With this, every stakeholder can focus solely on one particular element of an overall application, with their own programming style without concerns about other components. The communication in microservices can be carried out effortlessly because they are stateless and in the well-defined interface (request and response are independent).

If applications/software are developed using microservices methodologies, it will help to adopt DevOps approaches and would eliminate the deployment inefficiencies which would result in less time-to-market. As microservices are device-and platform-agnostic, it enables to develop the applications that provide enhanced user-experience across most of the platforms including web, mobile, IoT, tablets, wearables and many more.

For instance, Walmart Canada used monolithic architecture before 2012! The company faced glitches in handling 6 million page views/minutes which consumed more time and resulted in fewer sales. Due to such issues, they refactored their software architecture to microservices and found the instant result and high conversion rate overnight. Downtime was minimized and the company was able to use cheaper x86 servers rather than expensive hardware commodity which resulted in cost savings between 20%-50%.

It is the natural evolution of SOA in which various technology stacks bring technology diversity into the development team. Both SOA and Microservices allow complex workload to be broken down into smaller, more manageable and independent pieces.

However, there are some basic differences between both of them.

The philosophy of microservice is similar to the Unix philosophy, “Do one thing and do it well." Its characteristics are described below:

Why Should Software Development Companies Invest in Microservice Architecture?

In microservice architecture, developers are aware of exactly on where to look for the issues to get solved. If a single module is affected, it can be easily demolished or resolved without other parts of an applications getting affected; increasing application’s availability. This is exactly contradictory in the monolithic application; failure of a single component can pull down entire application. For instance, mobile gaming applications (built on monolithic architecture) which have different components like payment, login, player, history, and others. If a particular component, starts to consume more memory space, the entire application will be affected which would result in a poor user experience.

Easy to Modify the Technology Stack

With microservices, a software development company can try new stack or the latest technologies on the specific components to increase usability and avail larger benefits at the application level. As there are no dependency issues, software developers can avoid using particular technology stacks if they are not providing consistent user-experience. With such continuous modernization, your system won’t become easily outdated.

Provides scalability
Microservices scale the parts that have performance issues and use the hardware that best matches service requirements. As each service is the separate component, scaling can be deployed using more containers, enabling more effective capacity planning, less licensing cost and appropriate hardware. Components of the critical service can be deployed on the multiple servers for the increased availability and performance without impacting the performance of the other service. This scalability results in better customer-experience and increases cost-savings.

Aligned With the Organization

If an organization is using microservice, team size can be defined to match with the required tasks. Moreover, teams can be broken down into smaller groups and can focus on single components of the application. As the end goal is customer satisfaction and great user experience, the team is not divided into UI team, database team and so on. For instance, if a team working in UAE is handling three services while the team working in California is handling five services, each team working in California and UAE can release and deploy different functionalities independently. These cross-functional teams work towards the fulfillment of one single functionality breaking down the silos between team fostering better collaboration.

With microservices, productivity and speed can be easily tackled. The different team works on different components simultaneously without having to wait for one team to finish the task. This results in speeding up the quality assurance as each micro-service can be tested individually. Other stakeholders can work on enhancing the components that are already developed, while other programmers are working on other ones. This increases the speed and leads to the faster release of the product.

Hurdles to Be Considered

Just because, everything looks flowery, it doesn’t mean it is perfect for the software industry; it does have potential pains which also need to be addressed:-

With the continuous delivery and rapid development, employees must pace up with the agility and speed requires availing the benefits from micro-services. If they take a long span of time to provision a server, the company can be in a serious trouble.

Differences Between Monolithic and Microservice Architecture 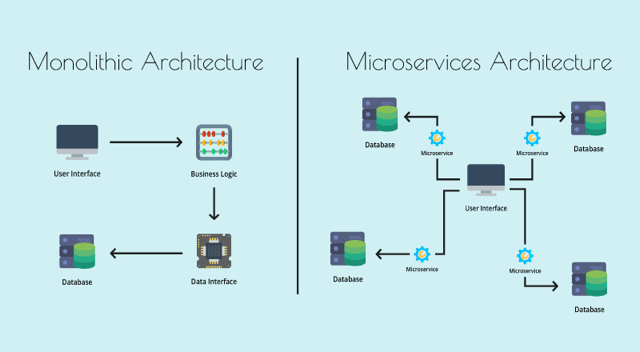 The Future of Microservice Architecture

You might have got the clear scenario about Microservice architecture and the potentiality it possesses to change the software industry! With the increasing use of the digital technologies and multiple device support; software development is diving down into the complex process. But the software industry is blessed with the Microservice architecture which can serve as the perfect solution to solve complexities for software development companies. If companies think to adopt it, it would surely affect the culture technically and operationally.

Big Giants Are Already Using It

Today, with the rise in the micro-service, most of the organizations are pulling down monolithic architecture and adopting modern one to leverage in the cut-throat competition. Some of them include Netflix, eBay, Amazon, Twitter, PayPal, Walmart and many more…

NetFlix is one of the earliest adopters to use Microservices in SOA architecture. The time when the company was growing at a fast pace, was unable to build data centers to provide scalability. Minor problems in the development required software developers to look for the issues again and again. But, when they refactored the existing architecture with the micro-services, they were able to handle a billion calls each day through APIs from 800 different devices. Today, Netflix is using 500+ micro-services and 30+ engineering team.

Uber started its journey with monolithic architecture built for the single offering in a single city. As it was operated in only one city, one codebase option seemed to be the clean option and solve all the business problems. But, when it rapidly expanded to other cities, components became tightly coupled, encapsulation was other concern and continuous integration turned out to be a liability. So, to solve all these complexities, the engineering team refactored the existing application and made use of Microservices. They introduced

Thus, Uber benefited a lot from shifting from monolithic to microservice architecture.

Amazon being one of the big giant e-commerce stores followed the monolithic application which kept the developers apart from each other and separated team from the ultimate goal. The company had to resolve conflicts between the reconciling process, merging them into a single version and producing a master version of all. Whole new code-base, test-cases need to be re-run to make sure that there have been no rushes. These glitches made company to use Microservice architecture! This software solution communicated with the world through their own web service APIs. Hence, it was highly successful.

Whether you select whether a monolith or microservices, both have them have advantages and disadvantages. In the end, selecting software architecture depends on your project requirements, the size of the project and much more. If you wish to build small-scale software, monolithic can be an option and if you prefer developing complex software, microservice architecture is definitely a sure shot.