The BlazeMeter blog contains a number of articles dedicated to load testing HLS services. Since HLS is based on the HTTP protocol, using JMeter's HTTP sampler to implement a load testing script for HLS service is a straightforward approach.

Here is a brief description of this implementation: the first HTTP sampler gets a playlist that contains URLs of media chunks, which constitute an original media file. Each chunk is downloaded using other HTTP samplers that iterate over the list.

Another, more simple approach is to use the HLS sampler, an Apache JMeter™ component that simplifies the script logic of processing playlists. The HLS sampler does all the work of receiving playlists and downloading media chunks. This is helpful in more complex cases where there is a master playlist that contains the information about variant playlists that describe different sets of media chunks, each representing original media files with various resolutions, bitrates, and qualities. The HLS sampler processes these cases, imitating the client behavior for different video types, network bitrates, and client resolutions.

Both approaches have their advantages. Because the primary goal of load testing is to get reports about the performance of the system under the test, JMeter listeners can be used to display various performance related metrics. This blog post highlights the advantages and disadvantages of each approach, including usage of aggregate JMeter listeners.

This blog post explains how to calculate these metrics in both approaches of JMeter script implementation. 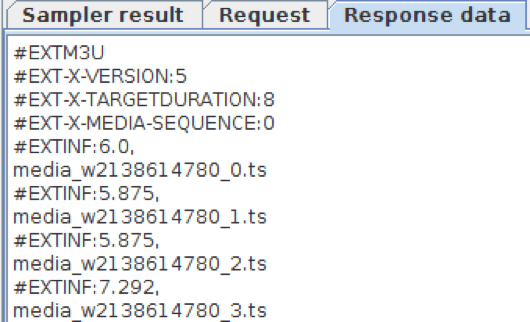 You can see that each string related to the chunk URL has an #EXT-INF tag with the duration value. The other useful parameters that can be parsed from the master playlist are bandwidth and resolution. The screenshot of the master playlist is shown below.

In the screenshot above, you can see that the #EXT-X-STREAM-INF tag defines bandwidth and resolution parameters for the variant playlist shown below. Using these values, it's possible to evaluate the UX metrics enlisted above. The JMeter script that calculates these metrics can be downloaded from here.

The provided script is not a universal solution, because for different types of streams and configurations of playlists, different processing may be required. But, this script can give you an idea about how these metrics can be evaluated. This script processes an open source HLS stream. It doesn't use the HLS sampler. Instead, it uses HTTP requests to get playlists and to receive media chunks. JSR223 post processors for HTTP requests monitor the time required for downloading each media chunk and evaluate user experience metrics.

Now, let's elaborate more on how each metric listed above is evaluated. All metrics are calculated separately for each thread and are stored in corresponding variables. All metrics are declared in the user-defined component demonstrated in the screenshots below.

The calculation of the buffer fill time, lag time, download time and playback time is done in the JSR223 postprocessor, and its Groovy script is shown on the screenshot below, as well as in code further down in this blog post. 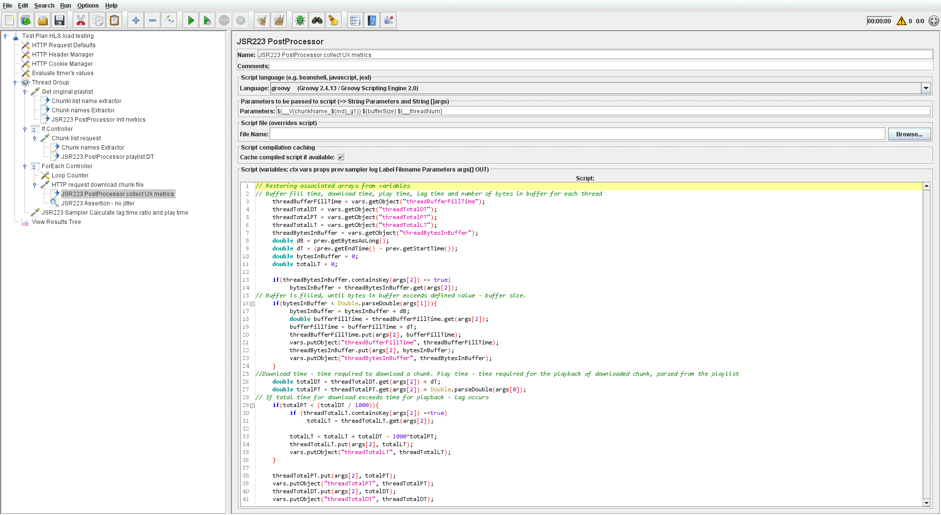 The Buffer fill time metric is the time required to download one or a few chunks before the HLS player starts to playback the media. Usually, the client sees the progress roller during this time. In the JMeter script, which imitates an HLS player, the buffer size is defined in kilobytes, as the user-defined variable ${bufferSize}.

The time required to fill the buffer is equal to the time it takes to download playlists and media chunks so that the amount of downloaded bytes of chunks equals or exceeds the buffer size.

The piece of code from the JSR223 postprocessor above shows the calculation of the buffer fill time variable.

Lag time is calculated by using the duration value that is specified for each media chunk in the variant playlist. The duration value is the time required for the playback of the downloaded chunk. This value is parsed from the variant playlist and passed as a parameter to the JSR223 postprocessor. The lag is calculated after each chunk is downloaded. If the total time spent on the download of media chunks exceeds the time required for the playback of the downloaded chunks, the lag occurs. In other words, lag time is calculated in the script as the difference between play time and download time variables. The total lag time is accumulated in the corresponding variable.

The piece of Groovy code from the JSR223 postprocessor that shows the calculation of the lag time is shown below. 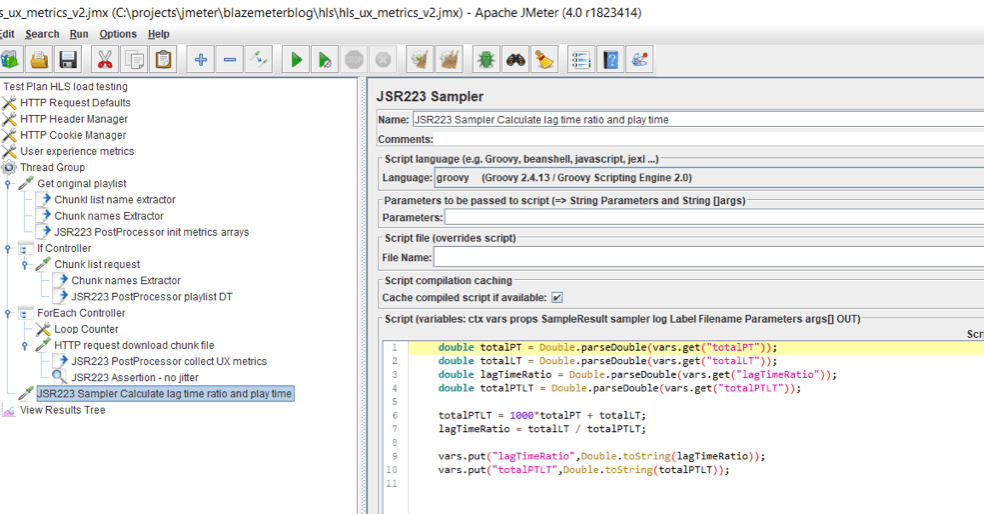 In the JSR223 post processor, the download time is accumulated in the corresponding variable every time a new chunk is downloaded. The time required for downloading is taken from the response.

The piece of the JSR223 postprocessor Groovy code that calculates download time and play time is shown below.

The same algorithm for calculating user experience metrics can be used when implementing the HLS sampler approach in the JMeter script, which you can find here. As mentioned, scripting is simpler with the HLS sampler because one HLS sampler can do the whole job of retrieving HLS playlists, parsing them and downloading all the chunks from the playlist. The HLS sampler can also be adapted to various network throughput and end client behavior. 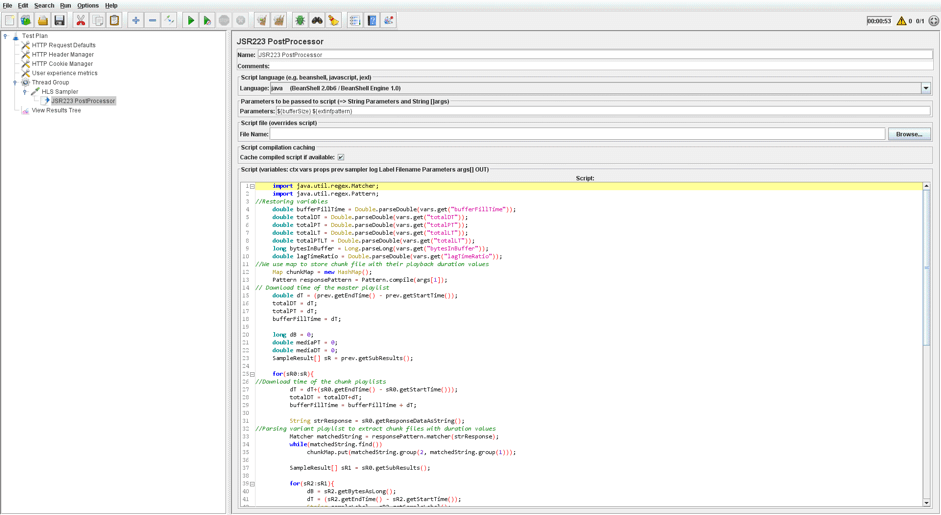 The algorithm of the calculation of the UX metrics is the same as in the first approach of the JMeter script design. The JSR223 postprocessor Java code is below.

Let's recap: this article demonstrated the evaluation of user experience metrics in two approaches for creating JMeter scripts creation for HLS testing. The demonstrated method provides one of the solutions to calculate these metrics and use them further in the script, but there are more methods. For example, different components like the Java sampler can be used to build a JMeter script that imitates a client. Commercial plugins like Ubik can also be used to build a JMeter script. In all these cases, we recommend you calculate metrics to evaluate user experience during the load testing of HLS services.