Module extractions with many tens or hundreds of violations to resolve will benefit from preparatory planning and estimation.

In the example levelized structure diagram below, three packages have cyclic dependencies.

Attempts to move code responsible for remote communication into a new comms module resolves the feedback dependency from seaview to assemblies. But another is created from assemblies to comms which prevents the creation of the new module (the dotted arrow). 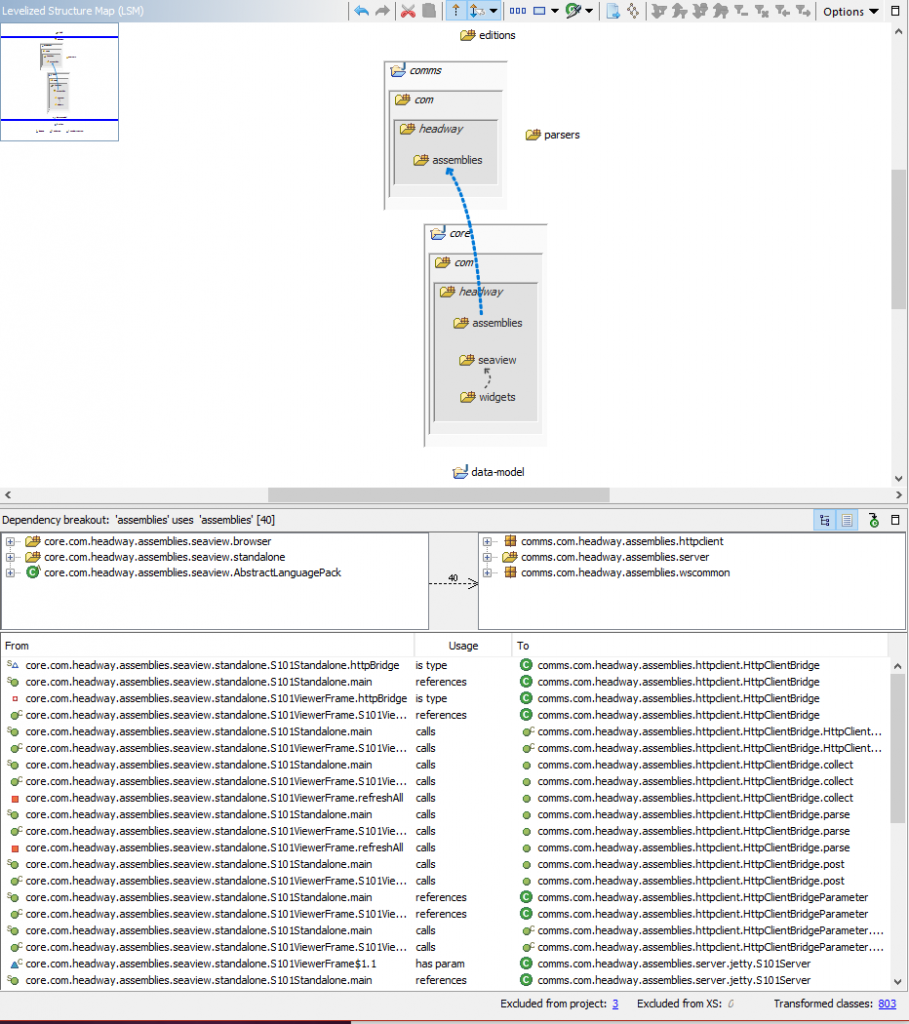 It might be tempting to bulk import a story per dependency into an agile planning tool, but careful grouping of the violations will yield fewer stories and a shorter time to deliver them. The number and nature of the stories is driven by the type of the dependencies and how they are to be fixed and tested, and by whom:

The detailed dependency list can be imported into a spreadsheet. Use this raw list as input to the backlog creation. Ordering by the "from" or "to" columns helps to identify dependencies that can be grouped together into a single story.

Structural refactoring should have no effect on application functionality. The only way to test the changes is through regression testing. If the application does not have an automated regression suite the cost of manual testing can far exceed the cost of changing the code. The worst case scenario is one in which the velocity of the team is determined not by the code changes but by the manual regression testing effort.

As an example, consider the situation where a method in an implementation class is being called directly. The method isn’t suitable for inclusion in the interface because it exposes the module’s internal model in the return type. A new method with a suitable new class for the return type must be implemented which delegates to the existing method and converts the internal model to the new return type. The first violation probably appeared when a developer under pressure to deliver a change in functionality took the shortcut of referencing the implementation class, rather than implementing the delegating method. Once it exists, other calls to the method can appear across the code base. Another developer under pressure takes the same shortcut or worse,  blindly copies the call to the implementation class.

One option is to group all of these calls together in a single story. When playing the story the developer will implement the missing delegating method and then refactor all the offending code to use the interface and its new method. But if the calls are spread across the code base this one story could affect many different areas of functionality. Without an automated test suite, such a change would result in a significant manual testing effort.

So another option is to group violations into stories for each functional area. A story to implement the delegating method must be played first. When sprints are planned, the stories affecting the same functional area are played together such that many changes can be regression tested together.

Whichever way the work is partitioned up and assigned to developers, each story should be a discrete piece of work that can be completed and deployed independently. This allows the stories to be played at a pace to suit the team(s) involved. Should priorities change the refactoring can be halted without losing any stories already played.