Other language drivers that support MongoDB 4.0 also encapsulate transaction-related APIs. To do this, users need to create a Session, then open and commit the transaction on the Session. For example:

Session is a concept introduced in MongoDB 3.6. This feature is mainly used to achieve multi-document transactions. Session is essentially a "context."

Each Session contains a unique identifier lsid. In version 4.0, each request of the user can specify additional extension fields, including:

It is worth mentioning that the lsid of the Session can be allocated by the server by calling startSession command, or by the client, so that the network overhead is saved. For the transaction identifier, MongoDB does not provide a separate startTransaction command, txnNumber is directly assigned by the Driver. The Driver only needs to guarantee that within a Session, txnNumber is incremented. When the server receives a new transaction request, it will start a new transaction actively.

When MongoDB startSession, it can specify a series of options to control the access behavior of the Session, including:

Atomicity, Consistency, Isolation, and Durability (ACID) is a set of properties for database transactions aimed at ensuring the validity of transactions under all circumstances. ACID plays an essential role for multi-document transactions.

Consistency is straightforward. Only permissible transactions are allowed on the database, which prevents database corruption by an illegal transaction.

In the replica set configuration, an oplog (a normal document, so the modification of the transaction in the current version cannot exceed the document size limit of 16 MB) will be recorded when the entire MongoDB transaction is committed, including all the operations in the transaction. The slave node pulls the oplog and replays the transaction operations locally.

The entire replay process is as follows:

WiredTiger has supported transactions for a long time. In versions 3.x, MongoDB uses WiredTiger transactions to guarantee the modification atomicity of data, index, and oplog. But in fact, MongoDB provides a transaction API after iterations of multiple versions. The core difficulty is timing.

To solve this problem, WiredTier 3.0 introduces a transaction timestamp mechanism. The application can explicitly assign a commit timestamp to the WiredTiger transaction through the WT_SESSION::timestamp_transaction API, and then achieve the specified timestamp read (read "as of" a timestamp). With the read "as of" a timestamp feature, when the oplog is replayed, the read on the slave node will no longer conflict with the replayed oplog, and the read request will not be blocked by replaying the oplog. This is a significant improvement in the version 4.0.

Impact of Transaction on the Cache

The WiredTiger (WT) transaction opens a snapshot, and the presence of snapshot impacts the WiredTiger cache evict. On a WT page, there are N modification versions. If these modifications are not globally visible (__wt_txn_visible_all), this page cannot be evicted (__wt_page_can_evict).

In order to minimize the WT cache pressure, the MongoDB 4.0 transaction function has some restrictions, but when the transaction resource exceeds a certain threshold, it will automatically abort to release the resource. The rules include:

Read as of a Timestamp and Oldest Timestamp

Read as of a timestamp relies on WiredTiger to maintain multiple versions in memory. Each version is associated with a timestamp. As long as the MongoDB layer may need to read the version, the engine layer must maintain the resources of this version. If there are too many reserved versions, it puts a lot of pressure on the WT cache.

The version 4.0 implements the rollback mechanism for the storage engine layer. When the replica set node needs to be rolled back, it directly calls the WiredTiger API to roll back the data to a stable version (a checkpoint). This stable version depends on stable timestamp. WiredTiger will ensure that data after the stable timestamp is not written to the checkpoint. According to the synchronization state of the replica set, MongoDB will update the stable timestamp when the data has been synchronized to most nodes (majority committed). Since the data has been committed to most nodes, no rollback will occur, and the data before this timestamp can be written to the checkpoint.

MongoDB needs to ensure frequent updates to stable timestamp (in a timely manner), otherwise, WT checkpoint behaviors will be impacted, resulting in a lot of memory not being released. 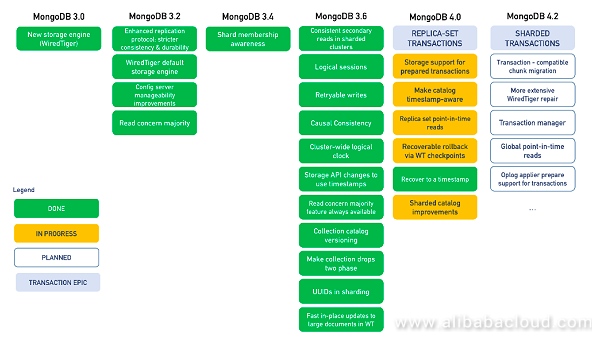