For one of my clients I have a Eureka-based microservices horizontally scaled architecture. As an entry point of the project, I was first using Zuul, and later on, I replaced it with Spring Cloud Gateway. The simplified architecture of the project looks like this:

Both Zuul and Spring Cloud Gateway have integrated flawlessly with Eureka service discovery. However, the whole project was hosted on AWS EC2. In AWS EC2, you are paying for resources/Virtual Machines that you are using. It is better if you use smaller Virtual Machine Instances because the price will be lower.

The memory consumption of it was increasing slowly in time and eventually ended with Out of Memory Error (EOM). I have built a very resilient system, which can restore back the fallen Spring Cloud Gateway. However, the cost of this operation was a few minutes of downtime for two weeks.

Maybe the problem was with me, and I was unable to make a proper resolution of the EOM errors. However, instead of digging deeper into the memory leak problem, I decided to take an alternative approach, which if I was right, should have additionally helped me to resolve the ‘4x’ problem (four times bigger instances for Spring Cloud Gateway).

Using NGINX instead of Spring Cloud Gateway sounds wonderful. However, there was one "insignificant" problem there: NGINX wasn’t made to work with Eureka service discovery.

This looked like a deal-breaker for me, so using the NGINX instead of Spring Cloud Gateway, was something that seemed great, but not possible for the moment.

It took me a while to figure out the solution of how to use NGINX together with Eureka service discovery.

The solution started to get shape after I heard about the NGINX Hot Reload feature. According to the NGINX Documentation:

Now, the simplified project infrastructure should look this way: 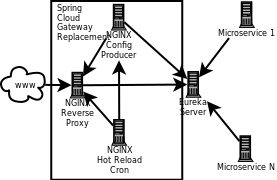 Here is the explanation of the scheme above:

It is that simple!

This was pretty much the story about the "Spring Cloud Gateway Replacement". If you are curious about the implementation(s) you can continue reading about the details :)

I’ve created a few sample projects in order to show how the system really works. The projects are:

The implementation of the sample projects is slightly different than the real implementation used in production environment. It is simplified in order to show the main idea how to use the  NGINX with the Eureka service discovery.

Here is the GitHub implementation of the producer.

In order to implement the NGINX Config Producer you need a few things:

So, I decided to use my Simple Netflix Eureka client using Quarkus, which I have developed earlier during Spring Boot to Quarkus Migration for one of my microservices. The client only has two features: registerApp and getNextServer, but it turns out that they are enough for me.

What I’ve earned here as an additional benefit is that using Quarkus Framework instead of Spring Boot results in an incredibly small application footprint (less than 16Mb of memory).

You just need an NGINX configuration file with a few placeholders to replace. The placeholders are for NGINX ports and to replace upstream servers extracted from the Eureka service discovery.

The default.conf file can be found here. Let me explain some parts of the file.

Here, all the microservice servers retrieved from the Eureka client should be stored. This is how it should look like:

Imagine the case when all microservices are down. In that case, the "upstream demo" will be empty. If it is NGINX, it will refuse to reload the configuration. In order to prevent putting zero microservice servers, we shall add as an upstream server this server which will return the 502 (Bad Gateway) error.

We should ensure the case when some of the microservices are down and then NGINX should go to the next server. This is done by the snippet above.

In that way, we will disable some endpoints and ensure the health check for the NGINX server.

Pass All Requests to the "Demo" Microservice

Nothing special here. If you have more than one microservice you have to put more blocks like this one.

The common logic of the “NGINX configuration producer” is extracted here, in a dedicated project for common/useful Quarkus libraries.

Then, you just have to fill the microservices related parts:

The NginxService source can be found here.

Playing and Testing With the Sample

In order to play with samples, you will need Docker installed. I am working on a Linux environment. That’s why some of the services and tests are started through bash.

The Eureka is set with enableSelfPreservation=false. The Eureka dashboard is available on http://localhost:24455/.

You can start the service through the following script: docker_run.sh from the NGINX Config Producer project.

You can start the script in the following way:

Note that the localhost or 127.0.0.1 will not work because the process will be running inside the container.

You can check if the service is available through Eureka dashboard (http://localhost:24455/)

Also, you can check the generation of the NGINX configuration file on this URL: http://localhost:24456/nginx/config.

You can do that through the docker_run_nginx.sh from the NGINX Config Producer project. This is the script. There isn't any additional configuration there.

The script will also download the NGINX configuration and will hot-reload it every 30 seconds.

You can try to hit the demo microservice through the NGINX: http://localhost:24457/rest

As expected the NGINX will respond with 502 error, because we haven’t started any microservice yet.

It can be started from the docker_run.sh from the Demo Microservice Project.

You have to start a new terminal because the last one is already taken by the NGINX start and reload script. You can start the script in the following way:

This will start three demo microservices on ports 24463, 24464, and 24465. You should wait a while in order the configuration to be reloaded in NGINX and you can try again to hit the demo microservice: http://localhost:24457/rest.

You should have the following result in your terminal:

Let's have some fun with the demo system. You can use the curl_tests.sh from the NGINX Config Producer project:

As you can see, it will hit the NGINX 15 times. Here is the result on my end:

The "otaibe-nginx-with-eureka-demo-microservice-24464" microservice has gone. Right?

Wait for a while, and the result is:

All five demo microservices are shown now :). Seems that everything works as expected. Correct?

Just stop all the containers:

You can verify that there are no containers left:

The only thing left is to stop the docker_run_nginx.sh from the NGINX Config Producer. Go to the terminal where it is running and press the Ctrl+C.

In my opinion, using the NGINX Hot Reload feature combined with a service that can dynamically build the up to date NGINX configuration and then reload it, is a very powerful combination.  In that way, NGINX can be involved with any kind of service discovery, and you will have a great, fast, and flexible API Gateway, with the smallest footprint possible.