Creating accurate machine learning models that are capable of identifying and localizing multiple objects in a single image has remained a core challenge in computer vision. But with recent advancements in deep learning, object detection applications are easier to develop than ever before. TensorFlow’s object detection API is an open-source framework built on top of TensorFlow that makes it easy to construct, train, and deploy object detection models.

You can go through this real-time object detection video lecture where our deep learning training expert discusses how to detect an object in real time using TensorFlow.

What Is Object Detection?

Object Detection is the process of finding real-world object instances like cars, bikes, TVs, flowers, and humans in still images or videos. It allows for the recognition, localization, and detection of multiple objects within an image, which provides us with a much better understanding of an image as a whole. It is commonly used in applications such as image retrieval, security, surveillance, and advanced driver assistance systems (ADAS).

Object detection can be done in multiple ways: 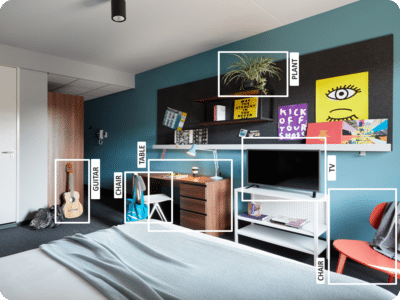 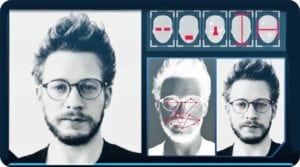 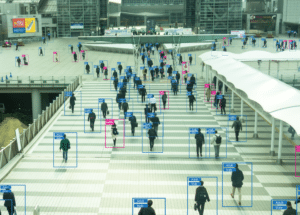 Object detection can also be used for people counting. It is used for analyzing store performance or crowd statistics during festivals. These tend to be more difficult as people move out of the frame quickly.

It is a very important application, as during crowd gatherings, this feature can be used for multiple purposes. 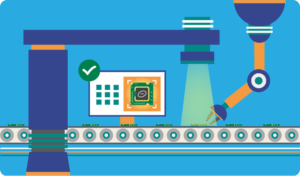 Inventory management can be very tricky, as items are hard to track in real time.Automatic object counting and localization allows for improving inventory accuracy. 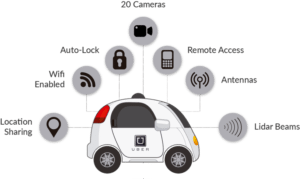 Self-driving cars are the future; there’s no doubt about that. But the working behind it is very tricky, as it combines a variety of techniques to perceive their surroundings, including radar, laser light, GPS, odometry, and computer vision.

Advanced control systems interpret sensory information to identify appropriate navigation paths as well as obstacles, and once the image sensor detects any sign of a living being in its path, it automatically stops. This happens at a very fast rate and is a big step towards driverless cars.

Object detection plays a very important role in Security. Be it face ID of Apple or the retina scan used in all the sci-fi movies.

It is also used by the government to access security feeds and match it with their existing database to find any criminals or to detect the robbers’ vehicle.

The applications are limitless.

Every object detection algorithm has a different way of working, but they all work on the same principle.

Feature Extraction: They extract features from the input images at hand and use these features to determine the class of the image. Be it through MatLab, Open CV, Viola Jones, or deep learning.

that you have understand the basic workflow of object detection, let’s move along to the tutorial and understand what Tensorflow is and what its components are.

Tensorflow is Google’s open source machine learning framework for dataflow programming across a range of tasks. Nodes in the graph represent mathematical operations, while the graph edges represent the multi-dimensional data arrays (tensors) communicated between them.

Tensors are just multidimensional arrays, an extension of 2-dimensional tables of data with a higher dimension. There are many features of Tensorflow that make it appropriate for deep learning. So, without further ado, let’s see how we can implement Object Detection using Tensorflow.

Before working on the demo, let’s have a look at the prerequisites:

Setting up the Environment

For all the other libraries, we can use pip or conda to install them. The code is provided below:

Next, we have Protobuf: Protocol Buffers (Protobuf) is Google’s language-neutral, platform-neutral, extensible mechanism for serializing structured data. Think of it as XML, but smaller, faster, and simpler. You need to Download Protobuf version 3.4 or above for this demo and extract it.

Now you need to clone or download TensorFlow’s Model from GitHub. Once downloaded and extracted, rename the "models-masters" to just "models."

For simplicity, we are going to keep “models” and “protobuf” under one folder named "Tensorflow."

Next, we need to go inside the Tensorflow folder and then inside the research folder and run protobuf from there using this command:

To check whether this worked or not, you can go to the protos folder inside models>object_detection>protos and there, you can see that for every proto file, there’s one python file created. 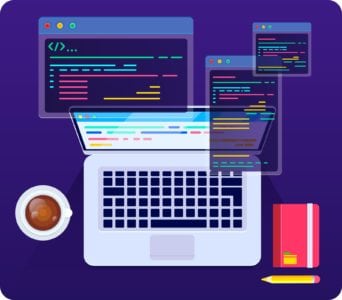 After the environment is set up, you need to go to the “object_detection” directory and create a new python file. You can use Spyder or Jupyter to write your code.

First of all, we need to import all the libraries.

Next, we will download the model, which is trained on the COCO dataset. COCO stands for Common Objects in Context, and this dataset contains around 330K labeled images. The model selection is important because you need to make a tradeoff between speed and accuracy. Depending on your requirement and the system memory, the correct model must be selected.

“models>research>object_detection>g3doc>detection_model_zoo” contains all the models with different speed and accuracy (mAP).

Next, we provide the required model and the frozen inference graph generated by Tensorflow.

This code will download that model from the internet and extract the frozen inference graph of that model.

Next, we are going to load all the labels

Now we will convert the images' data into a numPy array for processing.

The path to the images for the testing purpose is defined here. We have a naming convention “image[i]” for i in (1 to n+1), n being the number of images provided.

This code runs the inference for a single image where it detects the objects, make boxes, and provides the class and the class score of that particular object.

Our final loop, which will call all the functions defined above, will run the inference on all the input images one by one, which will provide us the output of images in which objects are detected with labels and the percentage/score of that object being similar to the training data. 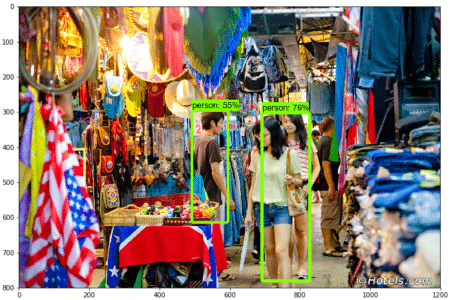 Now, let’s see how we can detect objects in a live video feed.

For this demo, we will use the same code, but we’ll tweak a few things. We are going to use OpenCV and the camera module to use the live feed of the webcam to detect objects.

Add the OpenCV library and the camera being used to capture images. Just add the following lines to the import library section.

We don’t need to load the images from the directory and convert it to numPy array, as OpenCV will take care of that for us.

We will not use matplotlib for final image show. Instead, we will use OpenCV for that as well. For that...

This code will use OpenCV that will, in turn, use the camera object initialized earlier to open a new window named “Object_Detection” of the size “800×600”. It will wait for 25 milliseconds for the camera to show images, otherwise, it will close the window.

Final Code With All the Changes:

I hope you all enjoyed this article and now understand the power of Tensorflow and how easy it is to detect objects in images and live video feed. So, if you have read this, you are no longer a newbie on object detection and TensorFlow. Try out these examples and let me know if you face any challenges while deploying the code.

Got Drones? You Need Object Detection

5 Free eBooks to Help You Learn Machine Learning in 2019