Lizza decides to get a new dress for her 18th birthday party. She goes online to her favourite website fashionworld.com and selects a perfect Red dress. But oops its out of stock.

She tries to find another dress but there is nothing that can replace it. So, she goes back to the dress, registers her email id and click on "Notify Me" button.

You must be wondering why am I telling you story of Red Dress? Reason is "Notify Me" button is an example of Observer Pattern.

Here is how "Notify Me" button works? As soon as the dress will be in stock she will be notified via an email.

Similarly, there could be other users waiting for the Red Dress. As shown below user1, user2 and user3 have registered for notification just like Lizza. So, they will be notified once dress is available.

User4 is not interested in Red Dress so, she never registered by clicking "Notify Me" button. No email will be sent to her when the dress is 'In Stock'

If user1 finds another dress and is no longer interested in the Red Dress. Then user1 can get the registration removed. In this case she will no longer be informed when dress is available. 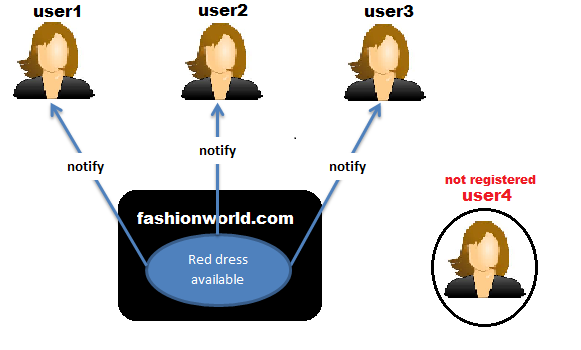 There is one Red dress but many users interested in it.

Observer Pattern defines one to many relationship between Observable and observers

When the state of dress changes from 'Out of stock' to 'in stock' all users are notified.

When Observable changes state all Observers are notified

User4 is not registered hence he is not an observer in this case.

If User1 gets her registration removed later. She will not remain an Observer in that case and will not be notified.

Observers subscribe for an Observable. Observers can unsubscribe at any time

Time to write Java code to implement this pattern-

What functionalities will be required in an Observable? 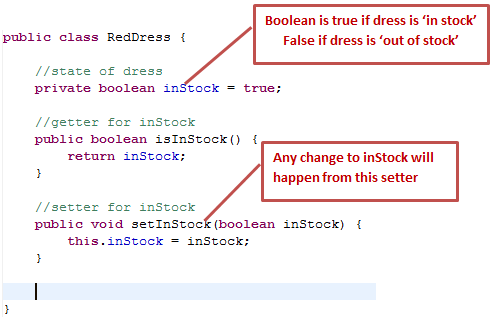 To become observable RedDress need to implement functionalities of Observable (point 1 below).

At any point of time RedDress will have the list of all the users who need to be notified.

notifyObserver() method has responsibility of informing all the observers about the change.(point 5 below)

Any change to inStock will happen from the setter setInStock(). Whenever, this happens all the users need to be notified simply by calling notifyObserver method (point 6 below) 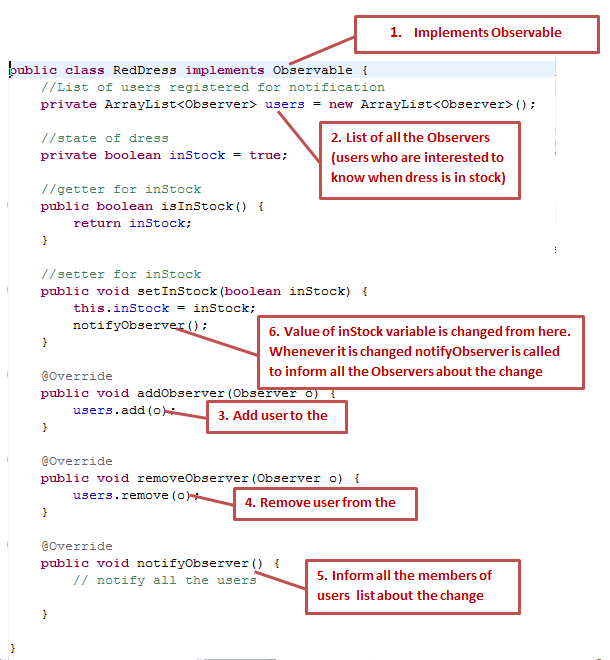 Observable need to update all the Observers. So, Observer should have a method update() which Observable can call to notify about the change.

If a user has to become an Observer it will implement Observer functionality (Point 1 below).

From update method User can do something when state of Observable is changed. In this casebuyDress() is called. (Point 2 below)

Once, user calls buyDress() he is not interested in any status change of RedDress. So, it calls unsubscribe() to get removed from the observer list of RedDress (Point 3 below). 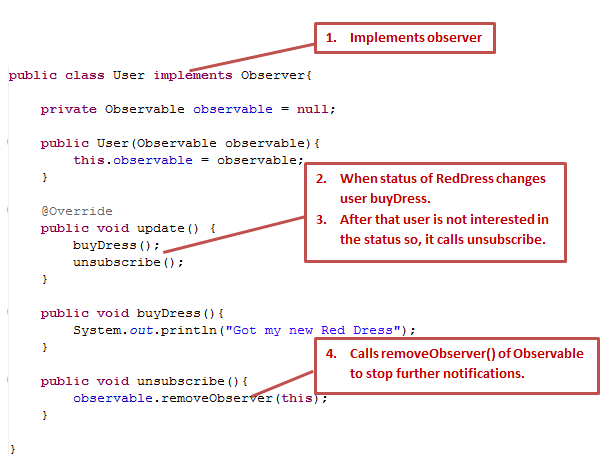 Similarly any new class can become an Observer by simply implementing Interface and it will not impact Observable.

Observer & Observable are loosely coupled. Change to one will not impact other

Based on this example lets create Class Diagram for above example- 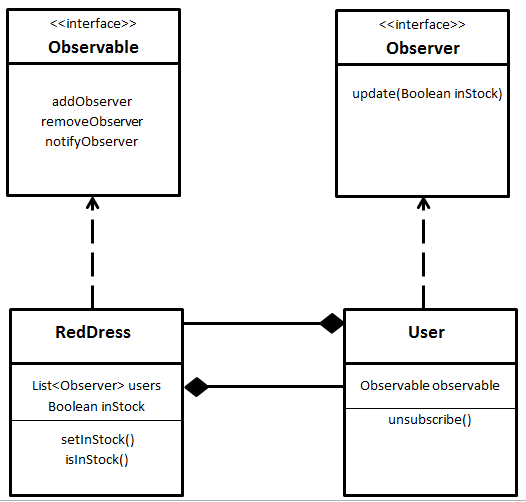 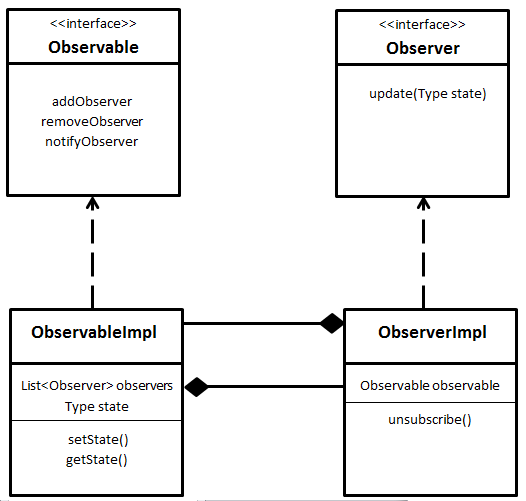