Like any modern database, Snowflake uses various levels of caching to maximize query performance and reduce disk I/O and machine load. This article provides an overview of the techniques used by Snowflake, the data warehouse built for the cloud.

Before starting, it’s worth considering the underlying Snowflake architecture and explaining when Snowflake caches data. The diagram below illustrates the overall architecture, which consists of three layers: 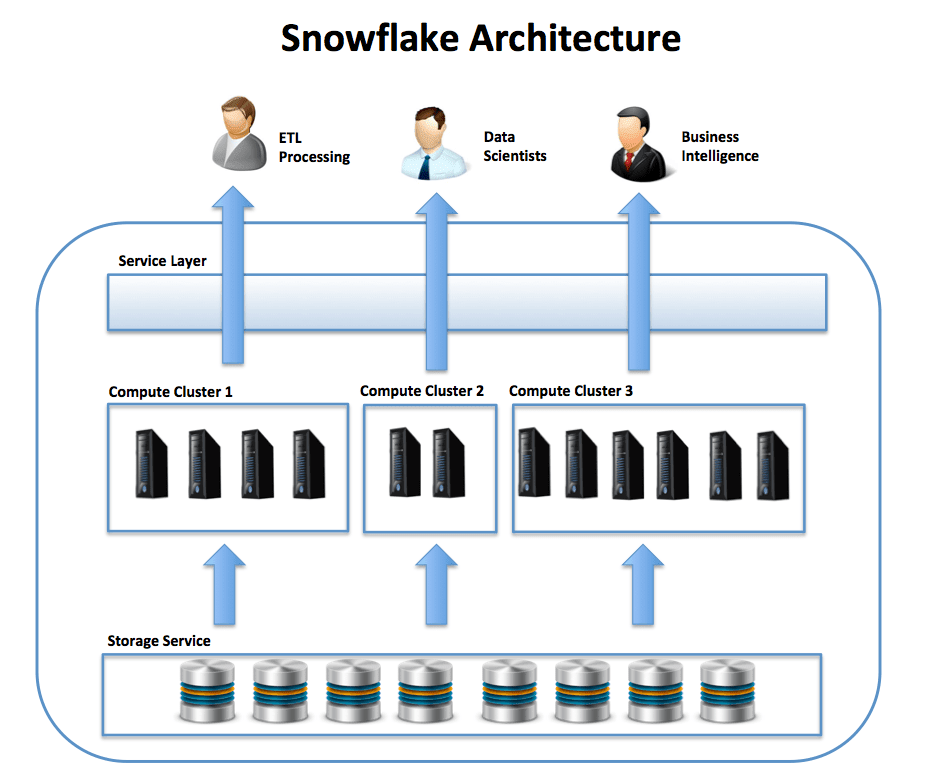 The diagram below illustrates the levels at which data and results are cached for subsequent use: 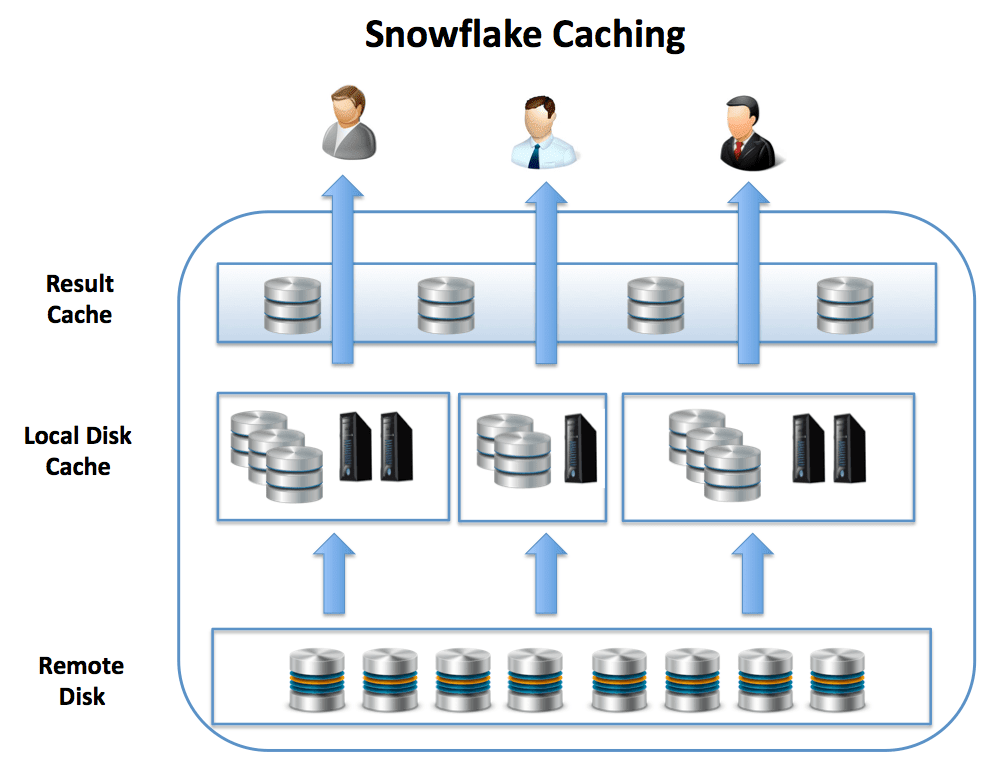 Every Snowflake database is delivered with a pre-built and populated set of Transaction Processing Council (TPC) benchmark tables. To test the result of caching, I set up a series of test queries against a small subset of the data, which is illustrated below. 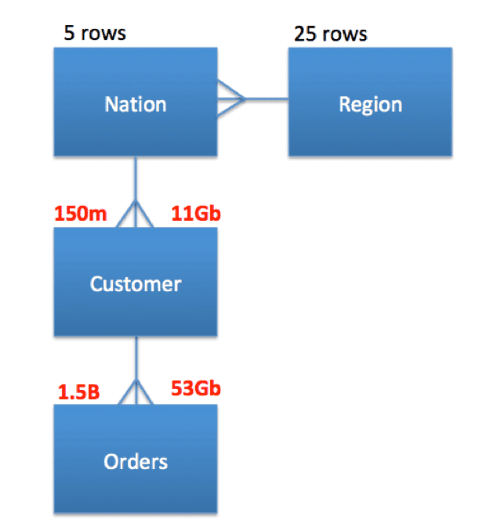 All the queries were executed on a MEDIUM sized cluster (8 nodes) and joined the tables. The tables were queried exactly as is, without any performance tuning.

The following query was executed multiple times, and the elapsed time and query plan were recorded each time. 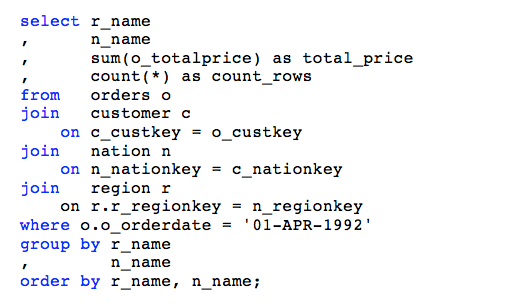 The screenshot below illustrates the results of the query which summarise the data by Region and Country. In total, the SQL queried, summarized, and counted 1.5 billion rows of data. The screenshot shows the first eight lines returned.

The test sequence was as follows:

Each query included over 60Gb of raw data, although as Snowflake was able to automatically compress the data, the actual data transfers were around 12Gb. As Snowflake is a columnar data warehouse, it automatically returns the columns needed rather then the entire row to maximize query performance.

This query returned in around 20 seconds and demonstrates it scanned around 12Gb of compressed data, with 0% from the local disk cache. This means it had no benefit from disk caching. 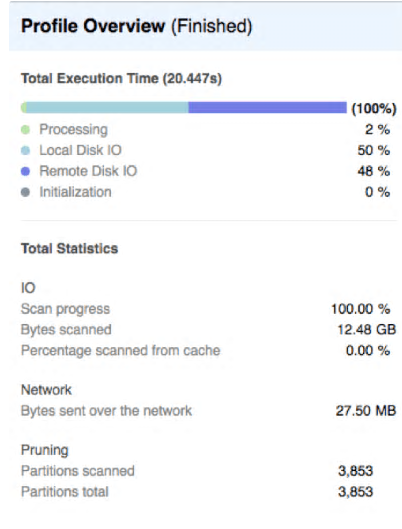 The bar chart above demonstrates around 50% of the time was spent on local or remote disk I/O, and only 2% on actually processing the data. Clearly any design changes we can do to reduce the disk I/O will help this query.

This query was executed immediately after, but with the result cache disabled, and it completed in 1.2 seconds – around 16 times faster. In this case, the Local Disk cache (which is actually SSD on Amazon Web Services) was used to return results, and disk I/O is no longer a concern. 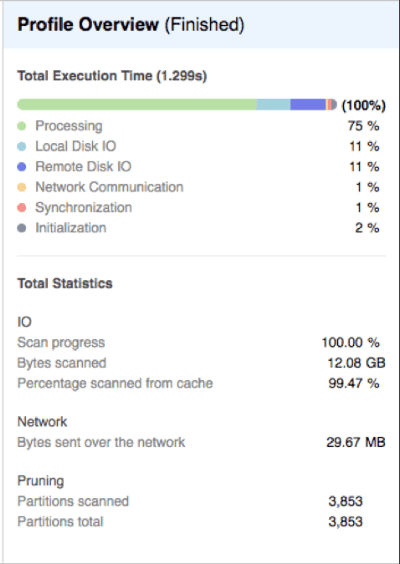 In the above case, the disk I/O has been reduced to around 11% of the total elapsed time, and 99% of the data came from the (local disk) cache. While querying 1.5 billion rows, this is clearly an excellent result.

This query returned results in milliseconds and involved re-executing the query, but with this time, the result cache enabled. Normally, this is the default situation, but it was disabled for testing purposes.

The above profile indicates the entire query was served directly from the result cache (taking around 2 milliseconds). Although not immediately obvious, many dashboard applications involve repeatedly refreshing a series of screens and dashboards by re-executing the SQL. In these cases, the results are immediately returned in milliseconds.

Although more information is available in the Snowflake Documentation, a series of tests demonstrated the result cache will be reused unless the underlying data (or SQL query) has changed. As a series of additional tests demonstrated inserts, updates and deletes which don't affect the underlying data are ignored, and the result cache is used, provided data in the micro-partitions remains unchanged.

Finally, results are normally retained for 24 hours, although the clock is reset every time the query is re-executed, up to a limit of 30 days, after which results query the remote disk.

The sequence of tests was designed purely to illustrate the effect of data caching on Snowflake. The tests included:-

To put the above results in context, I repeatedly ran the same query on Oracle 11g production database server for a tier one investment bank and it took over 22 minutes to complete.

Finally, unlike Oracle where additional care and effort must be made to ensure correct partitioning, indexing, stats gathering and data compression, Snowflake caching is entirely automatic and available by default. Absolutely no effort was made to tune either the queries or the underlying design, although there are options available, which I'll discuss in the next article. Sign up below for further details.

Thank you for reading this. If you found this article interesting and would like to know more, you can read more about Snowflake, and Data Warehousing at www.analytics.today.

One of the most popular articles I’ve written describes my experience as an Oracle warehouse architect and compares this to how Snowflake would handle the problems I encountered. You can read more at The Ideal Data Warehouse Architecture.