With the advancement of technology, the data production rate has increased. In numerous domains of application, it is a critical necessity to process such data, in real-time rather than a store and process approach. When it comes to real-time processing, many of the applications adopt the pipeline architecture to process data in a streaming fashion. The pipeline architecture is a parallelization methodology that allows the program to run in a decomposed manner. The pipeline architecture consists of multiple stages where a stage consists of a queue and a worker. Each stage of the pipeline takes in the output from the previous stage as an input, processes it, and outputs it as the input for the next stage. One key factor that affects the performance of pipeline is the number of stages. In this article, we will first investigate the impact of the number of stages on the performance. We show that the number of stages that would result in the best performance is dependent on the workload characteristics.

The pipeline architecture is a commonly used architecture when implementing applications in multithreaded environments. We can consider it as a collection of connected components (or stages) where each stage consists of a queue (buffer) and a worker.

Figure 1 depicts an illustration of the pipeline architecture.

Let m be the number of stages in the pipeline and Si represents stage i. Let Qi and Wi be the queue and the worker of stage I (i.e. Si) respectively.

There are several use cases one can implement using this pipelining model. For example, sentiment analysis where an application requires many data preprocessing stages, such as sentiment classification and sentiment summarization. Furthermore, the pipeline architecture is extensively used in image processing, 3D rendering, big data analytics, and document classification domains.

This section provides details of how we conduct our experiments. The workloads we consider in this article are CPU bound workloads. Our initial objective is to study how the number of stages in the pipeline impacts the performance under different scenarios. We use the notation n-stage-pipeline to refer to a pipeline architecture with n number of stages. To understand the behavior, we carry out a series of experiments. The following are the parameters we vary:

We implement a scenario using the pipeline architecture where the arrival of a new request (task) into the system will lead the workers in the pipeline constructs a message of a specific size. We consider messages of sizes 10 Bytes, 1 KB, 10 KB, 100 KB, and 100MB.

Let us now explain how the pipeline constructs a message using 10 Bytes message. Let us assume the pipeline has one stage (i.e. 1-stage-pipeline). A request will arrive at Q1 and will wait in Q1 until W1processes it. Here, the term “process” refers to W1 constructing a message of size 10 Bytes. When the pipeline has two stages, W1 constructs the first half of the message (size = 5B) and it places the partially constructed message in Q2. W2 reads the message from Q2 constructs the second half. When there is m number of stages in the pipeline, each worker builds a message of size 10 Bytes/m. We note that the processing time of the workers is proportional to the size of the message constructed. Taking this into consideration, we classify the processing time of tasks into the following six classes:

Impact of Processing Time on Performance 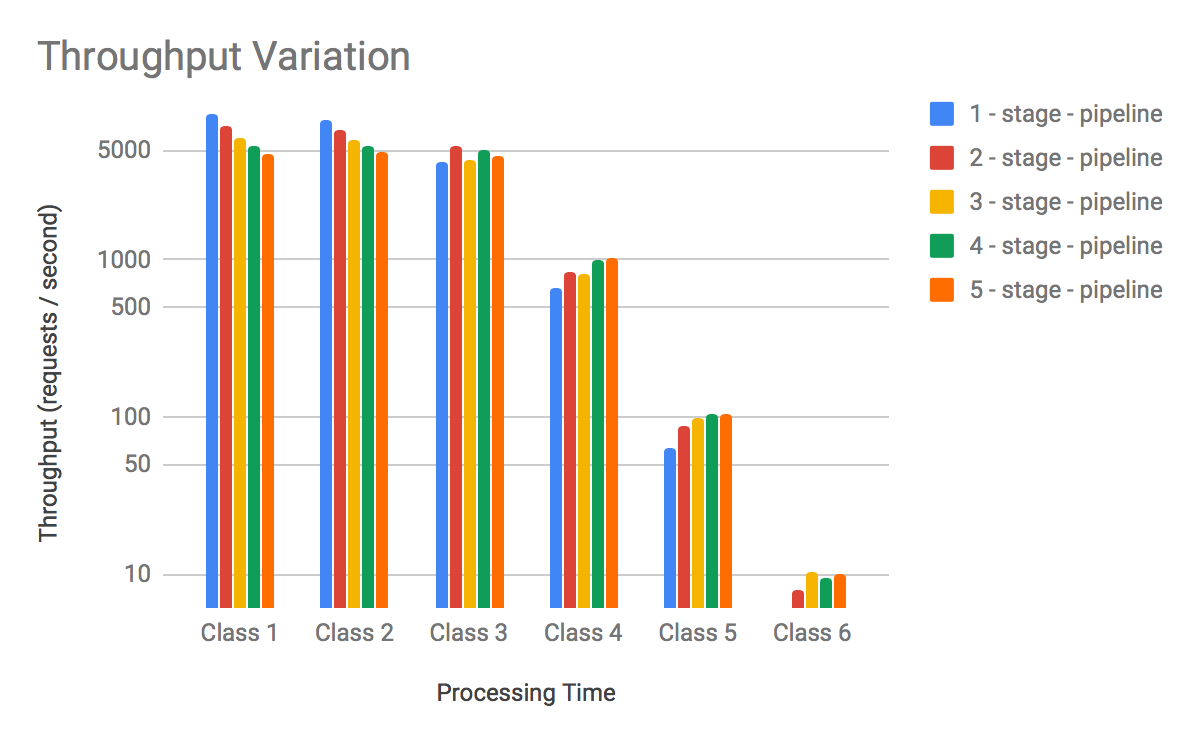 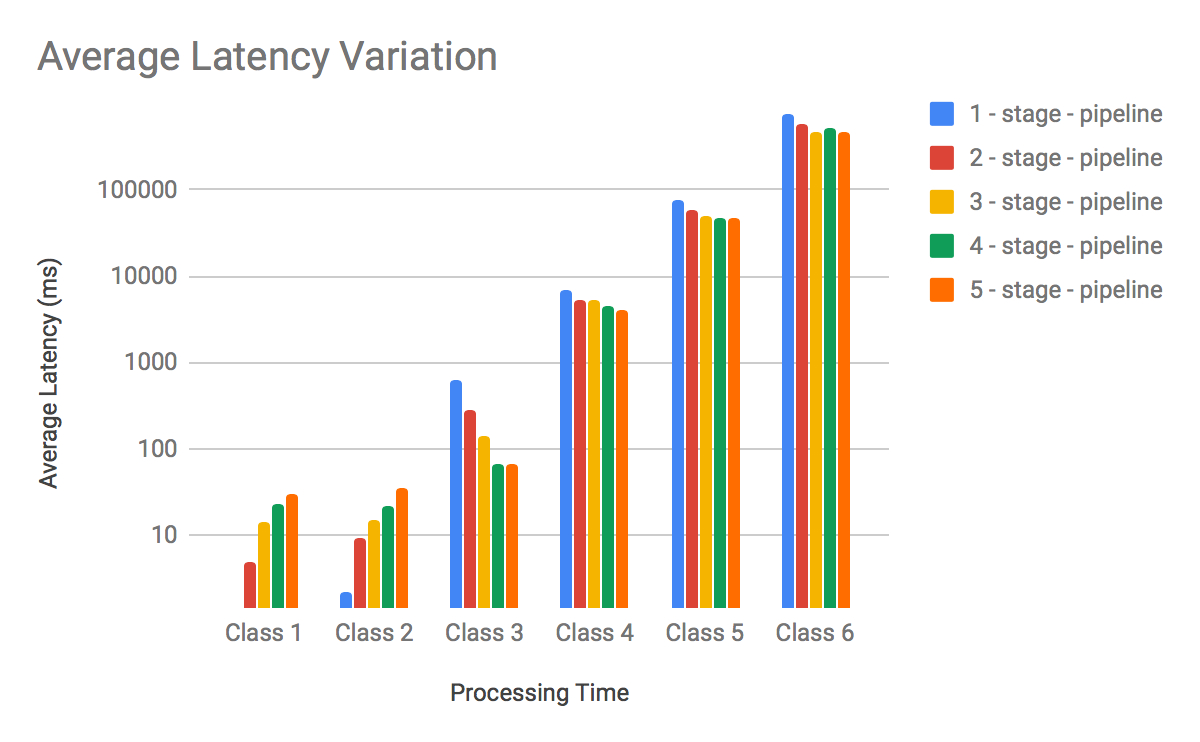 Let us now take a look at the impact of the number of stages under different workload classes. The following table summarizes the key observations.

Let us now try to reason the behavior we noticed above. It is important to understand that there are certain overheads in processing requests in a pipelining fashion. For example, when we have multiple stages in the pipeline, there is a context-switch overhead because we process tasks using multiple threads. The context-switch overhead has a direct impact on the performance in particular on the latency. In addition, there is a cost associated with transferring the information from one stage to the next stage. Transferring information between two consecutive stages can incur additional processing (e.g. to create a transfer object), which impacts the performance. Moreover, there is contention due to the use of shared data structures such as queues which also impacts the performance.

Impact of Arrival Rate on Performance 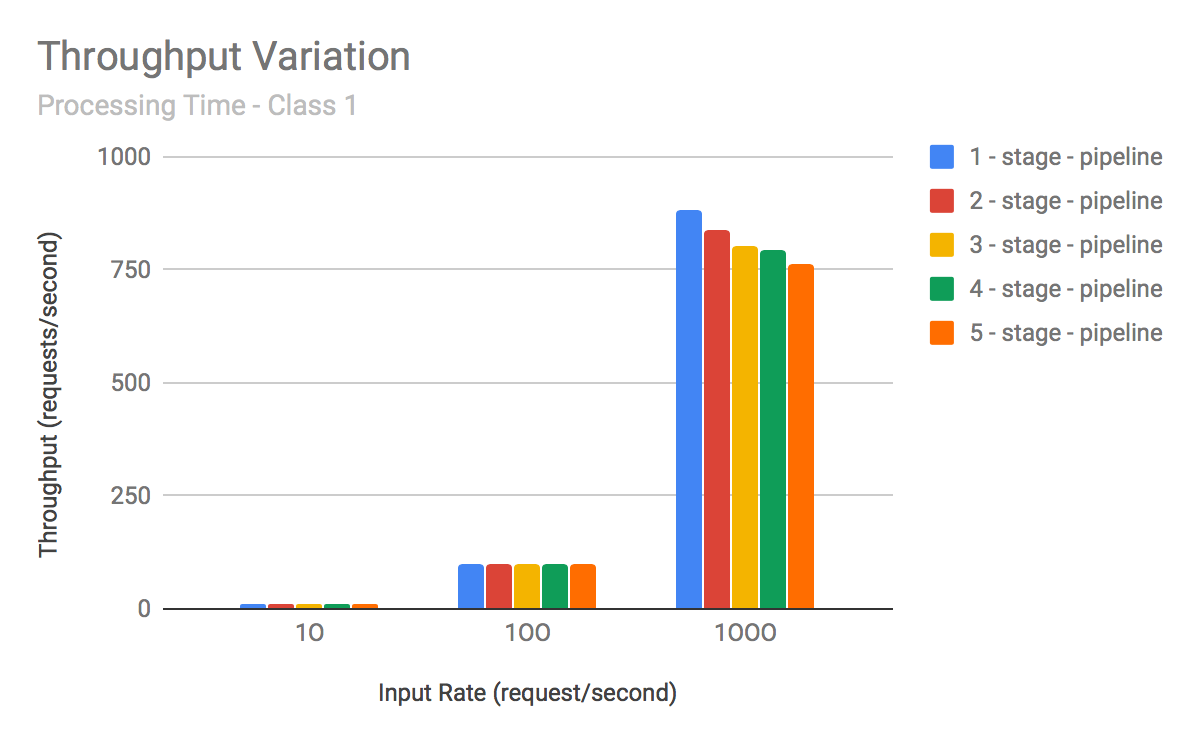 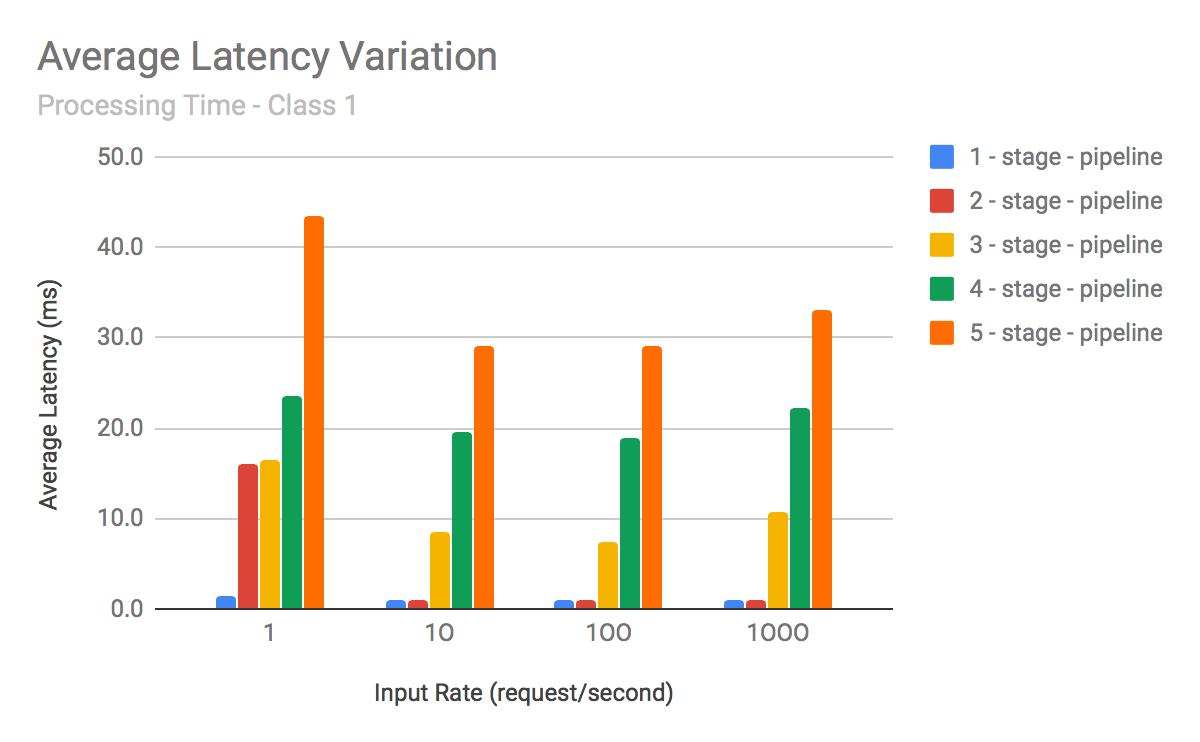 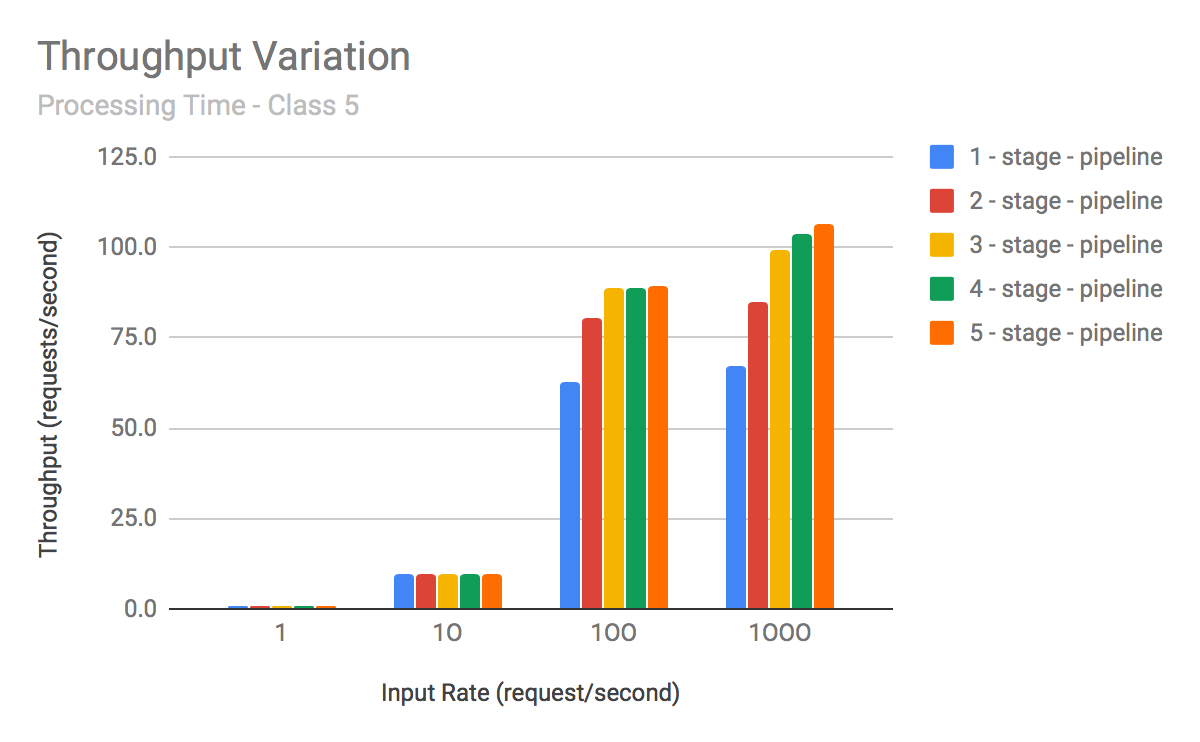 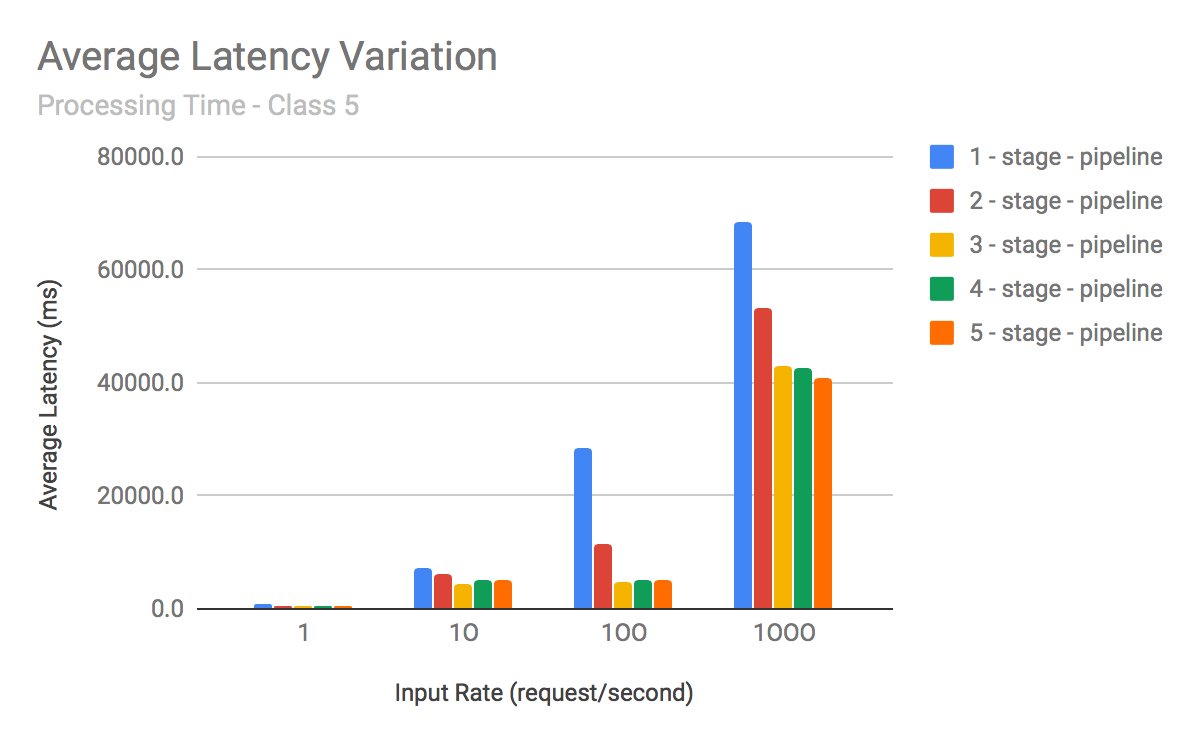 We note from the plots above as the arrival rate increases, the throughput increases and average latency increases due to the increased queuing delay. Let us now try to understand the impact of arrival rate on class 1 workload type (that represents very small processing times). We note that the pipeline with 1 stage has resulted in the best performance. As pointed out earlier, for tasks requiring small processing times (e.g. see the results above for class 1), we get no improvement when we use more than one stage in the pipeline. Here, we note that that is the case for all arrival rates tested. In the case of class 5 workload, the behavior is different, i.e. the number of stages that would result in the best performance varies with the arrival rates.

Published at DZone with permission of Nihla Akram. See the original article here.