Today’s modern businesses require faster software feature releases to produce high-quality products and to get to market quickly without sacrificing software quality. To ensure successful deployments, the accelerated release of new features or bug fixes in existing features requires rigorous end-to-end software testing. While manual testing can be used for small applications or software, large and complex applications require dedicated resources and technologies like python testing frameworks, automation testing tools, and so on to ensure optimal test coverage in less time and faster quality releases. PyTest is a testing framework that allows individuals to write test code in Python. It enables you to create simple and scalable test cases for databases, APIs, and user interfaces. PyTest is primarily used for writing API tests. It aids in the development of tests ranging from simple unit tests to complex functional tests. According to a report published by future market insights group, the global automation testing market is expected to grow at a CAGR of 14.3%, registering a market value of US$ 93.6 billion by the end of 2032.

Selection of the right testing framework can be difficult and relies on parameters like feasibility, complexity, scalability, and features provided by a framework. PyTest is the go-to test framework for a test automation engineer with a good understanding of Python fundamentals. With the PyTest framework, you can create high-coverage unit tests, complex functional tests, and acceptance tests. Apart from being an extremely versatile framework for test automation, PyTest also has a plethora of test execution features, such as parameterizing, markers, tags, parallel execution, and dependency.

The diagram below shows a typical structure of a Pytest framework. 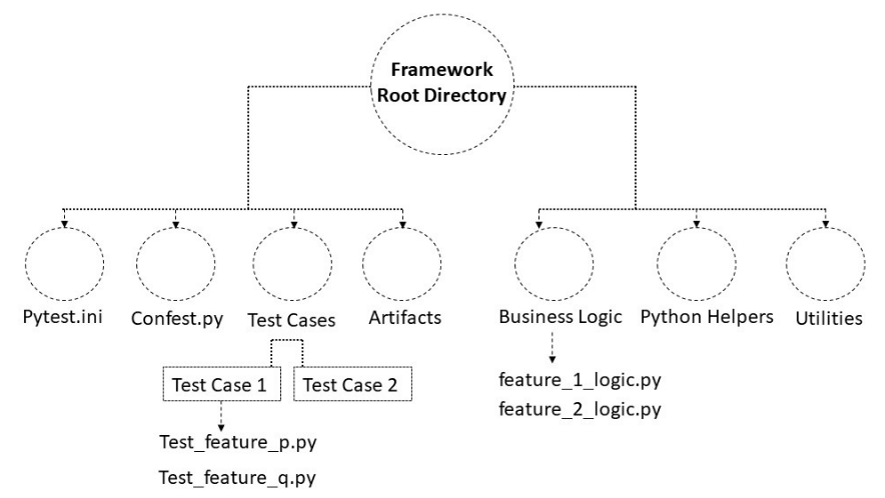 As shown above, in the structure, the business logic of the framework core components is completely independent of Pytest components. Pytest makes use of the core framework, just like instantiating the objects and calling their functions in the test script. Test script file name should either start with `test_` or end with `_test`. The test function name should also be in the same format. Reporting in Pytest can be taken care of by Pytest-HTML reporting.

The most prominently used feature of Pytest is Fixtures. Fixtures, as the name suggests, are decorator functions that are used in pytest to generate a specific condition that needs to be arranged for the test to be run successfully. The condition can be any precondition, like creating objects of the classes required, bringing an application to a specific state, bringing up the mockers in case of unit tests, initializing the dependencies, etc. Fixtures also take care of the teardown or reverting of the conditions that were generated after the test execution is completed. In general, fixtures take care of the setup and teardown conditions for a test.

The setup and teardown do not have to be just for the test function. The scope of the setup may differ from a test function to as large as the whole test session. This means the setup-teardown is executed only once per defined scope. To achieve the same, we can define the scope along with the fixture decorator i.e., session, module, class, and function.

Pytest provides the flexibility to use a fixture implicitly or call it explicitly, with autouse parameter. To call the fixture function by default, the autouse parameter value needs to be set to True, else to False.

All the fixtures that are to be used in the test framework are usually defined in conftest.py.  It is the entry point for any Pytest execution. Fixtures need not be autouse=True. All defined fixtures can be accessed by all the test files. conftest.py needs to be placed in the root directory of the Pytest framework.

Pytest provides numerous hooks that will be called in to perform a specific setup. Hooks are generator functions that yield exactly once. Users can also write wrappers in conftest for the Pytest hooks.

Pytest provides markers to group a set of tests based on feature, scope, test category, etc. The test execution can be auto-filtered based on the markers. i.e., acceptance, regression suit, login tests, etc. Markers also act as an enabler for parameterizing a test. The test will be executed for all the parameters that are passed as the argument. Note, Pytest considers a test for one parameter as a completely independent test. Many things can be achieved with markers, like marking a test to skip, skipping on certain conditions, depending on a specific test, etc.

Pytest does not require the test scripts to have their assertions. It works flawlessly with Python inbuilt assertions.

All default configuration data can be put in pytest.ini, and the same can be read by the conftest without any specific implementation.