This is the third in a series of posts on the new “Red Deer” (https://github.com/jboss-reddeer/reddeer) open source testing framework for Eclipse. In the previous posts in this series, we introduced Red Deer, and examined how to create custom requirements for test programs. In this post, we’ll introduce Red Deer’s test Recorder feature.

One of Red Deer’s goals has always been for it to be an easy to use test platform, but it’s always lacked the convenience of a keystroke recording tool. Until now that is. In this post, we’ll take a look at the new Red Deer Recorder. Before we look at how we can use the Recorder, let’s take a minute to understand just how it works.

How the Red Deer Recorder Works

Within the SWT (Standard Widget Toolkit), the org.eclipse.swt.widgets.Display class provides a filter method to control whether a listener is notified when an event of a certain type occurs. The Red Deer Recorder sets up filters for events such as when a UI element is selected, when an item in a tree is expanded, when a mouse is clicked, etc. When each of these types of events occurs, it is redirected to the Red Deer Recorder, where the event is translated into SWTBot or Red Deer source code statements that you can insert into your test programs.

Let’s take a closer look. The Red Deer Recorder is about rules. To be specific, a hierarchy of Simple and Complex rules.

Based on the filters defined (by the addFilter(int eventType, Listener listener) method) on the org.eclipse.swt.widgets.Display class, the Recorder tries to match each UI event to a Simple rule. Each Simple rule contains a test to see if the rule applies to a particular type of event.

When the Recorder finds a match, that is, when the right type of rule is found for the event that was received (such as how a ButtonRule applies to Event whose type is swt.Selection and whose widget is a Button UI element), the Recorder then examines the widget to determine its properties. In the case of a Button, these properties include the text the Button displays, its type (Push/Check/Arrow/Radio/Toggle), and whether the Button widget is encapsulated inside of another widget such as a Form. Once the Recorder has determined all the Button’s properties, then it can generate RedDeer code.

A more complex scenario involves actions in an event generating more events, such as a context menu. Complex scenarios require Complex rules. Let’s look at what happens if you want a test program to select an item from the context menu of a project as displayed in the Project Explorer. The sequence of actions here is that you click with the right mouse button (this generates the first event - mouse down) and then you will click on menu item from context menu (this generates the second event - selection). Having your test program record only the second event isn’t enough, as your test program won’t be able to recognize if the selected menu item is part of a shell menu or a view menu or a context menu. We also need the first event, the right click, in order to be to determine that this menu item was part of the context menu.

First, the Recorder only listens for specific types of events (Selection/Expand etc)

Second, the Recorder tries to match events to simple rules

In the previous posts in this series, we wanted to be able to extend Red Deer itself as we wanted to create custom requirements. Accordingly, in those posts, we downloaded the red Deer source code. This time, we only have to install the Red Deer Recorder. The steps to do this are:

Navigate to: Help->Install New Software, then create a new software site repository with this URL: http://download.jboss.org/jbosstools/builds/staging/RedDeer_master/all/repo/ 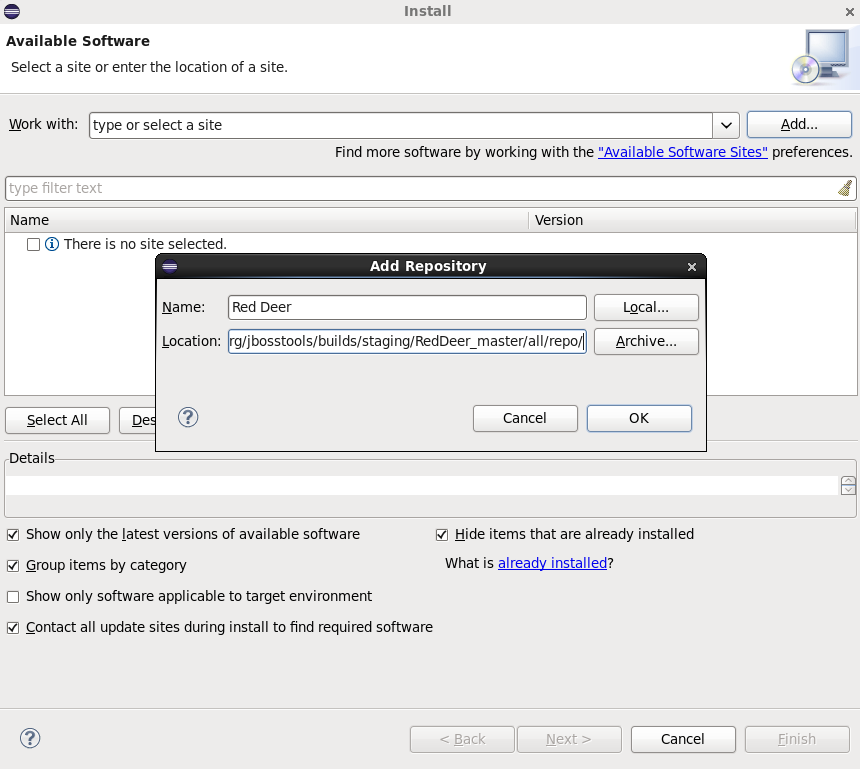 Then, select the Red Deer Recorder from the menu of available software and press the “Next&gt;” button: 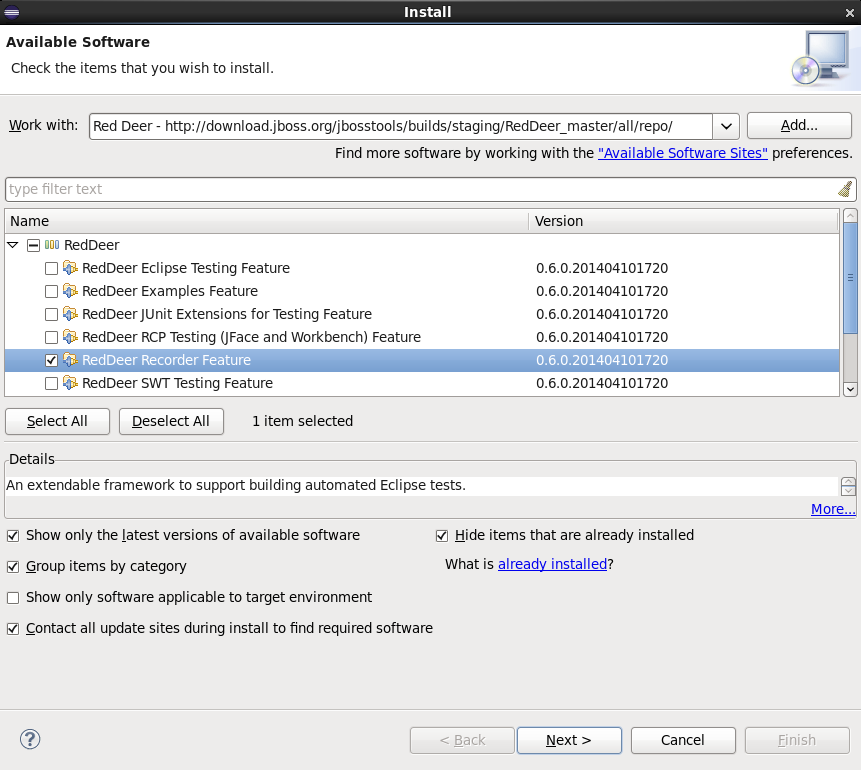 And that’s it. The Recorder is installed. Let’s move on and create a new recording.

To start the Recorder, navigate to File->New->Other, then select "Run Test Recorder": 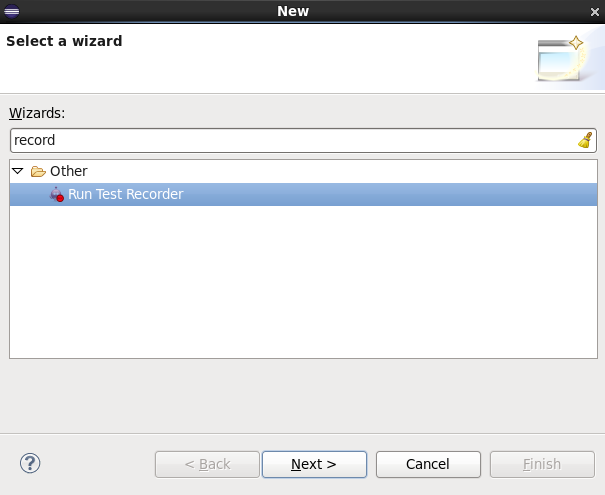 Then press the “Next” button. 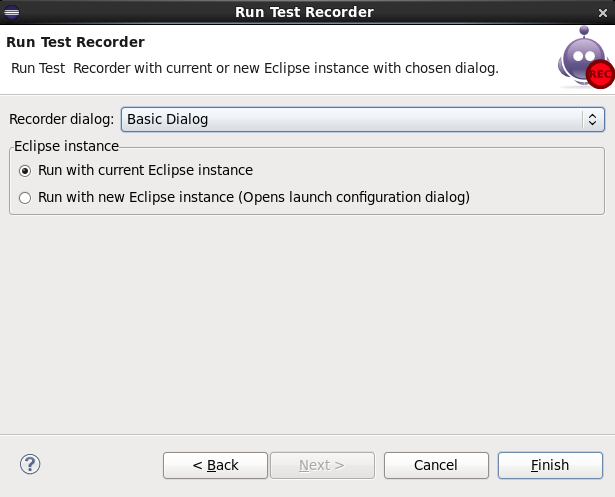 The Recorder now presents us with some options. We’ll keep things simple and select the Basic Dialog. In this mode of operation, the Recorder listens to your keystrokes and mouse actions, parses them through its simple and complex rules, and generates test code for you.

(The Recorder’s other mode of operation is the JDT (Java Development Tools) Dialog. In this mode, you can use the use the Recorder’s UI as an IDE for test code development. In the current release of Red Deer, the JDT is still something of a work in progress. We’ll look at the JDT Dialog in detail in a later post in this series when the dialog’s design is more mature.)

In keeping with our goal to keep things simple, we’ll also select “Run with current Eclipse instance.” When you press the “Finish” button, the Recorder appears: 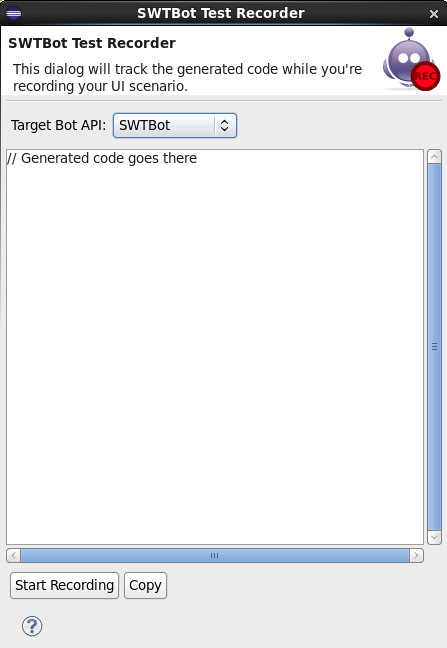 At this point, we have another choice to make as the Recorder can generate either SWTBot source code or Red Deer source code. Let’s select Red Deer and press the “Start Recording” button to get started with a new recording. 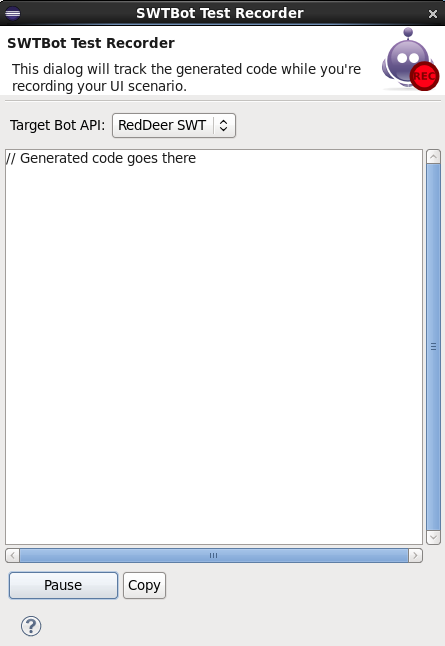 If we perform a task in the UI, we’ll see all the UI actions and keystrokes that we perform automatically translated into Red Deer source code. Let’s create a new Maven project and then examine the code the Recorder generates.

After we start the recorder, to create the new Maven project, navigate to: File-&>New->Other->Maven->Project and create a simple project: 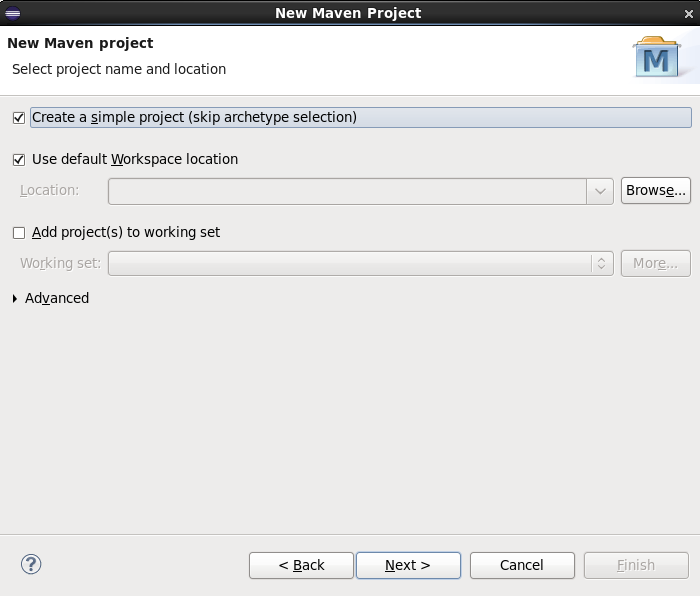 We’ll provide the minimal information on the new project: 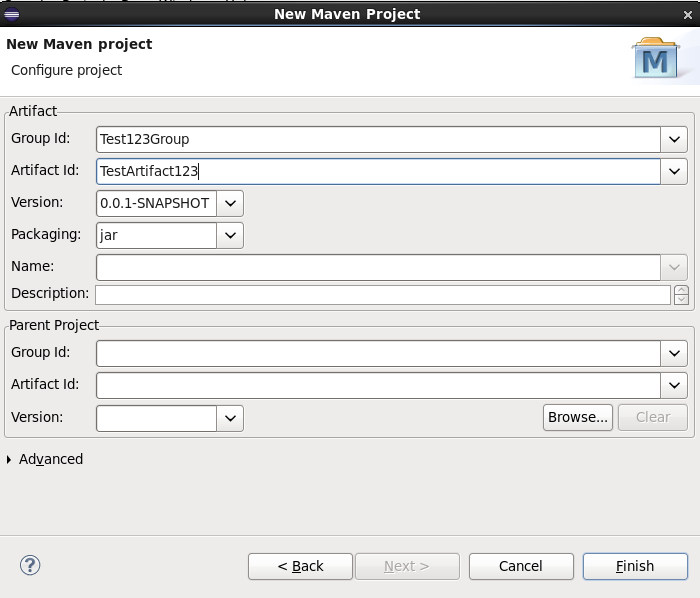 And here’s the code that the Recorder generates:

Then, you can easily copy the code into a Red Deer test program.

In Conclusion - A Word About Red Deer and the Recorder

Red Deer makes creating automated tests easier. With the new Recorder, Red Deer makes it even easier to create tests and to create new tests. As of this writing, the Recorder is a work in progress, as is Red Deer itself. If you are interested in building automated tests for Eclipse-based products, now is the time to get involved with Red Deer. Milestone 0.5 was just released (April 2014), and Red Deer will continue to grow and evolve in the future.

The author would like to thank all the contributors to Red Deer (https://github.com/jboss-reddeer/reddeer/blob/master/contributors.txt), especially Rastaslav Wagner and Michael Istria for their work on the Recorder.