The purpose of this article is to show how easily the WSO2 API Manager can be deployed in OpenShift. For simplicity, I am going to explain the deployment process using Minishift.

The following softwares are expected to be present in your system for executing this example.

Before we start, let's go through a mini introduction of Minishift and its installation. The installation process of Minishift is quite straightforward. Here is a link to the official documentation.

I am using Mac and here is the command for its installation:

After that, you need to configure some virtualization environment. Please refer to this official document regarding this.

Once you are done with that, execute the following command to start the Minishift cluster:

The following things will happen after successful execution of the command:

Here is the architecture diagram of Minishift taken from the official documentation. 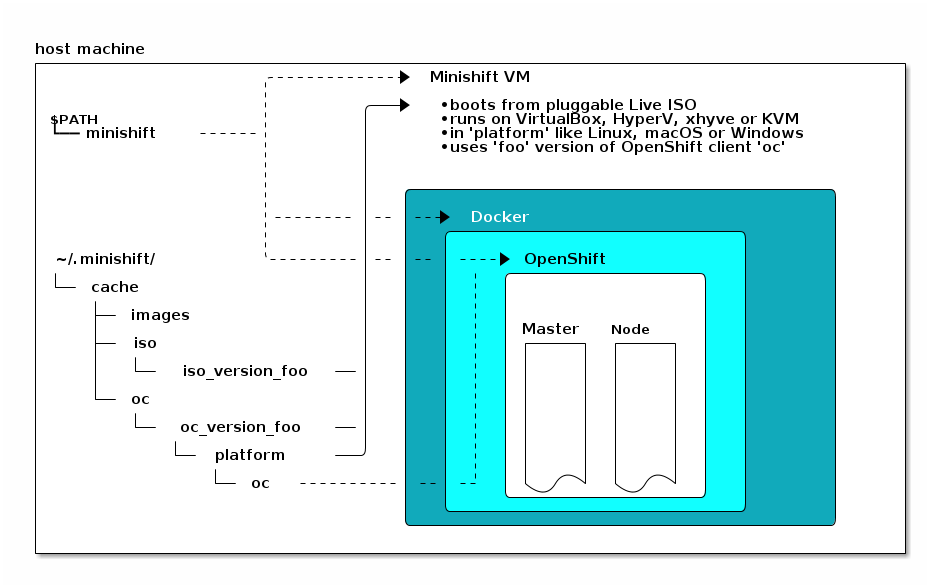 To verify the Docker daemon (Engine) running in the Minishift VM, execute the following command:

Here is a sample output:

To point to the Docker daemon (Engine) running in the Minishift VM just execute the following command,

That's it and you can check the containers, images etc that belong to that Docker daemon (Engine).

To check the Minishift GUI, just execute the following command:

The default login and password are developer and developer.

It's not necessary to download the OC CLI separately. Once the Minishift VM is up and running, you can have the information of the OC CLI installed in your local machine.

Execute the following command to check the OC CLI:

Here is the sample output:

Execute the following command to put the OC CLI in PATH variable:

Now, to verify the installation, run the command:

For more information, please go through the official documentation.

In this section, we are going to create a Docker image for WSO2 API Manager. The complete Dockerfile can be found on this GitHub URL. It's a very basic Dockerfile for the sake of simplicity. The focus of the article is not exploring Docker.

Here is a snapshot of the simple Dockerfile.

In the folder structure, under the product directory just copy and paste the JDK and WSO2 API Manager zip (tar) files and unzip them. After that, create the image. For example:

to check the image created. Note that these images are stored in the Docker daemon (Engine) running in the Minishift VM.

A project (namespace) can be created either by Web Console or OC. Here, I will demonstrate both ways.

It's quite simple to create a project via the console. To bring in the console, execute the following command.

This will open the web console in the default browser. Click the button Create Project in the pop-up and that's it.

Once a project is created, we need to deploy apps (Docker image, etc.) to the project. Here, the focus is deploying an app from a Docker image. For more information, please refer to this official document. 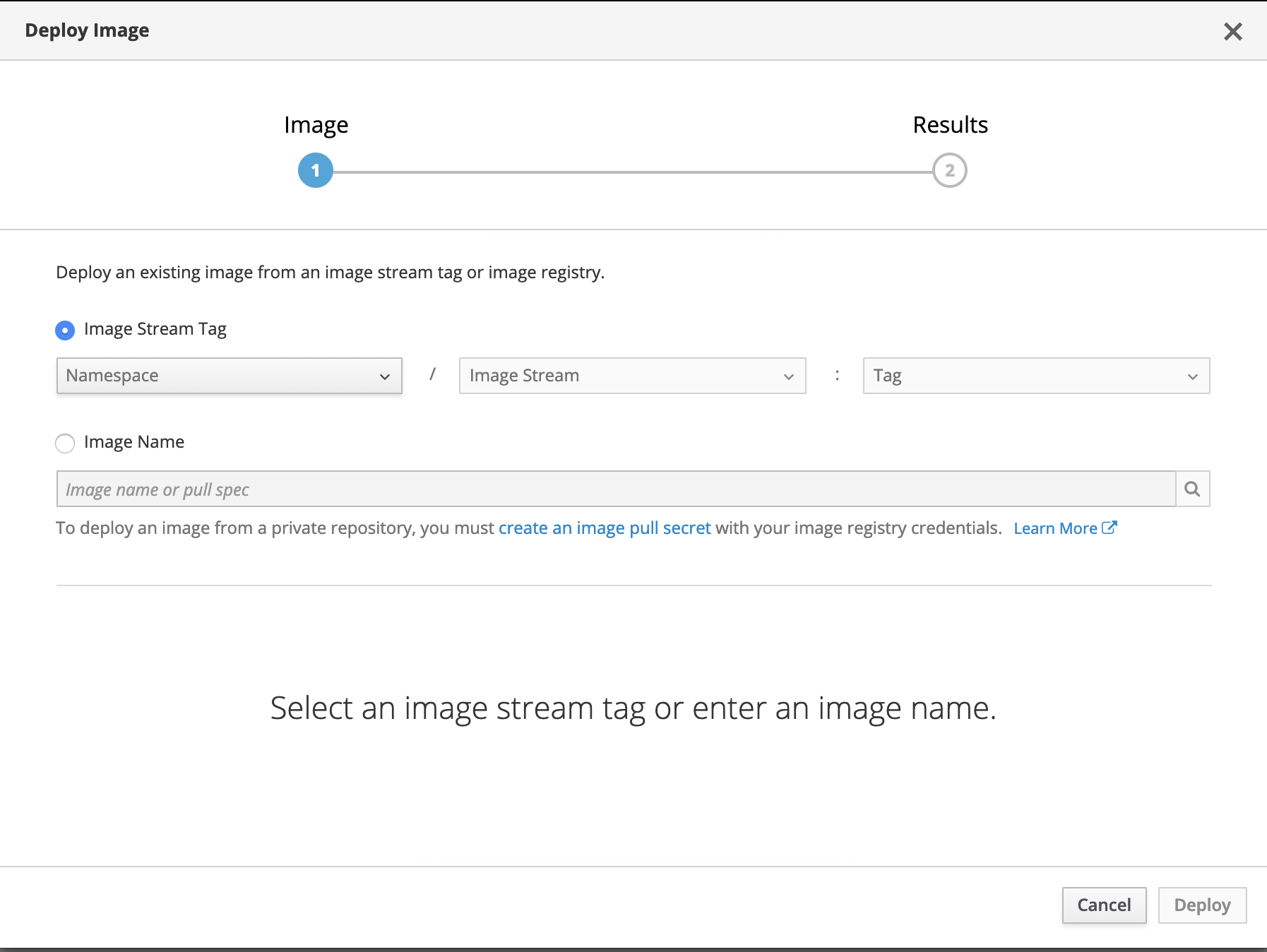 The focus of this article is to deploy an image from Image Stream. An alternative to this is to pull an image from docker registry (Docker Hub, local, or private).

Here is the complete process to push the docker image to the Minishift docker registry and create an image stream for it.

Create an Image Stream for the Project (Namespace) Created

Here, wso2am is the name of the image stream and wso2 is the project (namespace).

This is the expected format for tagging the Docker image.

To find out the Minishift Docker registry, execute the following command:

Here is a sample output:

This is the Minishift's internal docker registry host and port.

Remember that wso2am-centos was the name of the docker image we generated.

After tagging the Docker image, log in to the Docker registry using the following command:

After logging in successfully, push the image to the Docker daemon:

To check the Image Stream, execute the following command:

At this point, we have done the following things:

Now, the next steps will be to pull the image from the Image Stream and create the pod. This is quite straightforward and I am going to use the web console for it. Alternatively, you can use the OC tools for it without any restriction.

Click the Overview menu of the project and you will be presented this GUI. Then, select the Deploy Image option.

Now, choose the image stream and then click deploy, 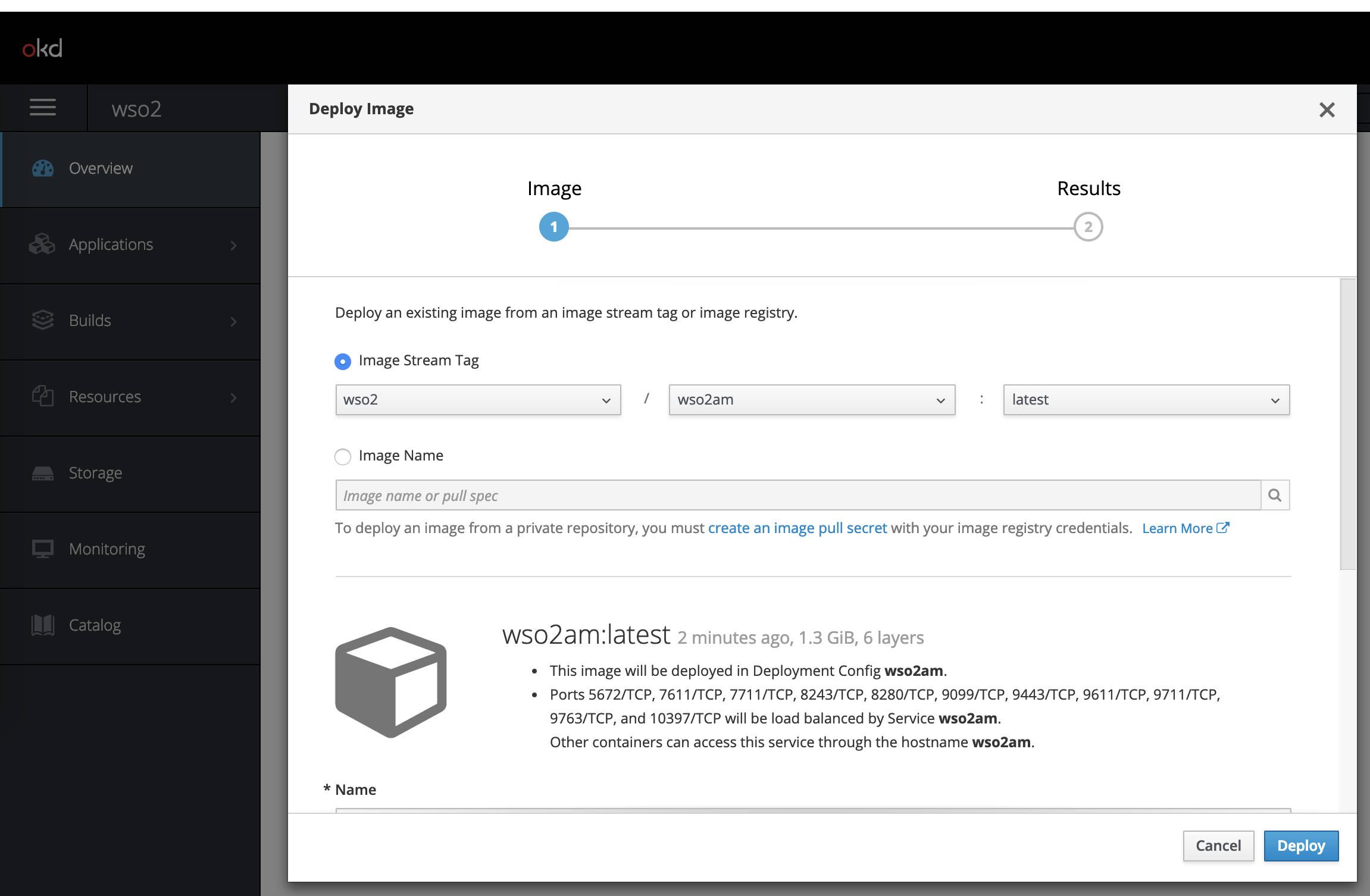 Once it's deployed, you can see the following page: 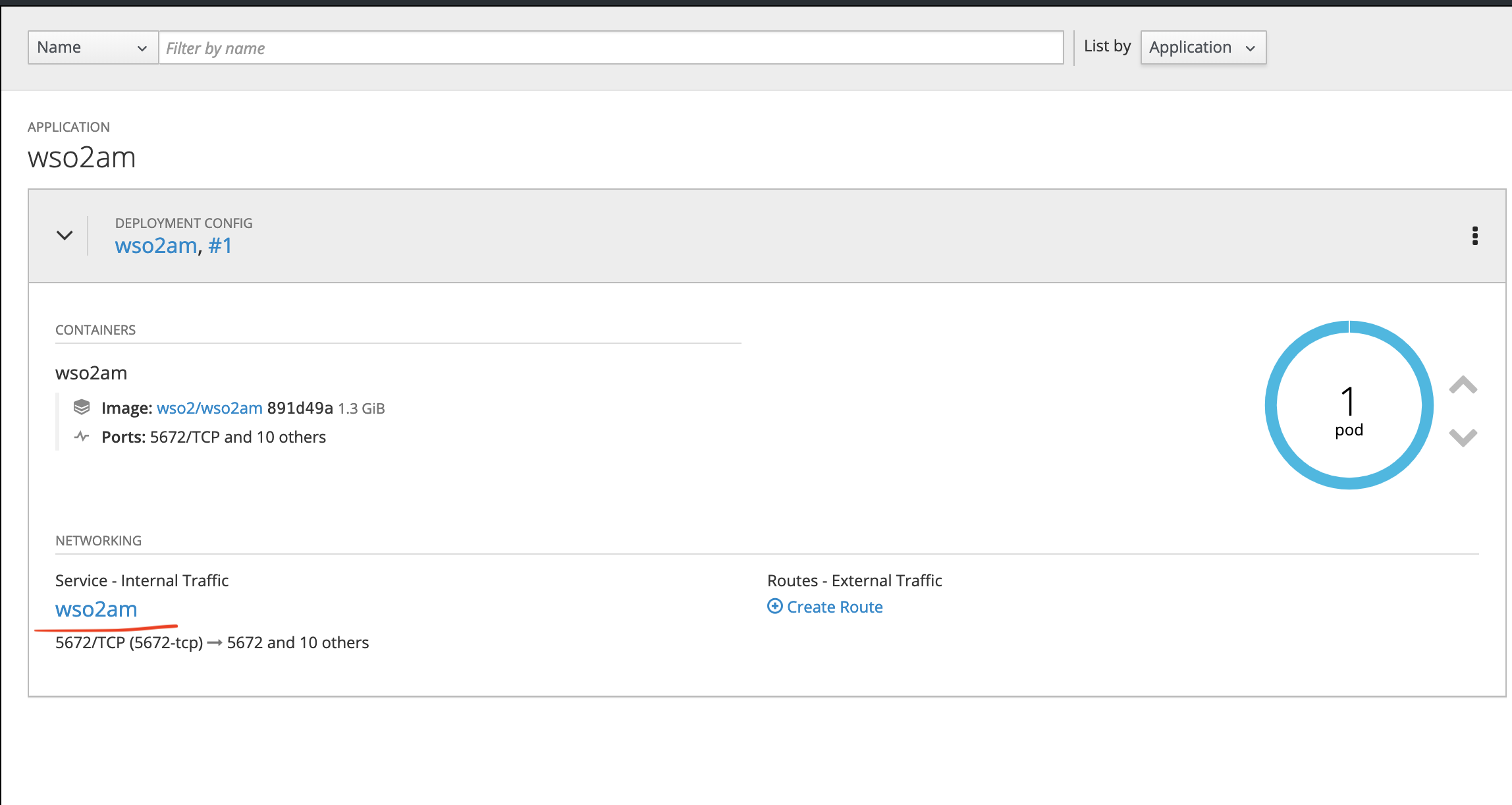 Click the service wso2am (marked in red) under the NETWORKING section and let's create a passthrough route. 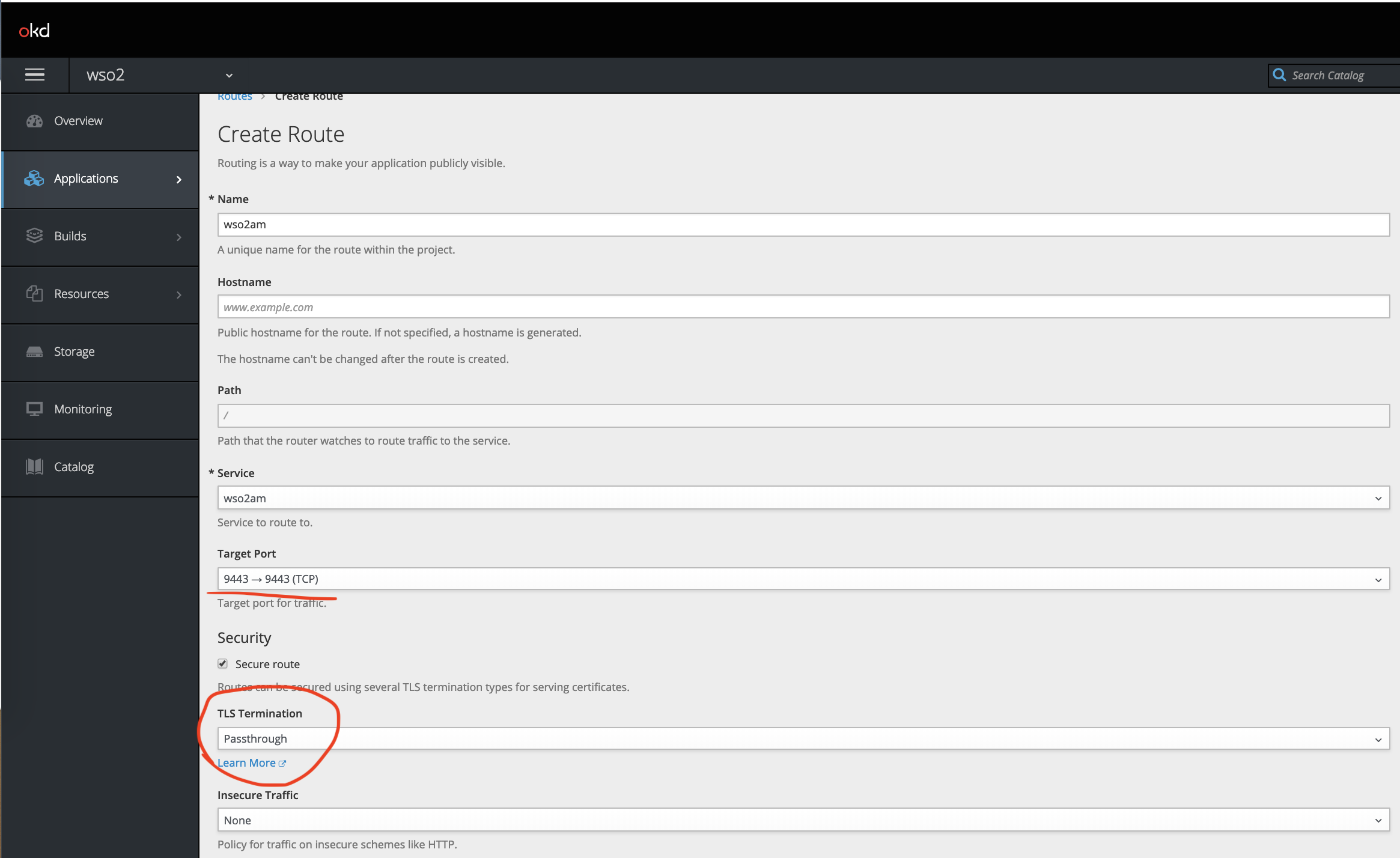 After successfully created the Route, you can view it as shown below, 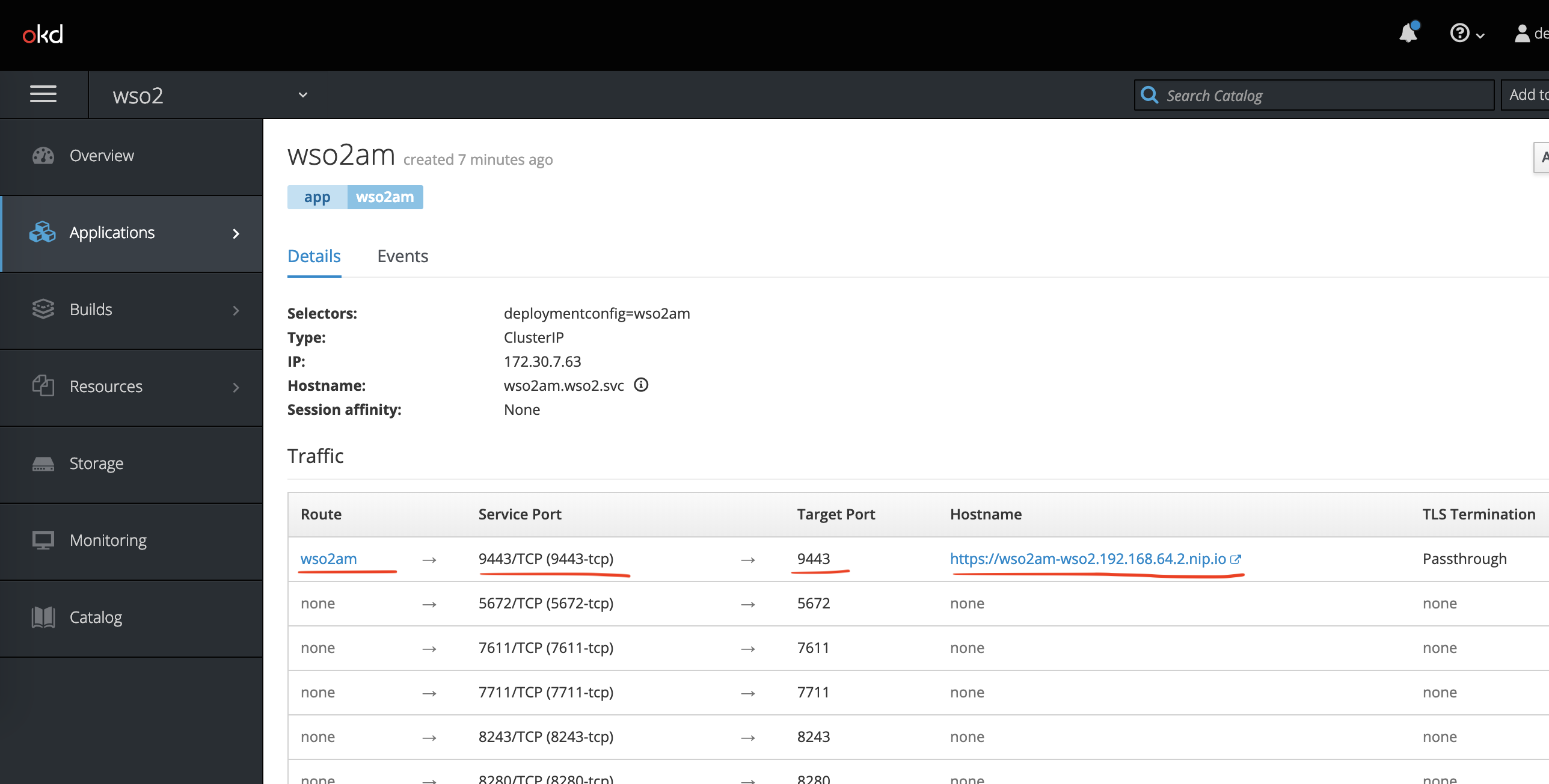 In my case, I will have the following URLs:

In this article, I have explained in a simple fashion how to deploy WSO2 API Manager in Openshift. In the next articles, I will try to add MySQL as a persistent store to the API Manager. Thanks for reading!