In this article series about Docker (with JMeter, Distributed, IBM MQ and Cloud) I described how Docker adoption simplifies the performance testing process with Apache JMeter™ and makes it more reliable. These advantages are obtained thanks to the flexibility of container virtualization, that is a key feature of Docker.

In this article, I will present another Docker applicability to performance testing: service stubbing with Docker containers. By replicating dependencies through stubbed services, testers can overcome the challenges dependency systems create to their test procedure: fragility, instability, and more. In this article I will show how to do this with Docker, and with JMeter to replicate the service. Then, you can use JMeter as the testing tool.

You might be surprised how stubbing can be mixed with Docker, but in the article I will introduce the necessary concepts and some practical examples. Let's get started.

With the increasing complexity of testing projects, more and more testing flows of the System Under Test are impacted by dependency system(s). When I say "dependency system" I am referring to:

The presence of dependency systems brings every manual or automatic testing project in a situation like the one described in the picture below.

In the picture above it is important to focus on the arrows too. These arrows describe the systems' perimeters and the interfaces used to exchange messages/information:

The presence of dependency systems can produce a series of unpleasant effects throughout the testing project (both for manual and automatic testing):

To eliminate, or highly reduce, these effects, one solution is to decouple the test procedure executed on the SUT from the uncontrolled dependencies. One way to decouple is adopting stubbed interfaces, with the goal of replicating the behaviour of dependencies. In this manner, the testing procedure does not encounter unpredictable behaviour as it would with the original dependencies system. Thus, the test perimeter will now include the stub services because they are part of testing process. So, we will add a new endpoint to the testing perimeter in our diagram. 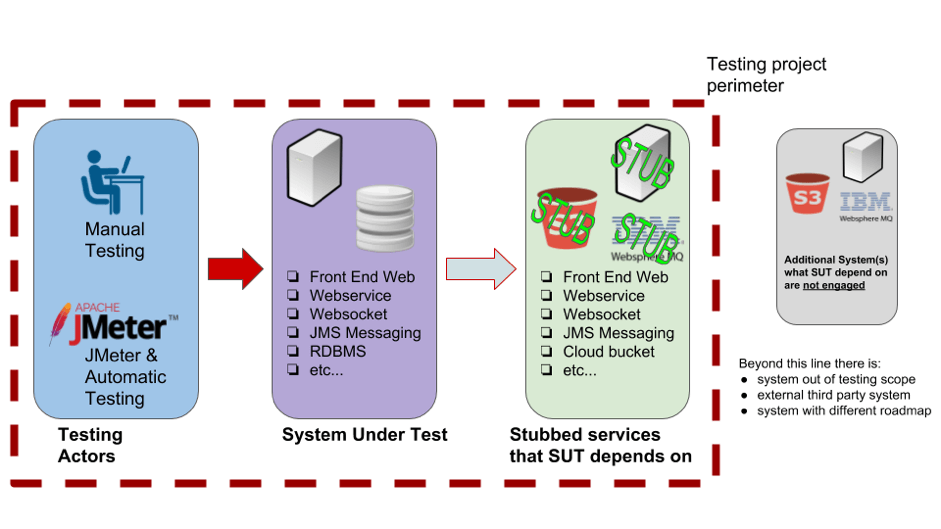 To create stubbed interfaces in out test plan we need to:

Let's understand the flow of the message/information exchange:

Concluding this section: stubbing might be the key to the success of a complex testing project.

Virtualization as a Shortcut for Service Stubbing

Developing a stub service require significant planning and implementation efforts. Sometimes, project members adopt quick and dirty solutions to speed up the software lifecycle activities. They assume they will need a short period of stub usage (e.g. developing one feature, testing one feature). A quick and dirty solution is attractive but it tends to:

Simple stub solutions are based on hard coded and/or parameterized data. There are more complex stub services, based on a data model solution. A setup of stub services becomes more complex and sometimes requires proper training, but obtaining stubbed services is more recommended for a project with a wider ambition.

The virtual stub service can be created using a virtualization layer. We will use a virtualization based on Docker, because Docker makes it possible to execute a stub in an isolated context that reproduces only the required features.

Docker offers the possibility to setup a stub service easily and with a high level of reliability. As we described in previous articles, the possibility to reproduce previously configured behaviour is quite instantaneous in Docker. Moreover, the virtualization layer creates an isolation that executes the stubbed interfaces as an external service.

Now it's time for some examples that will teach us how to do it. I will present two containers, and a stub specific service interface for each one. The proposed examples are my own: they use self assigned requirements without any correlation to a commercial situation.

In this example, we are required to set up a stub for a data source based on an S3 bucket that generates continuous data. This data can be characterized according to velocity, variety, and volume. A potential SUT target for this stub is a Big Data application.

Our test requirements for this example stub are:

By analyzing these requirements we can extract parameters that we add to the stub implementation to customize our stub behavior at boot time:

With the defined interface parameters and the expected output behaviour, we can proceed with the stub architecture definition. We will adopt Docker as stub resource manager and split our stub into three sub-systems:

The final stub design is presented in the picture above. This design assumes that the stub is queried by the testing procedure to verify testing goals (e.g. check a report file in the bucket).

As always, here is the code of the described application. You can also find it on GitHub. For this stub see the example code located in the "s3-stub" folder.

This PowerShell code creates a Docker machine while taking into account hardware requirements and the machine location (this can be another requirement for our stub). In the end, the code extracts the real machine IP address and configures its current shell to execute the next Docker command on the newly created Docker machine.

Please note: Service stubbing often requires simulating a service located over a network (e.g. local network, corporate network, worldwide), so we must be prepared for a situation where the stub location can be "rented" on the Cloud.

This code creates a custom Docker network where the containers our stub is composed of will be placed. Please note: the entire network and the related containers are invoked on the local machine, but executed on a remote machine thanks to the "env" command.

This code sets up a Minio server container, which takes the role of the S3 interface for our stub. The code steps are executed in the following order:

In the last part of the PowerShell code, we launch a JMeter container in detached mode. This container executes the logic of periodically uploading a new S3 object to the bucket. Before container execution it's necessary to upload the following on the Docker machine via the scp command:

The picture above shows the test plan structure of the JMeter script used for stub. This script

For implementation details, see the Groovy code committed on GitHub. When stub containers are running, it is possible to navigate over the bucket via the web by using the Docker machine IP address at port 9000.

You can now create your JMeter script for load testing the application.

This example covers messaging-oriented middleware by showing how to stub an IBM MQ based application. The key features that characterize this middleware are asynchronicity, routing, and transformation. Applications like IBM MQ are highly adopted where it is mandatory to facilitate message exchange with a standard API.

The final stub can simulate a remote endpoint that the SUT occasionally queries during the test project. This situation creates a complicated test and stubbing can be a good solution in a reasonable amount of time.

As already seen in the previous example, we have test requirements that define how the stub works:

Analyzing these requirements, we need to involve additional colleagues to resolve the knowledge gap necessary to setup our stub. In particular:

After an inquiry session and a series of "Elementary, my dear Watson" we can adopt a stub architecture that has three subsystems (again):

The final stub design is presented in the picture above. This design assumes that the stub is probably queried by the testing procedure to verify the testing goals (e.g. check queue stats).

Before describing the code it's necessary to provide a technical description of the stub and its containers. In detail:

Here is the code of the described application. The code described in this paper is available on GitHub. For this stub see the example code located in the folder "ibmmq-stub".

The above code is a mandatory precondition for container execution and it includes:

This code section is quite similar to the one already seen in IBM MQ in the previous Docker article. So after this Docker runs the command, a container is run with an IBM MQ instance inside with a TLS channel on the 1415 socket.

This is the last PowerShell section and it is related to the execution of a Maven container. This Docker runs a command that executes the stub main class by using a project file descriptor called a pom file. In addition:

After the execution of Docker run commands, the resulting stub is ready to be engaged by the SUT by producing the following actions:

Based on this current article and a previous one, the reader can implement a load script to test the final stub behavior.

In this article, I showed another way to use Docker in a performance project, by using service stubbing based on Docker virtualization. I also described examples that used various Docker containers we started working with in previous articles. These obtained stub services demonstrate container flexibility in different contexts (e.g. Maven container is for developing purpose).

After setting up your system, you can run performance tests on it with BlazeMeter. Create your JMeter script, scale it in BlazeMeter, share your tests with colleagues and managers, and analyze results.

To try out BlazeMeter, request a live demo from one of our performance engineers.