When correctly deployed, caching is one of the quickest ways to accelerate web content. Not only does caching place content closer to the end-user (thus reducing latency), it also reduces the number of requests to the upstream origin server, resulting in greater capacity and lower bandwidth costs.

The availability of globally-distributed cloud platforms like AWS and DNS-based global load balancing systems such as Route53 make it possible to create your own global content delivery network (CDN).

In this article, we’ll look at how NGINX and NGINX Plus can cache and deliver traffic that is accessed using byte-range requests. A common use case is HTML5 MP4 video, where requests use byte ranges to implement trick-play (skip and seek) video playback. Our goal is to implement a caching solution for video delivery that supports byte ranges and minimizes user latency and upstream network traffic.

We start with a 10 MB test file, containing the byte offset every 10 bytes so that we can verify that byte-range requests function correctly:

The contents of the file are as follows:

Now let’s add a 1 MB/s bandwidth limit to individual connections between the origin server and the NGINX proxy cache:

To check that delay is working as expected, we retrieve the entire file directly from the origin server:

It takes nearly 11 seconds for the file to be delivered, which is a reasonable simulation of the performance an edge cache that is pulling large files from an origin server over a bandwidth-limited WAN network.

Once NGINX has cached an entire resource, it services byte-range requests directly from the cached copy on disk.

What happens when content is not cached? When NGINX receives a byte-range request for uncached content, it requests the entire file (not a byte range) from the origin server and begins streaming the response to temporary storage.

As soon as NGINX receives the data required to satisfy the client’s original byte-range request, NGINX sends the data to the client. In the background, NGINX continues streaming the full response to a file in temporary storage. When the transfer is complete, NGINX moves the file to the cache.

We can demonstrate the default behavior quite easily with the following simple NGINX configuration:

We start by emptying the cache:

Then we request the middle ten bytes of 10Mb.txt:

NGINX sends a request to the origin server for the entire 10Mb.txt file and starts loading it into the cache. As soon as the requested byte range is cached, NGINX delivers it to the client. As reported by the time command, this happens in just over 5 seconds.

In our previous test, it took just over 10 seconds to deliver the entire file, meaning that after the middle byte range is delivered to the client, it takes about 5 more seconds for the entire contents of 10Mb.txt to be retrieved and cached. The access log for the virtual server records the transfer of the 10,486,039 bytes (10 MB) in the complete file, with a status code of 200:

If we repeat the curl request after the entire file is cached, the response is immediate because NGINX serves the requested byte range from the cache.

However, this basic configuration (and the resulting default behavior) presents a problem. If we request the same byte range a second time, after it is cached but before the entire file has been added to the cache, NGINX sends a new request for the entire file to the origin server, and begins a new cache fill operation. We can demonstrate this behavior with this command:

Imagine a scenario where users start viewing a video file immediately after it is published. If the cache-fill operation takes 30 seconds (as an example), but the delay between additional requests is less than this, the cache might never fill and NGINX would continue to send more and more requests for the entire file to the origin server.

NGINX offers two caching configurations that can be effective solutions for this problem:

Using a Cache Lock for a Single Cache-Fill Operation

The following configuration triggers an immediate cache-fill when the first byte-range request is received, and forwards all other requests to the origin server while the cache fill operation is in progress:

We repeat our test, requesting the middle byte range of 10Mb.txt. The file is not cached, and as in the previous test, time shows that it takes a bit over 5 seconds for NGINX to deliver the requested byte range (recall the network is limited to 1 Mb/s throughput):

Because of the cache lock, subsequent requests for byte ranges are satisfied almost immediately while the cache is being filled. NGINX forwards these requests to the origin server without trying to satisfy them from the cache:

In the following extract from the origin server’s access log, the entries with status code 206 confirm that the origin server is serving byte-range requests during the time it takes for the cache fill operation to complete. (We used the log_format directive to include the Range request header in log entries, to identify which requests were modified and which were not.)

The final line, with the status code 200, corresponds to the completion of the first byte-range request. NGINX modified this to a request for the entire file and triggered a cache fill operation.

When we repeat the test after the entire file is cached, NGINX serves any further byte-range requests from the cache:

Using a cache lock optimizes the cache-fill operation, but at the cost of sending all subsequent user traffic to the origin server during the cache-fill period.

The Cache Slice module, introduced in NGINX Plus R8 and NGINX 1.9.8, offers an alternative method for filling the cache, which is more efficient when bandwidth is heavily constrained and cache-fill operations take a long time.

Using the cache-slice method, NGINX breaks the file into smaller segments and requests each segment when it is required. The segments are accumulated in the cache, and requests for the resource are satisfied by delivering appropriate parts of one or more segments to the client. A request for a large byte range (or indeed, the entire file) triggers subrequests for each of the required segments, which are cached as they arrive from the origin server. As soon as all the segments are cached, NGINX assembles the response from them and sends it to the client. 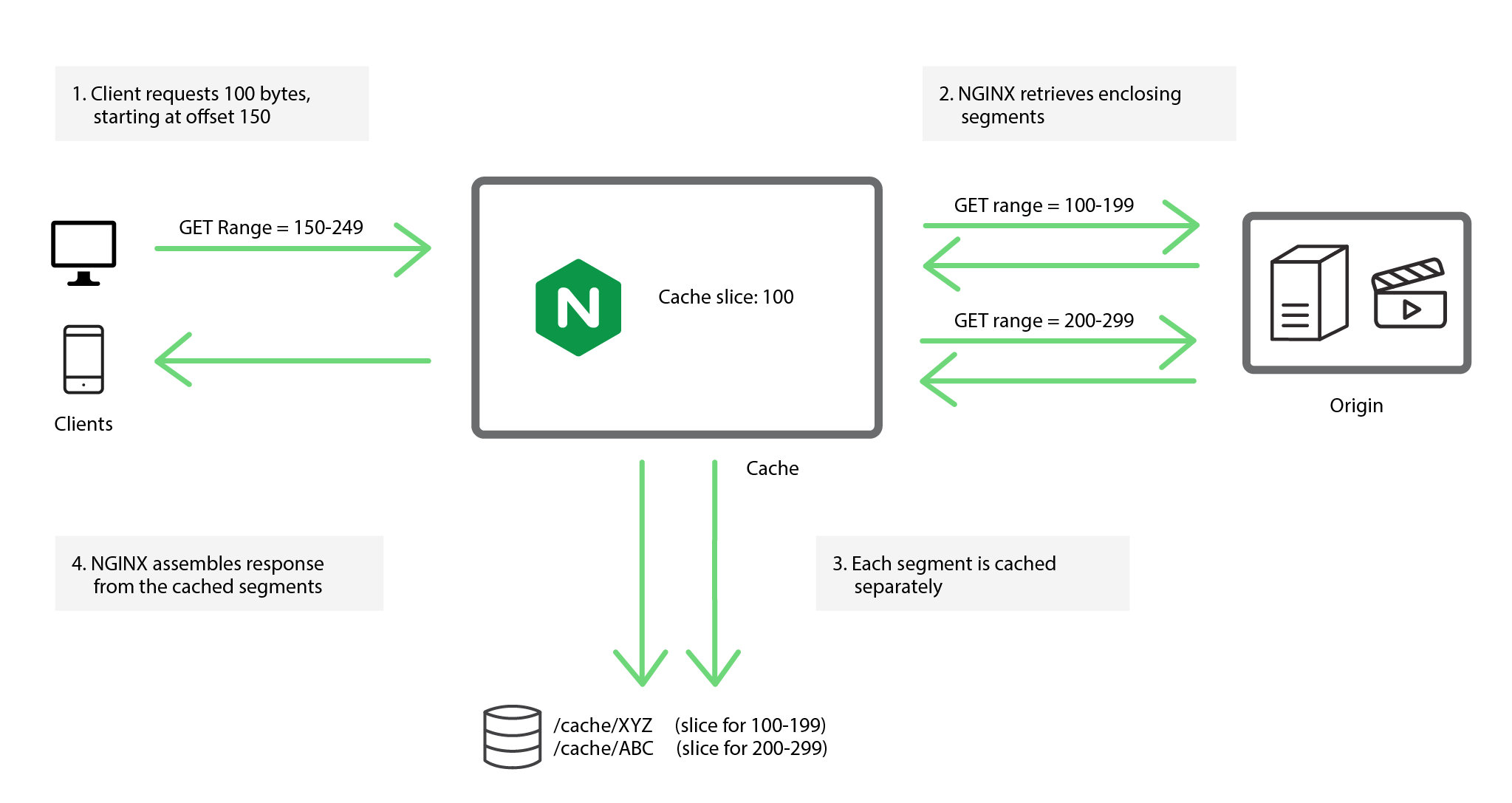 In the following configuration snippet, the slice directive (introduced in NGINX Plus R8 and NGINX 1.9.8) tells NGINX to segment each file into 1 MB fragments.

When using the slice directive, we must also add the $slice_range variable to the proxy_cache_key directive in order to differentiate between the fragments of the file, and we must replace the Range header in the request so that NGINX requests the appropriate byte-ranges from the origin server. We upgrade the request to HTTP/1.1 because HTTP/1.0 does not support byte-range requests.

As before, we request the middle byte range in 10Mb.txt:

If a byte-range request spans several segments, NGINX requests all of the required segments (that are not already cached) and then assembles the byte-range response from the cached segments.

The Cache Slice module was developed for delivery of HTML5 video, which uses byte-range requests to pseudo stream content to the browser. It’s ideal for video resources where the initial cache fill operation might take several minutes because bandwidth is constrained, and the file does not change after publication.

Set the slice size to a value small enough that each segment can be transferred quickly (for example, within a second or two). This will reduce the likelihood the multiple requests will trigger the continuous updating behavior described above.

On the other hand, it’s possible to make the slice size too small. If a request for the entire file triggers thousands of small requests at the same time, the overhead can be high, resulting in excessive memory and file descriptor usage and more disk activity.

In addition, because the Cache Slice module splits resources into independent segments, it’s not possible to change the resource once it has been cached. The module verifies the resource’s ETag header each time it receives a segment from the origin, and if the ETag changes, NGINX aborts the transaction because the underlying cached version is now corrupt. We recommend that you use cache slicing only for large files that do not change once published, such as video files.

Use the cache-lock technique if cache-fill operations can be performed quickly, and you can accept a spike of traffic to the origin server while the fill is in progress.

Use the new cache-slice technique if cache-fill operations are very slow and the content is stable (does not change).

Whichever method is appropriate for you, the NGINX team is here to help you build the perfect caching edge network or CDN for your content.

Want to check out NGINX Plus’ caching techniques for yourself? Take advantage of our free 30-day trial or contact us for a live demo!