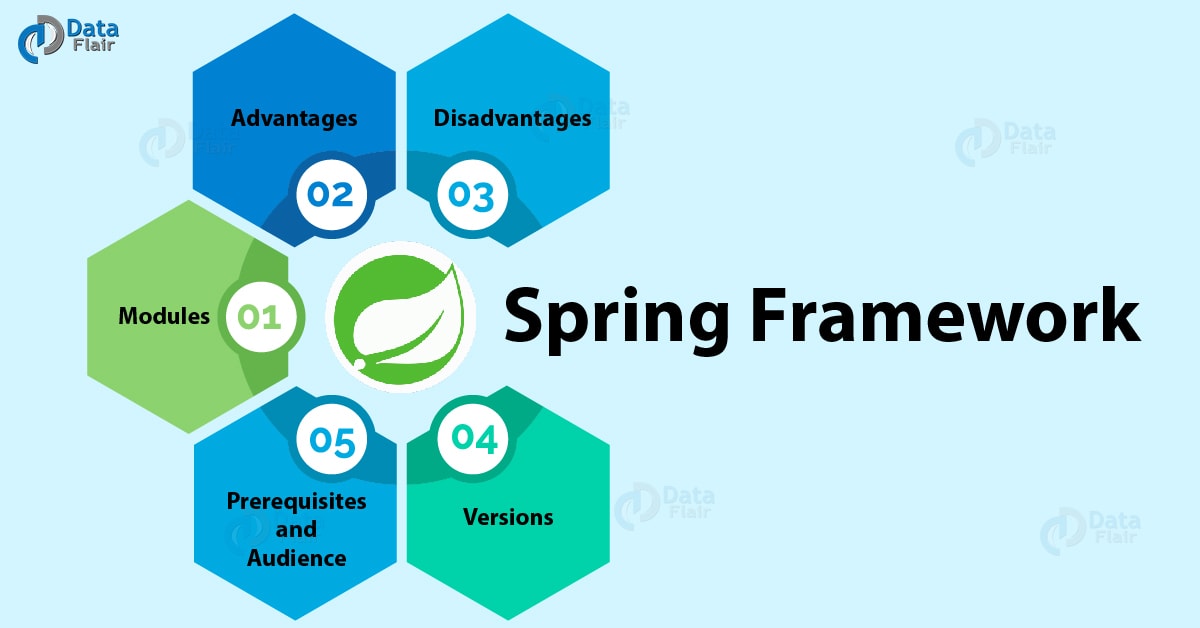 What Is the Spring Framework?

Do You Know Why the Spring Framework Is Popular?

Spring is modular in nature, which means that you can use the parts that you need instead of using the whole of it. Using the Spring Framework, you can build Java applications as well as other kinds of web applications (by using extensions).

The above diagram is about the Spring Framework.

This Spring Framework analysis is for Java programmers that need to understand and work with the Spring Framework. Before starting with Spring, one should have good knowledge of Java and should be comfortable in writing Java code. Also, the basic working and understanding of Eclipse or Java Netbeans should be familiar, as well.

Since the introduction of the Spring Framework in 2003 by Rod Johnson. There are several developments that have taken place in the framework. In June 2003, Spring was released under the Apache2.0 license. The first milestone release 1.0 was in March 2004 with further milestones releases in September 2004 and March 2005.

The 4.2.1 version focuses on core refinements and the latest web capabilities. The latest version 4.3 was released in June 2016, which will be supported until 2020, and will be in the final generation of the fourth version. The fifth version is said to be built upon Reactive Streams.

The below diagram will tell the important dates and milestones that were achieved during the development of the Spring Framework since its launch in 2003. 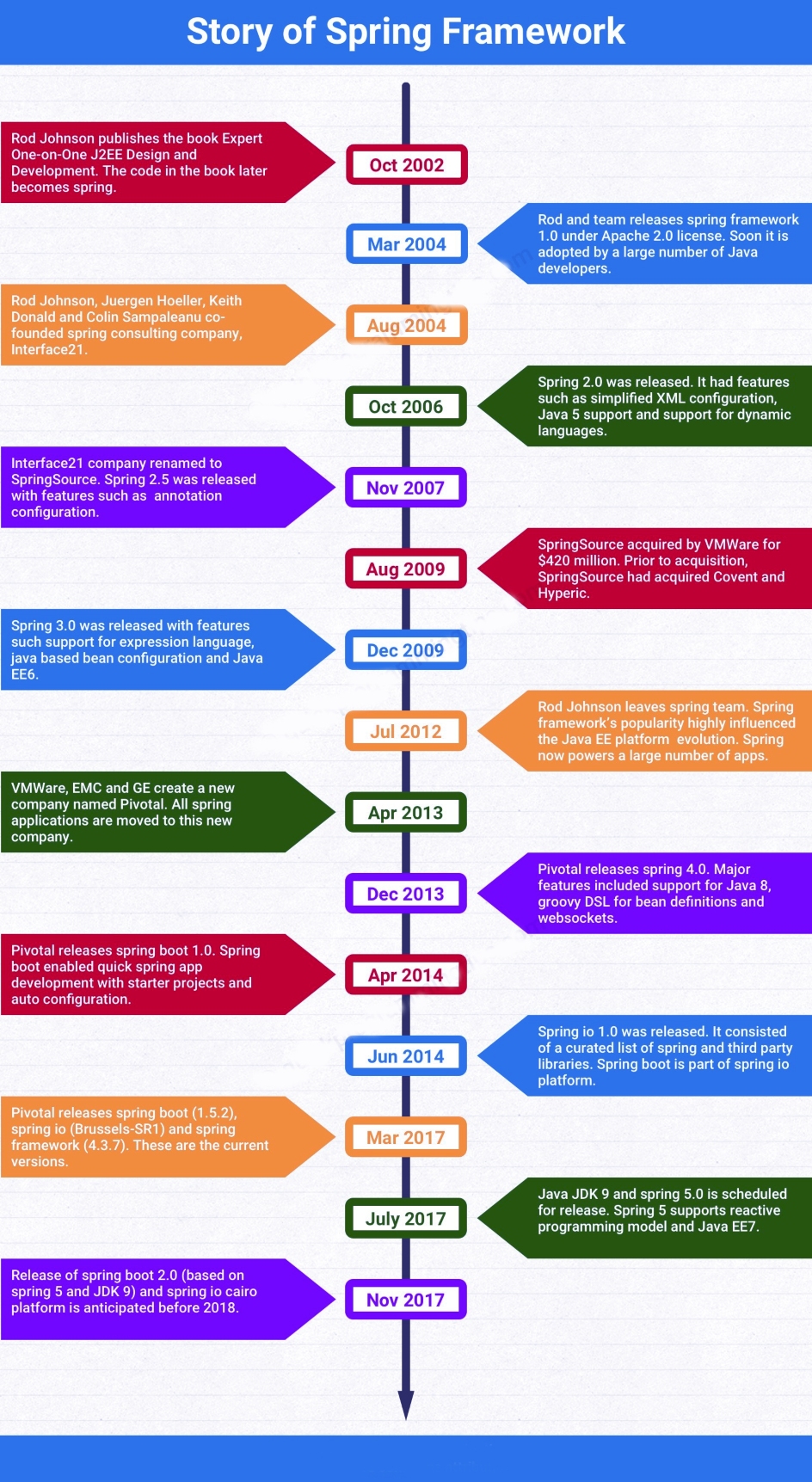 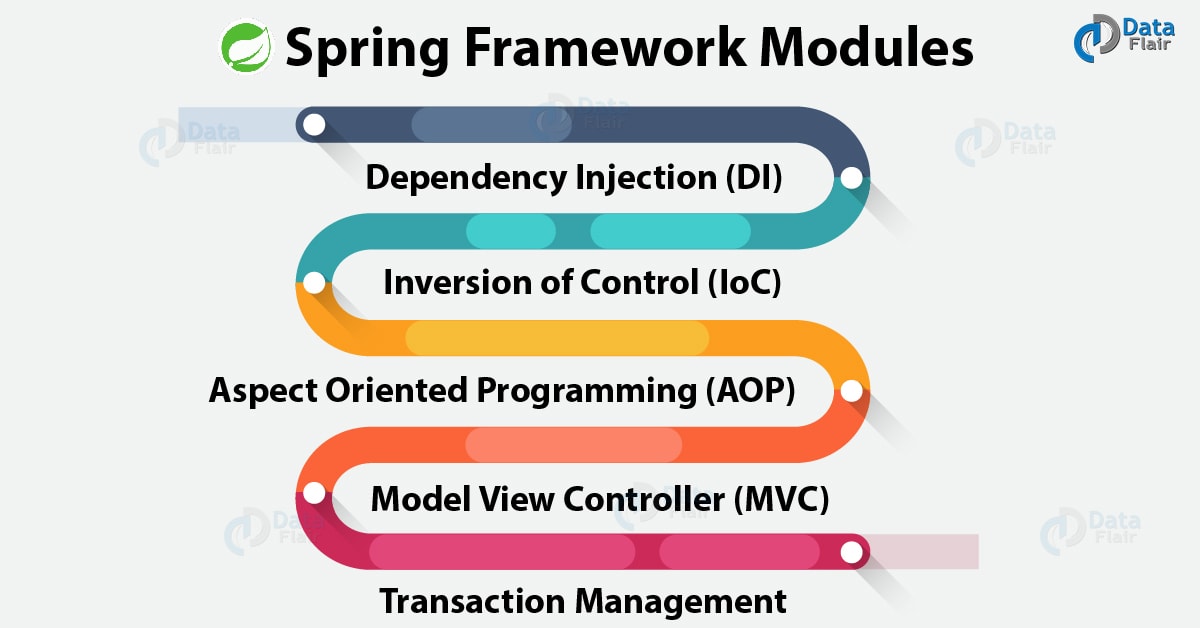 Dependency Injection and Inversion of Control

These are design patterns used to discard dependencies from the code, which makes the code easy to maintain and test. Consider the following example code:

The IoC makes the code loosely coupled. The above-used example can be redone as follows:

Aspect Oriented Programming(AOP) is the important part of the Spring Framework. The Aspect-Oriented Programming used for separating cross-cutting concerns (for example logging, security etc.) from the business logic of the application.

It an HTTP and servlet-based framework, this provides customization for web applications.

TM is used to unify several transaction management APIs and to coordinate transactions for Java objects.

Advantages and Disadvantages of Spring

Next, we are going to explore the limitations/benefits of the Spring Framework.

Advantages of the Spring Framework

Let's take a look at some of the benefits of the Spring Framework:

These are some limitations of the Spring Framework, let’s discuss them:

Published at DZone with permission of Shailna Patidar. See the original article here.