WinDocks is an independent port of Docker’s open source solution to Windows. Released in April 2016, WinDocks is popular for support of SQL Server Development and Test environments. The WinDocks 2.0 release this past month added database virtualization and is usable on any infrastructure or public cloud.

Cloning enables delivery of writable, terabyte-class databases in 30 seconds while using only 40 MB of storage. Let’s take a look at the technology and how it’s being used. (In the interest of full disclosure, I am a principal at WinDocks.)

A “clone” is a byte copy replica of the original. In this article, clones are based on Virtual Hard Disks, which support writable databases that are provisioned in seconds, and require only a fraction of the storage of the original. WinDocks cloning is based on the Windows Storage Management API. While Hyper-V is not supported on AWS, Windows Virtual Disks run wherever Windows Server 2012 and 2016 are supported. A writable 1 terabyte database can be cloned and delivered in just 30 seconds and, as mentioned, requires only 40 MB of storage!

The process begins with a snapshot or backup that is restored to a VHD. The VHD becomes a full byte copy of the source database, and takes the normal time needed for the database backup to be restored. Once created, the VHD supports the creation of “clones” in the form of a Windows “differencing disks.” Each differencing disk includes pointers to the full byte copy image (the VHD parent) and captures any changes made. Clones are created in seconds and can be delivered mounted to a SQL Server container or used with existing SQL Server instances.

WinDocks builds the VHD with a Dockerfile using a command SETUPCLONING FULL (similar commands support the use of Differential backups or database files). WinDocks creates the VHD, the associated mount point, restores the database(s) to the VHD, and associates the VHD with a new Image. The VHD and associated backups can be located on the WinDocks host or a network attached file share. The Dockerfile below illustrates the use of multiple databases, with a data masking script applied to one.

The image is built with a standard Docker build step, with an assigned image name of “clone.”

On completion, the image is available to create containers with the cloned database environment.   The standard Docker CLI is shown, with the return string including the containerid, port, and optional SQL as credentials.

The web UI is pointed to the IP address of the WinDocks host, a local host loopback address in this example. Images are listed followed by containers. A single click on the “create” button delivers a new container with cloned databases. 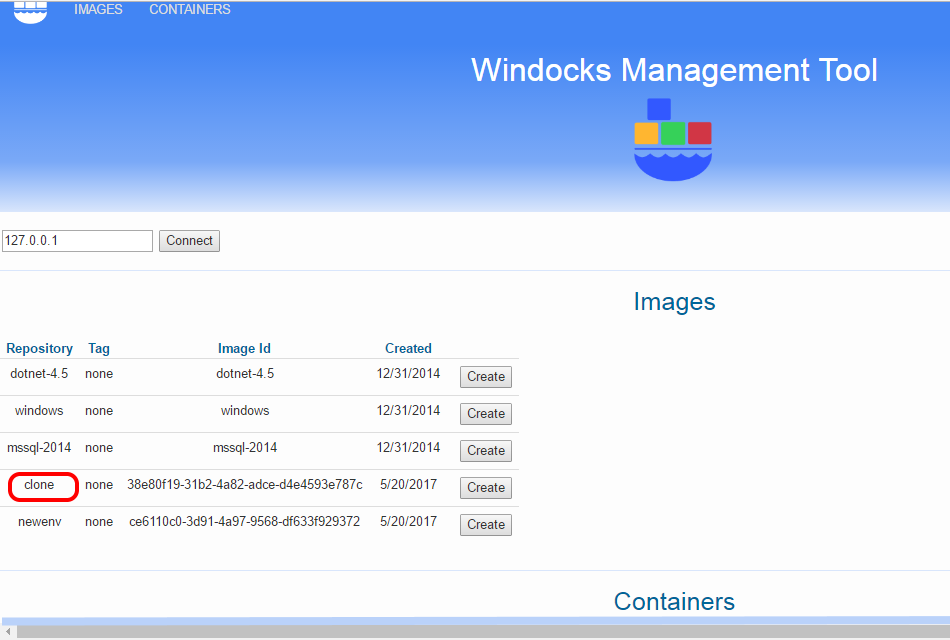 Clones are well suited for most Development and Test uses. Where performance is critical, it is recommended that clones be accessed with high performance or dedicated LANs, but many teams are finding clones accessed over the Internet work well, too. This combination is particularly popular for teams that work on production database environments, and with more production workloads running on AWS, the use of clones is growing.

The advantages delivered with clones are many:

Explore the use of SQL Server Clones on AWS

Try it out by downloading a free Community Edition of WinDocks, available here.