Spock is a testing and specification framework for Java and Groovy applications. Spock is:

Sounds interesting? Well, you can start playing with Spock very quickly by paying a quick visit to the Spock web console. When you have a little test you like, you can publish it like I did for this little Hello World test. 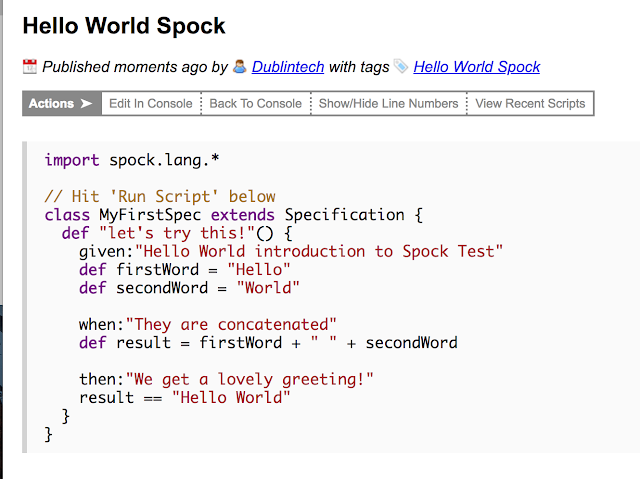 This Hello World test serves as a gentle introduction to some of the features of Spock.

Firstly, Spock tests are written in Groovy. That means some boilerplate code that you have with Java goes away. There is:

So less boilerplate code what next? Well you know those really long test names you get with JUnit tests, well instead of having to call this test, helloWorldIntroductionToSpockTest() which is difficult to read, you can just use a String with spaces as you normally do when you speak and name the test: Hello World introduction to Spock test.

This makes things much more readable.

Thirdly, the Given: When: Then: syntax, enforces test structure. No random asserts all over the test. They are in a designated place - inside the then: block and there only. More complex tests can use this structure to achieve BDD and ATDD.  This means, a BA, QA, anybody can read what your test is doing.

Fourthly, if I were to make a small change to the test and change the assertion to also include Tony, the test will of course fail. But when I get a failure in Spock, I get the full context of the expression that is tested. I see the value of everything in the expression. This makes it much quicker to diagnose problems when tests fail. 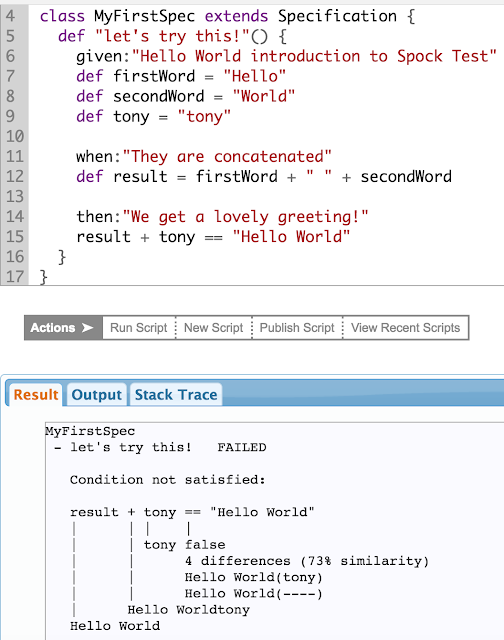 Not bad for an introduction. Let's now have a look at more features.

Mocking and Stubbing are much more powerful than what is possible with JUnit (and various add-ons). But it is not only super powerful in Spock, it is also very terse, keeping your test code very neat and easy to read.

Suppose we want to Stub a class called PaymentCalculator in our test, more specifically one of its methods, calculate(Product product, Integer count). In the stubbed version we want to return the count multiplied by 10 irrespective of the value of a product. In Spock, we achieve this by:

If you haven't realized how short and neat this is, well then get yourself a coffee. If you have realized that you can still have a coffee and keep reading, consider these points:

The best way to explain this is by example.

In this parameterized test, we see the following:

Again, this makes it much quicker to narrow in on bugs. Is the test wrong or is the code wrong? That becomes a question that can be answered faster. In this case, of course, it is the test that is wrong.

All the Benefits of Groovy

What else? Well, another major benefit is all the benefits of Groovy. For example, if you are testing an API that returns JSON or XML, Groovy is brilliant for parsing XML and JSON. Suppose we have an API that returns information about sports players in XML format. The format varies, but only slightly, depending on the sport they play:

We want to just invoke this API and then parse out the players irrespective of the sport. We can parse this polymorphically very simply in Groovy.

Suppose we want to check the players' names. Well, in this case, we don't care about order, so it makes more sense to convert the list to a Set and then check. Simple.

This will convert both lists to a Set, which means order checking is gone and it is just a Set comparison. There's a ton more Groovy features we can take advantage of, but the beauty is, we don't actually have to.

All Java code is also valid in a Groovy class. The same hold trues for Spock. This means there is no steep learning curve for anyone from a Java background. They can code pure Java and then get some Groovy tips from code reviews, etc.

Spock also has a range of powerful annotations for your tests. Again, we see the power of Groovy here as we can pass a closure to these annotations. For example:

Or just make your test fail if they take too long to execute:

So in summary, Spock versus vanilla JUnit has the following advantages:

And one of the often forgotten points is that your project doesn't have to be written in Groovy. You can keep it all in Java and leverage the static typing of Java for your production code and use the power and speed of Groovy for your test code.