This is part of a series of articles about database-as-code (GitOps):

The idea of codifying database schema changes (aka schema migration) is not new. Many engineering teams have employed Liquibase/Flyway to adopt this practice. At the same time, we are observing an accelerated trend of embracing database as code (DaC) across the industry. Several innovative products have also emerged to challenge the incumbents.

In this blog, we will review the state-of-the-art in the database as code landscape and share our own insight into the current and future trends in this space. 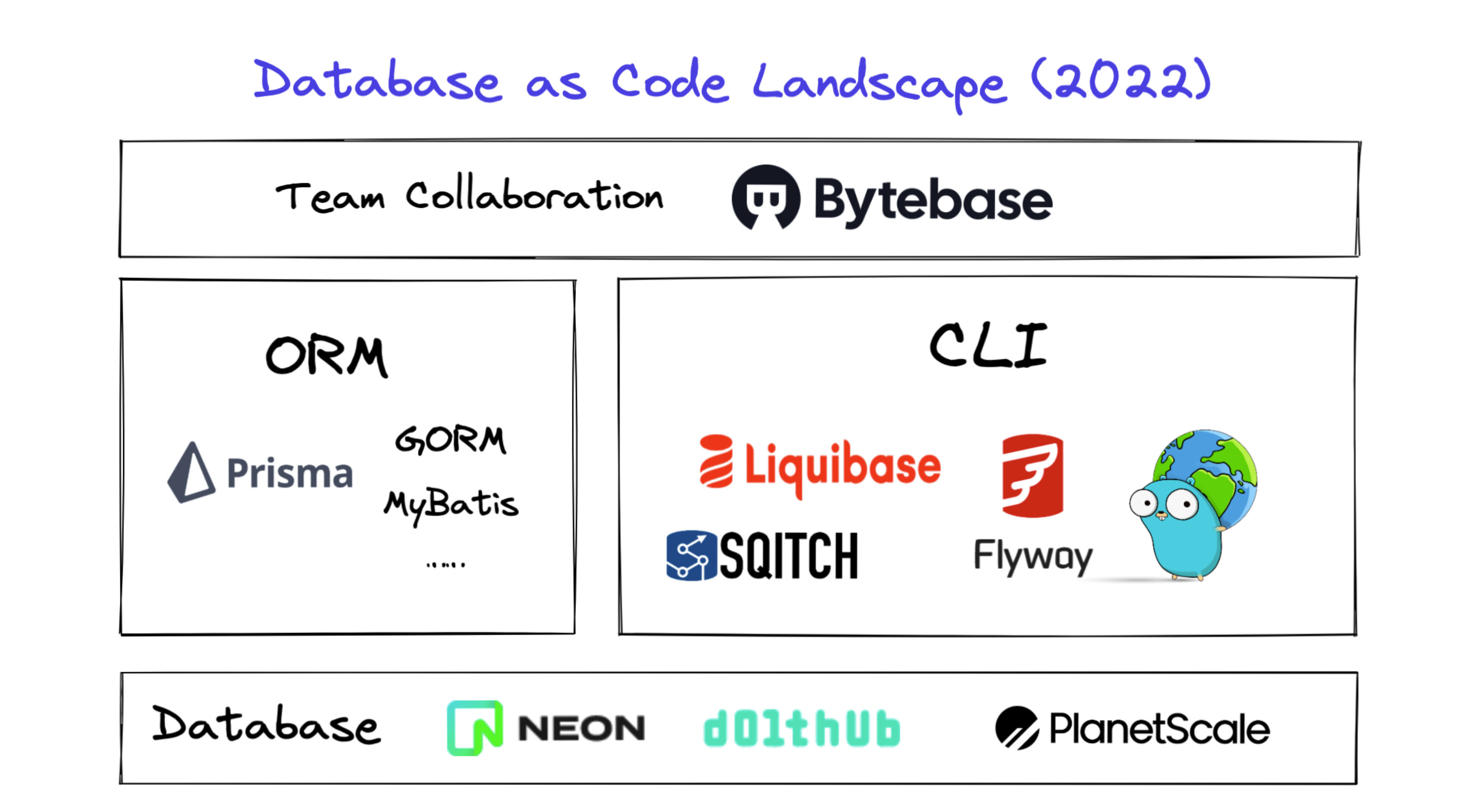 Started in 2006, Liquibase is arguably the most well-known product in this segment. When someone asks for database schema change advice on a forum, oftentimes, you will see a reply mentioning Liquibase.

Liquibase is both an open source project as well as a company providing its commercial offering. The company used to be called Datical, and was renamed Liquibase to consolidate the branding (wise move). Liquibase main product is a Java-based CLI. Via the CLI, developer teams can integrate the database schema migration into their CI/CD workflow. For the Java application, Liquibase can also be used as a library. Applications usually embed Liquibase library to apply any applicable schema migration on startup.

In Liquibase, a schema migration unit is encapsulated in a Change Set. Probably due to its age and root in Java, the most commonly used form is XML (YAML and JSON support have been added later): 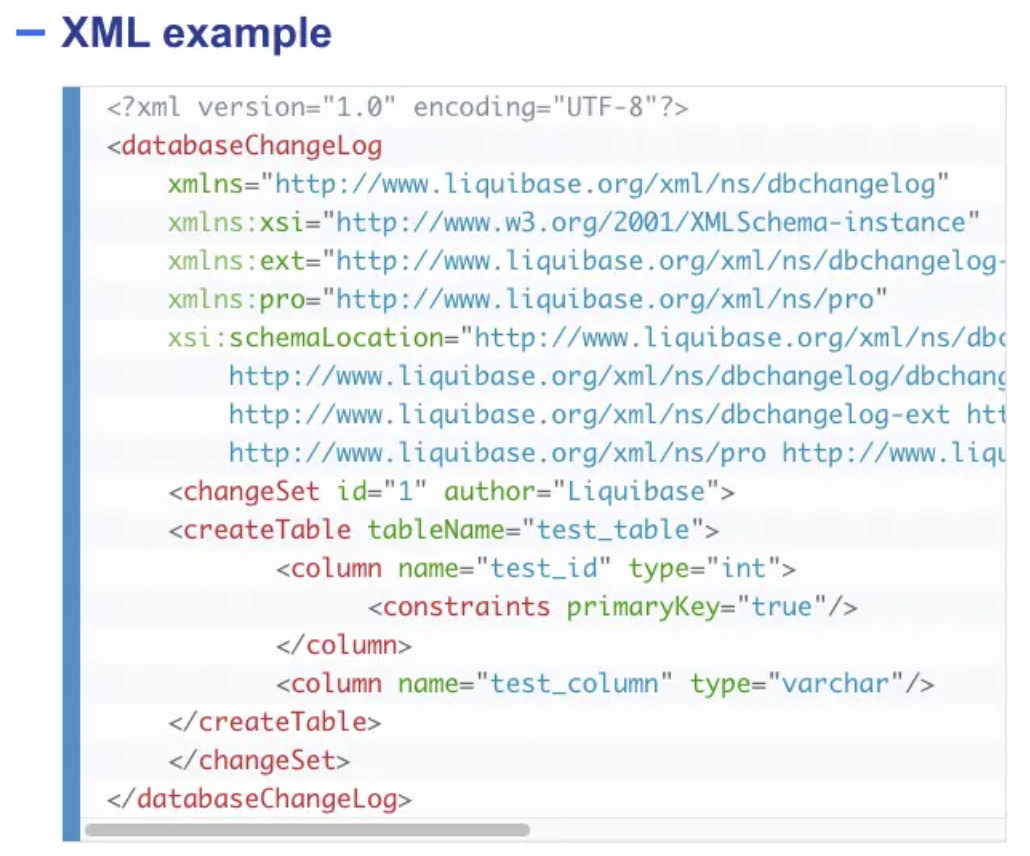 Liquibase is migration-based. It records the incremental change instead of the desired end state of the target database schema.

Flyway resembles Liquibase in many ways. It's an open source project with a long history and a large customer base. Its core product includes the CLI and a Java library. Flyway also recently announced a web portal named Hub.

The commercial entity behind Flyway is Redgate through an acquisition. The branding may cause some confusion, while it also sets a boundary between the open source and commercial offering. Flyway carries a more casual branding tone: 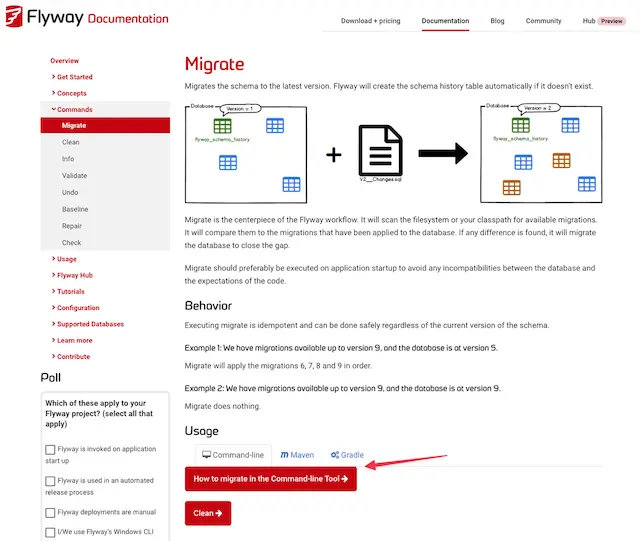 Flyway website is not as shining as those new dev tools companies using sophisticated gradients. You can even spot some basic UI spacing issues. Yet Flyway shows a classic example that content matters more than cosmetic beauty and its documentation stands out because of the clarity.

Liquibase and Flyway are neck and neck. The major difference lies in their respective positioning. Liquibase caters to enterprise customers, while Flyway feels more accessible to the developers.

Sqitch is also an open source project been on the market for a while. Sqitch is pure CLI-based and has no UI. Unlike Java-based Liquibase/Flyway, Sqitch is developed in Perl.

Choosing Perl is not the only interesting aspect. Sqitch has its own design philosophy about how to manage database schema changes. Both Liquibase and Flyway use the file naming convention to control the schema migration behavior (convention over configuration):

While Sqitch takes an explicit approach. In the below example, you need to name the schema migration as appschema:

If you want to apply another migration later, depending on appschema, you need to supply with --requires:

Sqitch also provides the unique tag and bundle command for the schema change deployment, which grants teams more power to wire the schema deployment into the application development lifecycle.

Altas current focus is on CLI. While stacking it against existing CLI tools like Liquibase/Flyway, it has the advantage of employing a modern programming language (Go instead of Java), and learnings from tools like Terraform and Prisma.

Though database schema migration falls into the back-end category, the most recent innovation comes from Prisma, an ORM with a front-end root.

To a typical front-end engineer wanting to build a sustainable full-stack application, TypeScript/Express.js is solving the code problem. NoSQL databases like MongoDB are solving the data problem. Prisma is targeting the last problem of wiring code with data.

For front-end engineers, usability and accessibility are especially important. They are used to perfect pixels and HCI, and are not versed in composing SQL. To lower the barrier of managing database schemas, Prisma specifically designs a DSL:

The DSL takes the state-based approach (declarative), in that the DSL describes the desired end state of the targeting database schema instead of the incremental changes. This is different from Liquibase/Flyway/Sqitch.

Prisma also invests heavily in the integration and development workflow.

Unlike its backend ORM peers, Prisma takes a refreshing approach and offers a more holistic view of managing database data and schema throughout the application development lifecycle. 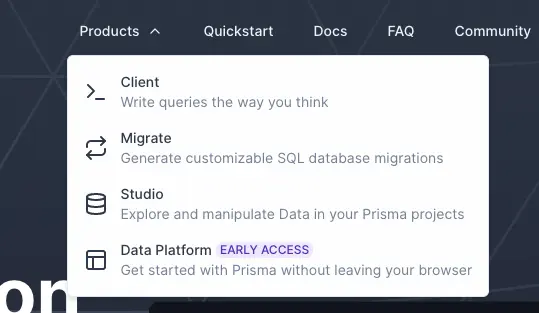 By looking at their product line, you can easily tell their ambitions are definitely not limited to being an ORM and schema migration tool.

PlanetScale used to be a Vitess hosted service. They pivoted last year to focus on the developer workflow. Though you may still come across some Vitess footprint on their website, most new materials are talking about database development workflow features such as branching, online schema change, and the recently introduced rewind: 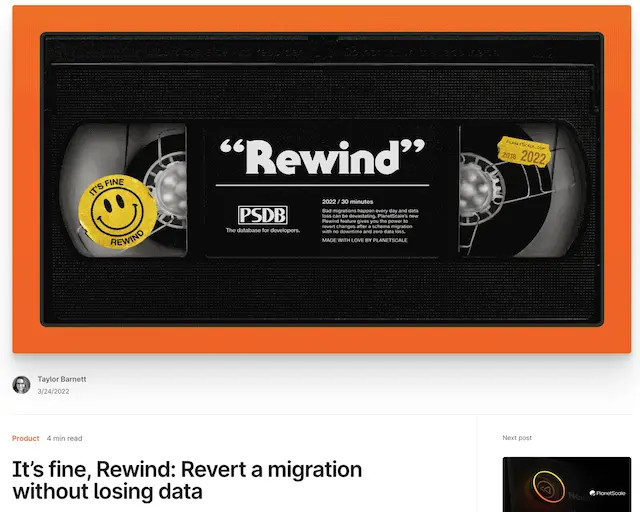 When we covered Prisma above, we mentioned there are three pillars constituting a full-stack application:

For the data part, MongoDB is a popular choice. People choose it because of its usability rather than ubiquity. For hosting mission-critical application data such as user info, customer order, and billing, you still want a SQL-based relational database. PlanetScale is based on MySQL, enhanced with Vitess scalability, and crafted for usability by the amazing PlanetScale product team. These properties make PlanetScale an attractive choice. It seems to combine the best of both worlds, retaining all the SQL database benefits while not sacrificing developer experience.

At a high level, it shares a lot of similarities with PlanetScale: serverless, developer productivity, fully managed.

The major difference lies in the technology stack:

Neon could have higher potential because it has better control over the entire stack. It would be very interesting to see how Neon progresses compared to PlanetScale. The love-hate relationship between MySQL and PostgreSQL is never-ending, from vanilla MySQL vs. PostgreSQL, distributed database TiDB vs. CockroachDB, cloud database AWS Aurora vs. GCP AlloyDB, and now to the developer-centric database PlanetScale vs. Neon.

Dolt is unique on its own. The website describes it as a database system with Git-like version control.

Dolt is drastically different from other database systems because it builds an engine with built-in Git semantics. This is a double-edged sword. On one hand, it brings those desired Git properties, and on the other hand, it imposes challenges of optimizing the typical OLTP workload. 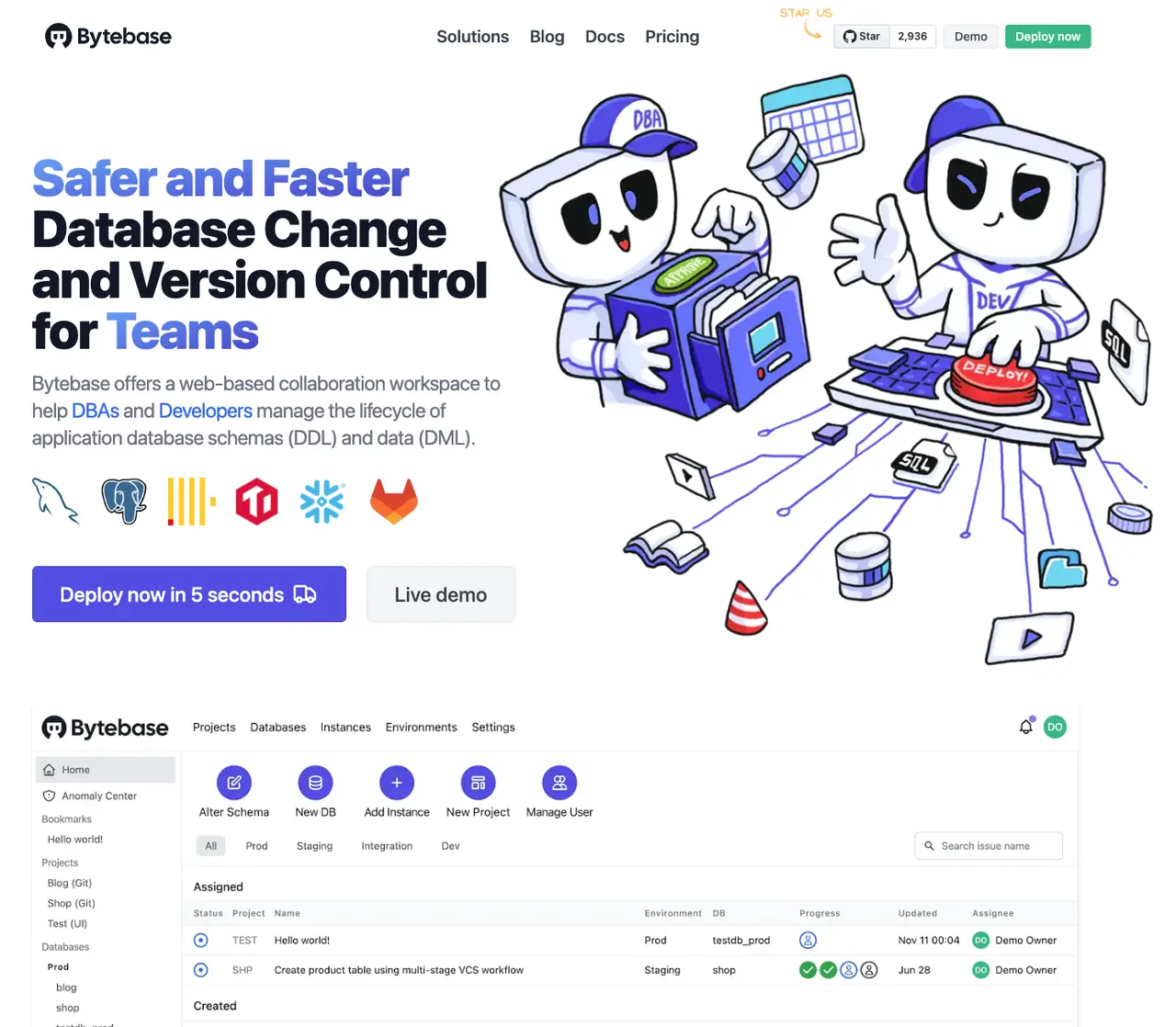 Bytebase is an open-source project that started in January 2021. It also shares some traits with the aforementioned products: 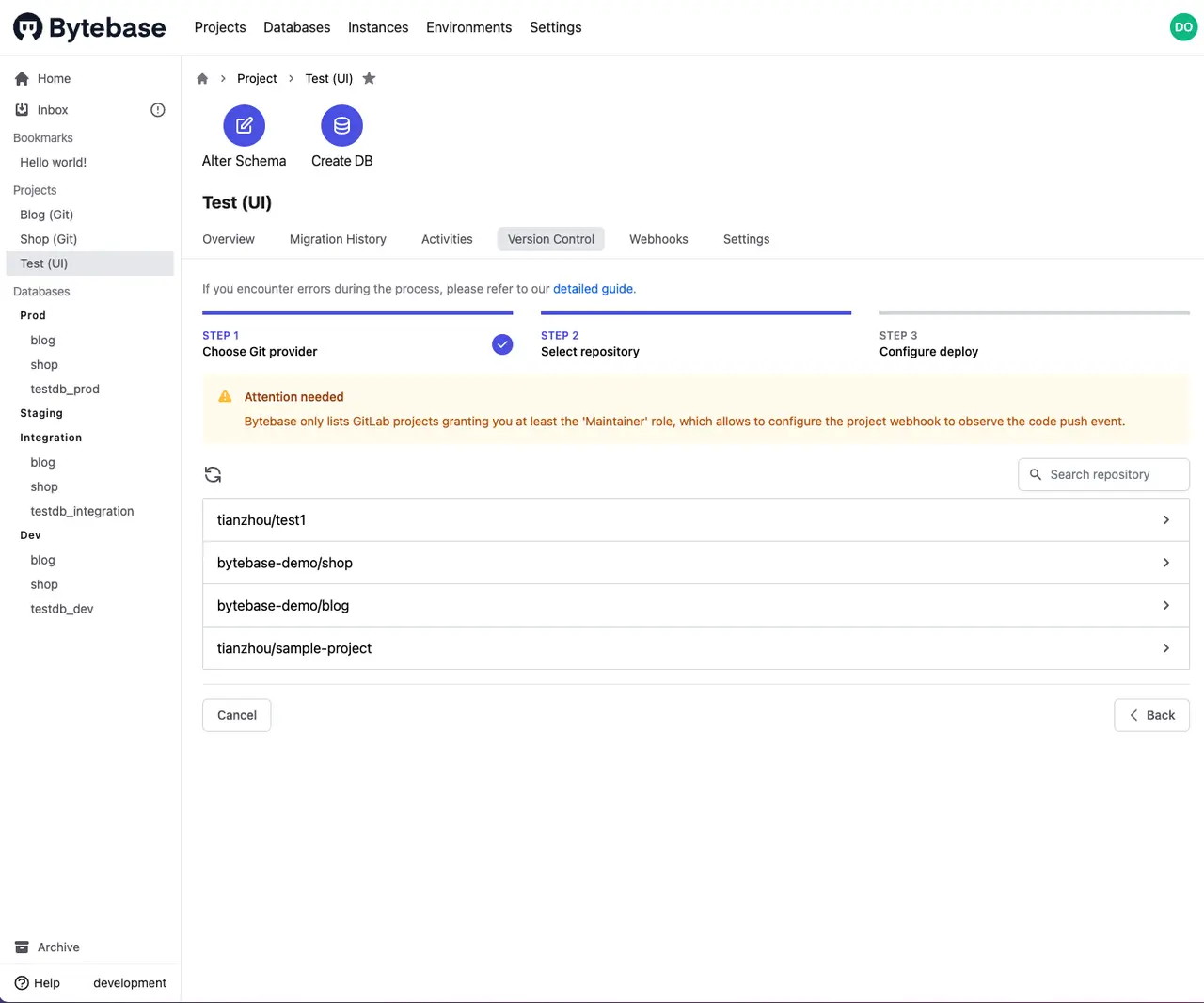 Bytebase is a jack-of-all-trades and has team collaboration features:

It also has the concepts Tenant and Environment to manage database changes for multi-tenant applications spanning multiple environments.

Bytebase is envisioned to be the counterpart of GitLab/GitHub to manage the database development aspect. It's positioned as a database DevOps solution for team collaboration.

How Bytebase compares against other tools: 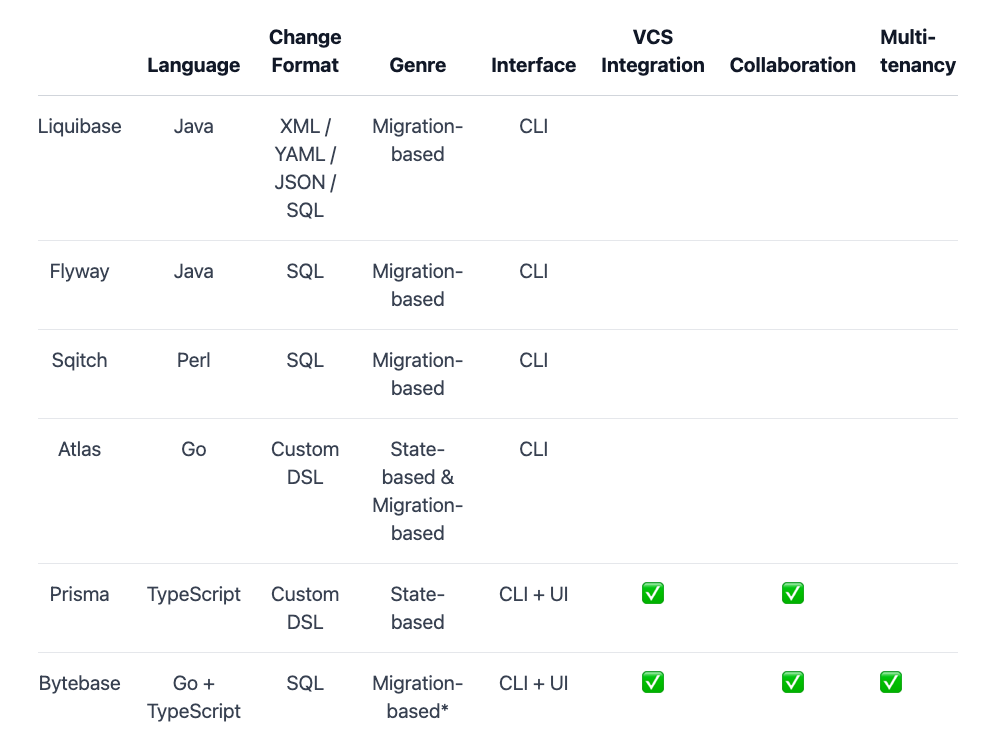 Though the idea of database as code is not new, the trend has accelerated in the last two years: 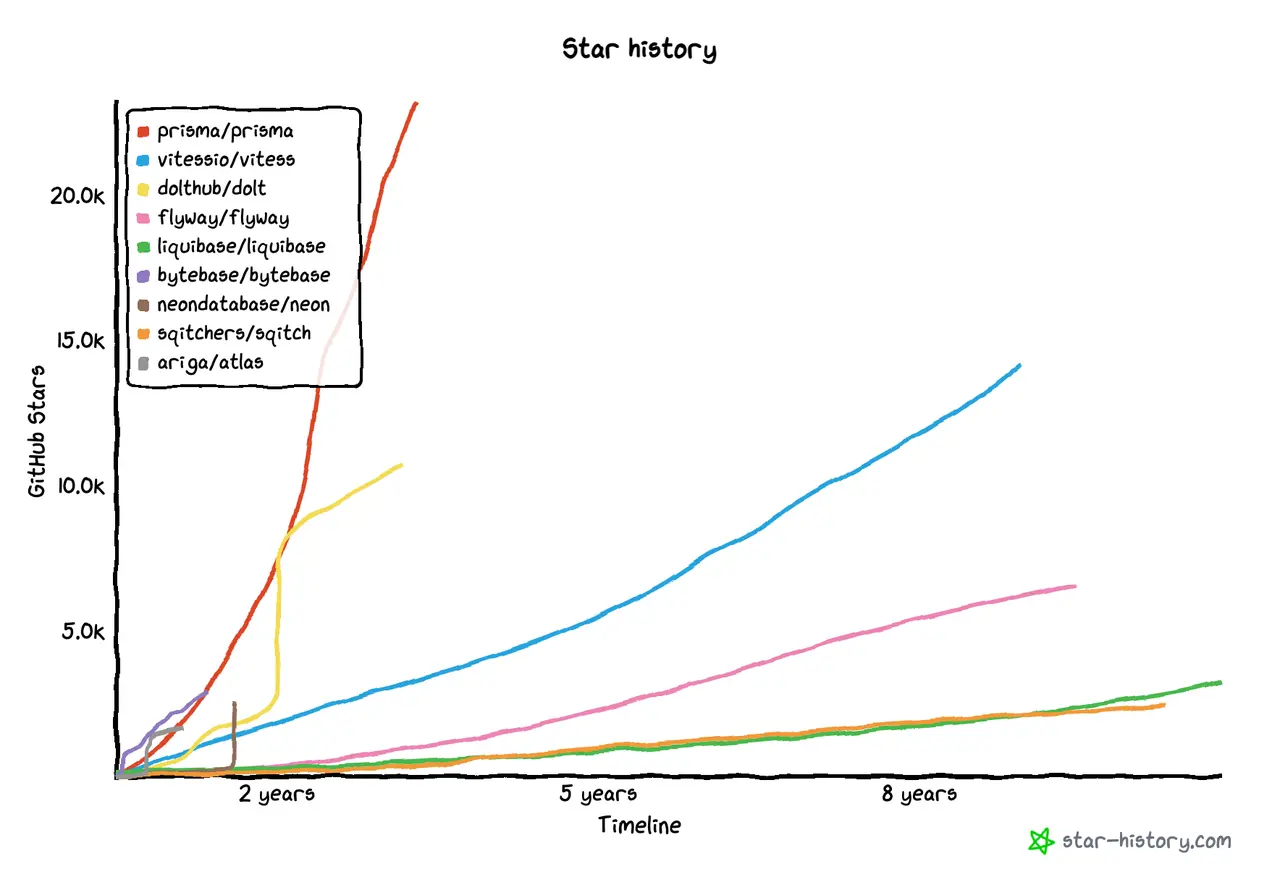 The iconic article "Evolutionary Database Design" was written in 2016. Though the phrase "database as code" was not coined there, that article summarized the accumulated wisdom of applying database as code practice in the decade before.

The power dynamics for managing database development have shifted over time, and the quest for better developer experience and efficient developer workflow is more demanding than ever.

It requires a delicate dance among the database systems, the database tools, and the industry mindset to conquer it. Database as code is the critical puzzle, and the timing couldn't be better to build in this space.

Published at DZone with permission of Tianzhou Chen. See the original article here.