In the past few decades, the QA testing world has witnessed great changes. Automated testing has evolved to accelerate speedy software releases at the highest quality.

Test automation has always been an eye-catching trend, as it lowers the effort required for testing. The automated test arena is gaining paramount significance in the QA world, and for good reasons. It has proven to be a smart game-changer by enhancing QA procedures and scaling up software development productivity. Besides, with concepts such as Scrum, DevOps, Agile, and continuous delivery, the QA test has reached wide adoption levels. Rapid growth in technologies and automation testing services led to the blending of automation and artificial intelligence, a concept referred to as intelligent automation.

The past year saw the inevitable effects of COVID-19, and everything started changing into a digital environment. The pandemic has harshly impacted software testing strategies, forcing QA experts to become more agile and to perform excess with less. Yet 2022 is not just an another year. A large number of companies have had to change to 100 percent digital, and the necessity for test automation has increased to a new level. More and more enterprises are acclimatizing themselves to new test automation strategies. The pressure to keep up with the most modern automation techniques and execute them is high.

Test automation has never been a stagnant category: continuous innovation, rapid growth, and broader acceptance is all baked in. But in the year 2022, the category will progress more rapidly and further than ever before.

At the time of the COVID-19 pandemic, the top vendors operating in the market are concentrating on automating IT operations to recuperate from the crisis. Firms started to invest more in cognitive capacities and AI (artificial intelligence) and robotic process automation (RPA) as companies start recovering post-COVID-19.

The pandemic has also made automation tied with testing a boardroom imperative as enterprises expand business stability plans and take new risks. For example, in May 2020, IBM Corporation had announced a broad series of new AI-centric solutions designed to help companies automate their infrastructures to be more flexible to upcoming disruptions and decrease the entire cost of ownership. 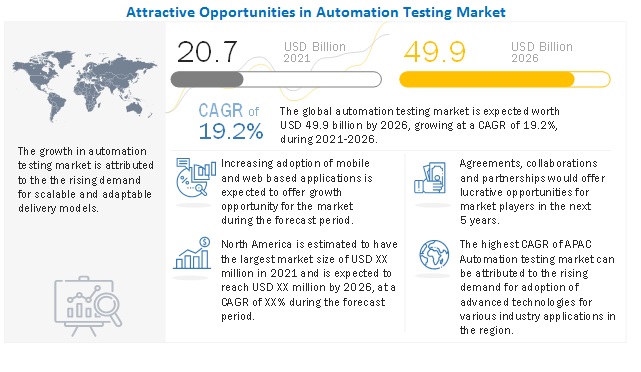 In this article, we would like to share seven key trends in test automation that are relevant in 2022.

Currently, one of the most prominent trends is the increase of JavaScript-based test tools, such as Cypress, Jest, Playwright, and Puppeteer. This is happening as much front-end web development is now carried out in JavaScript. And when writing code in JavaScript, it is easier to also test that code in JavaScript. Another factor is the tight integration between testing code and app code. One can perform things like writing component tests or unit tests in JavaScript. Then whenever you find test gaps that you cannot fulfill with either one of those strategies, you can use stuff like system testing with Cypress, for instance, which is yet another additional tool inside of your JavaScript repository.

This technique is facilitated by AI technology and visual modeling, enabling the forming of test cases with no coding background. Accordingly, the QA experts don’t need to put hardcore coding understanding into the test cases and test case scenarios. This codeless test automation will also help to minimize the runtime on recurring issues. This is one of the important trends to surface in 2022. Other features of this trend include:

It also assists in updating the active test case and eliminates the redundant test cases, making the procedure faster. AI and ML also help in predictive analysis, which enables them to identify potential faults that can hit the process. They allow enhanced error management and tracking. Complicated systems and rising user requirements create the need for sophisticated test apps. AI and ML are increasingly being used for this purpose. Such technologies will help to decrease the amount of errors and make them simpler to detect and correct.

•    Capacity to use AI to automatically mitigate errors and recognize areas to be tested.

•    Visual test: the capacity for testing the appearance of apps.

•    Capability to differentiate differences between the programs under testing.

With such increasing growth and clear benefits to integrating AI in software testing, the demand for this technology has been rising. For example, in April 2020, Applitools, a provider of visual AI-cantered automated testing, published an industry report stating the influence of visual AI on the performance of open-source QA testing frameworks such as WebdriverIO, Cypress, and Selenium. The end report revealed that the effects of visual AI on test automation show a 4.6x boost in test stability, 5.9x enhanced test code efficiency, and 5.8x more rapid authoring.

This is the reason why the market size of automated testing is globally influenced by a CAGR of 14%+ boost year over year, bringing the market value to USD $35 billion in the next few decades. Furthermore, the power of automation with the assistance of artificial intelligence introduces even more prospects for growth. Manual testing is no longer a real choice because of the number of variables that come into play and the time needed to execute comprehensive testing suites. 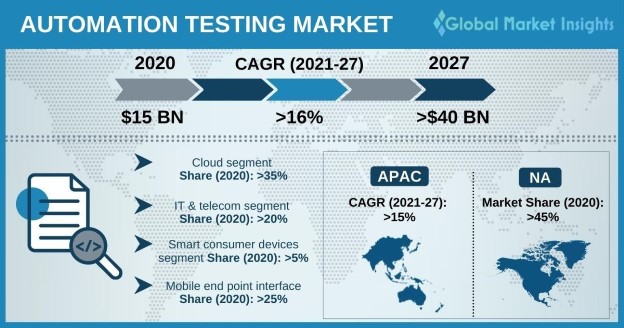 4. Increasing Adoption and Acceptance of RPA

Robotic process automation (RPA) adoption just keeps rising. According to Gartner, in 2020, robotic process automation was once again the fastest-growing section of the enterprise software market, notching a 38.9 percent growth to reach USD $1.9 billion in revenue. Expansion is being fueled not merely by wide adoption, but also adoption within the enterprise. For instance, as of September 2021, UiPath revealed a dollar-based net retention rate of 144 percent, meaning that the average consumer had spent 44 percent more with them over the preceding year. RPA leads in user interface automation — which is crucial for automating great processes. User interface automation is very hard to get right — which is why others have had to take part in catch-up.

Advanced RPA platforms integrate enterprise-critical functionalities such as governance, no-code/ low-code build environments, and support for scalability and “democratization.” RPA platforms will be able to natively handle a great range of use cases, expanding developers’ creativity — for example, enabling them to take on long-running procedures requiring richer UIs or higher-level artificial intelligence and machine learning projects. RPA platforms also focus on moving into the LCAP adjacency with newer tools and shortcuts to aid citizen developers to build apps and automation. You can expect them to invest in interoperability and simple integrations with different automation technologies. Enterprises can continue to use their newest and most modern technology — in short, an RPA platform provides governance and management.

RPA is a technology that also allows software bots to repeat human actions and carry out a task more efficiently. This technology is leveraged by approximately each industry, such as finance, banking, insurance, telecommunications, and healthcare. RPA has been helping automation testing company reduce time-to-market, achieve operational efficiency, and ensure great security. Therefore, the use of robotic process automation, which is the crucial component of intelligent automation, is projected to climb more in the coming decades.

5. Containerization and Cloud Native Turned Out to Be the Standard for Both Non-SaaS and SaaS Delivery

When it comes to selecting an automated platform, the market is demanding extra flexibility and less lock-in to a specific model. That, in turn, is compelling automation testing companies to design platforms that can be delivered from SaaS (software as a service) to on-premises with the least upheaval and disruption — and that enable low-friction transitions to the newest delivery modes. For several automated technology companies, that means accepting cloud-native architectures that leverage microservices and containerization.

These modern technologies enable them to deliver similar capabilities and functionalities irrespective of where or how the customer wishes to run their platform. Customers will not have to get hold of new skills or substantially alter their operating environments and procedures should they choose to transition to a different delivery mode in the future. And on-premises customers gain greater timeliness, flexibility, and ease in upgrading or expanding their installations.

Expect to see even more innovation in how platforms are developed and packaged. Innovations will focus on creating advantages like further reducing the effort and skills needed to install, handle, and upgrade platforms, and lessening the TCO (total cost of ownership) for each delivery mode.

Collaborative robots or cobots are the kinds of robots intended to interact with people in a shared workplace. From lifting heavy masses in warehouses to smartly eliminating obstacles from assembly lines, these cobots aid people in smart factories. These bots are greatly assisting small companies, as they don’t need big floor space and dedicated personnel to help program and manage them, unlike large robots. The majority of industries are rapidly adopting robots to automate repetitive tasks, address the lack of labor resources, maintain quality, and so on. In the upcoming decades, it is anticipated that the acceptance rate of robots will appreciably increase across industries.

The no-code/low code automation trend is swiftly gaining traction and is projected to grow more in the upcoming decades. No-code/low-code automation platforms are software programs that necessitate little to no coding understanding. They offer predesigned workflow templates and an accessible drag-and-drop interface to customize workflows that folks can use with no back-end computer programming knowledge. Such platforms are gaining extra attention because of various rewards to enterprises, like faster scalability and time to market, self-service capabilities, and so on.

The Future of Test Automation

Overall, test automation is the key to the creation of an effective test environment.

By leveraging advanced technologies (ML, AI, BPM, RPA, and so on) in cognitive automation, enterprises can ensure operational efficiency, process efficiency, save considerable cost and time, and deliver a better experience to employees and customers. To realize the advantages of automated testing, companies have to take full benefit of smarter tools, as per The World Quality Report 2020–2021.

In the upcoming decades, many experts and analysts predict a breakout of smart automation across major industries. It is believed that the adoption rate for high tech and intelligent automation will grow more as it is a way forward for companies seeking to accelerate their digital transformation and automation path to become autonomous enterprises.