When it comes to transactions, the first thing that comes to mind is ACID. Actually ACID is an important 4-point concept:

For better understanding, let's look at a real-world scenario.  This scenario is a regular microservice-based ordering system that contains the following microservices:

1- OrderService, which is responsible for registering a customer's order.

2- PaymentService, which is responsible for giving order money from a customer.

3- RestaurantService, which is responsible for customer order preparation.

4- DeliveryService, which puts orders in the delivery queue.

Suppose in this simple scenario, the customer registers a food order through the OrderService so that this microservice receives order information from the customer and stores it in its own database. The next step is the payment process, which is performed by PaymentSerivce. This microservice receives customers' card information and pays. If everything was correct and payment was made, the customer's order can be complete; but what happens if there is not enough money on the customer's card, or the payment gateway is cut off? We have an unsuccessful payment, but still a pending order in OrderService.  We would need to find a way to cancel that pending payment in OrderService database. To put it simply, we need a transaction between microservices.

A two-phase commit (2PC) is the most famous protocol of distributed transactions. In implementing this protocol, we assume that one process will function as the coordinator and the rest as cohorts (the coordinator may be the one that initiated the transaction, but that's not necessary). We further assume that there is stable storage and a write-ahead log at each site. Furthermore, we assume that no machine involved crashes forever. The protocol works as follows (the coordinator is ready to commit and needs to ensure that everyone else will do so as well):

Two-phase commit and similar protocols are not good options for transaction in microservice-based architecture for several reasons.  The most important reason is that one node is responsible for the coordination of transactions between other nodes. Obviously, there is a single point of failure, and if any problem occurred for the coordinator node, the whole transaction management system will be in trouble. The second important problem is that the transaction system response time depends on the slowest node's response time. In addition, the following can be mentioned as other problems of 2PC:

SAGA pattern was first introduced to the world in 1987 by Hector Garcia-Molina and  Kenneth Salem in an article named SAGAS. The idea behind it is quite simple and based on the sequence of transactions that can be interleaved with other transactions. Generally, microservice-based architectures consist of smaller services and each service has its own transaction. SAGA provides the mechanisms for interleaving these small transactions with each other. SAGA's architecture pattern manages general transactions using a sequence of local transactions. Each local transaction participates in SAGA as a single independent unit of work. The key point is that SAGA guarantees that either all operations are completed successfully or all participants should be rolled back to their local transaction. In regular and RDBMS-based systems, commit and rollback of transactions are done automatically. However, in SAGA, the situation is different and every unit of the SAGA ecosystem should manage, commit, and rollback by itself.  Actually, every microservice that has been involved in the SAGA ecosystem should expose two major services: first, a service that represents the main functionality that microservice wants to participate with; and second, the rollback service that reverses that first service change in the local database, which is called compensation service. For example, in the OrderService, the main service is CREATE ORDER, and the compensation service is CANCEL ORDER. Each SAGA-based transaction consists of n transaction and n compensation. This order system has been considered as a case study in this article. As you can see in the below picture, we have four microservices, so we have a four-compensation service in addition to four main transactions.

assumption 2: compensation service must be idempotent and can not abort, they must be retried until succussed.

In this approach, we have one coordinator component that can even be a participant microservice or an independent component. Indeed, an orchestrator (object) tells the participants what local transactions to execute. Suppose this scenario:

This approach, as you can guess, has a famous problem that we are all afraid of: Single Point of Failure. If the coordinator fails, all ecosystems will fail.

Unlike the previous approach, in this protocol, there is not a single point of failure. In choreography-based SAGA, each local transaction publishes domain events that trigger local transactions in other services.

The ideal implementation of SAGA is choreography-based protocol. This approach relies on message brokers and event handlers in order to achieve the desired result. The event handler that we have used is Apache Kafka. Apache Kafka is a distributed open-source streaming and event handling platform that is used by many companies as well as software architectures. Kafka was initially conceived as a messaging queue and is based on an abstraction of a distributed commit log. Since being created and open-sourced by LinkedIn in 2011, Kafka has quickly evolved from messaging queue to a full-fledged event streaming platform. The most important data structure in Kafka is topic. Simply put, topic can be considered as a queue of events which everybody in the role of consumer can listen to in order to notify of new events, or can put a new event in the topic as a producer.

Let's simulate or case study with choreography and aim of Kafka.

Simplifier assumption: In this part, we assume that we have only two microservices: OrderService and PaymentService.

Assumption: There is a customer Order object with three possible statuses: PENDING, PAID, or FAILED.

The main invariant of consistency in our case study is every time we have successful order, if and only if  =>sum(order.amount)<=  customer.credit, and you can not find any path in the system to violate it.

Saga Tends To Be ACD in Some Cases

For reasons as illustrated in the table below, we have a lack of Isolation in SAGA:

However, this is not the end of the game.  There are a variety of countermeasures for reducing the impact of isolation anomalies, such as:

In this part, we tend to represent a complete overview and implementation of OrderService. As you can see, we have four microservices: OrderService, PaymentService, RestaurantService, and DeliveryService. Each microservice triggers via the events that come from outside of it, so we have the following steps: 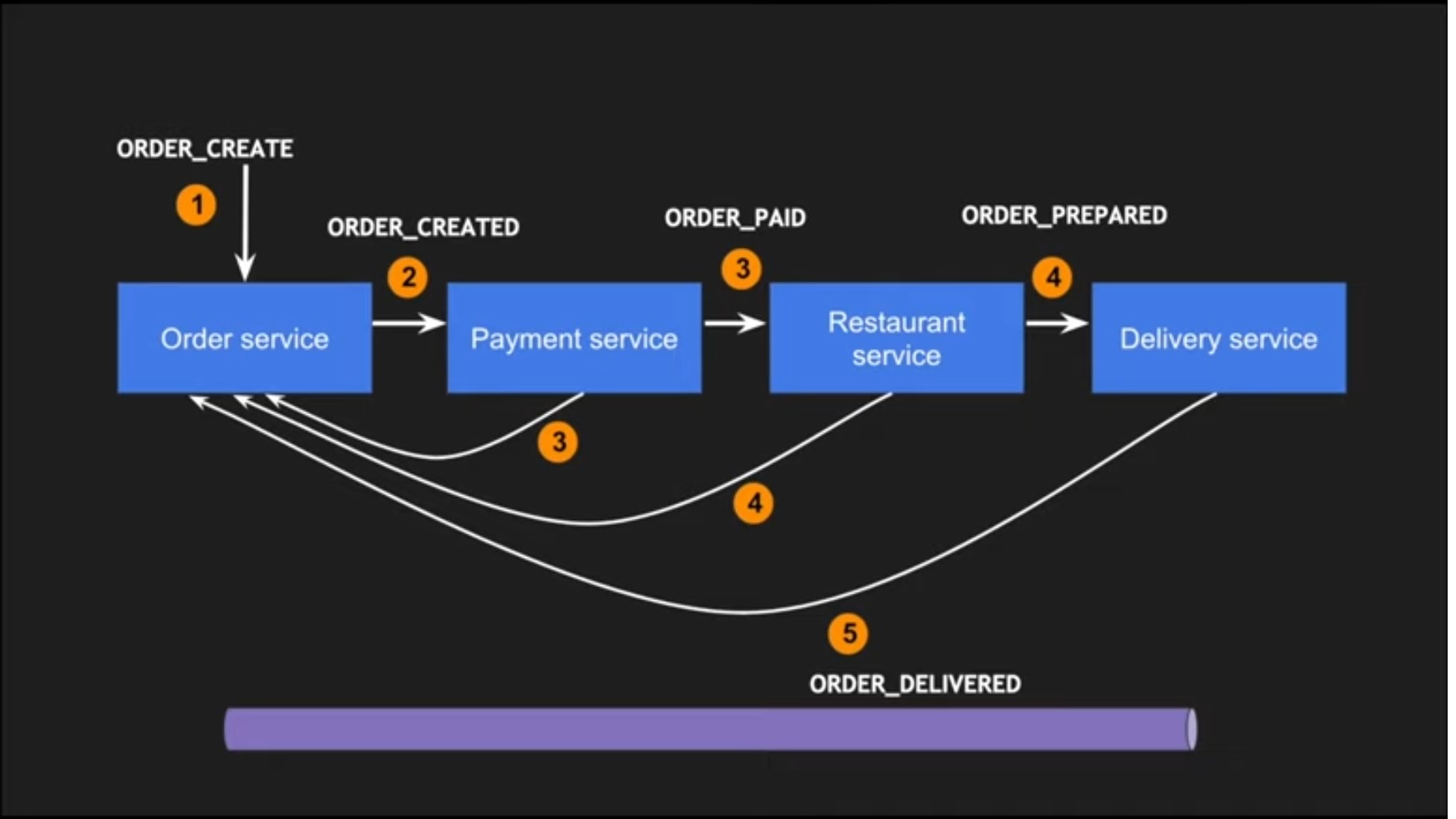 My practical implementation is based on Spring Boot and Spring Cloud frameworks, as well as Apache Kafka event handler. Every microservice exposed two APIs: main transaction and compensation transaction.

There are four Kafka topics: Pending_Orders, Success_Payment_Orders, Failed_Payment_Orders, and Deliverable_Orders.  For simplifying implementation, I considered just one compensation scenario, and that scenario is when payment is failed. I suppose that all scenarios after payment will definitely be executed.

All microservices involved in the case study has the following features:

In this microservice, we have as the first class order service microservice, which receives the order from the outside and puts in the appropriate topic:

The second class is the listener class, which listens to Failed_Payment_Orders for failed payment, reverses the order, and notifies the customer.

Finally, we have a rest class, which used to test our code with the following code:

This microservice just has one listener class that listens to Pending_Order and makes the right decision based on the result of payment.

There are two more microservices that you can find for all ecosystems projects. Refer to my GitHub.

Finally, you can see the sample execution result in the failed payment: