Turkcell is a converged telecommunications and technology services provider, founded and headquartered in Turkey where the telecommunication sector is considerably competitive. Turkcell wanted to create an Agile culture in a competitive environment with multiple outsourced vendors. Agile is challenging enough in smaller organizations; however Business Operations (BO), which is a large-scale organization in Turkcell, wanted to increase its productivity and customer satisfaction with Agile. Here’s how we succeeded with Agile transformation.

1. Occurrence of the Transformation Idea

There are five basic products and services such as smart devices, tariff packages, fixed and mobile convergence services, value added services, exclusive gift scenarios, and club memberships. In our Business Operations department, services, tariffs, and campaigns are set off including one or more of these products. Periods and prices of these products are determined by configurations to the system. BO is a multi-vendor organization. There are three different competencies which are analysis, configuration and deployment, and test. The last two competencies are outsourced to two different vendor companies.

There are distinct steps that are followed sequentially in BO, as seen in Figure 1.

Requests were created by the marketing teams as tickets. They were assigned to the analysts. After the analysis was completed, deployment started and then all the configurations were tested.

Before 2015, the Waterfall Model had been performed in BO. Cycle time (the time between the beginning of analysis and the launch time) and the lead time took too long and did not match the expectations of business teams. There were some underlying reasons, such as prioritization problems, pushing systems, working at different places, and lots of different teams running in parallel, that caused this inefficiency. 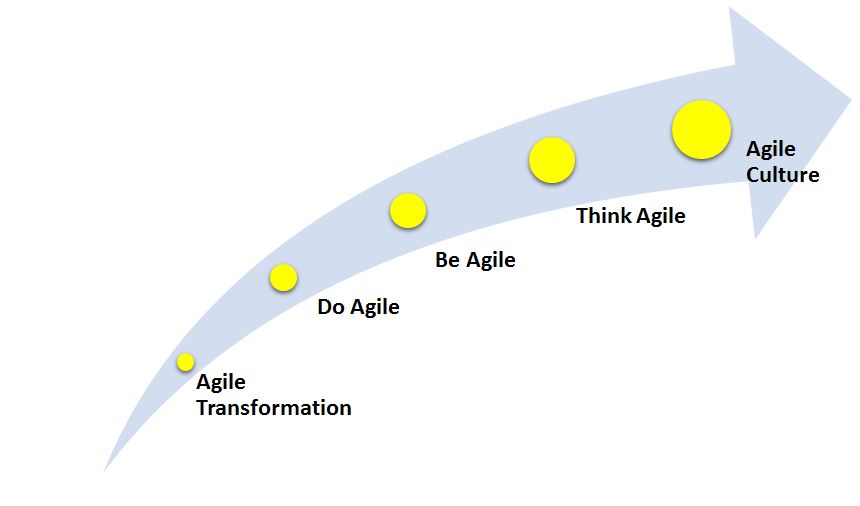 The managers of BO started to research new methodologies to make this system better. From here, they investigated the Key Performance Indicators (KPIs) of BO.

Kanban was decided as the best framework to adopt because of the following reasons:

As a definition, efficiency is to do things well without waste of efforts and time. From this point of view, there is an increasing need to eliminate the non-value added activities during the market responsiveness.

Cycle time refers to the time between the beginning of an analysis and the product launch. Lead time refers to the time between the creation of tickets and the product launch. As it is understood, lead time is the wasted time after the creation of tickets. It is essential to shorten this element of the development process. In contrast to the Waterfall model, Agile will help to achieve this goal.

Associated with the marketing conditions, business teams create many tickets. It is important to focus on the important demands rather than the urgent ones. To succeed with this aim, there is an increasing need to prioritize the tickets according to their importance level. With the help of Agile, the product owner can assume this role.

Business teams want to be informed about the status of their tickets. One of the ways to inform them is reporting your team's status regularly. The other way is to include them in the production process as a part of the team. The product owner can help facilitate this, and it should help achieve transparency within the organization.

So far in our story, our roadmap to Agile transformation had been completed in two phases.

In the first step, in December 2014, Scrum was chosen as our Agile approach. Then, pilot Scrum teams were established.

In January 2015, BO hired an Agile consultant. In terms of a lean and Agile perspective, the process was analyzed and this analysis was shared with the marketing teams. Scrum is based on an incremental and iterative approach during the process. It was understood that Scrum is not appropriate to the business manner in Business Operations department. Moreover, because the shares of Turkcell are traded on NYSE, segregation of competency levels is investigated by SOX audits.

In March 2015, a new Agile approach was chosen,  called Extended Kanban. Kanban is helpful to the structure of Business Operations department to meet the market demands in a faster and effective way with real time prioritization (Extended Kanban is explained in detail in section 2.2).

In the second quarter of 2015, pilot teams were established and pilot schemes were started. By establishing a new Kanban team, all the employees were gathered together in the same location.

In July 2015, a pilot teams event was organized to motivate the newly transformed teams and to help the other teams get introduced to the idea of an Agile/Kanban transformation. Empowering the organization was the main goal.

August 2015 was the second step in our transformation. It was the time of our Transformation Kick-Off. In Business Operations, 9 Kanban teams had been established by December 2015 and the transformation had been completed.

2.1. Evolution of the Kanban Board

During the transformation, Kanban boards had also been transformed according to necessity. A digital board was aligned with the process tools and was used to see Andon (the alerts that refer to the threats for quality or efficiency) and to measure the T2M and effort. Having the ability to measure and quantify is the most important factor to change business operations in an effective way.

The evolution of the Kanban Board can be seen in Figure 3. 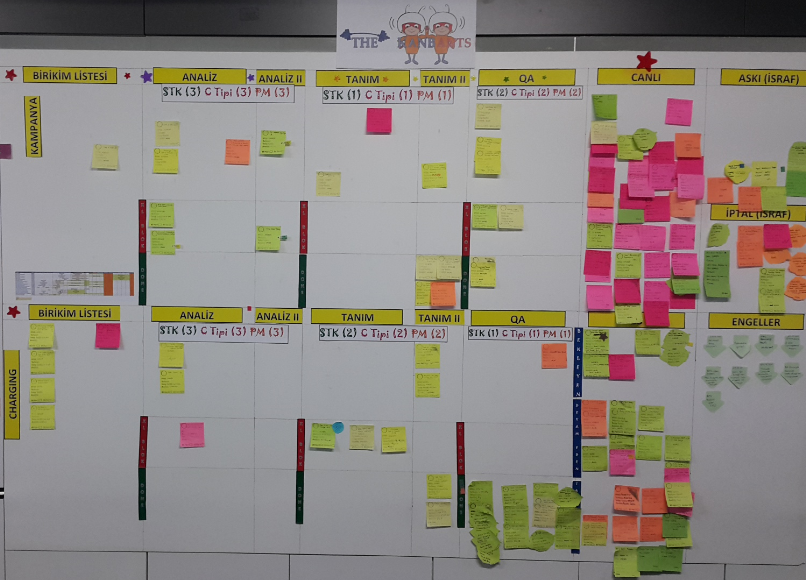 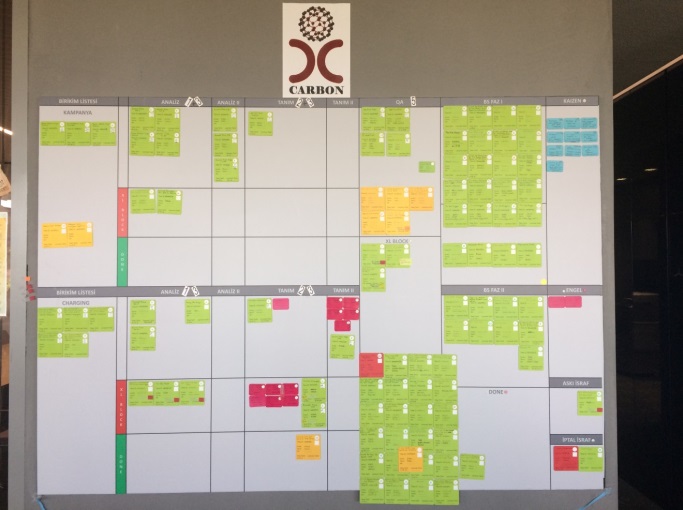 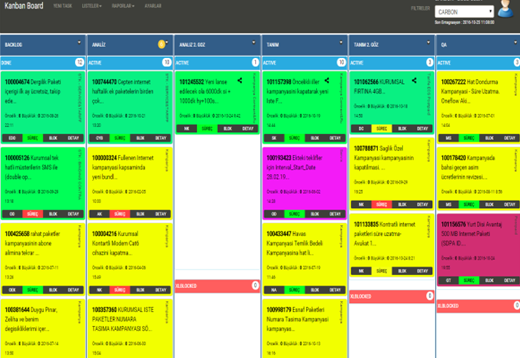 The underlying reason to call the approach Extended Kanban is that it integrates the best experiences from both Scrum and Kanban, while also considering the principles of the Agile Manifesto and Lean Philosophy.

As considered in the Agile Manifesto, individuals and interactions are great reminders of where to focus the Business Operations department. To build something useful, Business Operations emphasizes working products rather than documentation. Also, all the members focus on being flexible and accommodating customer collaboration, rather than contract negotiation. Business Operations acknowledges that things will change, so they don’t spend time trying to manage a plan. They respond to the change.

Openness, commitment, and rituals such as ‘Retrospective Meetings’ and ‘Daily Meetings’ are taken from Scrum. A pulling system and WIP limits are taken from Kanban. In terms of a lean perspective, the goal is to create value by considering ways to continuously improve.

To sum up, our Business Operations department had completed its Agile transformation within a year with the facilitation of management in the organization. Two different Agile approaches were applied, and finally ‘Extended Kanban’ was chosen. 9 Kanban teams were established, full of motivated employees. Synergy was created between Business and ICT teams. Related to these enhancements, the increase in productivity is about 25%, the decrease in time to market is about 30%. That’s why customer satisfaction has increased by about 50%. Business Operations experienced many changes during its transformation and it adapted to these changes. After the transformation, it’s time to complete the next steps until the organization fully adopts the Agile culture.