Traditionally, communication between microservices is done using their REST APIs. As systems evolve, however, the number of microservices gets larger—making communication more complex. Services begin depending on each other in a tightly coupled manner, slowing down dev teams work. Although this type of model may exhibit low latency, it only works if services are highly available.

When you have a legacy platform, it’s recommended that you implement asynchronous messaging to de-couple it and ready it for a move to microservices.

This tutorial will teach you:

Apache Kafka is a distributed streaming platform. It was initially conceived as a message queue and open-sourced by LinkedIn in 2011. Its community evolved Kafka to provide key capabilities:

The Consumer Group in Kafka is an abstraction that combines both models. Record processing can be load balanced among the members of a consumer group and Kafka allows you to broadcast messages to multiple consumer groups. It is the same publish-subscribe semantic where the subscriber is a cluster of consumers instead of a single process.

Popular use cases of Kafka include:

Create a directory for the project.

Create an apps.jh file that defines the store, alert, and gateway applications in JHipster Domain Language (JDL). Kafka integration is enabled by adding messageBroker kafka to the store and alert app definitions.

Now, in your jhipster-kafka folder, import this file using import-jdl.

In the project folder, create a sub-folder for Docker Compose and run JHipster’s docker-compose sub-generator.

The generator will ask you to define the following things:

Almost when the generator completes, a warning shows in the output:

You will generate the images later, but first, let’s add some security and Kafka integration to your microservices.

This microservices architecture is set up to authenticate against Keycloak. Let’s update the settings to use Okta as the authentication provider.

First of all, go to Okta and get a free developer account.

Click Done to continue. Copy the Client ID and Client secret, as you will need them to configure your JHipster application. You can find the Org URL at the top right corner of your Okta Dashboard.

JHipster applications require the specific user roles ROLE_USER and ROLE_ADMIN to be included as claims in the ID Token. In the Okta Developer Console, go to Users > Groups and create a group for each JHipster role, then add users to each group.

In the project, create a docker-compose/.env file and add the following variables. For the values, use the settings from the Okta web application you created:

The same authentication must be set up for the JHipster Registry. Edit docker-compose/jhipster-registry.yml and set the same values.

Open docker-compose/central-server-config/application.yml and add your Okta settings there.

The registry, gateway, store, and alert applications are all configured to read this configuration on startup.

Communicate Between Store and Alert Microservices

The JHipster generator adds a kafka-clients dependency to applications that declare messageBroker kafka (in JDL), enabling the Kafka Consumer and Producer Core APIs.

For the sake of this example, update the store microservice to send a message to the alert microservice through Kafka, whenever a store entity is updated.

In the store project, create an AlertService for sending the event details. This service will build the payload and serialize it into a JSON String, and use the default Kafka StringSerializer and StringDeserializer already defined in application.yml.

Inject the AlertService into the StoreResource API implementation, modifying its constructor. Also modify the updateStore call to publish a StoreAlertDTO for the alert service:

Since you are going to deploy the prod profile, let’s enable logging in production. Modify the store/src/main/java/com/okta/.../config/LoggingAspectConfiguration class:

Edit store/src/main/resources/config/application-prod.yml and change the log level to DEBUG for the store application:

NOTE: You’ll need to set a value for the email (e.g., list@email.com will work) in src/test/.../application.yml for tests to pass. For Docker, you’ll override the {distributionListAddress} and {username} + {password} placeholder values with environment variables below.

Update spring.mail.* properties in application-prod.yml to set Gmail as the email service:

Add a Kafka Consumer to Persist Alert and Send Email

Create an AlertConsumer service to persist a StoreAlert and send the email notification when receiving an alert message through Kafka. Add KafkaProperties, StoreAlertRepository and EmailService as constructor arguments. Then add a start() method to initialize the consumer and enter the processing loop.

NOTE: Any unhandled exception during message processing will make the service leave the consumer group. That’s why there’s code above that catches Exception.

As a last customization step, update the logging configuration the same way you did for the store microservice.

Modify docker-compose/docker-compose.yml and add the following environment variables for the alert-app application:

Edit docker-compose/.env and add values for the new environment variables:

Make sure Docker Desktop is running, then generate the Docker image for the store microservice. Run the following command from the store directory.

Repeat for the alert and gateway apps.

Before you run your microservices architecture, make sure you have enough RAM allocated. Docker Desktop’s default is 2GB, I recommend 8GB. This setting is under Docker > Resources > Advanced.

Then, run everything using Docker Compose:

You will see a huge amount of logging while each service starts. Wait a minute or two, then open http://localhost:8761 and log in with your Okta account. This is the JHipster Registry which you can use to monitor your apps’ statuses. Wait for all the services to be up. 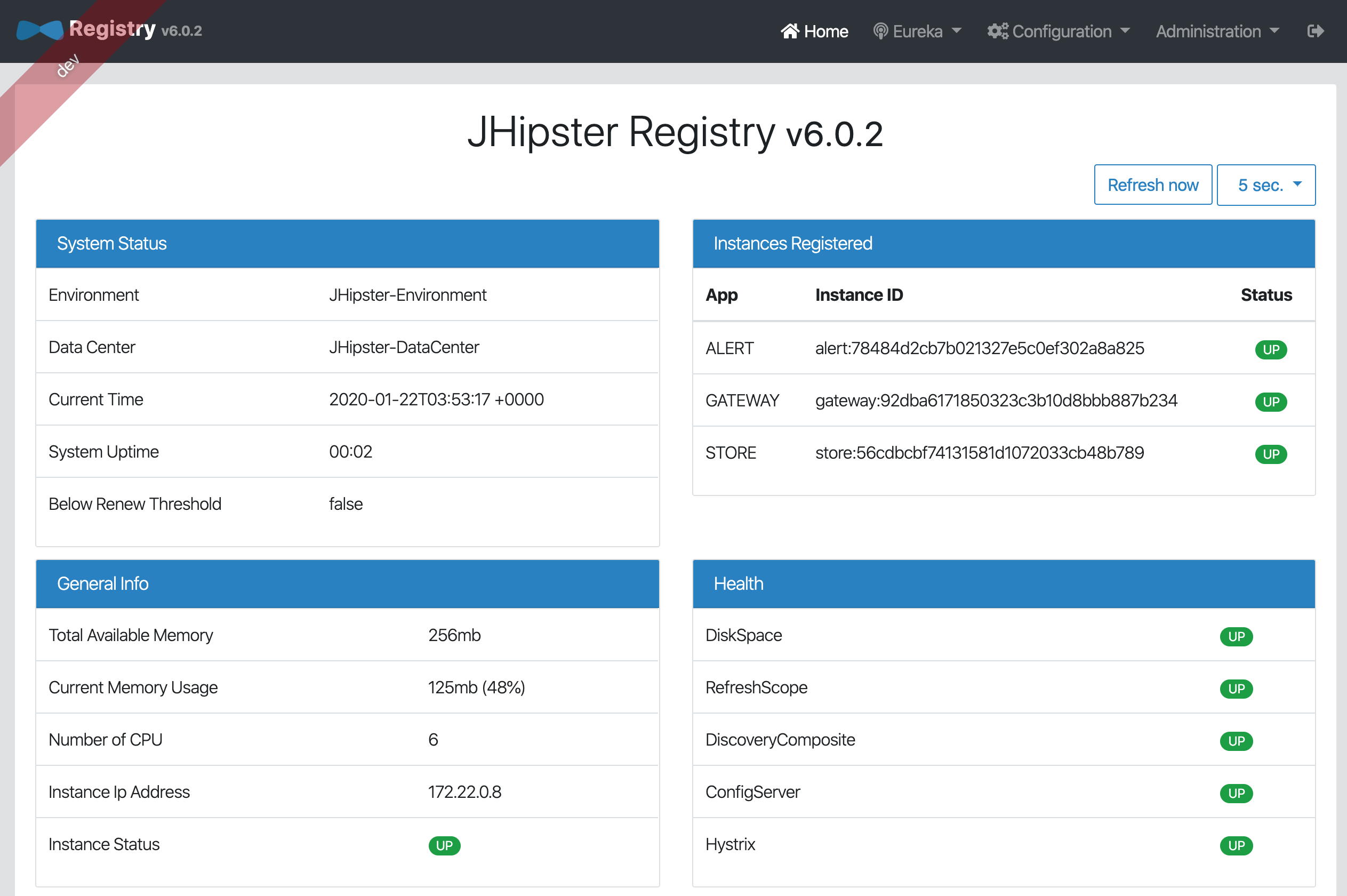 You should see log entries indicating the consumer group to which the alert microservice joined on startup:

Once everything is up, go to the gateway at http://localhost:8080 and log in. Create a store entity and then update it. The alert microservice should log entries when processing the received message from the store service.

If you see a MailAuthenticationException in the alert microservices log, when attempting to send the notification, it might be your Gmail security configuration.

IMPORTANT: Don’t forget to turn off Less secure app access once you finish the test.

Update a store again and you should receive an email with the store’s status this time.

In this tutorial, authentication (of producers and consumers), authorization (of read/write operations), and encryption (of data) were not covered, as security in Kafka is optional. See Kafka’s documentation on security to learn how to enable these features.

Learn More About Kafka and Microservices

This tutorial showed how a Kafka-centric architecture allows decoupling microservices to simplify the design and development of distributed systems. To continue learning about these topics check out the following links:

There are also a few tutorials on Kafka and microservices that you might enjoy on this blog:

You can find all the code for this tutorial on GitHub.