In my previous article, I reviewed the basics of iText 7. Here, I focus on the barcode support provided by the iText 7 library. Firstly, I'll provide a short overview of barcodes, and then demonstrate barcode generation for every supported barcode type in the library.

Here is a simple definition of ‘barcode’ according to Wikipedia:

A barcode or bar code is a method of representing data in a visual, machine-readable form.

Most barcode standards are managed by the GS1 organization. If you want to see some examples of barcodes, please check the barcode sheet on their site. In general, we recognize two basic barcode types:

iText 7 library supports many barcodes, but not all the options mentioned on Wikipedia. Nevertheless, I believe the library supports all the common ones. The section dedicated to 1D barcodes contains some generalization as there are five supported barcodes. Therefore, I'll begin with an explanation of generating the 2D barcodes, because there are only two of them.

Prerequisite: All the codes below, expect iText 7, are basic knowledge. Please check my previous article where I covered that. Additionally, my project has recently been upgraded to the latest libraries (Spring Boot 2.4.2 and iText 7.1.14).

Matrix or multi-dimensional (2D) barcodes are represented by black and white "dots." These barcodes are compact and capable of holding high-capacity symbols in the unit area.

iText 7 supports, as already mentioned, only two types of 2D barcodes: QR codes and Data Matrixes. Let's start with QR codes as this barcode is pretty common these days.

A QR code (abbreviated from Quick Response code) often contains data for a locator, identifier, or tracker that points to a website or application. See Wikipedia for more details.

Note: The test we added in the previous snippet is not testing the correctness of the QR code (the image itself), but just its processing. Hopefully, I will focus on such tests in a future article in this series.

When we look at the generated PDF we should find the QR code and the label of the encoded barcode value. See the below screenshot.

A data matrix consists of black and white dots arranged in either a square or rectangular pattern, also known as a matrix. The encoded information can be text or numeric data and it can store up to 2,335 alphanumeric letters. See Wikipedia for more details.

As already mentioned, the use of a data matrix barcode is almost the same as QR codes. We just need to use a different class (BarcodeDataMatrix instead of BarcodeQRCode). We can also simplify the previous verbose code. To generate a data matrix barcode, we should follow these steps:

You can see the output of the generated data matrix barcode based on the code above in the next screenshot. 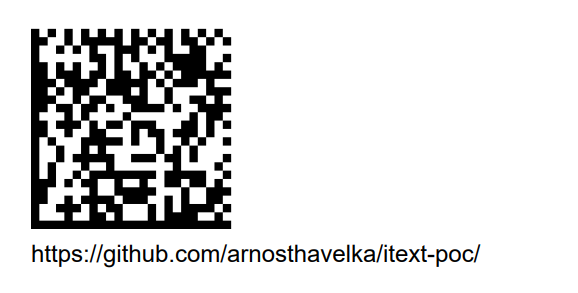 The screenshot of Data Matrix (including encoded URL value) taken from example-datamatrix.pdf.

Linear (1D) barcodes are represented by lines and spaces of various widths that create specific patterns. Since the library supports many 1D barcodes, I use a generalized code to avoid duplication.

The main principles of using the iText 7 library for barcode generation have been explained above. Therefore, the following steps are slightly simplified. This generalized method can be used to process different 1D barcode types very easily. In order to do that, follow these steps:

The create1DBarcode method from the code above is almost the same as the code for 2D barcode generation. Here are the only exceptions:

The International Article Number (also known as European Article Number or EAN) is used by systems in global trade to identify a specific retail product type, in a specific packaging configuration, from a specific manufacturer. This barcode is represented by the digits (0–9), unlike some other barcodes. See Wikipedia for more details.

To generate an EAN code, we just call the method generateBarcode with these arguments (line 3):

The generated EAN barcode based on the code above looks like this: 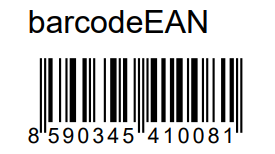 The screenshot of EAN (including test method name) taken from example-ean.pdf.

We can generate Code 39 using the same method as an EAN barcode mentioned above. We just call the generateBarcode method with the Barcode39 class as the last argument (line 3).

The generated Code 39 barcode based on the code above should look like this:

The screenshot of Code 39 (including test method name) taken from example-barcode39.pdf.

Code 128 is a high-density linear barcode symbology defined in ISO/IEC 15417:2007. It is used for alphanumeric or numeric-only barcodes. See Wikipedia for more details.

We should use the Barcode128 class as an argument for the generateBarcode method (line 3).

The generated Code 128 barcode based on the code above looks like this:

The screenshot of Code 128 (including test method name) taken from example-barcode128.pdf.

MSI (also known as Modified Plessey) is a barcode symbology developed by the MSI Data Corporation, based on the original Plessey Code symbology. MSI is used primarily for inventory control, marking storage containers and shelves in warehouse environments. See Wikipedia for more details.

We can generate such a barcode by using the BarcodeMSI class as an argument to the generateBarcode method (line 3).

The generated MSI barcode based on the code above looks like this:

The screenshot of MSI barcode (including test method name) taken from example-barcodeMSI.pdf.

POSTNET (Postal Numeric Encoding Technique) is a barcode symbology used by the United States Postal Service to assist in directing mail. The ZIP Code or ZIP+4 code is encoded in half- and full-height bars. See Wikipedia for more details.

We can generate this final barcode in the same way as all the 1D barcodes above. Just pass the BarcodePostnet class as an argument to the generateBarcode method (line 3).

The generated POSTNET barcode based on the code above looks like this:

The screenshot of POSTNET barcode (including test method name) taken from example-barcodePOSTNET.pdf.

In this article, I provided detailed instructions for generating all barcodes supported by the iText 7 library. I began with an overview of generating every 2D barcode type before demonstrating the usage of 1D barcodes. You can find all the code mentioned above in my GitHub repository.

In my next article, I plan to go back to the beginning and explain text formatting within the PDF page using iText 7.