WebDriverIO framework is being widely used by the testing community to perform automation testing on both web applications and native mobile applications. The tests performed on WebdriverIO are simple and concise. Also, you can control browsers with just a few lines of code. All these reasons have made testers adopt WebDriverIO to fulfill their browser testing needs.

In this WebDriverIO tutorial, I am going to cover the WebDriverIO setup, where I’ll show you how to set up the WebDriverIO and run your first automation test. I’ll take a step-by-step approach to give you a detailed explanation of the installation process. I’ll answer any questions that might arise in your mind such as what is WebdriverIo, what are its prerequisites etc.

WebdriverIO is a browser and automation test framework based in Node.js. Adding helper functions in WebDriverIO is simple in WebDriverIO. Also, it can run both on the WebDriver protocol and Chrome Devtools protocol, making it efficient for both Selenium Webdriver based cross-browser testing or Chromium based automation. To top it off, since WebDriverIO is open source, you get a bunch of plugins for your automation needs.

The Key Features of WebDriverIO:

By June 2020, Selenium WebDriver on GitHub received 18k stars, and 5.8K forks, while WebDriverIO has received 5.8 K stars and 1.7 K forks. It’s safe to assume that the Selenium Webdriver is stronger. But still, WebDriverIO has its advantages, as it allows you to control web apps and mobile apps through just a few lines of code. Also, these test scripts are always simple and concise.

Prerequisites For Setting Up WebDriverIO

Now that you know what WebdriverIO is, I’ll further explore the prerequisite for setting up WebDriverIO.

Once you are ready with the above mentioned required tools, you can go ahead with the WebDriverIO setup.

The -y is “Yes’. When you run the above command, it starts asking some questions and for those questions, you are saying Yes for all questions asked during initializing. If you do not wish to omit -y then you can do that but you have to give manual all answers. This will set default values set by the NPM project. This will Create package.json file.

Below is the example of with -y and without -y

For this WebDriverIO tutorial, I’ll recommend you to use the test runner. You can find the test runner in @wdio/cli NPM package for WebdriverIO version 5.

Test runner has many great features that could help you during scaling Selenium test automation. In case you’re wondering what is WebdriverIO CLI, you can refer to their official documentation for more information.

To install WebDriverIO CLI, execute the below command in the terminal.

By running the above command, you’ll create dev dependency and save it in the package.json file. If you open package.json then you will find below entry.

WebDriverIO configuration helps you to configure the different features available with WebDriverIO. These are the default configuration and you can change them later as well.

In order configure, you need to write below command

Again -y is Yes and you are giving your consent to all prompts asked during the configuration process.

If you run the above command, you will see the following WebDriveIO dependencies installed.

Once installed, you should see below information on your console

If you want to perform Selenium test automation, then you need to execute

At this stage, I have created folders related to the WebDriverIO setup. You can now start with writing WebDriverIO scripts. In WebDriverIO technical language, it calls the specs folder, you can give any name of the folder.

Create a spec folder by running the below command for Selenium test automation.

You will see below folder structure: 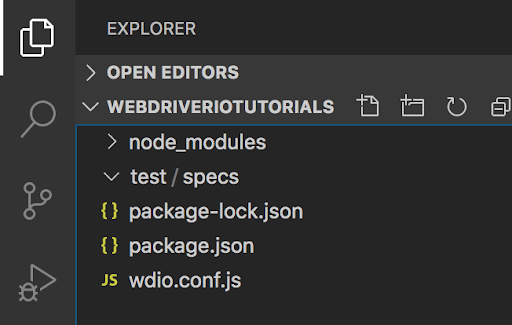 I have created a test/specs folder, where I’ll place all WebDriverIO testing files.

Note: If you are running on Window, then create a text file with js extension.

Now, I will write a small Selenium test automation script which opens up the URL: https://www.lambdatest.com/

Now you’re are ready to run your first WebDriverIO script. You just need to run the command shown below:

I have created wdio.conf.js which get executed and there is one section called specs shown as below,

Default, './test/specs/**/*.js' is mentioned, in this case, all js files get executed. In case you want to execute in particular then change write full file name.

Feel free to share this article with your peers and help them in their journey of learning automation testing. In case of any doubts or questions, do reach out to us in the comment section below. That’s all for now.

Published at DZone with permission of Rahul Jain . See the original article here.