WebDriverIO is an open-source next-generation automation framework, that allows us to automate modern web and mobile applications. It has an extended set of built-in and community plugins that help in designing robust, scalable tests and easily integrate with third-party applications including cloud services (BrowserStack, Applitools, Sauce Labs), Docker, Jenkins, Bamboo, GitHub, and many more.

Refer to the official documentation of WebDriverIO from https://webdriver.io/docs/gettingstarted.

Cucumber is a Behavioral Driven Development (BDD) tool that allows one to write the scenarios from the user’s perspective. It is written in plain English language, which makes it easy to interpret and understand for all the stakeholders like product owners, domain experts, business analysts, developers, testers, and end-users. The users can write acceptance test scenarios to describe the behavior of the application. Cucumber utilizes the Gherkin keywords like Feature, Background, Scenario, Given, When, Then, and many more to write the test scenarios. It also maps the gherkin steps of the test scenarios to the actual test code, which can be generated in different languages supported by Cucumber like Java, Python, JavaScript, and many more.

An automation team in a project is using the WebDriverIO framework and its plugins to design powerful and robust automation tests and perform end-to-end testing of the web application. The client has requested the project team to test the application from the user’s perspective by implementing BDD. The team has decided to use Cucumber as the BDD framework and write acceptance test scenarios in plain English language using Gherkin keywords. These scenarios must be mapped to the automation test code.

The project team must look forward to designing a framework that can integrate Cucumber BDD scenarios with the WebDriverIO test automation code, execute on multiple browsers, and generate interactive test reports. This will enable the team to achieve automated testing of the application from the user’s perspective.

Let’s have a look at implementing the integration of WebDriverIO with Cucumber:

The above diagram indicates the model to integrate Cucumber with WebDriverIO. It mainly focuses on feature files, step definitions classes, page object classes, and wdio.conf.js file.

1. Launch VSCode IDE and install the necessary extensions, as stated below:

2. Create a new project folder with the name: WebDriverIO_Cucumber_Project at any desired location in the machine (Ex. C:\MyProjects).

4. Open a new terminal in VSCode and execute the command: npm init -y to create a basic structure of the package.json file.

5. Observe the package.json created inside the project folder:

7. Observe the node_modules folder created inside the project folder. This folder contains all the necessary libraries.

8. Execute the command: npx wdio config to create and customize the wdio.conf.js file in the project.

9. Answer the prompted questions as stated below:

These configuration settings can be modified later in the wdio.conf.js file if needed.

10. Observe the package.json inside the project folder:

11. Observe the wdio.conf.js created inside the project folder. Cucumber options can be modified by changing the settings in the 'CucumberOpts.'

12. In the project folder, create a new folder with the name: features.

13. Inside the features folder, create a new file with the name: login.feature.

14. Below is the code for the feature file:

The above code in the feature file represents the valid and invalid login scenarios with validation of success and error messages.

16. Inside the features folder create a new folder with the name: step-definitions.

17. Inside the step-definitions folder, create a new file with the name: steps.js.

18. Add the below line of code in the steps.js file:

20. Rename the variables appropriately to make the code more understandable

21. Below is the code for the step definition file:

The above code in the step definition file represents the methods generated for each scenario step in the feature file. Cucumber Expressions are used to handle similar steps smartly.

Create Page Objects and Specify the Selectors for UI Elements

22. Inside the features folder create a new folder with the name: pages.

24. Below is the code for the BasePage class:

25. Below is the code for the LoginPage class:

26. Below is the code for the SecurePage class:

27. Interact with Page Object classes and methods and write the WebDriverIO commands in the step definition methods to perform the test automation. Use expect() to perform the necessary validations.

28. Below is the code for the step definition file:

The above code in the step definition file represents the interaction of elements with WebDriverIO commands to perform automation.

29. Open the wdio.conf.js file and search for 'capabilities.'

32. Below is the updated code for capabilities in the wdio.conf.js file:

The above code in the wdio.conf.js file represents the capabilities for chrome and firefox browsers.

33. In the project folder, create a new folder with the name: reports.

34. Inside the reports folder create a new folder with the name: screenshots.

35. Open the wdio.conf.js file and search for 'afterStep: function' under the Hooks section.

36. Uncomment the function and write the code to take a screenshot and save it in the reports/screenshots folder with a timestamp.

37. Below is the code for the afterStep function in the wdio.conf.js file:

The above code in the afterStep function will take a screenshot after every cucumber step, in event of step failure.

38. Add the below line of code in the wdio.conf.js file as a first-line to import the 'moment' library:

39. We want to generate interactive HTML reports, which can provide detailed information about the test execution, status, and display screenshots. We must use allure-reporter to generate the allure report.

41. Execute the command: npm install -g allure-commandline --save-dev to install Allure Commandline, which is used to generate allure reports from the test results.

42. Open the wdio.conf.js file and search for 'reporters.'

43. Update the reporters to 'allure' and specify the output directory for storing the allure results.

45. Below is the code for reporters in the wdio.conf.js file:

The above code will use an allure reporter to generate and save the allure results in the specified path.

46. Below is the project structure: 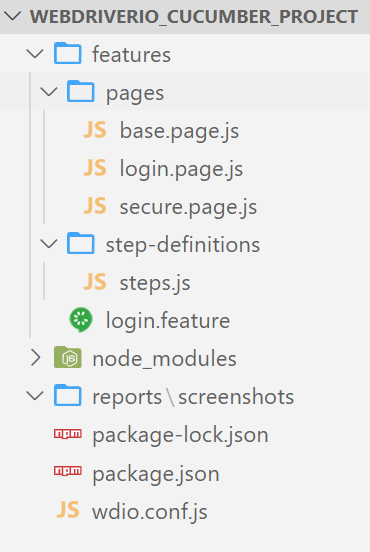 48. Observe the test automation in real-time across Chrome and Firefox browsers and view the test results in the terminal window.

49. Observe the 'allure-results' folder created inside reports. This folder contains all the files associated with the test results.

50. Observe the 'screenshots' folder with the page screenshots for the failure scenario steps.

52. Observe the 'allure-report' folder created inside the project. This folder contains the allure report and associated files.

53. Execute the command: allure open to view the allure report in a browser.

54. Below is the final project structure: 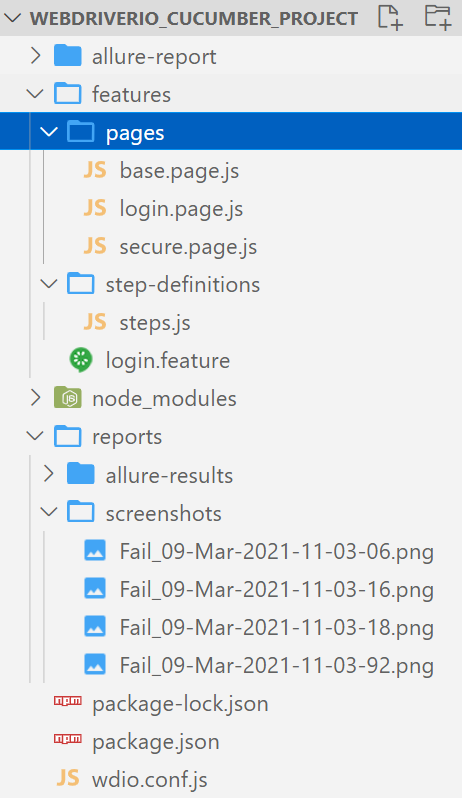 55. Below is the generated allure report: 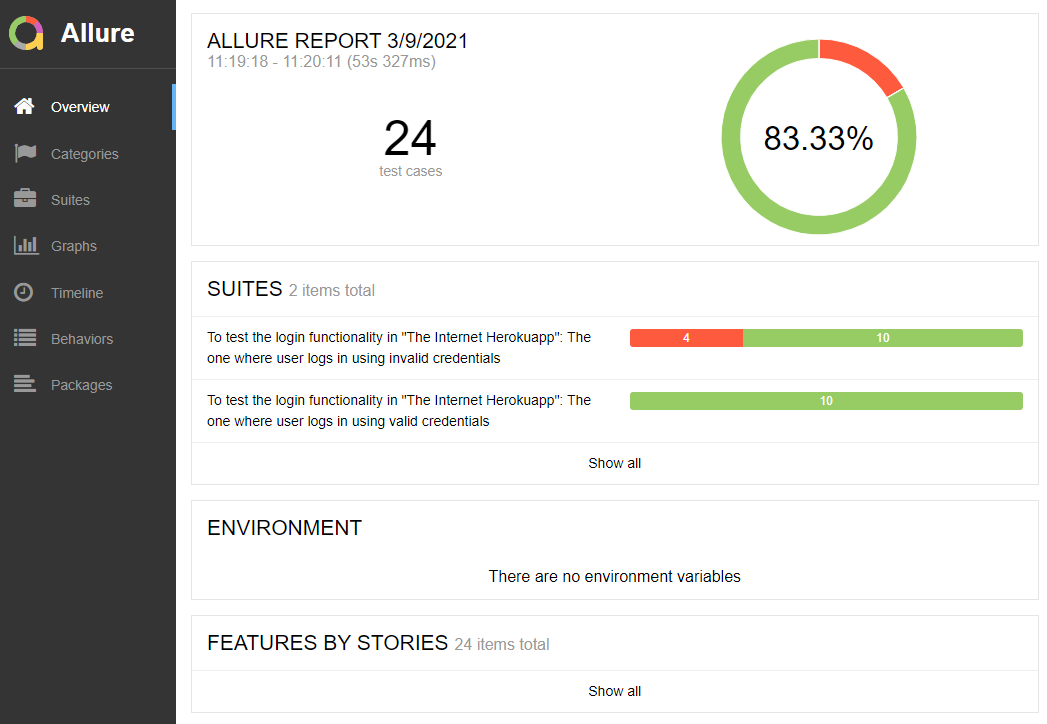 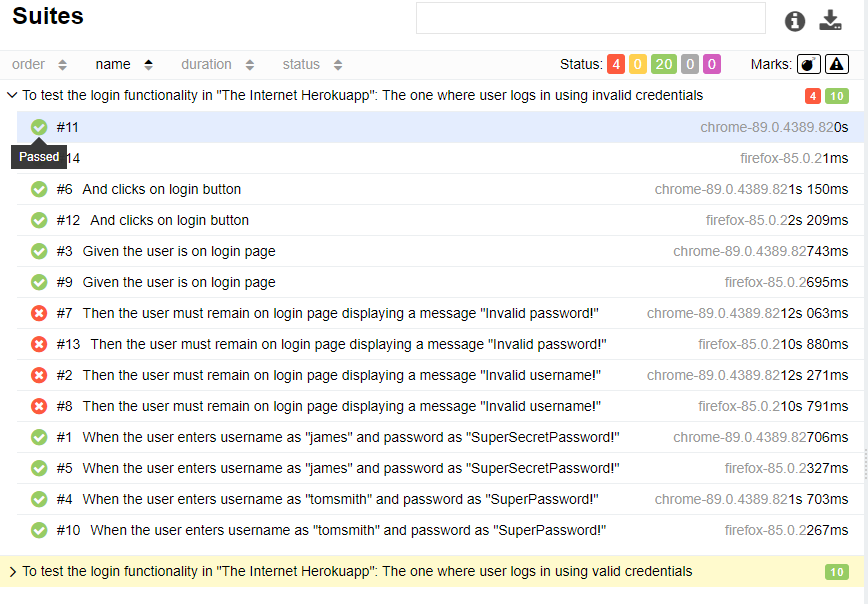 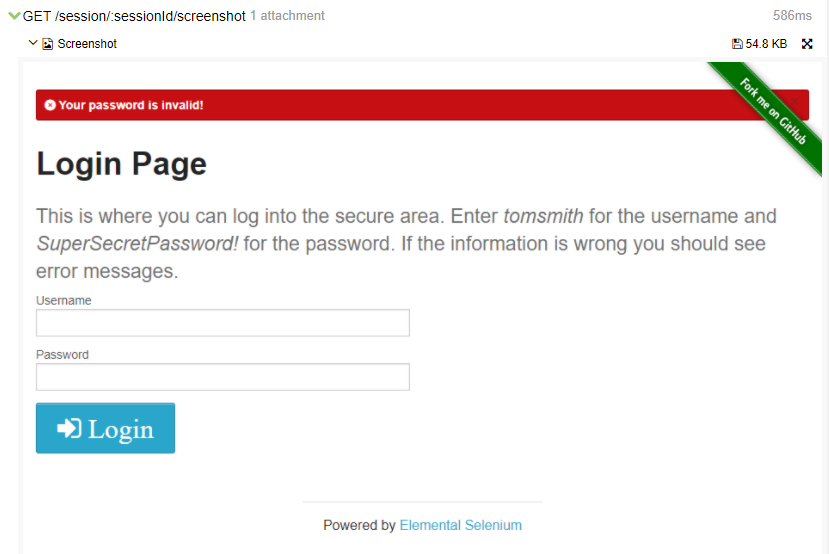