Many organizations have implemented DevOps in their applications, that’s true. But, at the same time, their database change process hasn’t realized any of these benefits and is still left in the dark ages. But what if you could automate that too? Yeah, you guessed right — it can be done using Liquibase. And here’s a Liquibase tutorial to show you how to do that.

Is This Liquibase Tutorial for You?

Are you manually executing scripts to your database? Or maybe you're wasting time validating database scripts received from your team?

After that, are you merging scripts into one file and executing them in every environment? How about deployment errors? Have you ever spent hours looking at who, why, and what was changed in the database?

But what if you can't have an entire CI/CD process right now or company policy doesn't allow you to run scripts on specific environments? That's not a problem for Liquibase.

By using Liquibase, you can:

What's more, thanks to this you will have:

Wanna know who, when, and why your database column changed? Keep on reading this Liquibase tutorial.

In a series of articles, I'll show you how we automated our database change process at Pretius using Liquibase and Git — examples from limited-access environments included. Let's start with this basic Liquibase tutorial.

What is Liquibase Exactly?

Liquibase (LB) is an open-source tool written in Java. It makes defining database changes easy, in a format that's familiar and comfortable to each user. Then, it automatically generates database-specific SQL for you.

My examples will be based on changesets written in SQL — it's the easiest way to start automating your Oracle database change process.

Extract the downloaded zip folder (e.g., to disk C:). After that, you must set a New Path System Variable to the liquibase-version#bin folder on your computer. For Liquibase to work properly, you must also have Java installed.

Go to your favorite CLI tool (I use Visual Studio Code) and type:

If everything's ok, you will see: 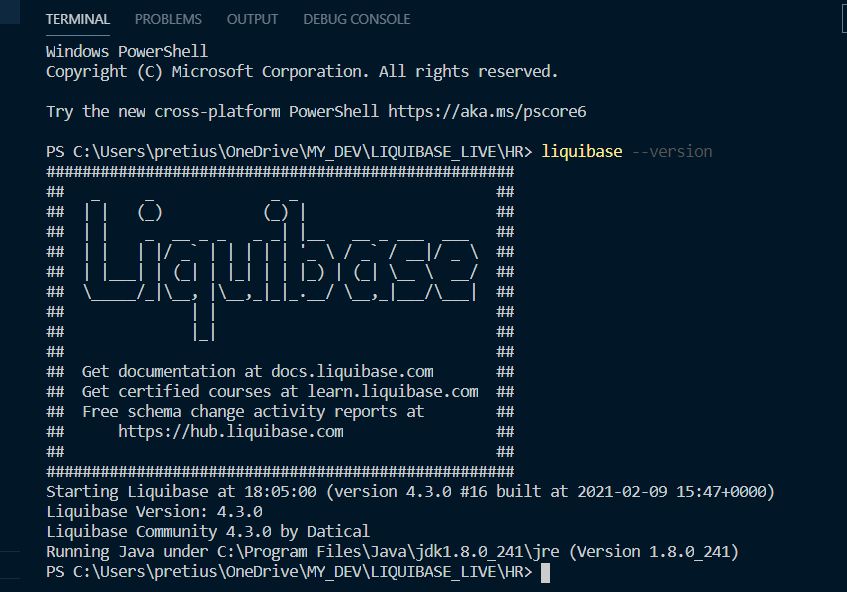 If you use UTF8 encoding in your files, remember to edit the liquibase.bat file by adding the line:

Configure Your Project and Liquibase

Ok, let's see how we can organize our files (folder HR is my GIT repository). In these folders, we will put files created during project development. If you had other types of objects (which are "create or replace" type), just create a folder with them, e.g., "synonyms." 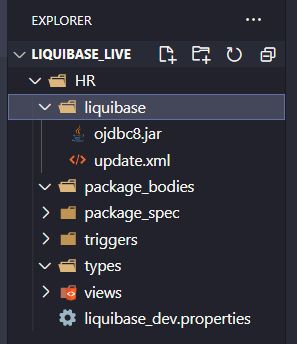 If your Oracle database is hosted on Oracle Autonomous Database, you need to use the wallet to connect to it through Liquibase. Therefore, download your wallet and remember the password for it.

Edit URL at your liquibase_local.properties file and set your connection name (from Wallet/tnsnames.ora and path to wallet):

Check your sqlnet.ora file, make sure there is "SSL_SERVER_DN_MATCH=yes". Don't change anything else.

Connect Liquibase With A Database

If everything is set properly, we can make the first connection to our DEV database. Start your favorite CLI from the HR folder (location of Liquibase properties file) — for this article, I use terminal directly from VS Code and connection to my local development database.

defaultsFile > name and location of our properties file.

(If you name properties file to "liquibase.properties" then you may omit this command because it's Liquibase default. I prefer to have different names for every connection.)

updateSQL > Liquibase command, only generation of SQL script (it won't do anything on your database).

In a few seconds LB will generate output_file.sql:

The update command will execute SQL to the database.

We need to create a changelog file that will point to our folders with objects (those we can create/replace).

It points to my objects folders and all of its content.

Liquibase always runs from our liquibase_dev.properties file and update.xml file, so It must see all of your files from there.

Ok, wait... but what about changes like DDL or DML? No problem.

We create a separate changelog file for that type of change and write our changesets inside of it.

Just create changelog.sql file and mark it as Liquibase SQL file by typing: 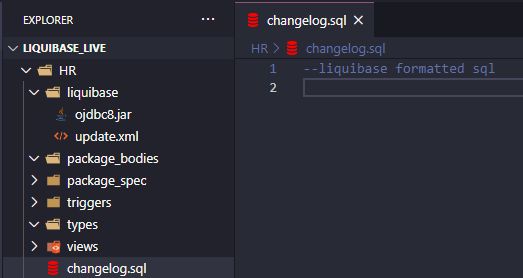 Point to our new changelog in master.xml file by adding:

The order in which you point to your changelogs or folders is very important. It tells Liquibase in which order to run your SQL. It is better to run changelogs first (inside of which is "create table(…)") and after that compile package that uses this table.

Let's ask LB to generate our SQL file (just to preview what changes are going to be made to our database).

If everything is fine, execute the following script to our database:

The table SHOES has been created. 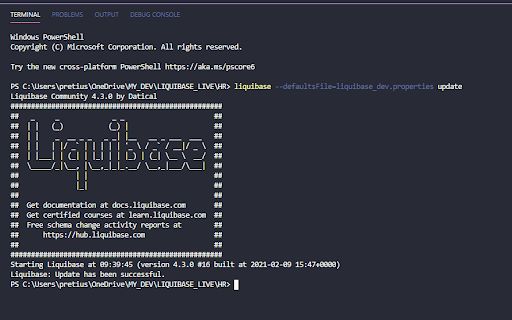 We can check who, why, and when created this table.

Finally, nothing is anonymous!

Now, we can do the same with some scripts. I created a package called SHOES_PKG in 2 separate files. Every file is a unique changeset and should be marked as a Liquibase formatted SQL file.

The SQL file is a unique changeset with additional parameters:

runOnChange:true — it means, every time we change our package, Liquibase will run this changeset against our database (compile this package).

stripComments:false — do not cut our code comments.

Now, if we check what SQL would LB run against database (updateSQL) — it would compile both package spec and package body.

Let's compile these package in our DB (update command).

Have a look at the MD5SUM column value — it's the last checksum of your changeset.

For now, all pending changes are executed; LB will not generate anything in SQL (besides locking LB table) — check it by running updateSQL.

Now, let's change our SHOES_PKG body and save the file.

The checksum of the file has changed, and LB will compile this package again — let's run an update. 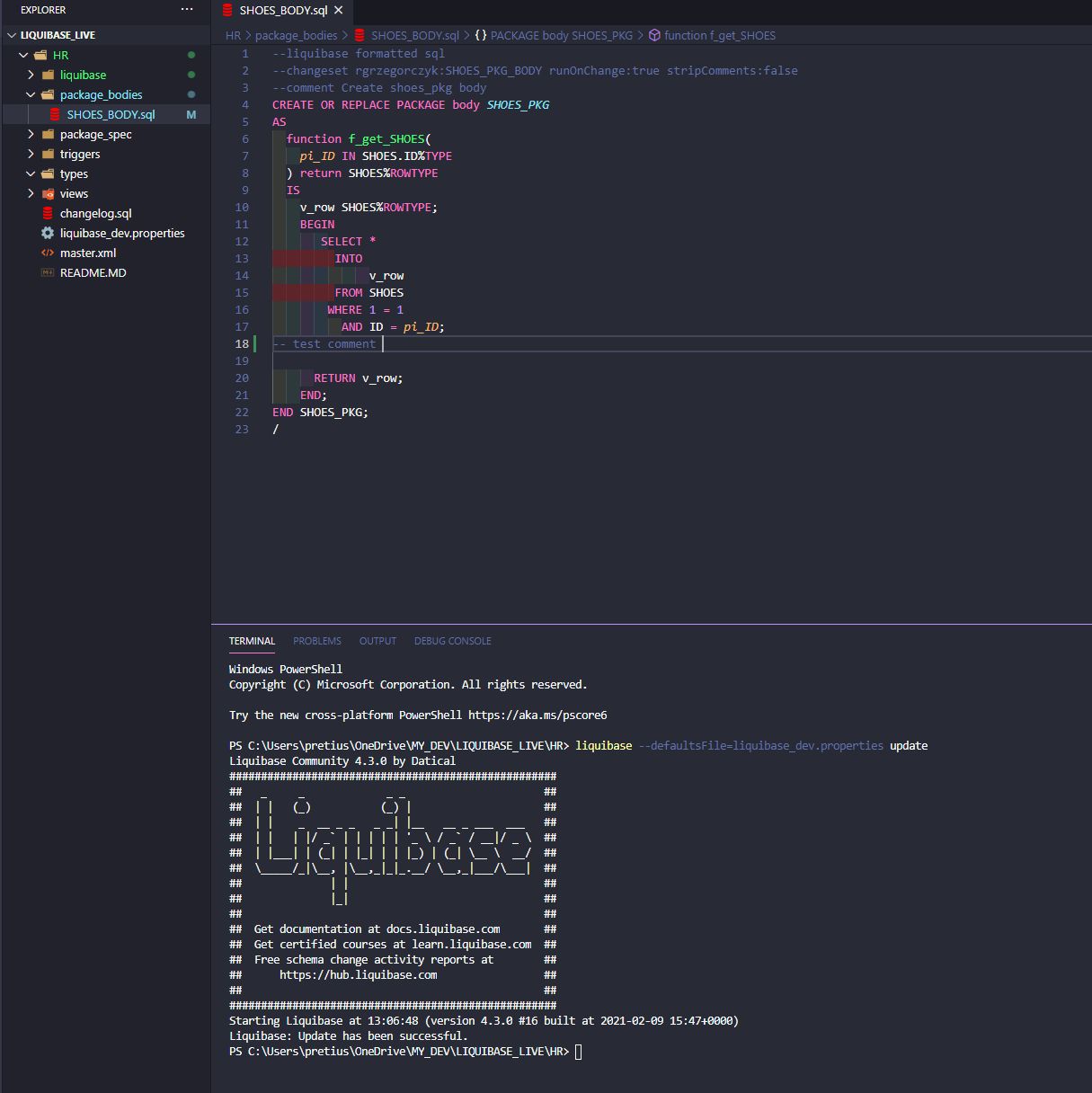 How to Install Liquibase in An Existing Software Project?

In this part of the Liquibase tutorial, you will learn how to implement database automation in an existing software project.

Is it possible without hours of additional work? Yes!

There are a few ways to automate your existing database using Liquibase. I will show you two which I found most useful — and you can choose the one that suits your needs best.

In the examples below, I'll be using the project created in the previous steps of this Liquibase tutorial.

Configure Liquibase in your project repository and leave all files as they are — just remember to add a path to them in your master.xml file.

So, I have created 2 procedures and 2 triggers before implementing Liquibase:

You DON'T need to add "changeset" or "–liquibase formatted sql" to your file right now.

I also added a path to a PROCEDURES folder to my master.xml.

Now, let's run Liquibase updateSQL to see what SQL Liquibase would like to execute: 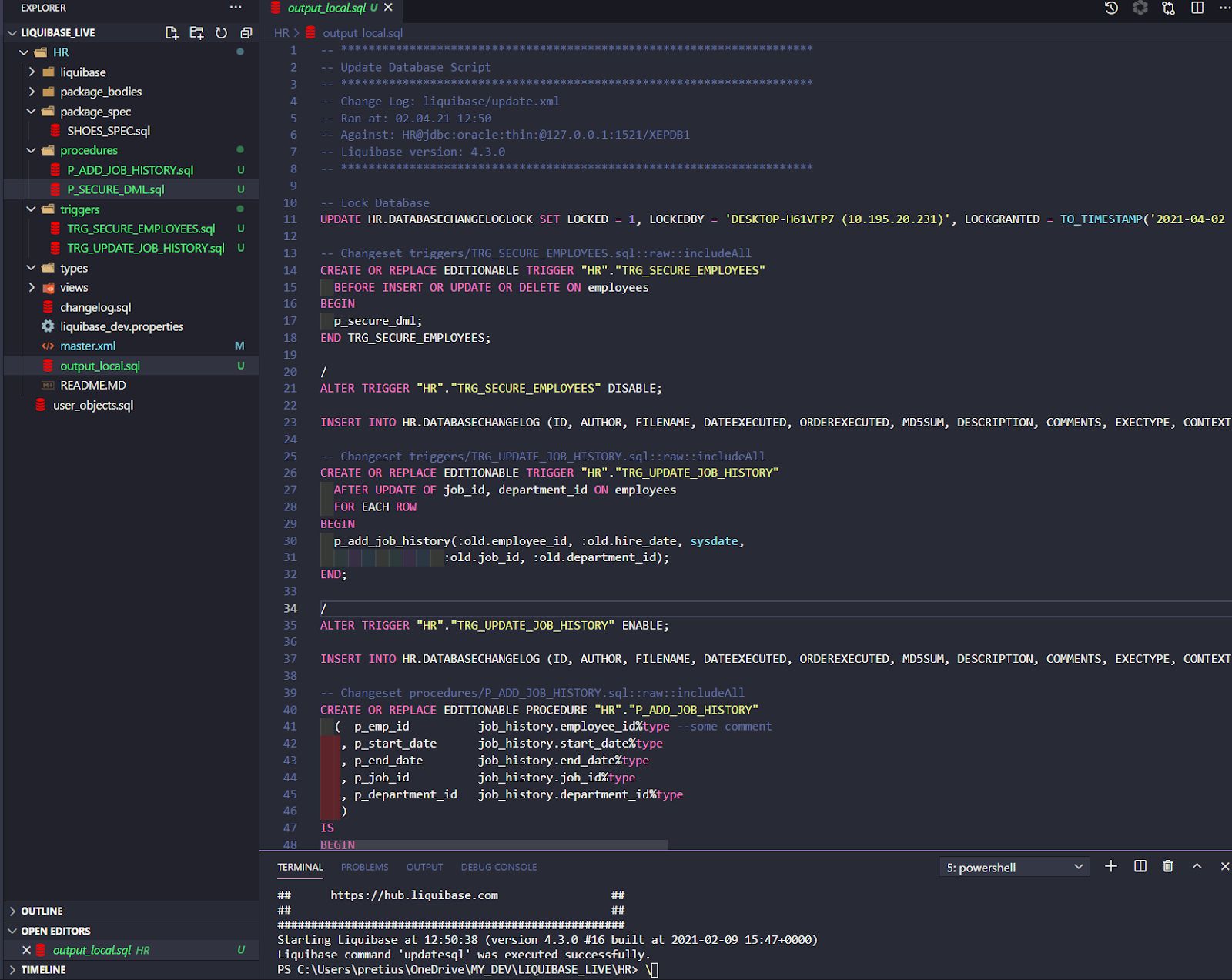 OK, bro. But this is not what we wanted! We already have these procedures and triggers in our database. We don't want to create these objects again.

The output SQL file is:

This is exactly what we wanted — just an SQL file with inserts in a DATABASECHANGELOG table. It will "tell" Liquibase that those objects were already created in the past, and there's no need to run them again.

Now, let's insert it into our Oracle database:

And we have 4 new changesets in the DATABASECHANGELOG table: 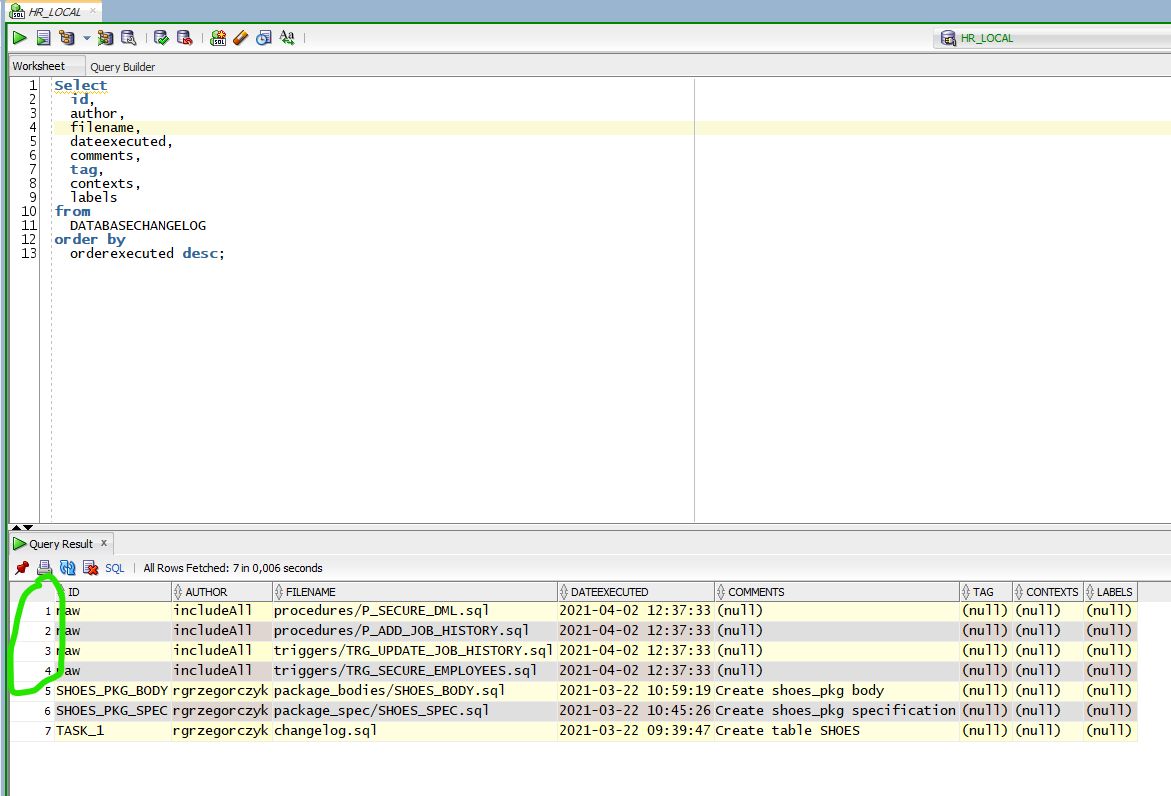 But what are these strange "raw" IDs? And why is the author called "includeAll"? Because this is the easiest and fastest way to move your existing project to Liquibase! And these changesets were created automatically.

If you'd like to do some changes, e.g., in P_ADD_JOB_HISTORY, just add a changeset — as you'd normally do when creating a new database object:

Then run the Liquibase Update command:

In the examples above, I showed you the easy way to add existing objects (which could be created or replaced) without creating changesets manually. In my opinion, it's the best way to install Liquibase if you have hundreds of objects in your existing database.

When it comes to objects which cannot be replaced, such as tables, we need to use a way described in the second scenario.

This option requires you to create changesets for objects and changes that were already executed to your database.

Objects Which You Create or Replace

Add objects and remember to have paths to folders in your master.xml file – just like described in the first scenario.

Or, a better way, create a changeset for every file like this:

That's more work, sure, but you get better info in your logs:

Objects that Cannot Be Created or Replaced

What can you do with other objects like tables, indexes, etc.?

Once again, there are two ways:

Let's have a closer look at the second way.

I have a few tables that were created before implementing Liquibase:

I create two changelog files in a new folder, HR/scripts_before_liquibase.

Also, I create an additional scripts_before_liquibase.xml file which will point to our changelogs.

The priority of "include file" is very important, as it tells Liquibase in which order to run scripts – first create tables, then create constraints and indexes.

It's good practice to have 2 files: one for creating tables, second for constraints. It will help you avoid conflicts when trying to create ref_constraint in a table that will be created a few seconds later.

OK, after adding all of our changesets, we will mark them as executed in the past. 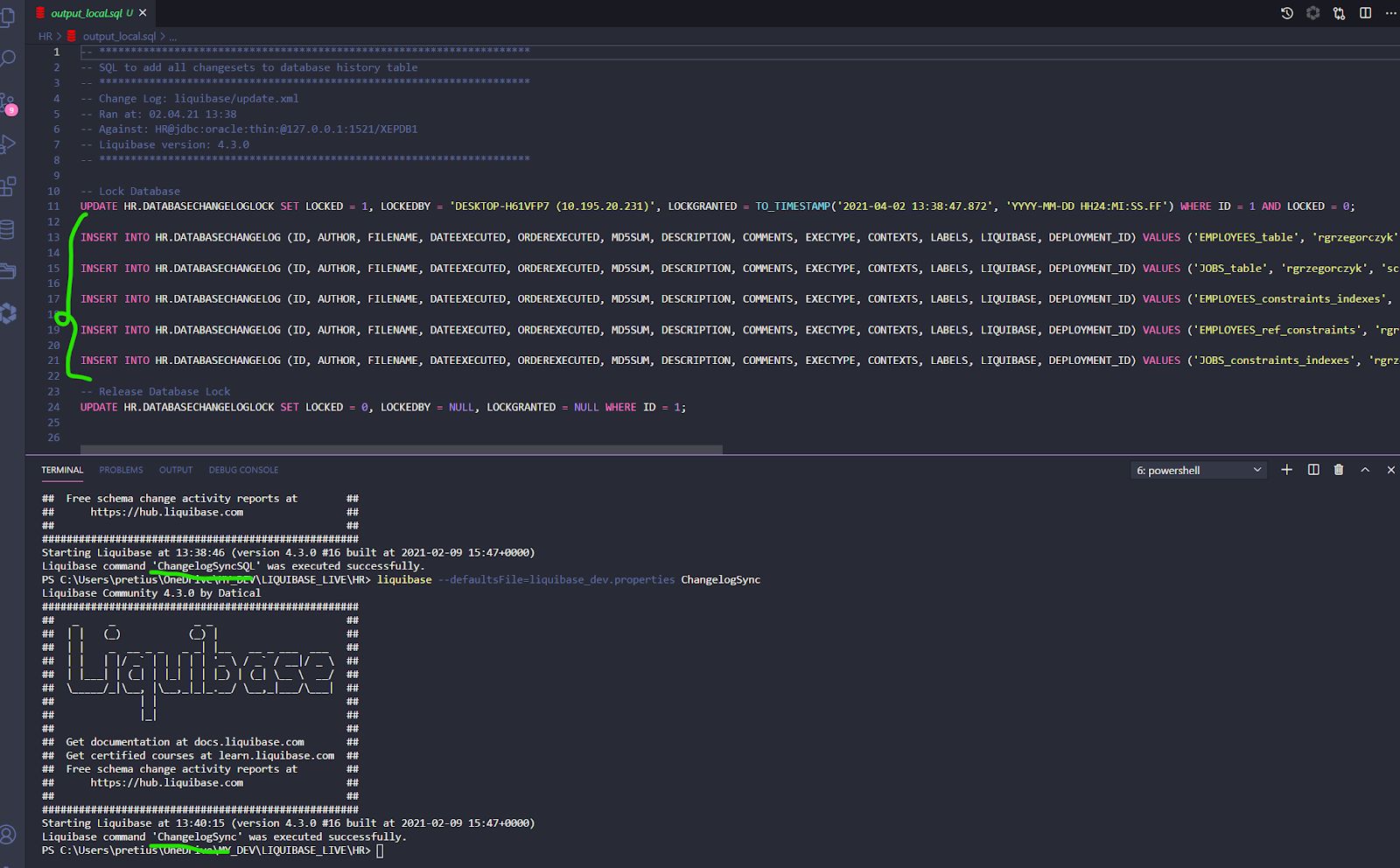 And voila! All done!

As you can see, by using Liquibase, you can track everything during your database change release process.

However, all developers should stick to this workflow:

Here we end the basic Liquibase tutorial. However, stay tuned for the next articles!

Published at DZone with permission of Rafal Grzegorczyk. See the original article here.