In this article, I will tell you a few things about sharding and explain why it is actually an important technique.

Despite its significance, sharding also has some cons, and there are certain problems you may encounter if you decide to use it. What are they? I’ll explain that below.

Before we dive in though, let's start with a recap of scalability and distributed systems.

Disclaimer: This article is focused on sharding as a concept in general, not on database sharding of any type.

What Do We Know About Scalability?

First things first: I’m pretty sure you know what scalability is, but let’s have a brief look at the definition just to be safe. Scalability is the ability, surprise, of a system or application to scale. It is probably one of the most crucial non-business features of every modern-day piece of code. After all, we all want our systems to be able to handle increasing traffic and not just crash the first chance they can.

So when we’re looking at scaling, there are two ways to handle that task — Horizontal and Vertical. I will dive deeper into this matter someday in a separate article, but for now, you can find an illustration and a quick recap below. 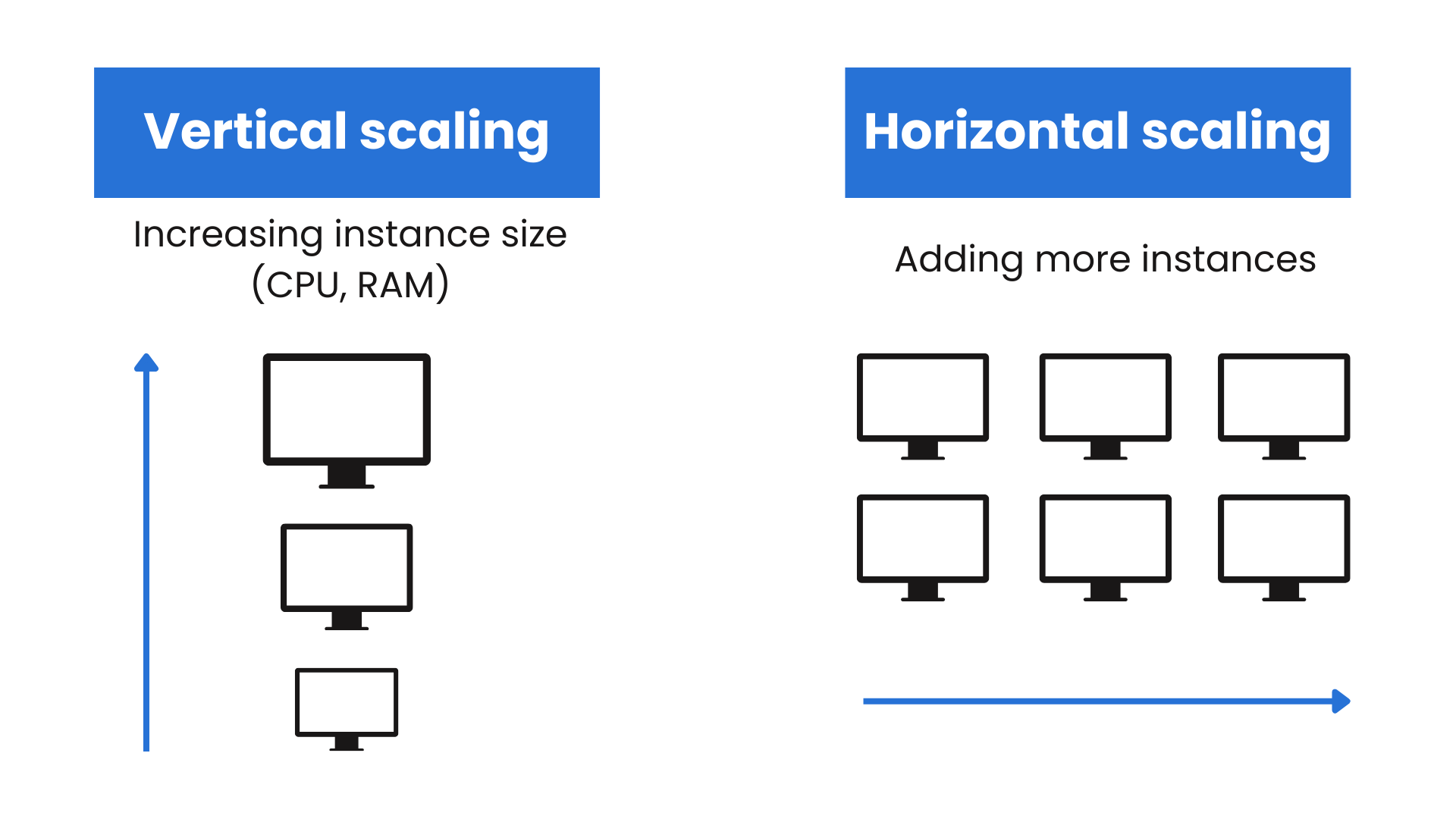 What Is a Distributed System?

Distributed systems are all systems that are spread across more than one node and connected over a network of any type. Work in such a system is split across all nodes existing inside the system. The nodes coordinate their efforts to be more efficient than a single-node environment.

The biggest advantage of distributed systems is the ability to scale horizontally by adding more and more nodes to the cluster (of course, such scaling has its limitations, you can read about them here). Additionally, such systems greatly reduce (or at least they should) problems with a single point of failure, helping to increase resilience and fault tolerance of the system.

Despite such advantages, distributed systems bring us to a whole new level of problems, especially since they significantly increase the complexity of software — occurring issues are more complex and errors become harder to recreate, we can start to notice that bandwidth of the internet connection is important, the network is not as reliable as we might expect, and that for sure the network is not secure.

Let’s start with a quick look at the dictionary definition of the word “shard”: a small part of a whole. By extension, we can expect sharding to be related with a splitting of some arbitrary whole into smaller parts. In a nutshell, it is exactly what sharding as a concept is about.

If you’re willing to go into more detail, sharding is about using some unique identifier known as a shard key to equally split some arbitrary set of entities like domain entities from DDD, actors in case of Akka, or data in a database into smaller parts known as shards. After sharding is done, we end up with each particular entity existing only in one shard and a particular shard existing only within one location.

What’s more, sharding can be viewed as a very specific type of partitioning, namely — horizontal partitioning. The main difference is that sharding explicitly imposes the necessity to split data into multiple physical machines while partitioning does not.

As a side note, I want to add that if you decide to use sharding, you should aim to have at most ten times more shards than nodes. A higher number of shards per node can indicate some flaws in design.

Having discussed a quick technical definition of sharding, we can now move on to explaining when to use it.

When to Use Sharding

Despite being a useful and powerful tool, sharding can also be a massive investment of time and as such, it should be carefully planned and considered.

Some of the essential factors that should drive the usage of sharding are:

The biggest pros of sharding is that it can isolate contention to a level of single shard. Sharding can also decrease the amount of distributed operations in our systems. Because each entity exists in only one place of the system, we effectively have to distribute only operations that involve entities on many shards.

Both reduction of contention and distributed operations can greatly increase the performance of our system as contention and cross-talk are two main factors that limit scalability –  if you want to explore this topic further, you can find more information in my article here.

The main issue with sharding is that it is a complex technique and requires a lot of thinking and planning to be implemented correctly. What’s more, because each shard is present in only one location, there can be times when one of the shards is unavailable due to some failure – which effectively reduces the availability of the system.

Last but not least, contention is not eliminated entirely. It is isolated to a level of a single shard and a portion of it is moved to another region of our codebase, for example, coordinator — a technical entity responsible for routing messages to the proper shard.

The biggest pro of hash-based sharding is that it greatly increases the chances of having evenly distributed shards. In comparison, when using range-based sharding, we can quite easily end up with hotspots.

On the other hand, if you are using hash-based sharding and decide to change the sharding algorithm or modify the number of shards, it can be a huge task. It will require redistribution of all the entities currently present in shards.

Another drawback of hash-based sharding is that closely related entities are more likely to be distributed on many shards instead of being put into a single one.

What Is a Shard Key?

It is a term used to describe a value or a field that is used to distribute entities into shards. It should allow for even distribution of entities across shards and, in a perfect scenario, also put closely related entities near one another — preferably on a single shard.

A poor shard key can result in hotspots — shards that are considerably heavier than others, poorly distributed entities — lots of distributed requests for data located on many different shards to return matching results.

How To Choose a Good Shard Key?

Choosing a good shard key is one of the most critical problems when using sharding — a poor shard key can outweigh all the potential benefits that sharding offers.

Below, I listed the most important factors that we should take into consideration when choosing a Shard Key:

Remember that only a good combination of all three parameters can guarantee the proper distribution of entities in our systems because any of these parameters on its own is not enough.

Sharding is a very powerful concept that can greatly increase our systems’ ability to scale while maintaining good, consistent guarantees. Unfortunately, it can also negatively impact the availability of our systems.

Additionally, while designing a system to support sharding, we should remember about selecting the right shard keys as they are crucial in how a sharded system will behave. Thank you for your time.