Present-day organizations have complex business requirements. The data can be in several locations. System migrations happen frequently due to technology changes. Integration happens with several platforms that are nowadays referred to as hybrid platforms. This article briefly describes the deployment types, why they have been implemented in such a way, their limitations, and how to overcome them using data synchronization with the help of WSO2 Streaming Integrator.

What Is Data Synchronization?

Why Do We Need Data Synchronization?

Hybrid Integration: Data can be on-premise as well as on a wide variety of cloud services such as AWS, Microsoft Azure and Google Cloud platforms. This is done due to the need to offload several operations to the cloud services. The process may involve enriching, filtering, transforming, and aggregating data before transferring it to the cloud services and vice versa, without interrupting or slowing down the business process. All this needs to take place in real-time while maintaining the accuracy and consistency of the data. 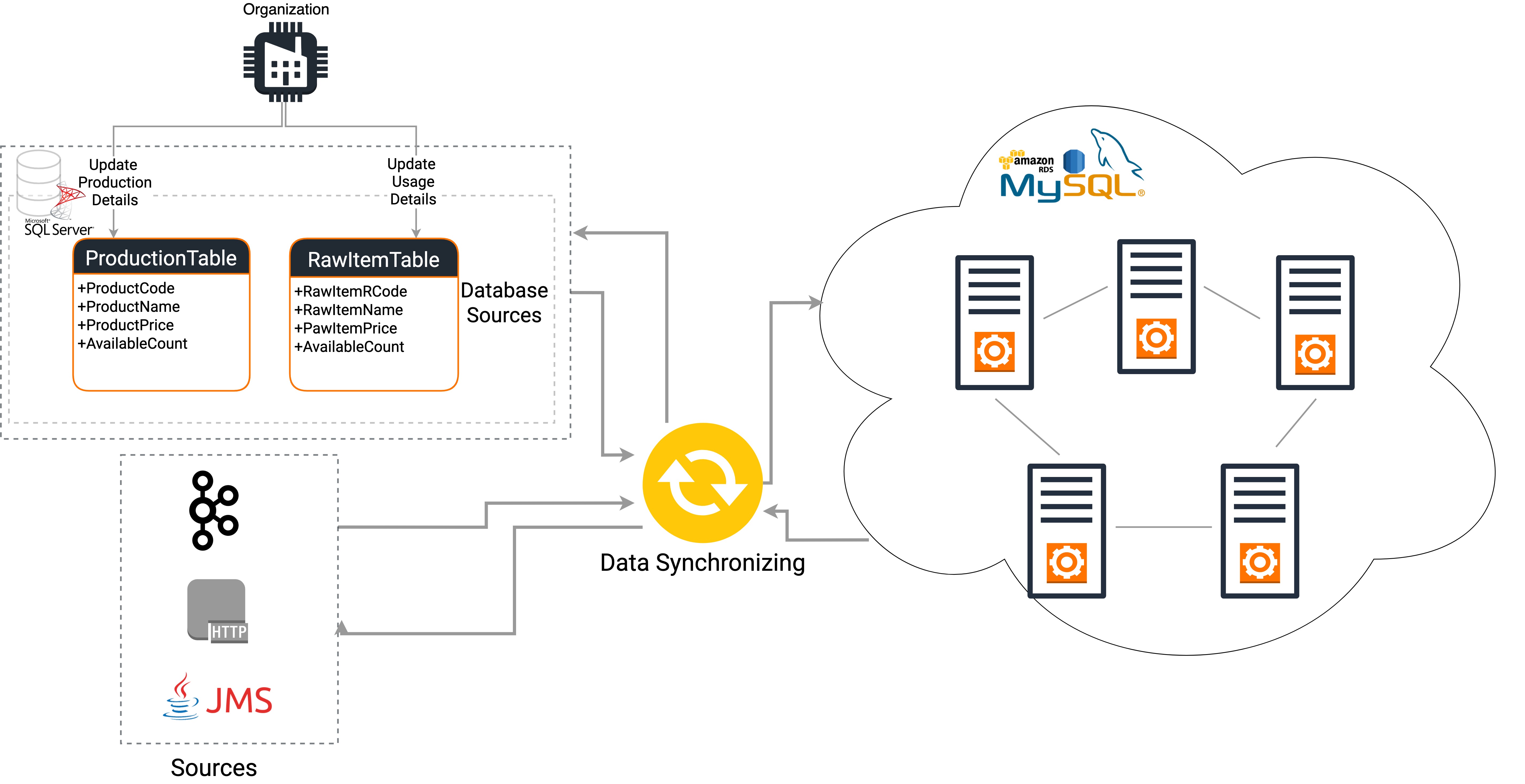 System Migrations: Another requirement of data synchronization is the intermediate state of a system migration (e.g., blue green migration) or in other words, when an organization has a legacy system running alongside with the new system. The legacy system dumps the data to a database or a file system, and there are other legacy systems that read and analyze this data. The new systems publish data via technologies such as Kafka, JMS, gRPC and HTTP, and the latest systems read and analyze this data. However, in order to ensure the consistency and accuracy of data for both legacy and new systems that read the data, a data synchronization mechanism should be available between the two systems. 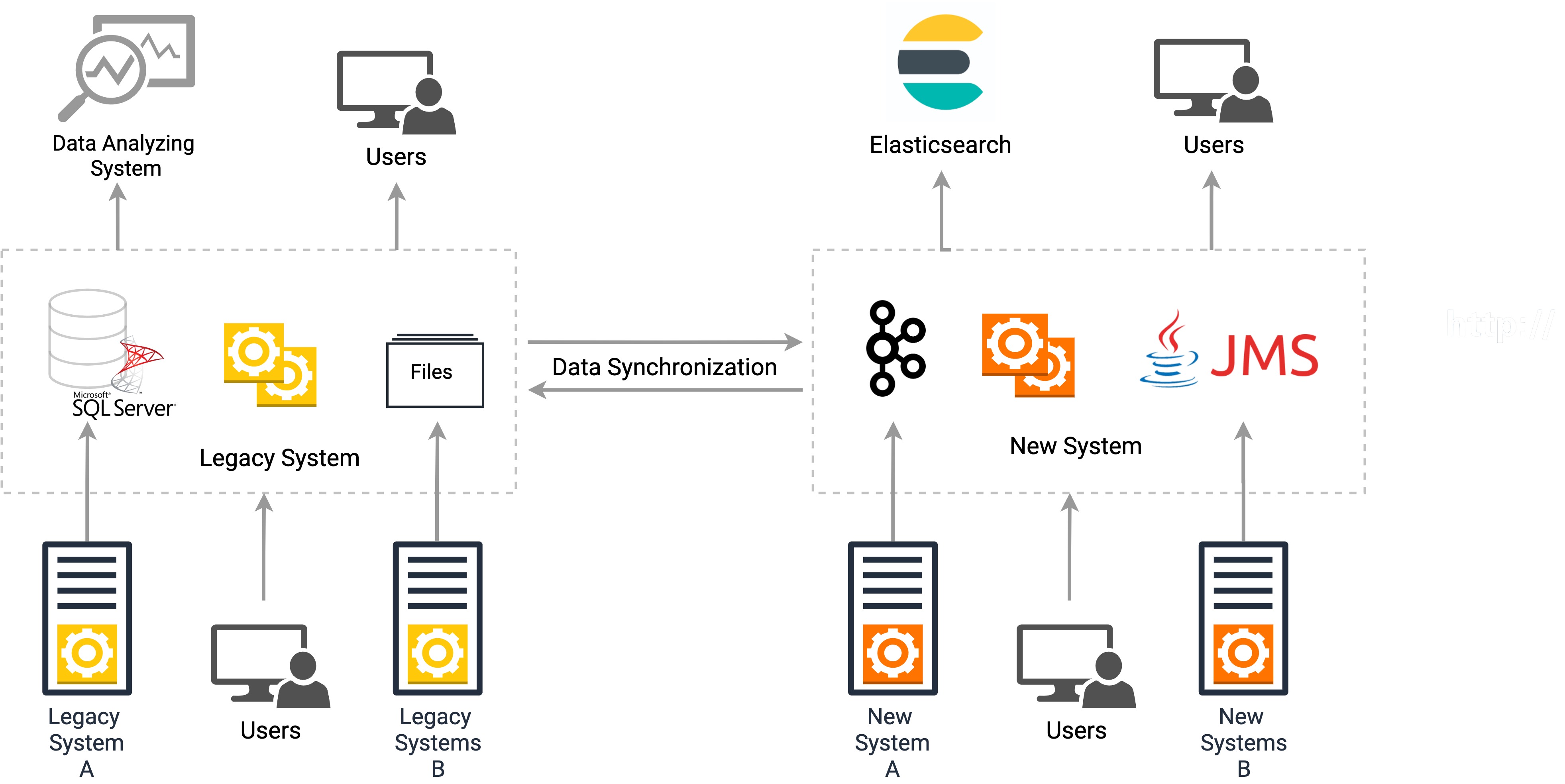 Business is now distributed globally: Organizations tend to have data distributed geographically for multiple purposes. These include running the business internationally, maintaining low latency, reducing network usage cost, and achieving high availability. When an update happens in a given system of a different region, it has to be also reflected in systems that are located in other regions. For an example, when a new product becomes available, that particular information should be available in all the regions even though the region-wise data instances are different. 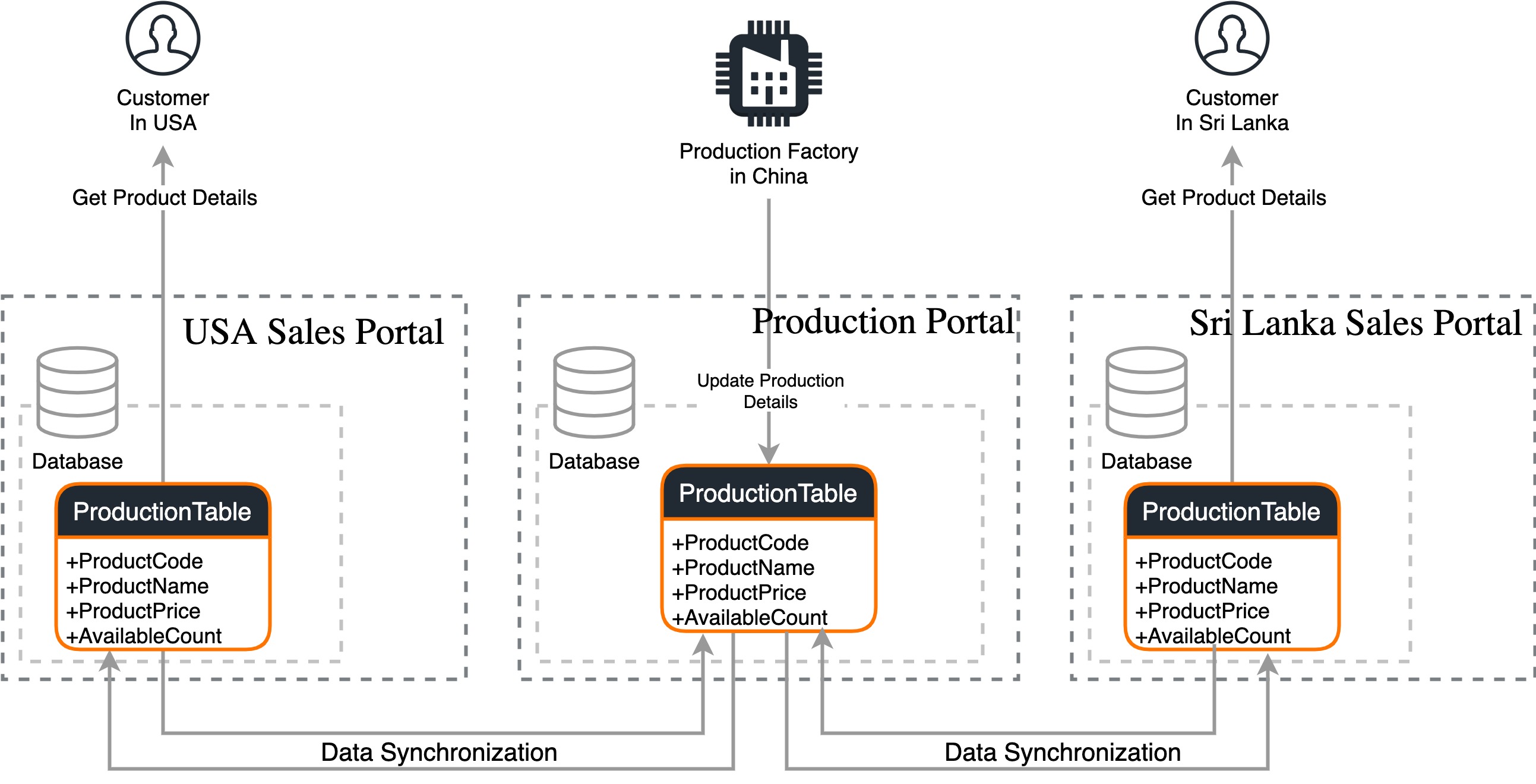 Security: Organizations need to differentiate the data that can be accessed by different parties due to security issues. A production department may want to provide the data to be accessed by the customers. Also, there will be reads (viewing available products) and writes (placing orders) to the data, which the organization expects to keep separately due to security concerns.

How to Do Data Synchronization?

Some of the techniques used to retrieve the data for the synchronization are as follows.

WSO2 Streaming Integrator is powered by Siddhi IO, which is an in house stream processing engine that is designed to process complex events in real time.

WSO2 Streaming Integrator achieves this via the usage of various data mappers (JSON, Text, Binary, etc.) available in Siddhi. Siddhi queries can also transform data to any given definition by adding or removing attributes to the data.

Siddhi fault stream has been implemented to gracefully handle failover scenarios that occur during runtime.

When implementing the sources and sinks, the security measurements have been taken. For an example, you can can enable basic auth and enable key-stores, etc., using parameters in siddhi-io-http when it is connecting to endpoints.

Regardless where your data is being held, the WSO2 SI can be deployed in K8s, Docker (for example, check my blog post Deploying WSO2 Streaming Integrator on AWS ECS in Minimum HA Mode) or in VMs, and operate seamlessly

WSO2 SI publishes statistics from its sinks and sources to Prometheus allowing them to be later visualized via Grafana dashboards. 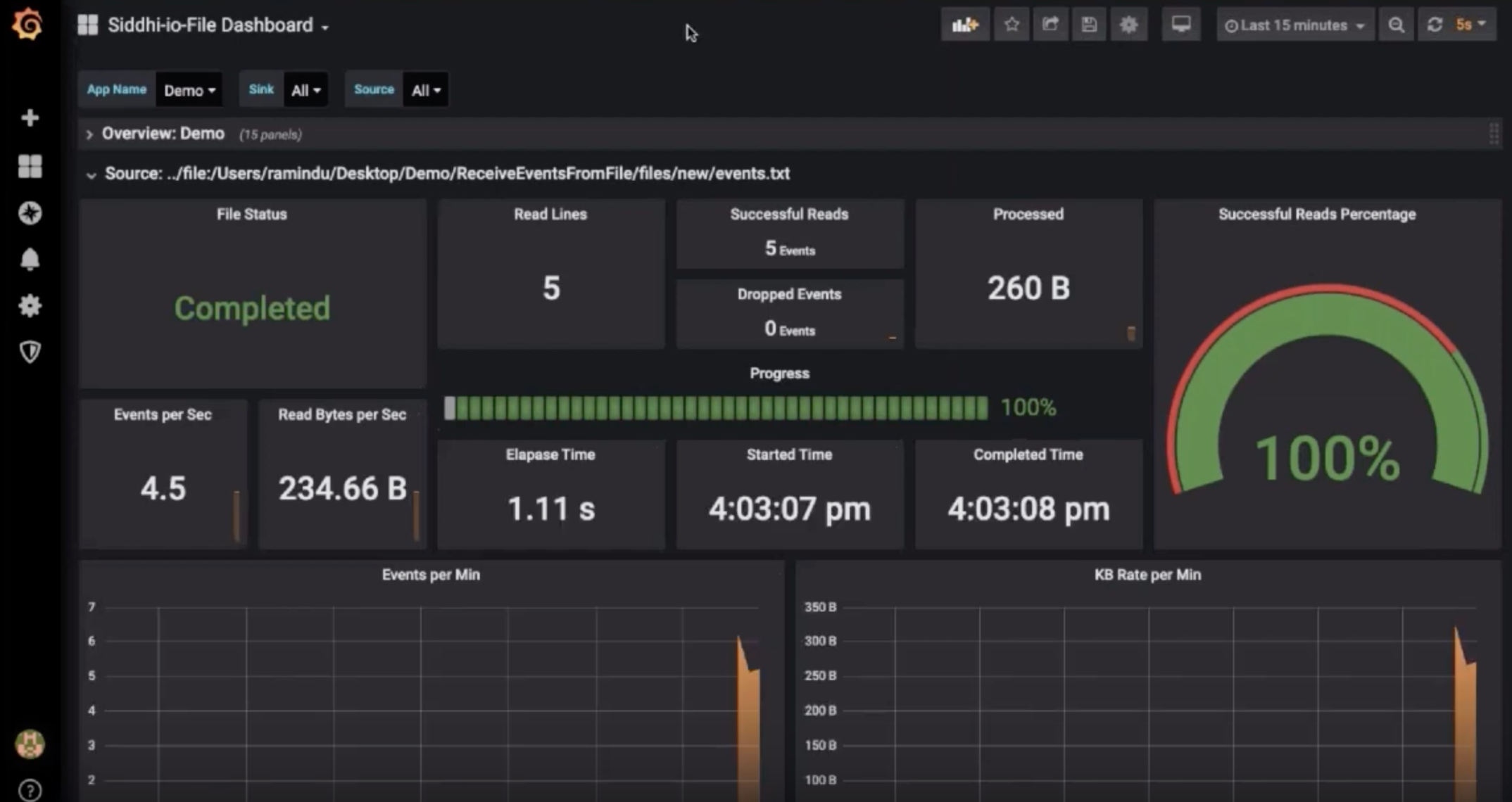 Let's see how WSO2 Streaming Integrator caters to the data synchronization requirements using a simple scenario which is mentioned in our second use case (System Migrations).

Let's eliminate all the publishing and receiving parties from the deployment and simplify the last diagram, and see how the data synchronization can be done.

In order to keep both systems in synchronization, the changes happening in the database and file systems should be transferred to the Kafka server and via HTTP to the new systems. When the new system receives events via Kafka and HTTP, those have to be added to the databases and file systems that are used by the legacy system. We also need to take the data formats used by the two systems into consideration when syncing the data.

According to our use case, this covers how to synchronize data from the legacy system to the new system.

The siddhi-io-file source is used with  the line mode by enabling tailing, so that each and every update of a file can be captured and sent to the Streaming Integrator for further processing. Due to the change of event definition used by the Kafka consumer at the other end, Query1 does what is necessary to change the event to adhere to the event definition (maybe by adding a timestamp) before sending it via the siddhi-io-kafka sink.

The siddhi-io-cdc extension’s source can be used with `listening` mode to get the latest changes in near real time (`pooling` mode can be used with a user given interval if needed for the databases that do not support the listening mode). Since the data format has not changed in the new system, the same data can be sent without any changes via siddhi-io-jms sink.

When addressing our use case, this covers how to synchronize data from the new system to the legacy system.

A siddhi-io-kafka source listens to the same topic which in turn listens to the new system, and converts the event to the event definition format that adheres to the legacy system’s file events. Query1 does what is  necessary to change the event to adhere to the event definition (maybe by removing the timestamp) and appends the output to the particular file via siddhi-io-file sink. This file is then read by the legacy system.

A siddhi-io-jms source listens to the same topic which in turn listens to the new system, converts the event to a data definition format that adheres to the legacy system’s database format, and stores the output in the database via siddhi-store-rdbms.

The same way, WSO2 Streaming Integrator can receive events via HTTP, TCP, gRPC, RabbitMQ, IBM MQ, Thrift and Binary protocols using WSO2Events, Databases, Files, Web-sockets, Amazon S3, Google Cloud Storage(GCS), etc., regardless of whether the type of the source is streaming or static, and then use the relevant sinks (either streaming or static) to synchronize the received data.

This article discusses the need for data synchronizing due to the increasing use of hybrid platforms, systems being globally distributed, security, and ease of maintenance. Then it explains how to perform data synchronization via WSO2 Streaming Integrator while overcoming its challenges.